12:05 AM | Inventing the Fighter of Monsters

By the time you are reading this in the weekend paper—probably on a Palm Sunday afternoon at the tail end of the second year of the pandemic—I would most likely be at Dakong Balay Gallery along Rizal Avenue tending to social anxiety brought about by a book.

It is not just any book.

I’ve authored this one, the fourteenth title in my so-so career as a literary artist, but it is my first children’s book that’s actually being published in a major way.

It’s titled The Great Little Hunter, published in a deluxe edition by Pinspired Philippines—hardbound with gorgeous illustrations—purposefully on a limited printing run: a combination of a children’s book and an art book. And I’m proud of it. The way one becomes proud of something finally made tangible after dreaming about it for so long. It took almost four years for this book to come to being, and when I think of all that time passing, I marvel at the intricate ways with which things come into being. They don’t always coalesce, despite the best of efforts, so when they do, you marvel. 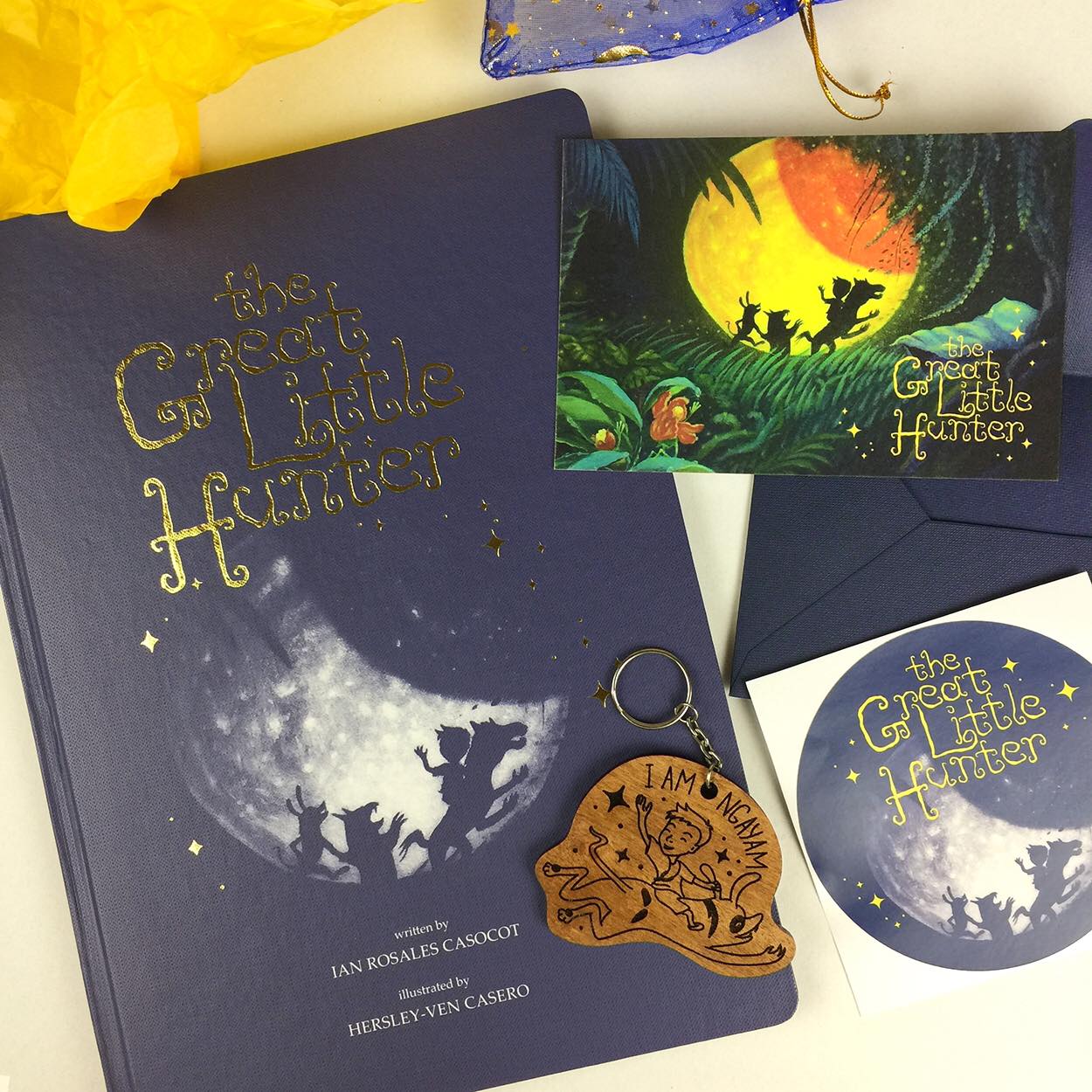 I’ve written other children’s stories before. In 2006, my children’s book Rosario’s Stories was an honorable mention finalist at the PBBY-Salanga Writer’s Prize—the country’s top award for children’s literature—in a year when no one copped the actual prize. The great artist Jomike Tejido actually had illustrations ready-made for that book, but I didn’t submit it anywhere for publication. Not then. I told myself I was not ready.

In 2007, another children’s story, The Last Days of Magic, won a prize at the Palanca Awards—and this story would have tremendous legs, quickly becoming a staple in grade school textbooks in Philippine schools, and would actually be translated to Vietnamese by the wonderful writer Nguyen Phan Que Mai in 2017. She would later include it in her 2018 anthology Bay Lên (Taking Flight), together with stories by Junot Diaz, Margaret Atwood, Bina Shah, and others. This story never came out as a standalone children’s book, however—although I included it in my collection Heartbreak and Magic, which came out in 2012. It is probably my most popular children’s story. 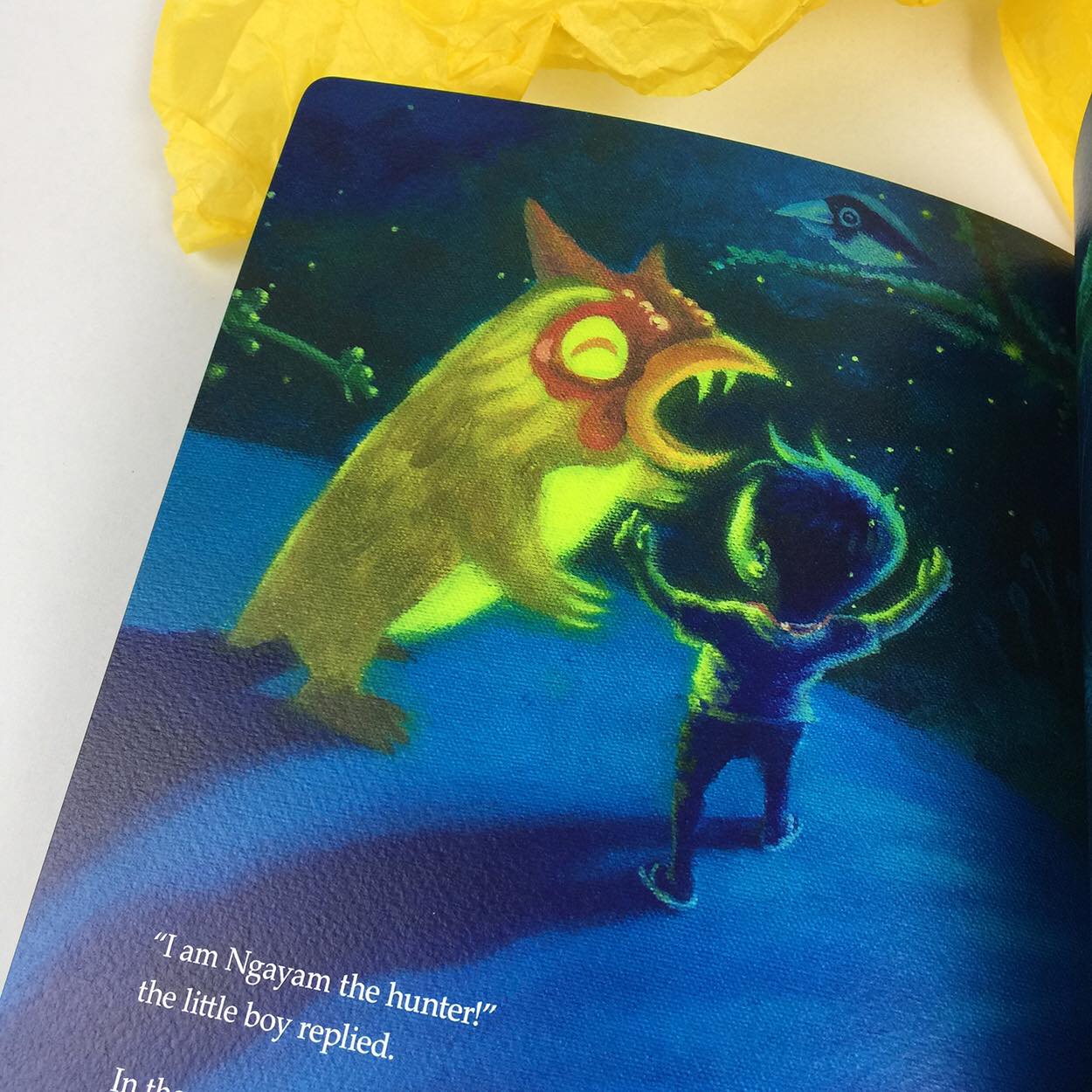 In 2018, I tried shopping around a personal anthology of unpublished children’s stories to one or two of the major children’s book publishers in the country. I was told by one publisher they were not taking in such a format, especially for a manuscript written in English. Apparently the market leaned heavily towards those written in Tagalog—but then, a month or so later, that same publisher put out exactly the same kind of book, written in English, by another writer. What does one do? I shrugged and took that as pure publishing disinterest. You win some, you lose some. Such is a writer’s life.

So I privately published that personal anthology myself, which I titled The Boy, The Girl, The Rabbit, The Rat, and the Last Magic Days, in a very limited run—which quickly sold out. I never got around to doing a second printing run. It exhausted me.

It’s not easy to write for children [not even teenagers], but there is something about the genre that appeals to me in a masochistic way. It has set parameters in terms of language and vocabulary, word count, and appeal—and demands a very different way of telling a story, mindful that the intended audience is composed of children, but also mindful that it is never a good idea to underestimate this audience’s comprehension and sophistication. I continue to write children’s stories as an intricate challenge of particular storytelling. I am not alone in this regard. Some of my favorite children’s authors—the great Maurice Sendak, for instance—have the same mindset.

It was around that time—the summer of 2018, to be exact—when I started writing a short children’s story meant to be a picture book. I was teaching a workshop in writing children’s stories, and I wanted a chance to get away from my students’ efforts and put out something of my own. I also wanted to join an international contest—but writing the story I wanted to tell felt paramount.

I wanted it to be about a boy confronting his fears, and becoming triumphant in the end. That is the hope, isn’t it? To prevail versus the darkness?

But I’ve never done a picture book story before, which has its own very specific demands—mostly word count, and almost haiku-like in narrative brevity. How does one tell a satisfying narrative arc in less than 500 words? I’m notoriously a wordy writer, but I’m also notoriously a masochist when it comes to literary challenges. I often like writing in a mode I am most uncomfortable with; it stretches my writing muscles.

I spent three consecutive days in a café, drinking my usual latte and crafting the tale of Ngayam. It became The Great Little Hunter, a story of a boy whose fearful fantasies triggered by the moon conjure a dark jungle in his bedroom, and he soon encounters some of Philippine lower mythology’s dreadful monsters—a wak-wak, a sigbin, and a tikbalang. Shades of Sendak here, but transplanted in the texture of local culture, of personal struggles.

The story done, I knew I wanted an illustrator who best understood me and what went on in the recesses of my imagination. There was no other artist to tap except Hersley-Ven Casero. 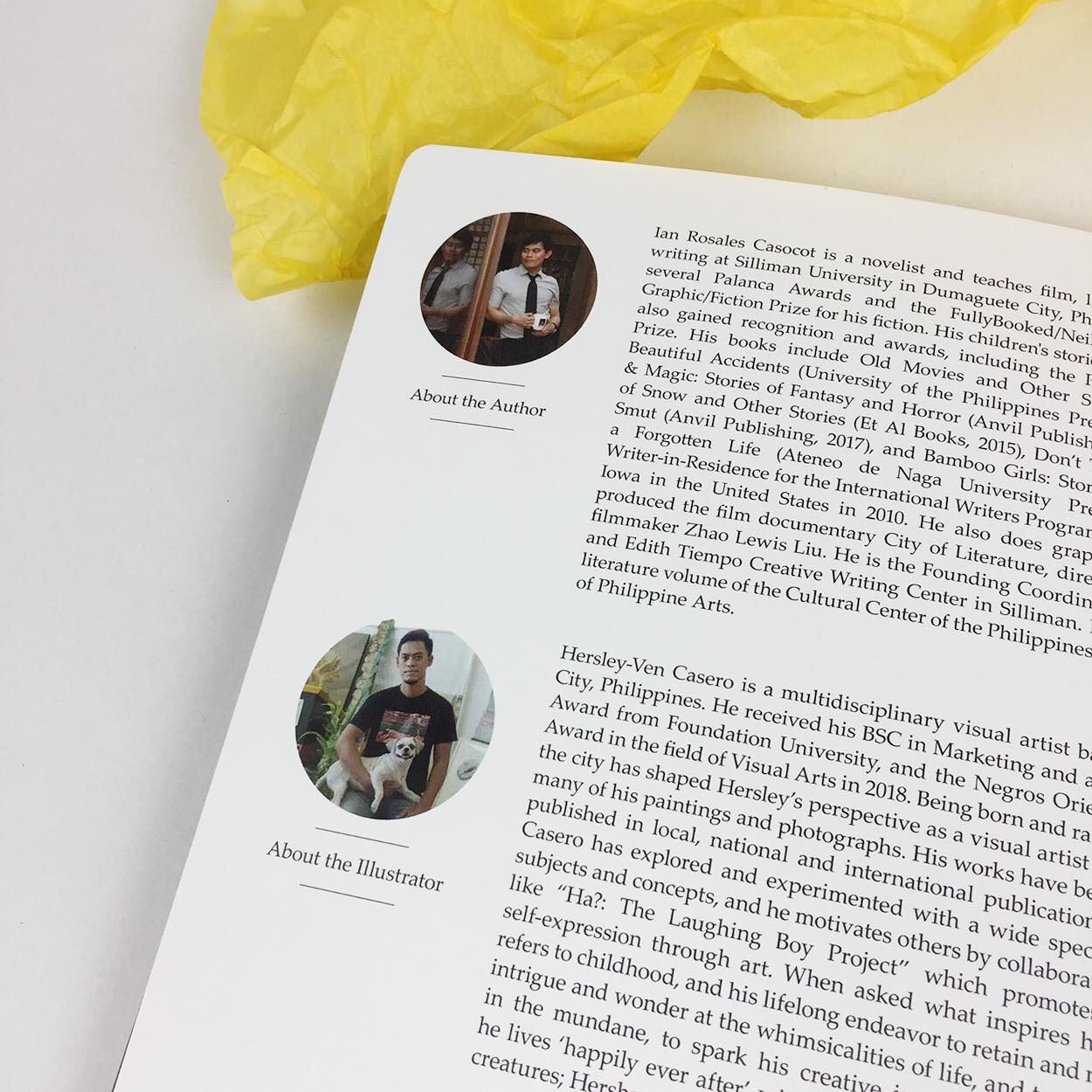 Hersley and I go a long way back. I first knew of him sometime in the mid-2000s when MetroPost presented me with a Christmas gift: a pencil portrait of myself drawn by him. [But I thought “Hersley” was a girl’s name.] I loved the portrait, sought out the artist—who turned out to be a wunderkind based in Foundation University. He was prolific, churning out art and photography with the energy of a creative virtuoso. It was not long before I took up the challenge of curating an exhibit of his photography, together with that of John Stevenson’s, at the Silliman Library Gallery—in a 2008 show [Dumaguete Light and Dark] that compared and contrasted various views of the city both in vibrant color [Hersley’s] and in somber black-and-white [John’s]. That exhibit cemented a long-term relationship of artistic collaborations—and I’m proud to say that I am perhaps the one art critic constant in my championing of his work over the years.

In 2011, for the release of my second major fiction collection, Heartbreak and Magic, published by Anvil—I tapped Hersley to do the illustrations that heralded every story in the book. The works he submitted were astonishing, and so when it came to launching the book in Dumaguete, I broached the idea of doing both a book launch and an art exhibit, showcasing not just the illustrations Hersley made for the book but also gathering together all the art pieces and paintings he had made by then, which I curated. The resulting show, Uncommon Ordinary Magic, would also mark a turning point in Hersley’s artistic career: it was to be his first solo exhibition as an artist.

In the summer of 2018, after I extended to him my invitation to come on board as the illustrator for The Great Little Hunter, Hersley—who was already busy doing many commissioned work and preparing for various exhibitions—became possessed by the story, at least according to what he later told me. Ngayam possessed his imagination, and so, in a stretch of several consecutive days and nights [almost going sleepless], he set about putting the world of Ngayam’s fantasies on canvas.

The resulting seventeen paintings were [and are] exquisite. Each canvas, embued in rich shades of color, told separate segments of Ngayam’s story. But taking the inspiration [and form] of an unfolding tale, each canvas he made also became pieces of an interconnected visual narrative, each picture spilling into the next with almost magical continuity. The paintings taken together become like a scroll from beginning to the end, and even the last canvas connects in an organic way to the first, making an infinite loop of a magical story. I was enamored by what Hersley had done.

But everything remained in a standstill for two years after. Only in March 2021, right smack in the middle of the pandemic, did things start to move again. The principle reason for things being set in motion once more was the entry of Evgeniya Spiridonova—Jane to friends—into our lives. Having made Dumaguete home all the way from Russia, she—together with husband Max Vasiliev—have created a small but thriving empire devoted to all things imaginative and creative in Dumaguete. They have an escape room and a VR gaming salon with Outpost031, and they have a postcard, stationery, and art shop with Pinspired Philippines. Their first venture into local publishing was putting out a book of Hersley’s street photography titled All in Good Time, which was wildly successful, inviting several print runs. Jane saw our manuscript, and signed on as publisher right then and there.

It was good to have someone captain this ship, especially in fraught times. I had to deal with my mental health in the ensuing months, and having Jane on top of things made me feel safe, as I found myself unable to deal with the nitty-gritties involved. I am extremely thankful to my partner Renz Torres for acting as my agent [and my working brain and sanity] throughout the entire process of publishing this book. And I am sure that Hersley is equally thankful to his wife, the filmmaker Toulla Mavromati. In that regard then, The Great Little Hunter has been a labor of love, in all sense of that word.

What lesson can we—especially me—take from Ngayam’s tale? That it is okay to venture out into the despairing dark and confront what you fear. Your triumph however is in befriending those very monsters, acknowledging them as being part of who you are. I take this as my pandemic story, as my mental health struggle story, as my coming-of-age story.

I do hope you get a copy of this book. It should be available at the Pinspired shop at Dakong Balay along Rizal Avenue, or online at pinspired.ph. This story has been a gift to me and to Hersley, and I hope it will mean the same to everyone who will read it and marvel at the pictures. 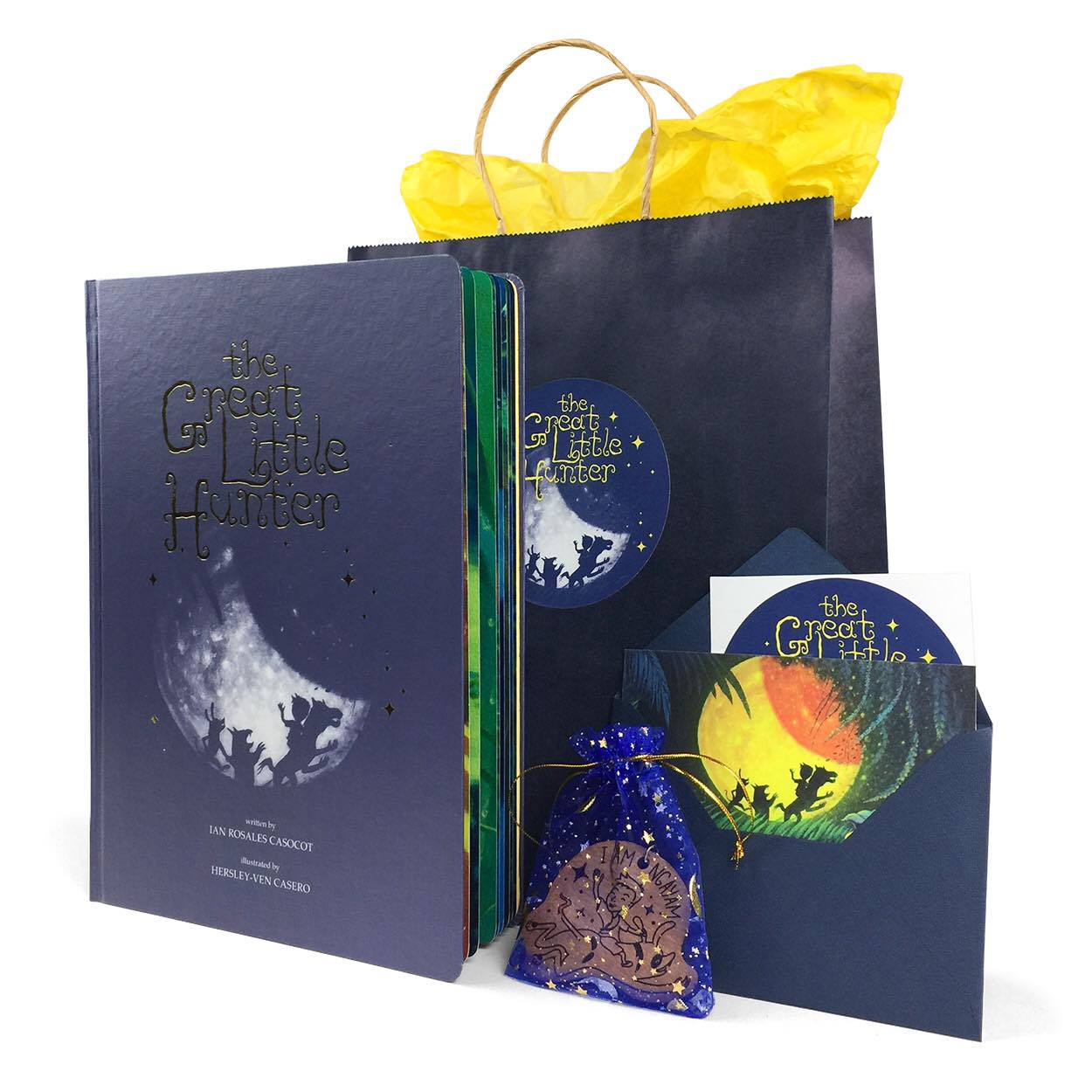 The book and art launch of The Great Little Hunter is slated on 10 April 2022, Sunday at 3 PM at the Dakong Balay Gallery, Rizal Avenue. The exhibit will run until April 24. The book, which comes with an assortment of freebies, is available at Pinspired.ph.