5:27 PM | What I Love About the Dumaguete Booth at the 2022 Buglasan Festival

If you ask me, what I love about the Dumaguete Booth at the 2022 Buglasan Festival is the fact that the entire thing is essentially a tribute to the city’s heritage of culture and the arts. [Full disclosure: I am responsible for the design of the various labels featured in the displays, as well as for the various short essays featured around the venue, which I will be incorporating in this article. I am not, however, involved in the conception of the booth itself.] 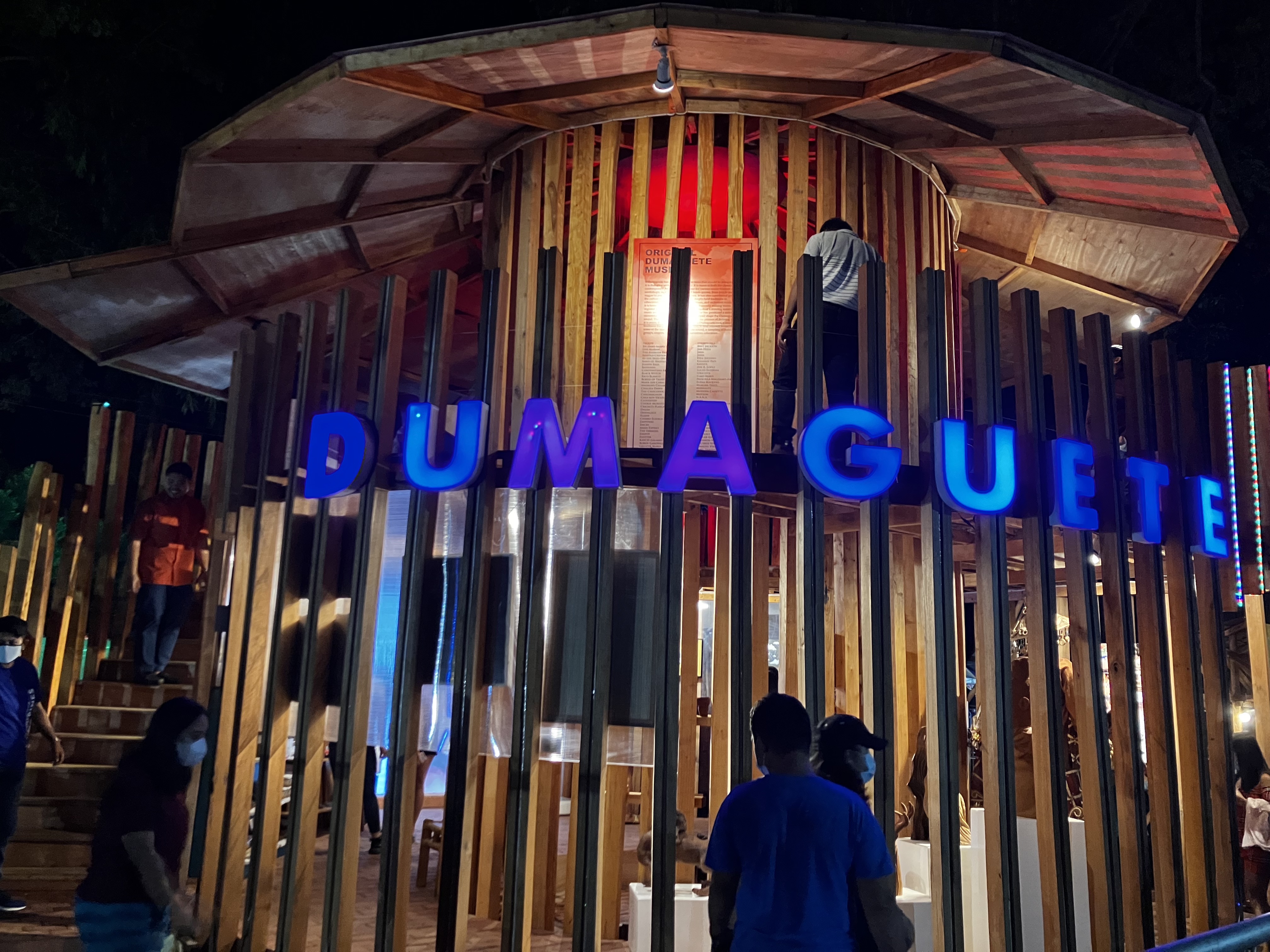 The Dumaguete Booth is inspired by the old kiosk at the M.L. Quezon Park, which was built in the 1930s. The booth is designed by GLI Architects.
The booth’s structure, designed by GLI Architects, is a modern recreation of a local architectural beauty now long gone: the kiosk of old M.L. Quezon Park, which was built in the 1930s, but was replaced with a larger structure sometime in the late 1990s, which exists at present. The old kiosk served as a bandstand for various cultural events in the old town of Dumaguete. It was the centerpiece for the town plaza, and served as its heart, and a reminder of Dumaguete’s heritage and history.

The fact that City Tourism Officer Jacqueline Antonio chose this historical part of Quezon Park to represent Dumaguete at the Buglasan feels right, because the plaza itself is not only the veritable center of the city, it is also the true mark of confluence in terms of Oriental Negrense history. The plaza occupies the space between the Cathedral of St. Catherine of Alexandria [the original foundation of which was built in 1754] and the Presidencia [built in 1937 by renowned Filipino architect Juan Arellano], and by its very location has been witness to the historical upheavals and progress of Dumaguete at the height of both Spanish and American colonial rules. It was in this space, for example, that Don Diego de la Viña and his men settled when they arrived in Dumaguete from Guihulngan on 24 November 1898, completing the liberation of Negros Oriental from Spanish rule. Here they hoisted the flag of the Republic in front of the nearby convento, while the men rang the bells of the church tower in jubilation.

Formerly a field of weeds, and then a corn field, and finally a makeshift plaza between the casa tribunal and the Catholic Church, Quezon Park was formally dedicated in the afternoon of 17 September 1916 with the firing of cannons, speeches, music, and refreshments—marking a year of rapid progress in Dumaguete. [By November 16, electric lights were turned on in Dumaguete for the first time.] Quezon Park was refurbished under the direction of Sr. Juan Posadas, transforming the area into recreation grounds with green lawns, gravel walks, flower beds, and concrete benches. It was named after the statesman Manuel L. Quezon, even before he became the President of the Philippine Commonwealth in 1935. This was in honor of his efforts in the passage of the Jones Law, or the Philippine Autonomy Act, in 29 August 1916. Quezon had been one of the Philippines’ two resident commissioners to the U.S. House of Representatives, and had drafted at least two versions of the Jones Bill. Quezon would make frequent visits to Dumaguete in the ensuing years, developing a close relationship with the place. After World War II broke out in the Pacific and the Japanese Occupation began, Quezon and members of his family, and their military escorts, slipped off to safety in Australia from the port in Dumaguete by submarine on 6 March 1942. 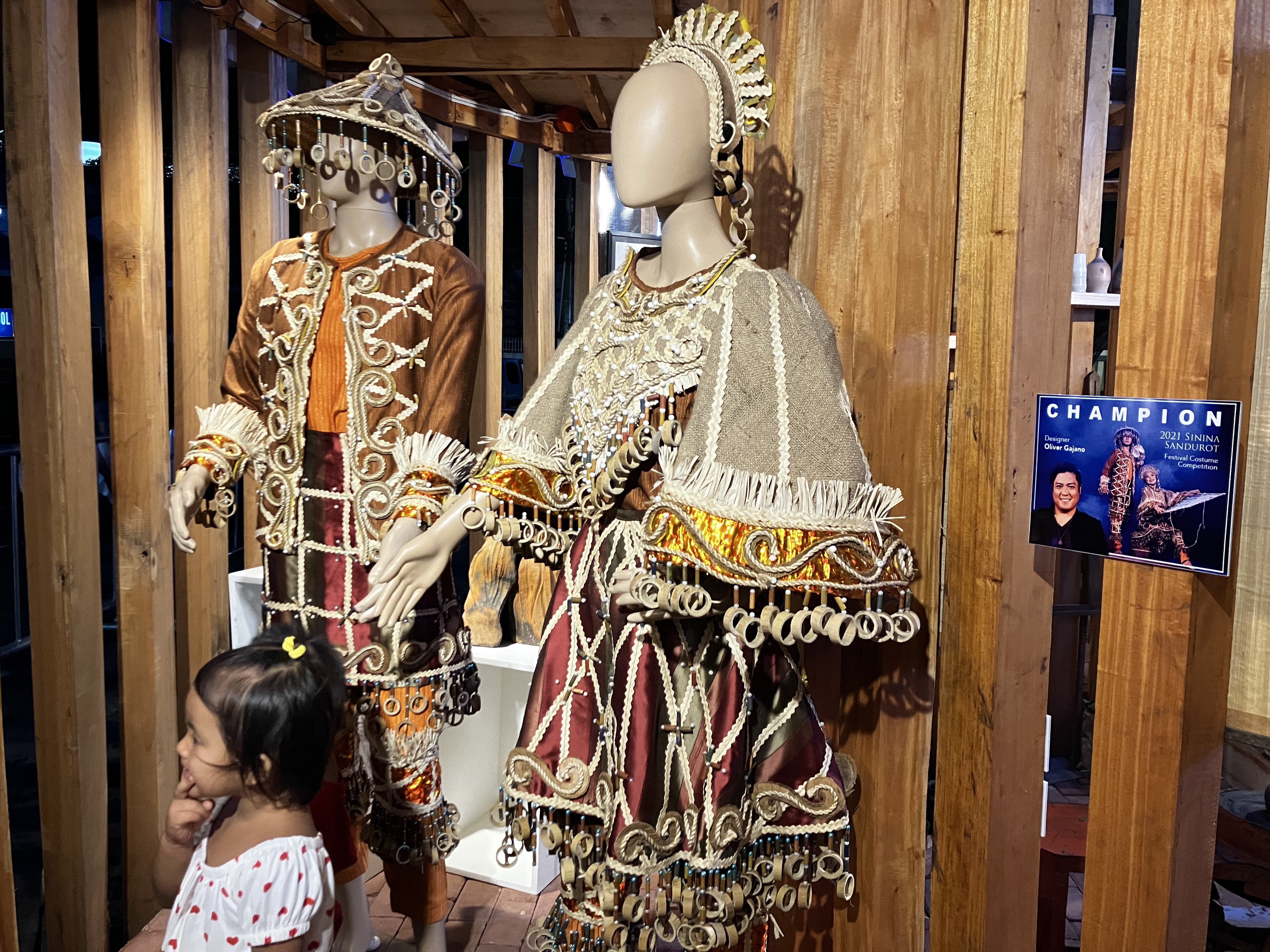 The winning design of Oliver Gajano for the Festival Costume Competition of the 2021 Sinina Sandurot.

Going beyond this historical significance, we enter the Dumaguete Booth with a nod towards the costume and fashion arts—with a display of the winning design of Oliver Gajano for the Festival Costume Competition of the 2021 Sinina Sandurot. The costume is all of a piece with its intricate layers and accessories made from native materials, which try to refine the looks of Dumaguete’s premiere festival. 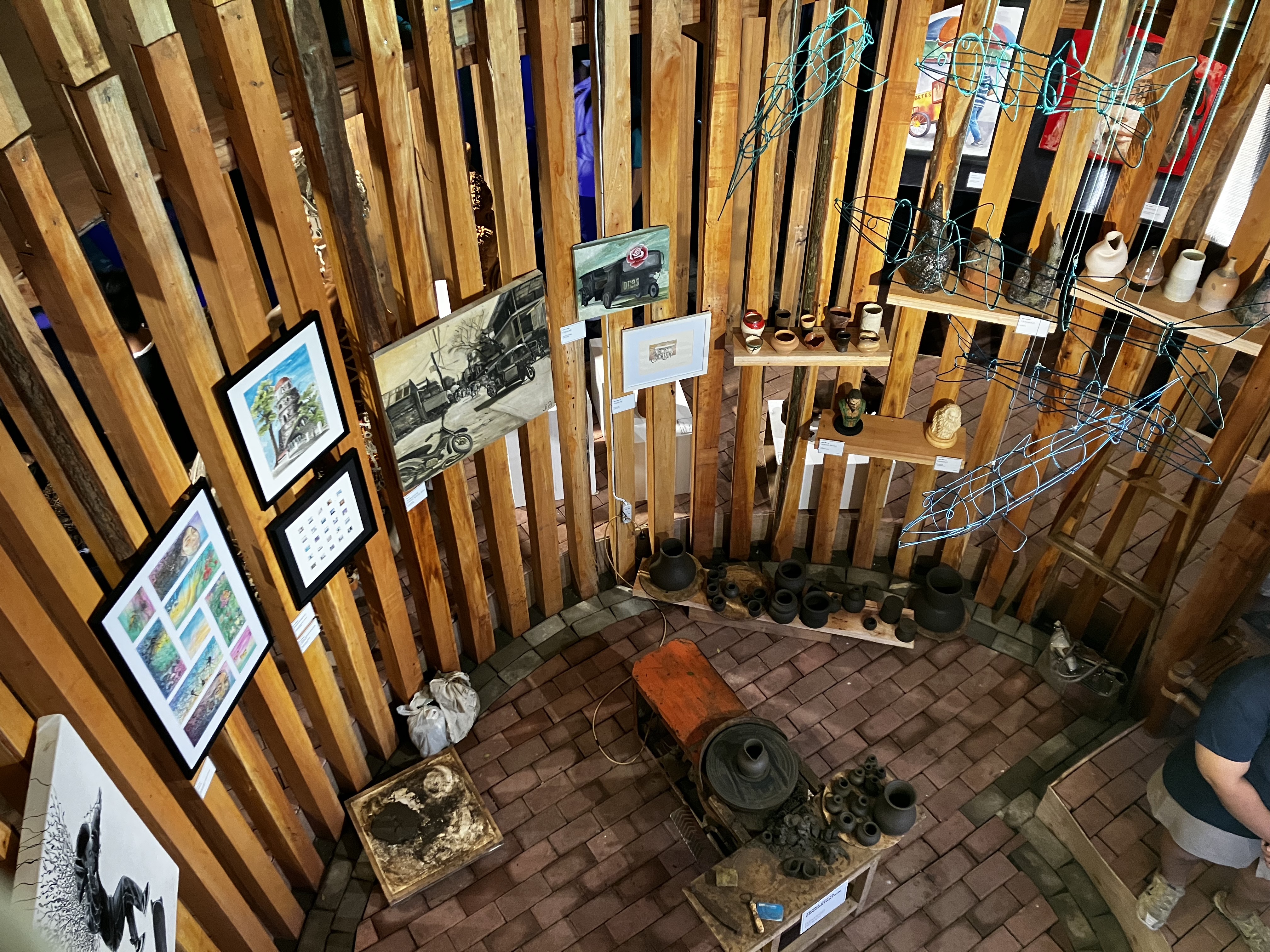 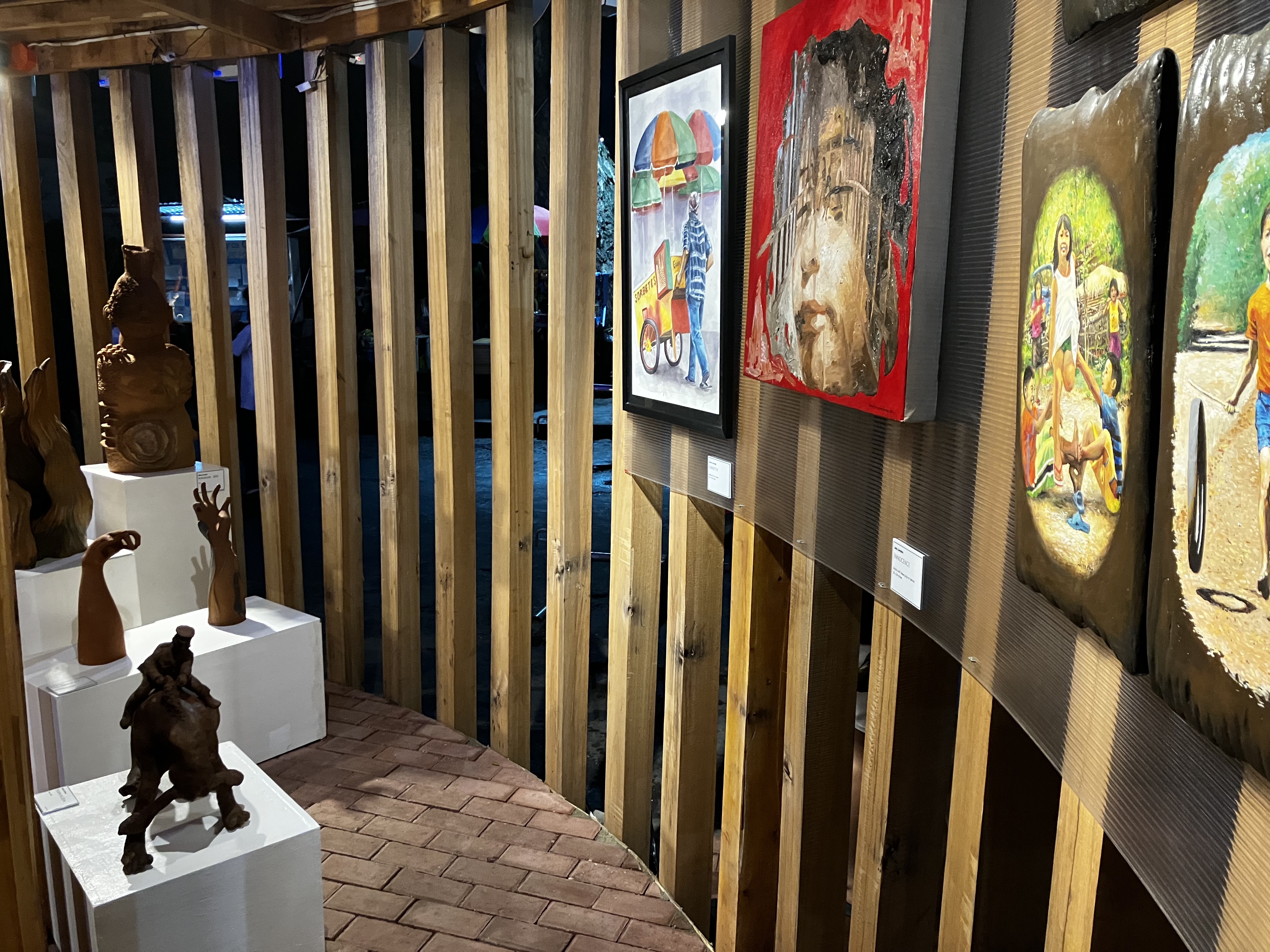 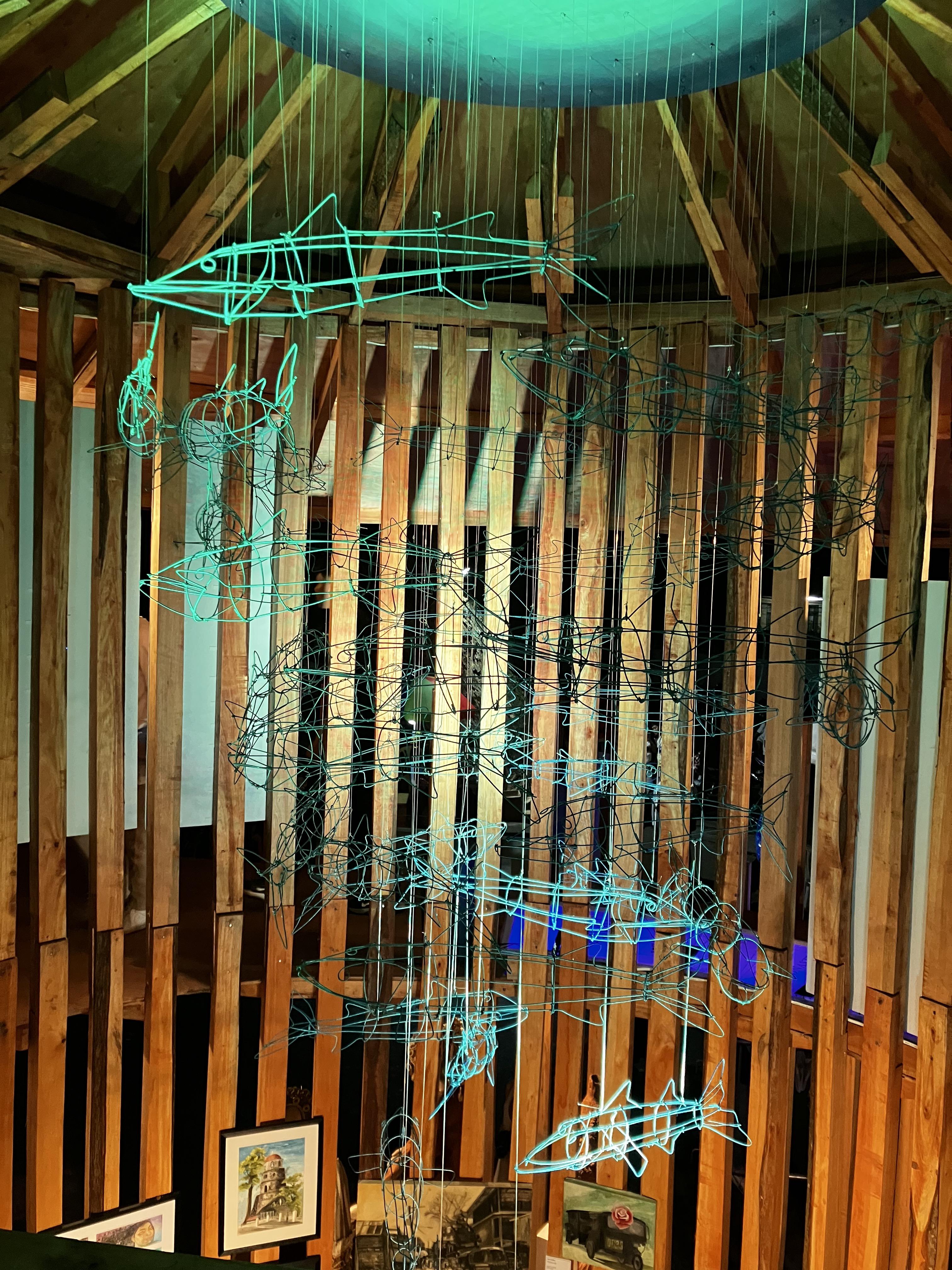 The pieces occupy the central portion of the Dumaguete Booth, a display space that projects upwards and is crowned by a sculptural work, “Barracuda Whirlpool,” intricately made from hanging wires by artists Alta Jia, Julbert Ramos, Beshiel Mayordomo, Jemuel Cubalan, and Flomil Rey Labarento, with assist from An Marjo Banagua and Jude Millares. The work is inspired by the Banilad Marine-Protected Area, which is located in Barangay Banilad, and which is sometimes called Barracuda Alley because inventory of marine species at the site shows abundant schools of barracuda. (This MPA is a favorite among seasoned divers.) 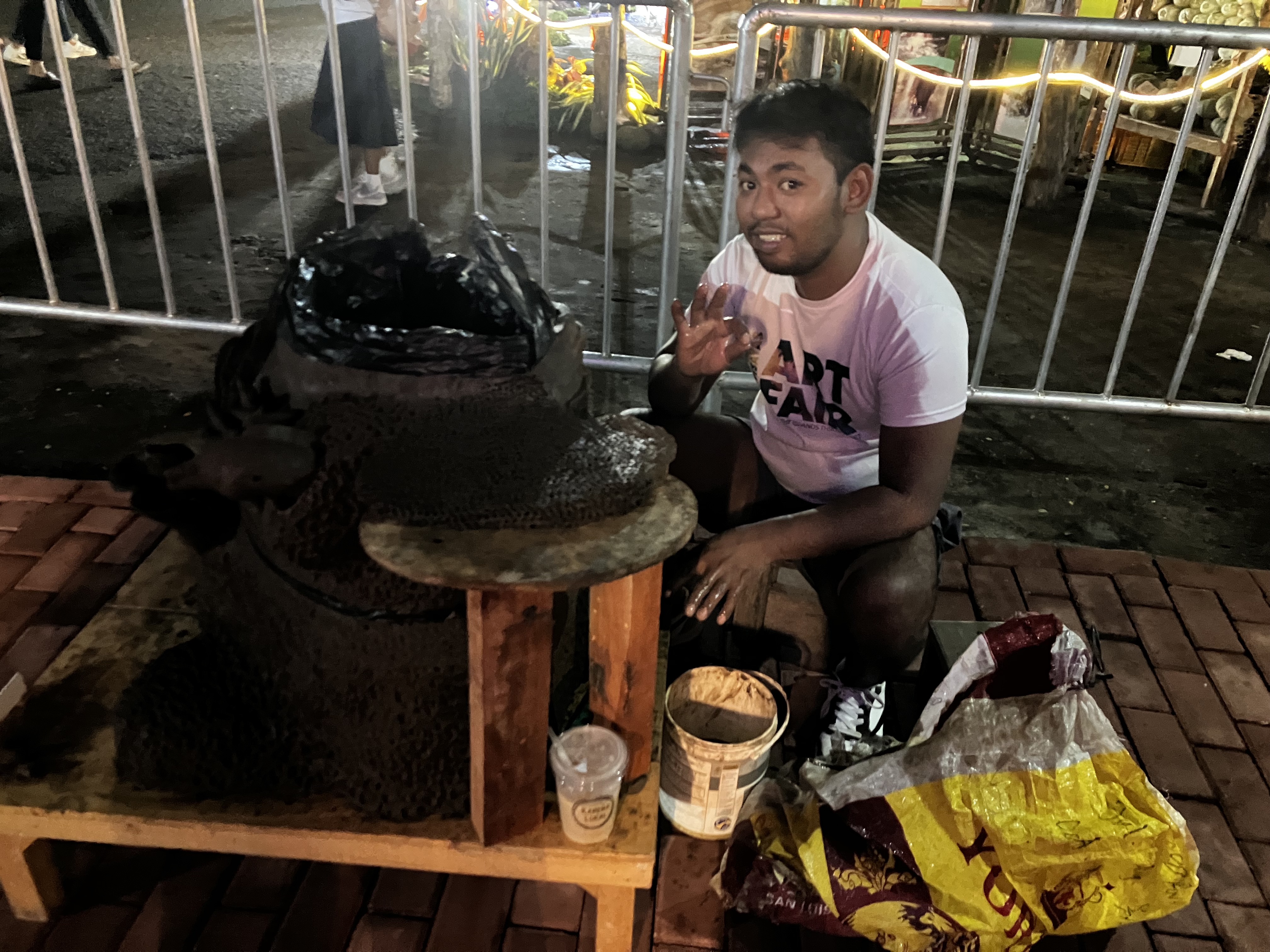 On hand every day, from 5 PM to midnight, local terra cotta artists Mikoo Cataylo and Hemrod Duran demonstrate the rigors of their art right outside the Dumaguete Booth, building a sculpture from scratch, to be finished on the final day of the Buglasan Festival. 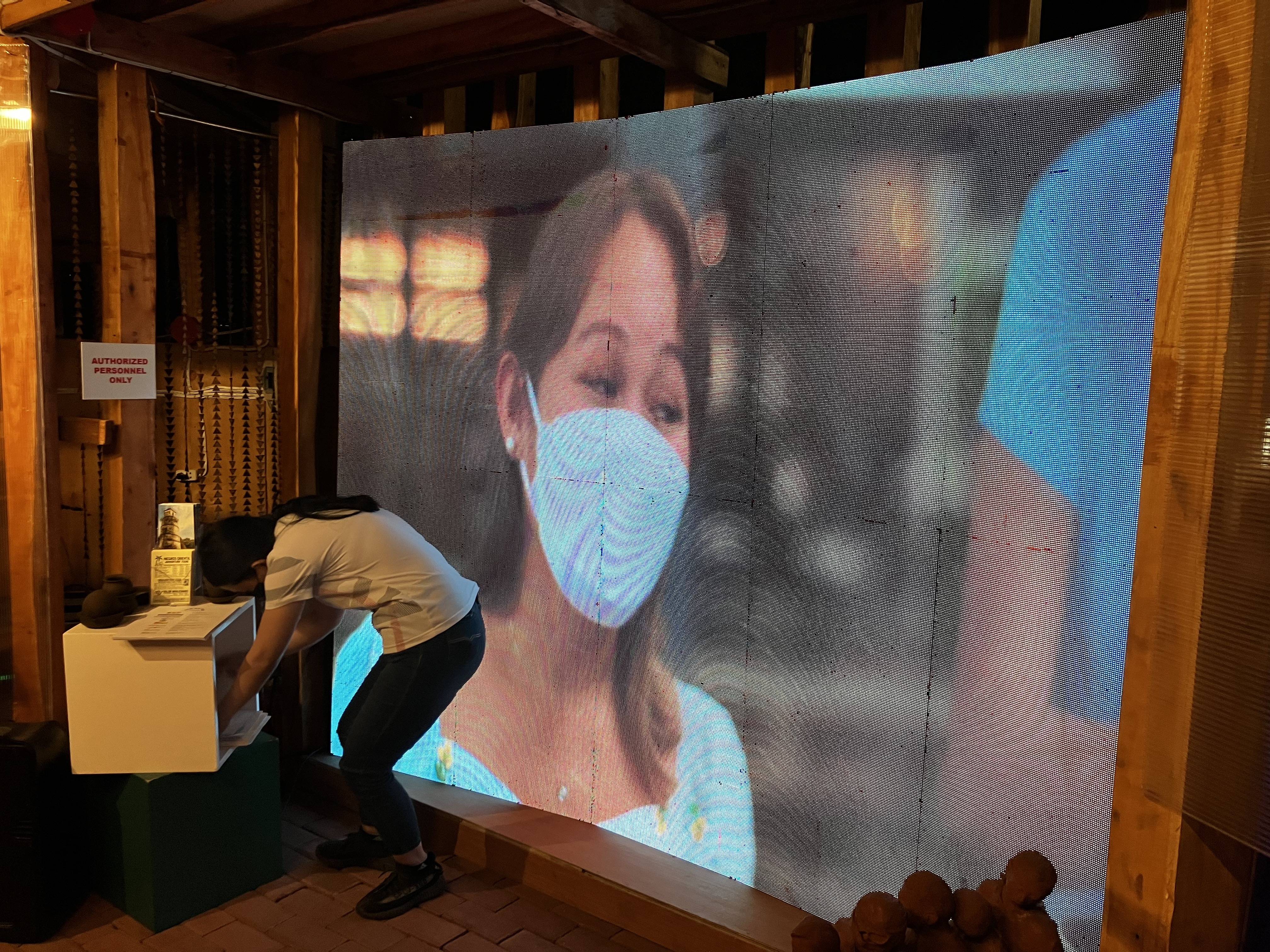 Immediately to the side of the visual arts display is a big screen that loops some of the most popular videos commissioned by the Dumaguete City Tourism Office in the past few years, most of them made under the auspices of Dwntwn Films, which is headed by local filmmaker JR Dalisay. The latest of these audiovisual presentations by Dalisay is a short film on the terra cotta heritage of Dumaguete City, which situates it both historically [recalling the pre-colonial past, as revealed by archaeological digs around the area, notably with sites in Bacong and Tanjay] as well as culturally [recalling Daro’s contribution to this heritage with its pot-making businesses, which as a whole is now a dying enterprise] and artistically [informed by the current trend among local artists in incorporating terra cotta in their work]. 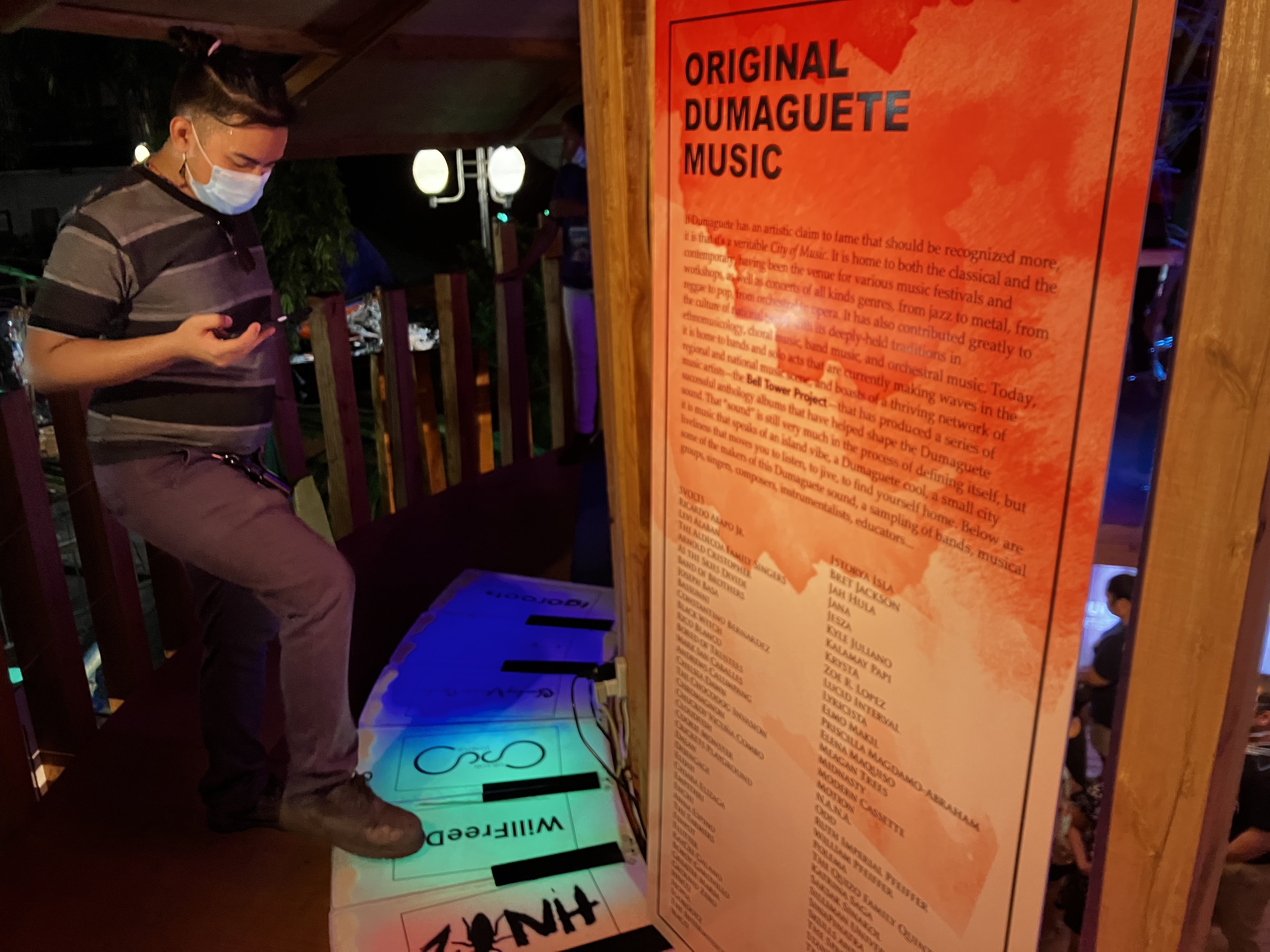 The music heritage display with the DIY piano on the second floor of the Dumaguete Booth.

On the second floor of the Dumaguete Booth, we find an exhibit dedicated to the music heritage of Dumaguete, complete with a DIY “piano” on the floor—with each key dedicated to a particular contemporary Dumaguete band of regional and national renown. This “piano” is a delightful attraction as it actually makes a sound when each of its keys is struck by a visitor’s foot. It invites one to create music, or just some random sound. This display is important because if Dumaguete has an artistic claim to fame that should be recognized more, it is that it’s a veritable City of Music. It is a musical melting pot to both the classical and the contemporary, having been the venue for various music festivals and workshops, as well as concerts of all kinds of genres, from jazz to metal, from reggae to pop, from orchestral to opera. It has also contributed greatly to the culture of national music with its deeply-held traditions in ethnomusicology, choral music, band music, and orchestral music. Today, it is home to bands and solo acts that are currently making waves in the regional and national music scene, and boasts of a thriving network of music artists—the Bell Tower Project—that has produced a series of successful anthology albums that have helped shape the Dumaguete sound. That “sound” is still very much in the process of defining itself, but it is music that speaks of an island vibe, a Dumaguete cool, a small city liveliness that moves you to listen, to jive, to find yourself home. The display also names some of the makers of this Dumaguete sound, a sampling of bands, musical groups, singers, composers, instrumentalists, educators—including Enchi, Hopia, Midnasty, Elizabeth Susan Vista-Suarez, Priscilla Magdamo-Abraham, Elmo Makil, and many others. 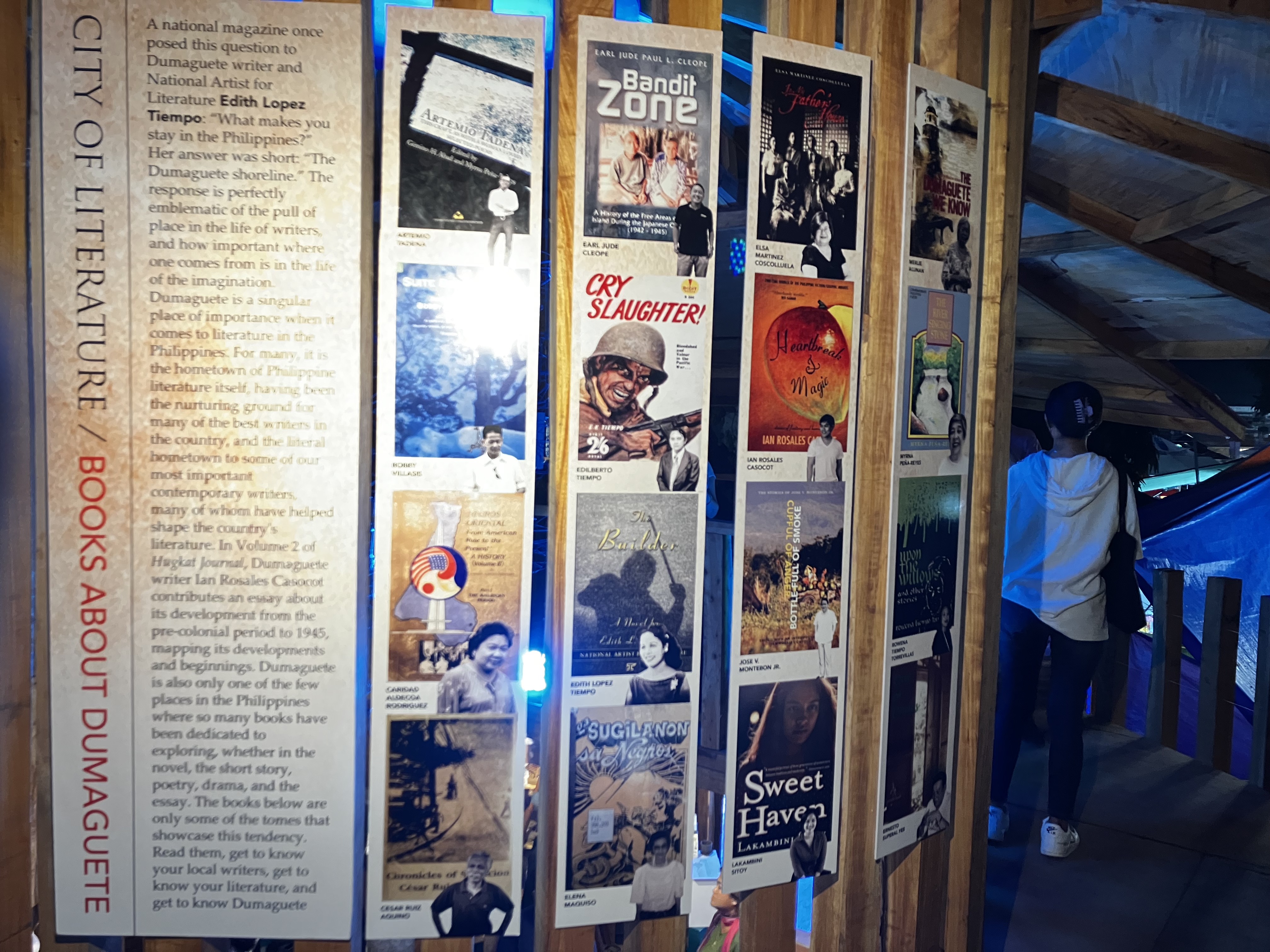 The literary heritage display on the second floor of the Dumaguete Booth.

Another display I am more responsible for is the Dumaguete Booth’s tribute to the literary heritage of Dumaguete. I was tasked to gather together the cover art of books by Dumaguete authors, with titles that directly depict the city in novels, short stories, poetry, plays, and essays. The inspiration for the display sprang from a quote by Dumaguete writer and National Artist for Literature Edith Lopez Tiempo. A national magazine once posed this question to her: “What makes you stay in the Philippines?” And her answer was short: “The Dumaguete shoreline.” For me, this response is perfectly emblematic of the “pull of place” in the life of writers, and how important where one comes from is in the life of the imagination. One can consider Dumaguete as a singular place of importance when it comes to the development of literature in the Philippines, because for many, it has been nurturing ground for some of the best writers in the country and the literal hometown to some of our most important contemporary writers, many of whom have helped shape the country’s literature as it exists today. Dumaguete is also only one of the few places in the Philippines where so many books have been dedicated to exploring, and the books featured at the Dumaguete Booth are only some of the tomes that showcase this tendency. This tribute is an encouragement for everyone to read them, and for locals to get to know their own writers, to get to know their own literature, and ultimately to get to know Dumaguete better.

Come and see the Dumaguete Booth at the Buglasan now, and bask in our heritage of culture and the arts! 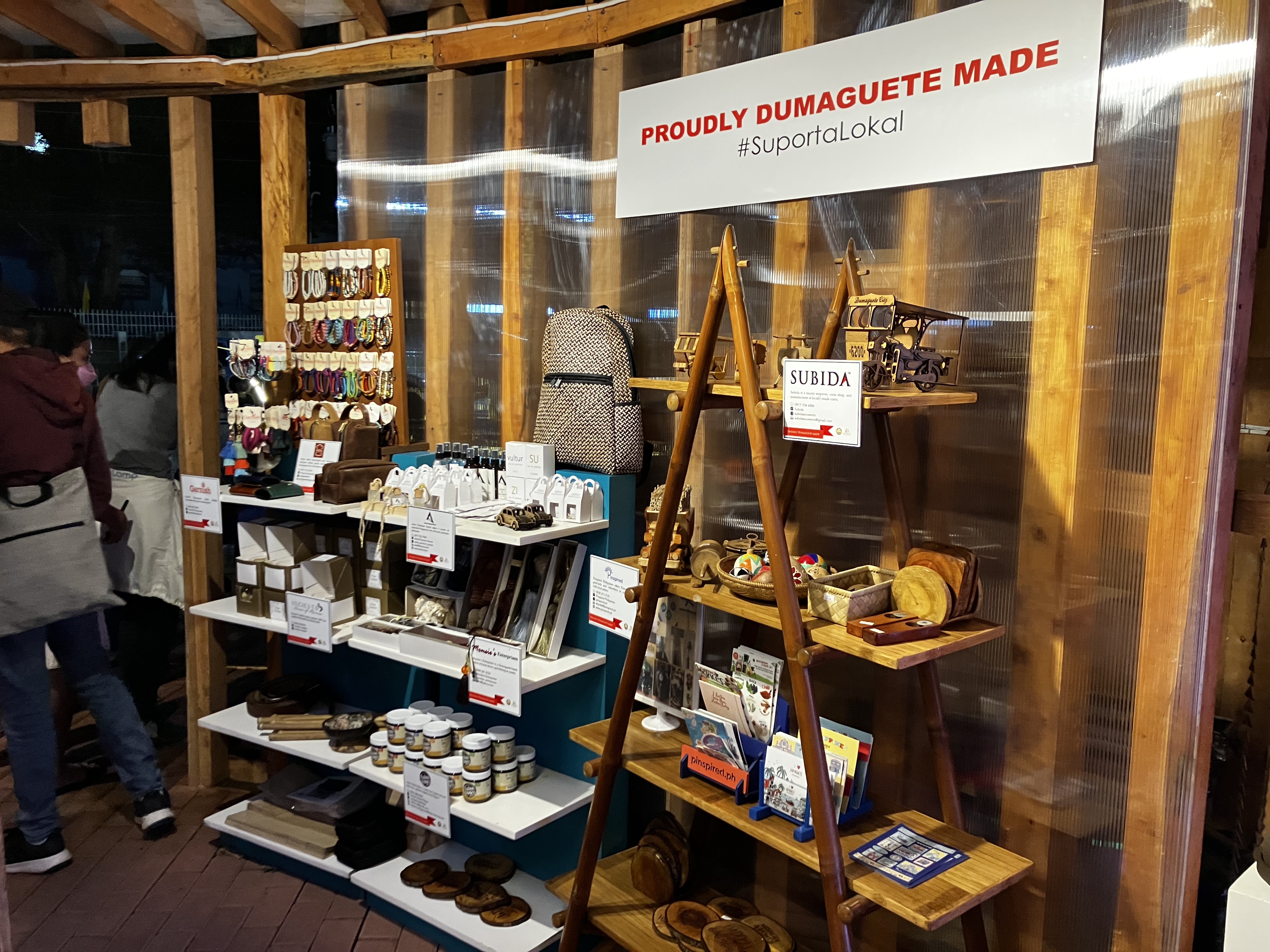