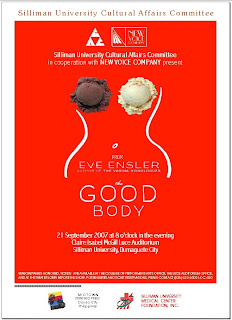 And speaking of cultural events in the Luce (Dumaguete is buzzing these days with the parade of shows), the last show for the first half of the cultural season is New Voice Company's production of Eve Ensler's The Good Body. Here's the official description of the play: "Since her one-woman show The Vagina Monologues shot down societal notions of acceptable topics in theaters—and in spired legions of independent productions and community events around the world—playwright, performer, and activist Eve Ensler has turned her unique eye on the rest of the female form. Whether undergoing Botox or living under burkhas, women of all cultures and backgrounds feel compelled to change the way they look in order to fit in with their particular culture, in order to be accepted, in order to be good. In The Good Body, Ensler explores their experiences with monologues representing women from Bombay to Beverly Hills. Delivering narratives collected in locker rooms, cell blocks, boardrooms, and bedrooms, Ensler frames their stories with her own personal journey from a self-loathing teenager to a (sometimes) self-accepting adult. Interspersed throughout are riotous excerpts from Ensler's lifelong dialogue with her belly—a sassy and conniving antagonist in its own right. Through her honest, insightful, and sometimes naughty portrayal of genuine experiences and real-life obsessions, Ensler strips the complicated issue of body politics down to its intimate essence, once again destroying pre-conceived notions about what women really think. This is new theater at its finest: The Good Body will move, inspire, entertain—and just might make you blush a bit in the process."

The Dumaguete production, slated this Friday, September 21, will feature Monique Wilson herself, together with Juno Henares and Lily Chu.

There are only about 65 tickets left. So, if you're in Dumaguete this Friday night, tickets are available at the Silliman University College of Performing Arts Office and the Luce Auditorium Office, and at the theater lobby before the show. For inquiries and ticket reservations, please call (035) 422-6002 loc. 520 and look for Glynis.