8:58 PM | Remy and Houdini on a Wonderful Saturday Afternoon

Saturday seems so gentle. The sky is downcast, but not in a forbidding way: there's a little drizzle now and then to banish away the memory of the punishing heat of recent months, and there's a nippiness to the air that reminds me of old Decembers. The -ber months have finally come upon us and I am grateful. Maybe that is why I've been playing and humming along to The Carpenters singing their famous Christmas medleys all afternoon. (The Mormon Tabernacle Choir is next.) The neighbors must think I'm crazy. Still, this is an improvement: I used to celebrate Christmas in mid-June, with such enthusiasm (and perhaps overly so, because by December, I'd be spent, and there would no longer be any Christmas spirit left to celebrate with everyone else). Last night, we were having a late dinner with Monique Wilson and her fellow cast members in Eve Ensler's The Good Body. The show was successful, and later on we went to Hayahay to celebrate some more with New Voice Company Assistant Artistic Director Rito Asilo and actress Lily Chu. I drank one bottle of Strong Ice beer -- enough to make me tipsy, and sleepy. And so I slept until noon today, a luxury I haven't had in ages, and when I woke up, there was no other way to celebrate this surprising peace of mind but by simply becoming laid-back. It was wonderful. I haven't had this kind of Saturday in such a long time. I tidied up the pad a little bit, watched a bit of TV, monitored the movies I'd been downloading via BitTorrent, shopped for a light bulb and garbage bags at Lee Plaza, and ate a lovely dinner in Howyang. I also cleaned up the babies' cages, and played with the hammies... 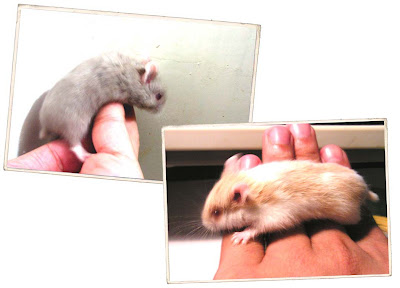 The one on the left is Remy -- so called because he looks just like the cute rat chef in Ratatouille. He's the cutest thing, with gray fur and pink paws and ears. The one on the right is Houdini, so called because he used to make a habit of escaping his cage, and the next thing we would know, we'd be spying from the corner of our eyes this ball of orange and white fur scurrying around. I tell you, hamsters are the best stress busters out there (and the worst photo subjects -- they move around too much!).