6:13 PM | Life is Lots and Lots of Bath Oils: An Appreciation of Nora Ephron 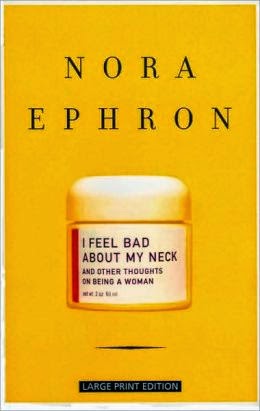 I have loved Nora Ephron forever, and when she died in 2012, it felt so much like a personal loss. In the days after the announcement of her passing on from leukaemia, I read and read endless editorials and fawning obituaries about her and her legacy, as if to read all these was to somehow entice her spirit back to beguile us once more with her unique voice. I YouTubed her AFI tribute to Meryl Streep (see below), and I was gobsmocked once more with the personality her wit took on. And then I went on a minor film bender, watching most of my favourite Ephron movies from When Harry Met Sally... (which she wrote) to Julie and Julia (which she directed).

I guess this often happens with the artists we admire and love. Our sometimes obsessive familiarity with their work signals for us some embracing illusion of connection, as if our devotion has permitted us some access to their personality, to their life, to their world. Woody Allen is one to vehemently deny autobiographical connection to his work -- "That's not me!" he'd always say -- but I've always considered that as a necessary caveat to the darkness he dramatises, often repetitiously, in his films. (Oh, come on, Woody, I'd say, at least some of these is you.) But not Nora Ephron. She mines her life and puts them out as fascinating tidbits in the films she has written or directed. And in the books that she has authored, we get a virtual confessional. She had done so in Wallflower at the Orgy, effectively becoming one of popular culture's most effective wit. She was funny, and the way she saw her own life with bemused consideration proved so effective that her essays take on the sheen of the universal. She goes, "Whoa is me!" -- but follows that with an amused "Ha!" And that stance allowed many of us to laugh, and see parts of our own lives reflected in her assessment of hers.

It took me a while to get to I Feel Bad About My Neck, her last volume of personal essays before she died. Ostensibly a collection of her own reflections on a New York woman's life at a certain age, it is instead some kind of valedictory. True, we do get the promised womanly reflections of womanly concerns -- the title essay, for example -- that has a lot to do with ageing and "maintenance." But at the end of the book, the remaining essays turn somber, if brightened by wryness and humour. The book becomes a contemplation of death. The turn starts with "The Story of My Life in 3,500 Words or Less," which has the undertone of the desperately autobiographical, bordering on the philosophical "What did it all mean?" In the end, the secret of life she gleaned is this: "We can't do everything." With the minimalist "What I Wish I'd Known," we get a human being's struggle to understand it all, even if everything cannot be done, and what is distilled are tiny moments of epiphanies from life. All of them recollected as scintillating insights, even if they spring from moments of utter banality. By the time we get to "Considering the Alternative," we are prepared for the book's very thorough reflection on death and passing on. She considers the matter of regret, and calls the entire thing a matter of je regrette beaucoup: "Oh, how I regret not having worn a bikini for the entire year I was twenty-six. If anyone young is reading this, go right this minute, put on a bikini, and don't take it off until you're thirty-four."

Later, she writes: "I am dancing around the D word, but I don't mean to be coy. When you cross into your sixties, your odds of dying -- or of merely getting horribly sick on the way to dying -- spike. Death is a sniper. It strikes people you love, people you like, people you know, it's everywhere. You could be next. But then you turn out not to be. But then again you could be. Meanwhile, your friends die, and you're left not just bereft, not just grieving, not just guilty, but utterly helpless. There is nothing you can do. Everyone dies."

And then she makes us laugh, not to undermine the seriousness of her considerations, but to underline some more perhaps the only answer there is: to always enjoy the moment when you are most alive, because. "I need more bath oil," she ends her essay. "And that reminds me to say something about bath oil. I use this bath oil I happen to love. It's called Dr. Hauschka's lemon bath. It costs about twenty dollars a bottle, which is enough for about two week of baths if you follow the instructions. The instructions say one capful per bath. But a capful gets you nowhere. A capful is not enough. I have known this for a long time. But if the events of the last few years have taught me anything, it's that I'm going to feel like an idiot if I die tomorrow and I skimped on bath oil today. So I use quite a lot of bath oil. More than you could ever imagine. After I take a bath, my bathtub is as dangerous as an oil slick. But thanks to the bath oil, I'm as smooth as silk."

That's all of life, we learn. Not to skimp on bath oils.