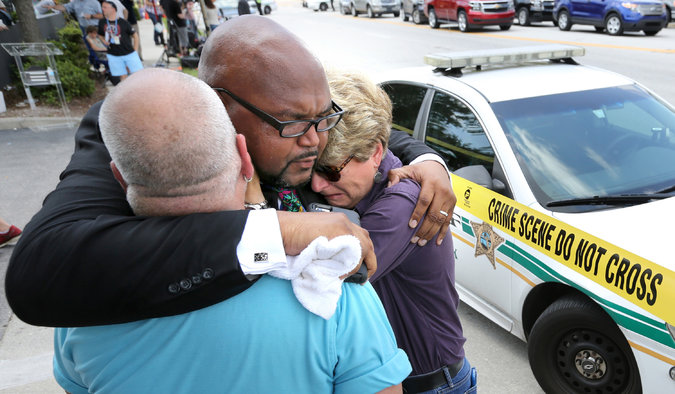 Frank Bruni writes today in The New York Times about the carnage in Orlando: "The Islamic State and its ilk are brutal to gay people, whom they treat in unthinkable ways. They throw gay people from rooftops. The footage is posted online. It’s bloodcurdling, but it’s not unique. In countries throughout the world, to be gay is to be in mortal danger. To embrace love is to court death." [More here.]

This is so true. That's why the next time somebody uses the word "faggot" or "bakla" or "bayot" on you to dismiss you as being cowardly, call them out. Because nothing is more courageous than to come out gay in a very homophobic world -- so homophobic they can murder you for it.

When I was younger and eager to understand why I am the way I am, I read countless books and watched countless movies that illustrated for me the entire spectrum of being gay -- from understanding the first inchoate stirrings to the eventual coming to terms with one's sexual identity, from coming out to finally making consummating the love which Oscar Wilde once said "dared not speak its name," from celebrating the culture of queerness to confronting the homophobia queerness engendered. Most of all, I tried to look for "like people in history" (Felice Picano's term), and marvelled at how certain celebrated heroes from the past were actually gay and lesbian. Aristotle. Socrates. Hadrian. Leonardo Da Vinci. Michelangelo. Walt Whitman. Abraham Lincoln. Alan Turing. Tennessee Williams. Eleanor Roosevelt. Cary Grant. Possibly William Shakespeare. James Dean. Noel Coward. Lord Byron. Francis Bacon. Christopher Isherwood. Abraham Lincoln. David and Jonathan. Frida Kahlo. Billie Holiday. W.H. Auden. William Butler Yeats. Laurence Olivier. Josephine Baker. George Bernard Shaw. Sweden's Queen Christina. Ralph Waldo Emerson. Virginia Woolf. Marlene Dietrich. Great and accomplished men and women all, respected by everyone, and celebrated in history -- even if some of them (like Turing and Wilde) were vilified for being gay despite their enormous contributions to humanity.

Each time I read of them, and each time I brought up their names to defend my being gay against those who would take it to mean I was a worthless human being, I felt I was in great company.

And above all, I gloried over the fact that the greatest conqueror of the ancient world -- Alexander the Great, the manliest of men -- had a life-long lover in his bodyguard and general Hephaestion. Indeed, Hephaestion's death was what sent Alexander into a horrible depression -- and he died a few months later, leaving behind an empire such as the world then had never seen.

So every time some people call me or anybody else "bayot" to mean we are weaklings or cowards -- what a silly synonym! -- I think of Alexander the Great, and I think how ignoble these ignoramuses are not to know that history is evidence enough of how wrong they are.