The point of art, so it is sometimes said, is to render the mundane into the level of the extraordinary and consequently lift it to higher, perhaps loftier, consideration. There, wrung out of its usual ordinariness, an object can often be used as vessel for self-expression, or as statement, or as reflection of some profound “truths” about life, about existence, about meaning.

The formalists call this process “estrangement.” In literature, where it is often used, scenes of ordinary reality is depicted, through words, in a stylistic manner that gives the reader an extra layer of interpretation that goes beyond the literal and into the metaphorical. At the ending of James Joyce’s iconic short story “The Dead,” the husband listens to his wife’s tearful, memory-filled descent into slumber while he looks out the window of their room, seeing snow falling everywhere—yet this is no ordinary sight of snow: in Joyce’s pen, it is a distillation of anguished knowing that we cannot really know the deepest truths about the people we love.

Then there’s Marcel Duchamp who, in 1917, presented for exhibition an ordinary urinal, and titled it “Fountain”—igniting controversy, and sparking an ongoing debate about what makes art. The artist Beatrice Wood, perhaps recognizing the innovative, inventive, and disruptive power of the work, wrote in the aftermath of the exhibition: “He took an ordinary article of life, placed it so that its useful significance disappeared under the new title and point of view—[and] created a new thought for that object.”

This, for me, has always been part of what interests me about art—to see the artists’ subjects in the canvas or lens or mold of their subjectivities, and inquire of myself what provokes me of their specific ways of seeing, what reaches of metaphor [or, in Wood’s formulation, “new thought”] they are trying to go for.

The subject of Hersley Casero’s Organic Magic, an exhibit currently running at the new Dakong Balay Gallery along the Rizal Boulevard, certainly invites this kind of scrutiny. It is, after all, concerned with various depictions of one of the commonest things we have in this world: the rock—which is ubiquitous, and does not readily demand from us closer scrutiny, much less as agent of artistic expression.

(And yet this view might be one of contemporary failing. Because art history would tell us that rocks [and surfaces of rocks] have been there since prehistory, with early men shedding light on the daily life in the distant past through pictographs, petroglyphs, engravings, petroforms [rocks laid out in patterns], and geoglyphs [or ground drawings]. Today, there’s also land art occasionally using stones and rocks to render landscapes in new light.)

The seed of Casero’s exhibit sprang from his recent art residency at Warnecke Ranch and Vineyards on Chalk Hill in Healdsburg, California—a property in the Alexander Valley that hosts, partly, the Russian River. The meandering flow of the river leaves in its path what locals call “wishing rocks,” which are rocks with a single perfectly unbroken strip of quartz all the way around the circumference—with no splits, no out-runners, no faint second lines on them, to make them “true” wishing rocks. According to Jim Brace-Thompson of Rock and Gem, lore has it that “if you trace your finger around the line while closing your eyes and making a wish, and then throw the stone into the sea as far as you can [or, barring that, give it to another person], your wish will come true.” 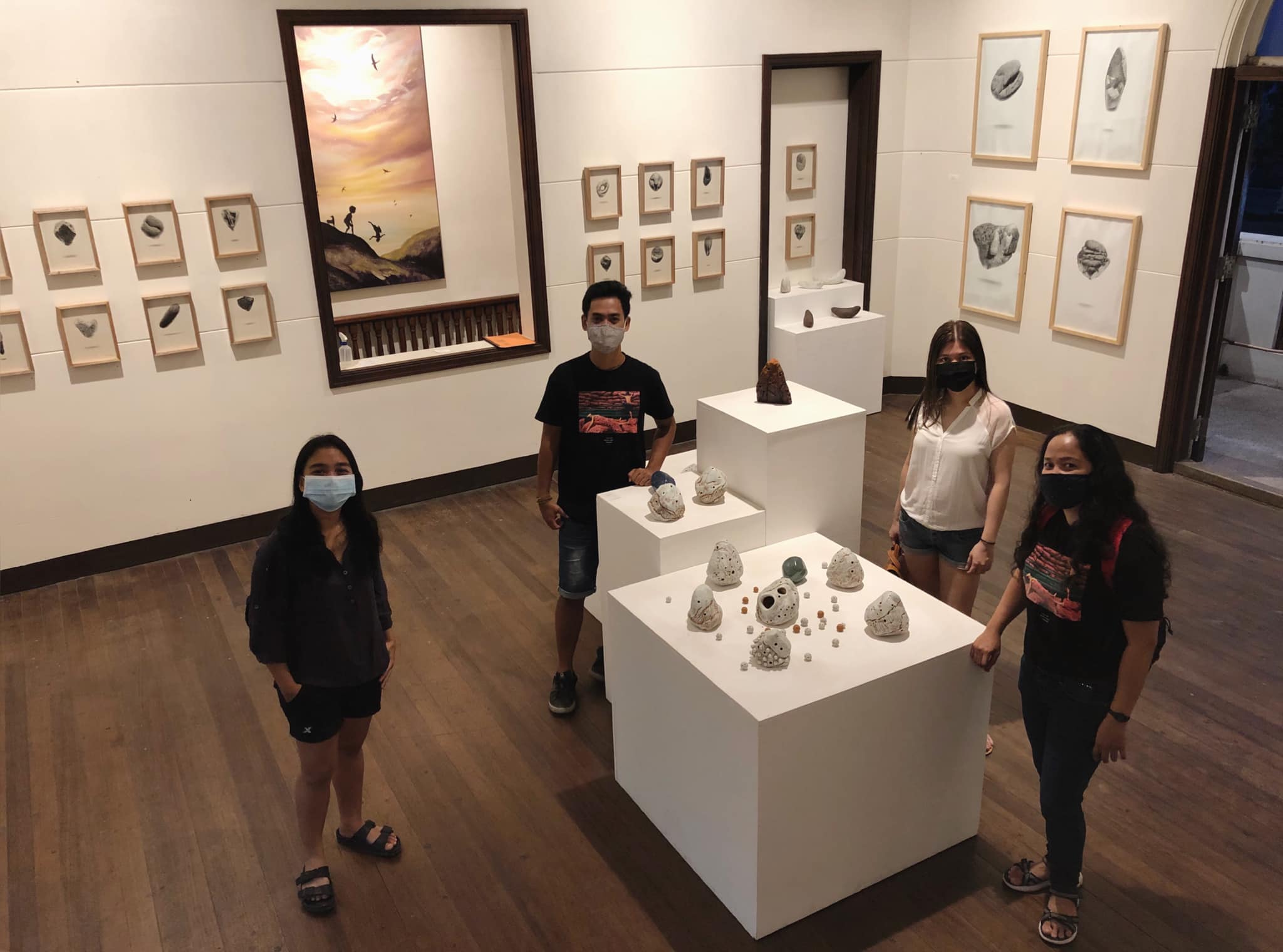 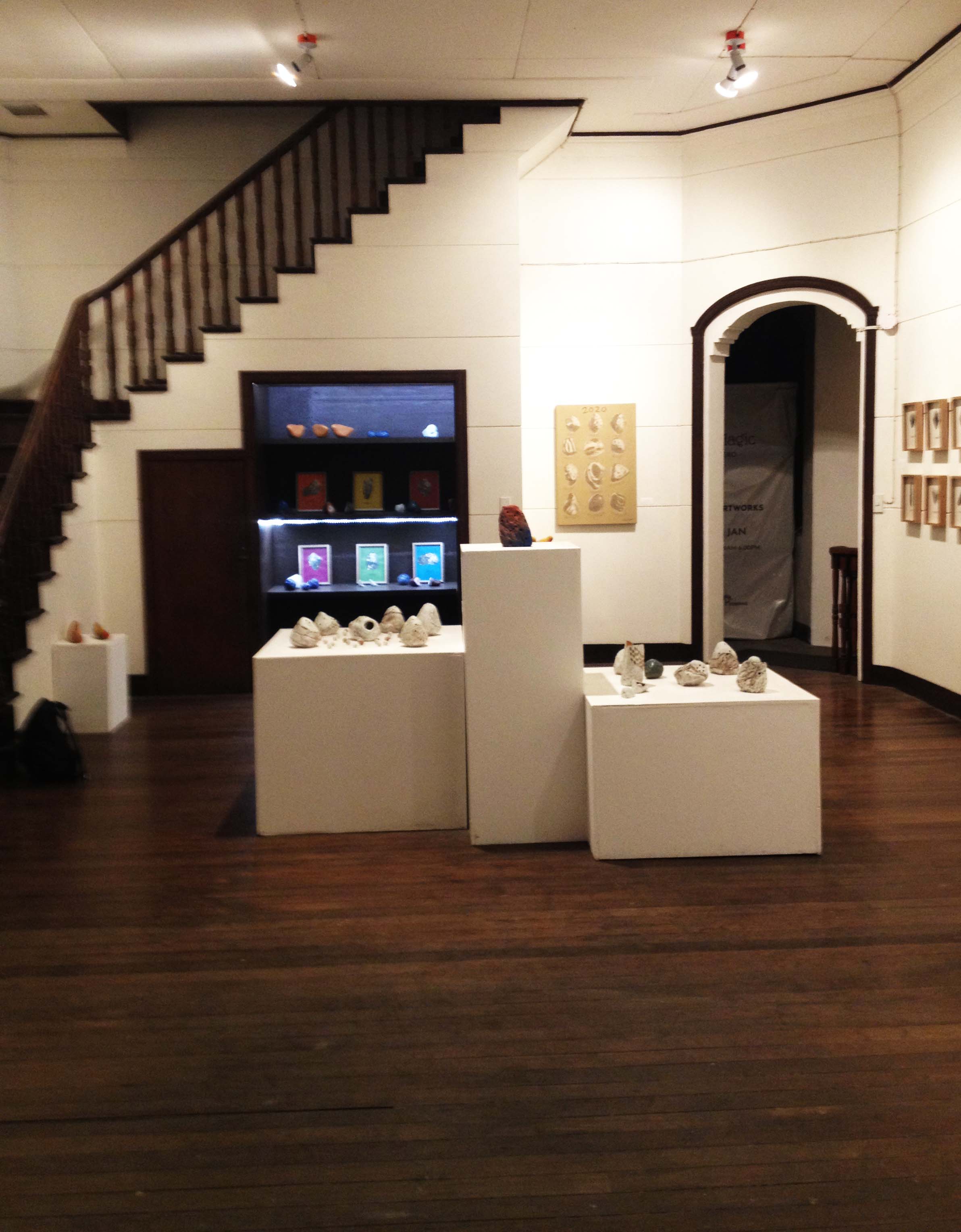 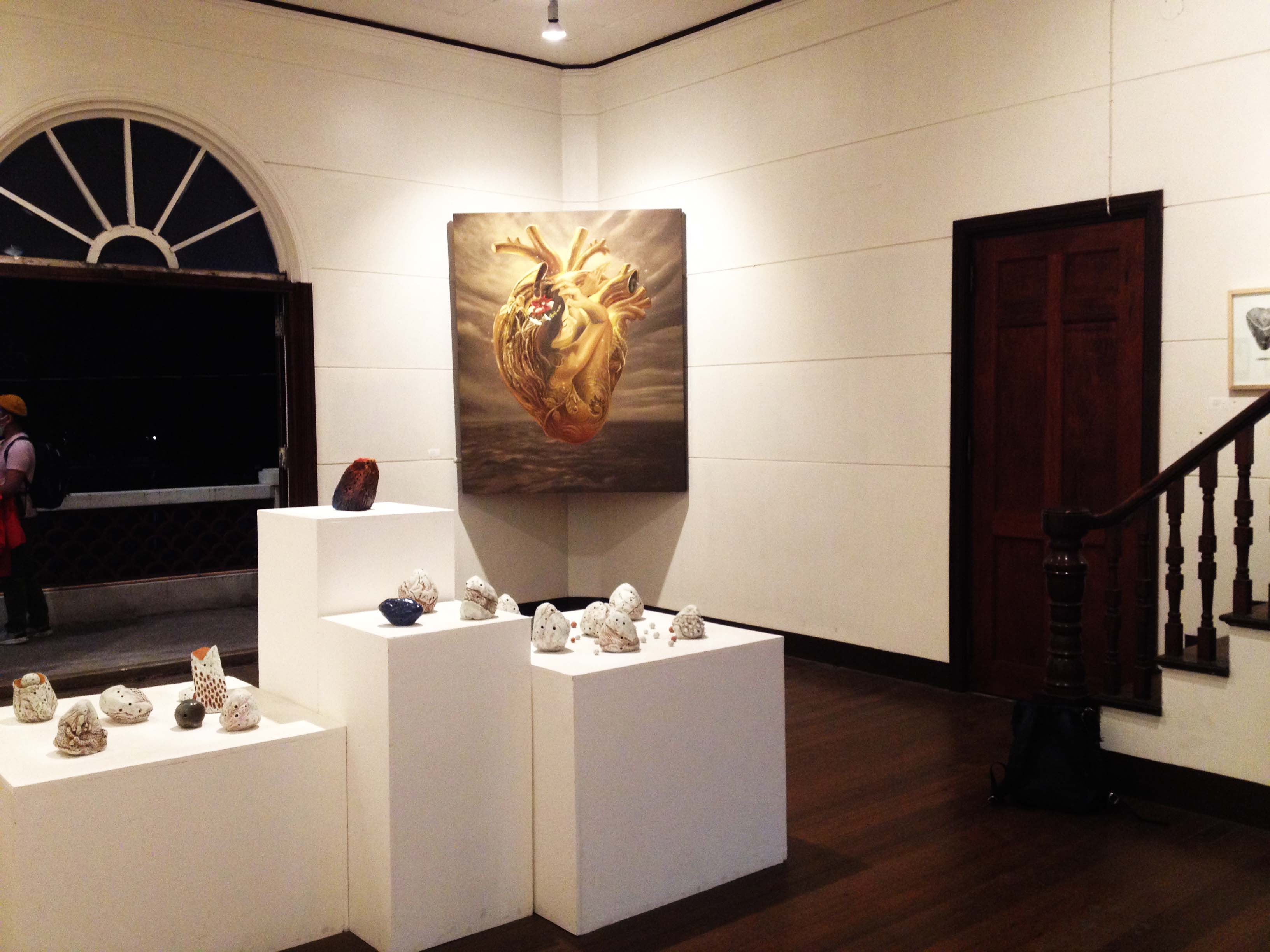 This link with magic, wishing or otherwise, is the key to Mr. Casero’s immediate inspiration for the exhibit, based on what I have come to understand about his art. [Full disclosure: I curated his first solo exhibit, Uncommon Ordinary Magic, in 2011.] He has always been keen—because of very interesting family history that stretches back to magic-filled Camiguin past—on rocks and stones imbued with the supernatural. The title of the current exhibit alone cues us in.

Returning to the Philippines from that California sojourn, he began to seek out local rocks and minerals, now more attuned to their allure and to their magical promise. What resulted from this is a collection splintered into three modes of expression—ceramics, graphite on paper and canvas, and oil on canvas—that hint of the artist finding ways to express the rock in his specific metaphor for the world we live in.

The works in graphite on acid-free paper—collectively known as the “On the Rocks” series—feel like the artist in the initial phase of this “rocky” exploration. They have Casero deep in what you might call “rock portraiture,” delving into the very literal. The framed works, painstaking renderings of individual rocks in glorious black etchings, have their subjects seemingly afloat in the midst of negative white space, giving them personality, their realistic representational nature obliquely giving them a sense of the magical: they’re almost like icons behind the glass, demanding scrutiny, even worship. 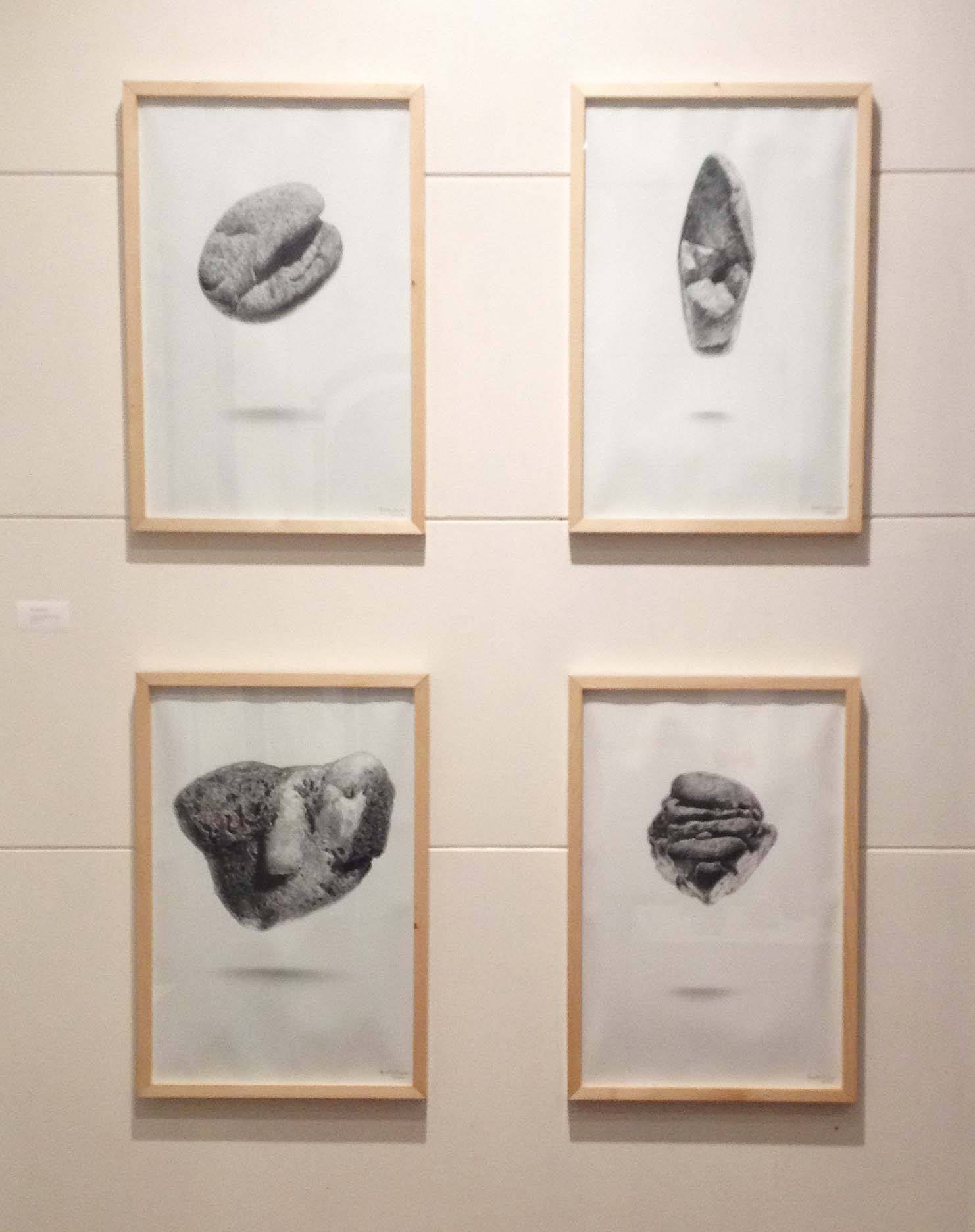 In his sculptural, ceramic works, Casero goes into simile: most of the pieces are untitled, but you cannot mistake their identification—they’re shaped like ordinary rocks, like corals, like stones, but in sometimes giving them color, Casero also insists on other similes: “This one is not just like a rock, it is also like a sea cucumber or like a pigeon.” 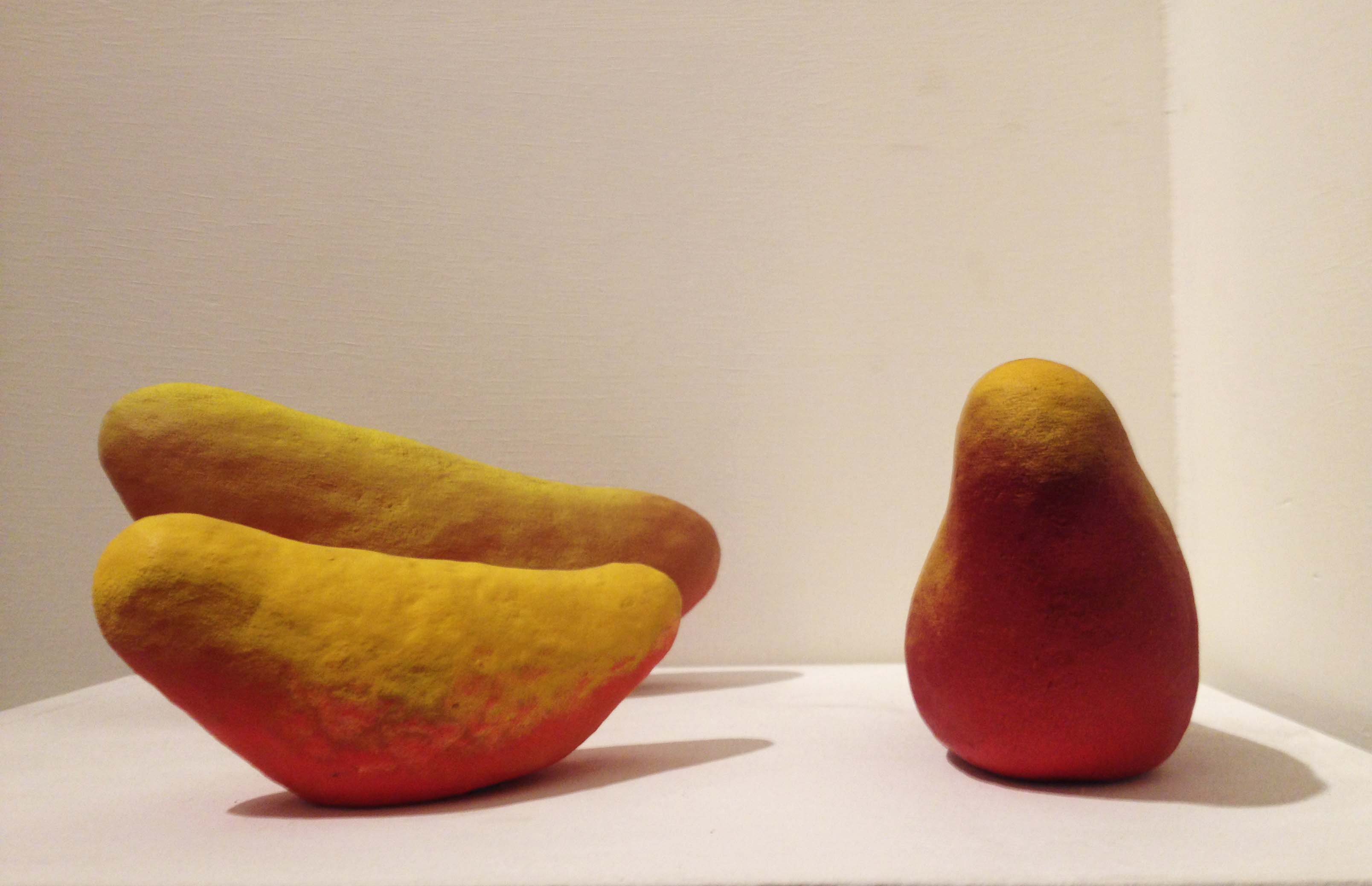 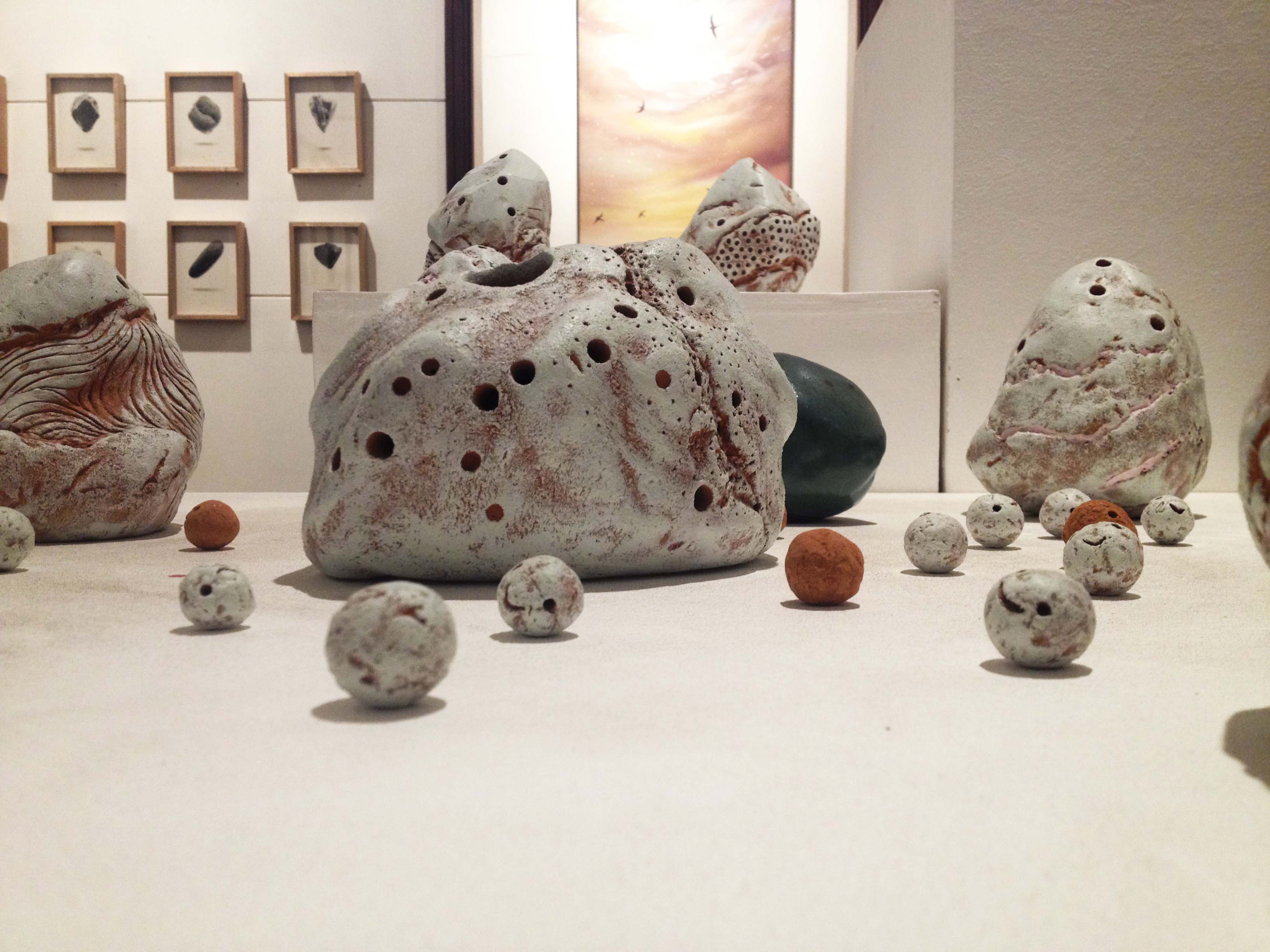 And finally, in his works on canvas, Casero takes the rock, or the organic, into deep metaphor. The most commanding work in the space—simply for its size and for how its mounted—is his work in oil on canvas titled “Heart of Gold.” What’s portrayed is the bare human heart in all its muscular texture, floating above a somber sea—but a closer look gives us a human being embedded in its design, and an even closer look—this time in the context of the overall exhibit, is that the heart, by shape, also looks like a rock. Here, and following the rest, Casero limns on the magical connectivity of all these things in our natural world, asking us to pay closer attention to the organic connection we all share, which is the biggest magic of all. 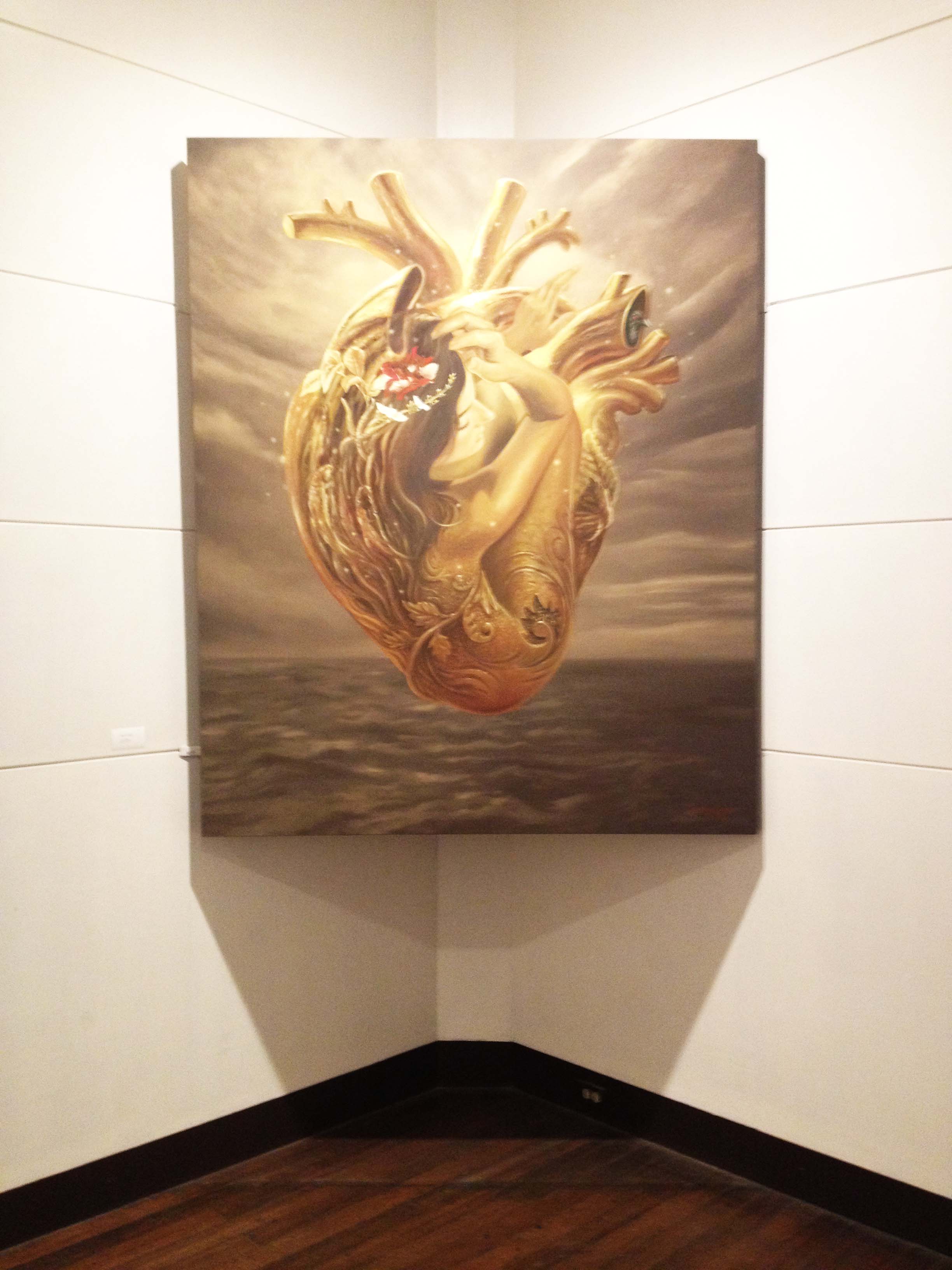 The exhibit subscribes to that ecological reading. Its statement ends with this: “For thousands of years we worshipped, respected, and revered the natural world. But our modern, technological lifestyles have created a false sense of dominion over the Earth we inhabit. We endeavor to control and construct our surroundings in order to meet our desires, when in fact it is our environment, which weathers, carves, and polishes our hearts… All organic matter that exists on Earth today is made of ancient stardust and contains the whole universe within it. Us, the Earth, even the little rocks we tread into the ground beneath our feet. Ultimately, we are all made up of nothing short of ‘organic magic.’”

The exhibit statement also calls to mind how 2020 should make “rethink what is really important to us, and to rekindle a sense of awe and gratitude for the little mundane things we are already abundant in, in their many forms and facets.” Which brings me to my favorite piece in the exhibition:

In “It’s Been a Hard Year, But We Made It...,” a work in acrylic and graphite on canvas, Casero gives us a 2020 calendar, spaces marked out for all the months in Binisaya—but instead of dates in grids, we get pictures of rocks, their texture rendering literal hardness and metaphorical hardship. But they are also symbols of resoluteness, and gateways to wishes and magic—enough comfort for our hard times. 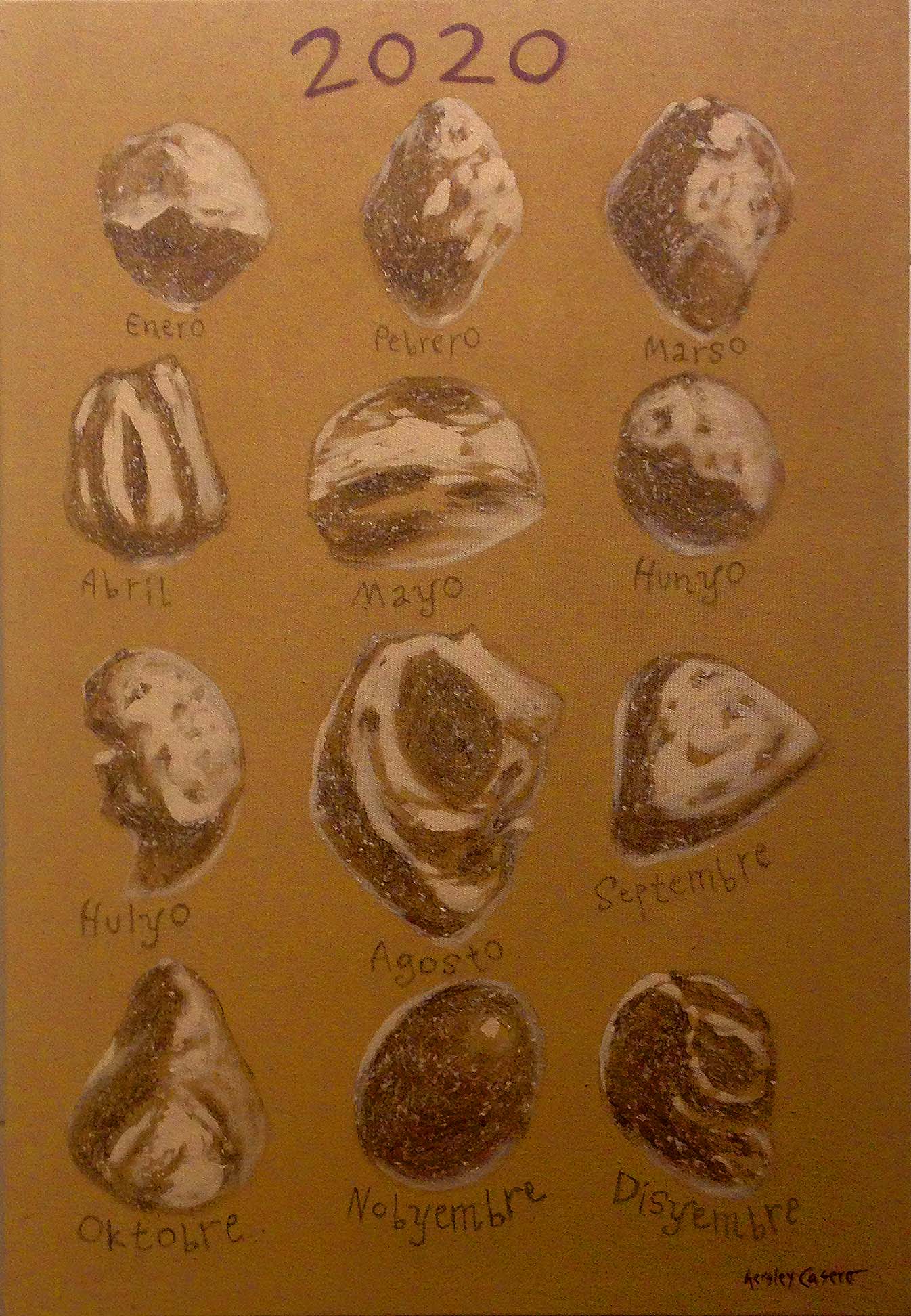 The exhibit is presented by Pinspired.ph and Dakong Balay, and runs until the end of January, 2021.