5:58 AM | An Arts Academy for the Nation’s Teachers

One of the most dynamic, and humbling, things I do in my vocation as both writer and cultural worker has been moderating writing workshops for teachers. I cannot recall when this exactly began for me, but it has been a while. And my general takeaway has always been that of supreme fulfilment, a matter of giving back, so to speak.

In one of the most recent workshops I’ve given, I was asked by a participant how I knew I was a writer. My answer was immediately forthcoming: I had no idea I could write well until my teachers told me I could, paving the way to a career devoted mostly to creative writing.

In grade school, I remember enjoying doing the themed compositions my teacher, Ms. Bennie Vic Concepcion, made us do on an annual rotation—and missives devoted to “How I Spent My Summer Vacation” or “My Best Friend” became ripe ground to explore, in a creative manner, my childhood rumination on those themes. Ms. Concepcion, who was my English teacher from Grade III to Grade IV, also equipped me with the fundamentals of the English language, making my facility in it adept enough to be able to tell stories well. I was later appointed to become editor-in-chief of the school organ, The Western Star, although I had no idea I could do journalism as well. The same thing happened in high school, with teachers like Ms. Tessie Sedigo, Ms. Gina Fontejon, and Prof. Alejandra Bañas validating my writing, that I could also be tasked with editing the school paper. In college, Prof. Ceres Pioquinto took me under her wings, and under her I learned the nuances of literary criticism. When I was a freshman, Prof. Timothy Montes approached me after his BC 11 class one day, and essentially “ordered” me to apply for The Weekly Sillimanian [which I did, and years later, I would become its editor-in-chief]. It was also Tim who “ordered” me to apply for the Silliman University National Writers Workshop in 2020, where I rubbed elbows for the first time with many of the luminaries in Philippine literary circles. That essentially began my writing career.

My teachers were the ones who recognized something in me I did not even see in myself. They inspired me, they goaded me, they made me believe in a talent I never even knew I had. Thus, in giving these writing workshops for teachers, I am only coming full circle. These workshops have been a privilege and a pleasure.

The Arts Academy of the Cultural Center of the Philippines has been an annual tour-of-duty for me—vacated only by the pandemic in recent years. In past editions of this academic outreach by the CCP, I’ve taught regular writing workshops in poetry and fiction, but when I was invited to teach again in 2022, I decided that I wanted to pursue something I’ve been an advocate of in recent years: writing in Binisaya—in other words, mamugnaong katitikan sa Binisaya.

I felt it was necessary. I felt I could make a difference if I use Binisaya as the lens with which to do a workshop in creative writing, and succeed not only introducing obscure texts to a new audience of teachers [who might go on to teach these very works to their classes] but also in rekindling in them the often-ignored truth that when you write in your own mother tongue, you will discover a different kind of depth you can never really fathom when you use a borrowed language.

While creative writing in both English and Tagalog continue to flourish—and helped by the fact that these are taught in schools and published widely—regional language literature always seem to be neglected in the larger scheme of things. Our writings in Binisaya, Bikolano, Waray, Hiligayon, Kiniray-a, Akeanon, Ilocano, Chavacano, and others are certainly not dead—of late, they have actually seen a resurgence [if limited] in popularity and in scholarship. But the fact remains that in terms of development it has lagged behind English and Tagalog. I’ve written in English most of my life, and I’ll probably continue doing so, since this is the language that I am most comfortable with—but I’ve become cognizant of this sense of responsibility of becoming an advocate of the literature of my own language because, to borrow the wisdom of two my mentors, this specific kind of literature is a valid building block in our continuing effort to build, and understand, the nation, which we should do city by city, province by province, language by language [something I learned from Tim Montes]; and learning the language as part of the culture of the place where we’re from helps us distance away from using outside models [e.g., Manila culture, Western culture] to understand ourselves [something I learned from Rosario Cruz Lucero].

They are only a part of a bigger contingent of teachers [about 180 of them] who have been in Dumaguete the past few days, and here to sharpen more their classroom know-how in the teaching of Theatre Arts [under Dessa Quesada-Palm], dance and dance production [under Ronnie Mirabuena, Cheenee Limuaco, Angelo Sayson, and Aiken Quipot], film [under Elvert Bañares], band conducting and music production [under Joseph Albert Basa and Juni Jay Tinambacan], and visual arts [under W Don Flores and AK Ocol]. I’m sure I’m not the only one among the mentors who are gratified in the heartening response of our participants—I love my workshoppers’ hunger to learn, and I love their capacity for absorption and reflection, for their humor even in challenging activities, and for their willingness to also teach me in things that I lack. 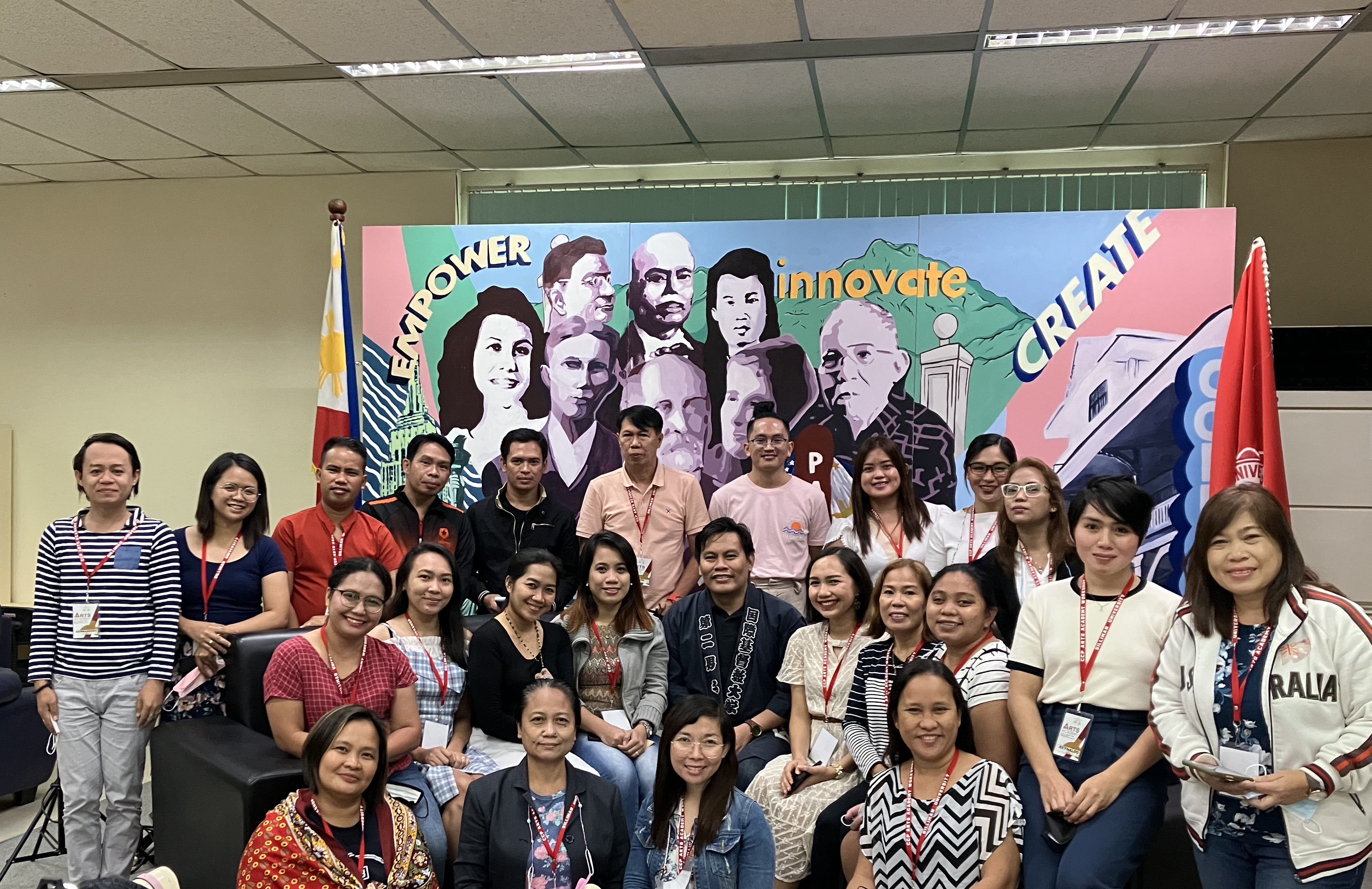