Last night near dawn, I was jolted out of sleep when I was overcome by the most painful stomach ache. It came all of a sudden, and I thought it was another bout of amoebiasis -- something I wouldn't want to go through ever again. It wasn't anything worth going to the CR for -- although that became my refuge for all my moaning and writhing -- because it was just cycles (or waves) of pain one coming after another, and nothing more. I could have just lied down on my bed fetus-like and moaned, but no, I wanted the psychological comfort of bright white tiles. Then the pain subsided thirty minutes later, enough for me to go to sleep, spent. I woke up this morning feeling funky, my belly hollow and leaden. Mark's cellphone rang. And then he suddenly jumped up. "Love's having a baby," he said. Love is Mark's younger sister. "She's going to Tubtubon now for the midwife."

"Whoa." But I couldn't go. I still felt sick. Mark told me to stay and rushed off.

Later, he texted me that our dog Lara had just been hit by a car. "What?" I texted back. How could that happen, and today of all days? Lara was the sweetest dog, and she just gave birth to adorable puppies! 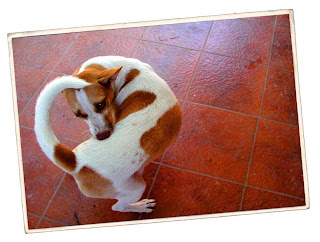 "What about the puppies? What happened?" I texted back some more. There was no reply. Mark was in Sibulan with his mom now attending to Love's giving birth. I remembered I took a photograph of the babies a few days ago when we arrived from Canlaon. They were nursing, and they were the cutest sight.

Who's going to nurse the babies now? I thought. Later, Mark finally texted back. "I have a beautiful nephew." Congratulations, I texted Love.

Strange day. And it's not even noon yet.