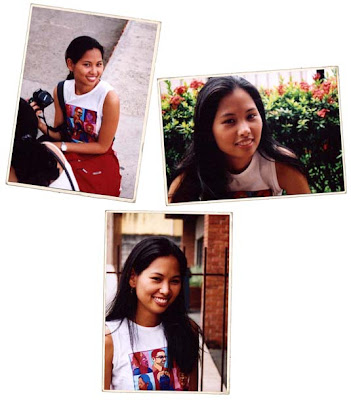 My question is why -- if the stories are true. Because you didn't have to. And I don't suppose you were capable of such thing even. Not you who embodied so much of life, who was the very picture of walking beauty. You were a breath-taking woman, gifted with eyes to see what's beautiful. (Your photos -- each one a snapshot of the ethereal in the ordinary -- showed it.) You wrote moving poetry, were recognized for them. You were a wonderful mother, and a giving friend. You seemed to have led a charmed life. That's why I don't understand. Still, only you could know the depth and the finalities of those last days. I wish I had known. You will be missed, dearest friend.

Here's a recent poem by Ana, which the poet Marjorie Evasco sent me by text:

Not ready for a falling
but here it is: a mango
the size of my fist. Stunned
open by the claim of concrete.
Still green and hard.
But where it began
to accept its ripening,
a flush emerging--
now torn flesh.
Yes, the sweetest places
are first to give, letting run
nectar like tears. Cloying
reminders of what we are
not always able to cling to.