We got back, last Monday, from the cool air of Canlaon City where I had to wonder how short a year could be: was it only yesterday when we celebrated Mark’s win as Hari ng Negros by trooping to the only place open in Canlaon after midnight—a stall in the mountain city’s tsiangge—and had Royal Tru-Orange and an assortment of bread and junk food? That night, the rest of the year seemed to stretch into eternity. “Eternity” didn’t seem to last long: a year, in the long run, is still marked by a finite number of days.

“Here’s to life as a former Hari,” Mark had told me, with a dollop of sadness in his voice. We were on that last stretch to Canlaon with our car winding its way up the steep cliffsides of Vallehermoso. (It was a rainy ride, and at one point the car had skidded dangerously close to the cliffs as Mark navigated our way through the sudden mud flows.) But as I slowly told Mark the moment our car entered Canlaon City proper and we had turned left in the first intersection before the bus terminal, “Some good things don’t last. You had a very good year to reign as Hari.”

He must have took that comment to heart because, in the typically merry and energetic chaos that followed, Mark was there and everywhere in many ways: one minute, he was boosting the morale of each candidate when he could and coaching them on all aspects of preparations, and another minute, going through rehearsals like a studied pro. At one point, observing Mark coaching the candidates what to expect in the preliminary one-on-one interviews with the judges, Gerri Fernandez, the show’s production manager, turned to me and said, “That may be the first time any Hari has done so much.”

But last Sunday night, Mark finally turned over the Hari sword to Bacolod’s Paulo Mirasol, and Canlaon itself marked another difference: there was now a well-lit Julie’s Bakeshop open after midnight, which was not too far away from the pension house where we were all billeted—and for celebration, instead of cheap food, we had ice cream courtesy of executive producer Michael Ocampo. 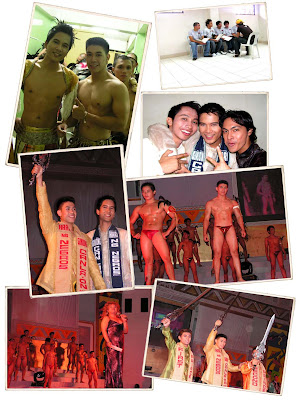 Last Sunday for the loyal Hari crowd and its new fans (one visitor flew all the way from Rome to witness the event) marked a year of both change and continuity. Bacolod’s win marked the first time a representative from Negros Occidental garnered the top prize in the five-year old pageant, which has consistently gone to Negros Oriental since 2003. Previous winners, aside from Mark, include Emmanuel Labirua of Canlaon, Reiven Bulado of Guihulngan, and Paul Brett Orozco of Dumaguete.

But essentially, the spirit of the whole competition remained the same—it was still, as the show’s Friendster page described it, a mythical search for “the Wielder of the Sword of Malaspina, the Guardian of the Gates of Margaha, the Protector of the Golden Salakot, and the Defender of the Code of Calantiao”—a tourism romp, basically, where all participating Negrense towns and cities got to parade their festivals and what-not. “This is not a bikini show,” Mr. Ocampo once said in an old ABS-CBN interview, to separate the pageant from the exploitative nature of other tilts. “Here, brains are what matters most.” Which is basically true—while looks do count in Hari ng Negros, the winner eventually brings home the bacon because of smarts.

Still, much of the recently-concluded show seemed to suffer from what we could call the “growing up syndrome”: at five years old, Hari ng Negros now seemed merely to cruise through the graces of the past four years, rendering last Sunday night’s show to border near ho-hum.

But the fire-show and the volcanic drama in the beginning were great touches, aided by the traditional drumbeats of La Carlota’s drummers. And the candidates seemed all poised enough to give it their all. The question remains, however: where was the oomph? Perhaps it was the fact that the audience this year was smaller than last year’s, reducing greatly the potential contagion of energy of a jam-packed auditorium. Perhaps the reason was the Sunday play date—which might have driven away prospective watchers who had to go to work or class the next morning. Perhaps it was the hurried production, hampered as it was by the concerns of last May’s elections. (Traditionally, preparations start March. This year, it started only last June.) As intrepid host Jude Cabalso tentatively told some of us after the show, there was so much more energy in 2006 than there was this year. Certainly, there was more pizazz last year, and the awesome verbal assault that Mark (and the rest of his court) brought to the rigorous three-tiered question-and-answer portion was noticeably gone, lost in the safe answers of this year’s Pageant Patties.

In the long run, the show was satisfying enough, and the new Hari succeeding Mark certainly looks worthwhile to carry on the prestige of the title. Paulo Mirasol will surely be a good king. His court, which includes First Prince Wilfred Placencia Jr. from Sibulan, a freshman Information Technology student of Silliman University, and Second Prince Joven Gil Magbanua from Canlaon City, a student of Negros Oriental State University, seem worth their salt. Joven, however, was the true dark horse in the race. Many noted how much he had changed two days before the final night: he practically morphed from wallpaper into winnable candidate whose smoldering stance carried him from cut to cut.

Truth be told, Paulo almost “lost” the title when some of the judges (and many in the audience) found his strange audience-rousing antics on stage a little too dramatic (or irritating, depending on who opines), but nevertheless, he was quite a likable fellow and was also easily the favorite to win, having garnered all the major awards including Best Speaker, Best in Streetwear, Best in Swimwear, and Best in Formal Wear. I watched the tallying from the sides and saw how he piled points upon points, distancing himself from the rest of the pack by a long bound. I found Paulo grounded enough to be the next king. Yet, in the beginning of the contest, most of the Internet comments largely ignored him; instead, most people were going ga-ga for Toboso’s Andrew Briz, Sagay’s Marco Angelo Ongsingco, or Victorias’s Paolo Benit. I guess some of us had the “eye,” perfectly in sync with the board of judges that included top international designer Patis Tesoro, tourism magnate Don Ado Escudero, Brussels International Film Festival director Robert Malengreau, society columnist Manolet Teves, and Bacolod journalist Cheri Francis Mendoza (and Visayan Daily Star’s Allen del Carmen, who subbed for Don Ado in the preliminaries).

Another Sillimanian, senior Nutrition and Dietetics student Christopher James Solamillo from Dauin, was declared the Third Prince. Everybody’s bet, Victorias City’s Paolo Benit rounded up the Top Five. I wanted CJ—a great, affable guy through and through—to be in that Top Three so much, and was very much dismayed when he fumbled on the Top Five question given him. Oh, well. He’s already the current Buglasan King, which may be enough to console him. Two other Sillimanians, Amador Colacito Jr. who represented Manjuyod and Marco Angelo Ongsinco who represented Sagay City, were among the top ten semi-finalists who made it from a roster of 25 candidates. Foundation University’s Jake Ragada, who represented Amlan, also made the Top Ten cut.

The pageant, which started simply as the Ginoong Canlaon contest in 2003, has become the most-prestigious pageant of its kind in the country, attracting fans and culturati from all over the country and the world, and catapulting winners into significant media personalities (including movies and television). That may be reason enough for the growing interest heaped on a strange enterprise: a male pageant. But, if you ask those who do follow it closely, it’s more than just that. Hari increasingly seems to be the perfect (and effective) vehicle for uniting two distinct cultures—the Occidental Ilonggo and the Oriental Cebuano—on one common and unbelievably rich island. And if a “mere” male pageant can do that more than silly, muckraking politics, then so be it. Hari it is then.

(Mark has more of the pictures I took in his blog, most of which I should post in my Buzznet soon.)