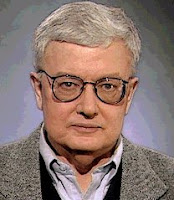 There is a reason for rejoicing for many of us film fans these days: our sage of movie love, the great Roger Ebert whose indefatigable and passionate regard for cinema has guided my viewing habits all these years (but whose long run of Pulitzer Prize-winning essays came to an abrupt halt last year while he took to bed to convalesce from cancer), is back. He has new reviews in the Chicago Sun-Times, and I find myself acknowledging that when he left us to battle his illness, he left a terrifying void. Oh, how I missed those old days when I'd begin most of my days looking up online his reviews of new movies as well as his bi-monthly excursion through the classics in his Great Movies series. When his reviews trickled down to nothing last year, it felt as if I had lost a great friend.

Well, the old friend is back, and is up to his old workaholic streak -- and I'm happy. In his latest yearbook of film reviews, which my great friend Tedo got for me from the chilly winds of Chicago, Mr. Ebert wrote in his dedication: 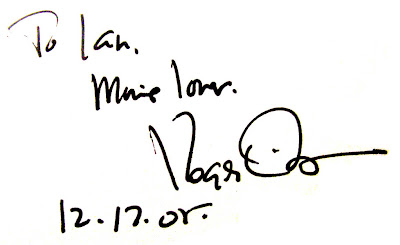 Movie lover... Wow. True, it may a generic dedication he gives to every rabid fan who wants him to sign his numerous books, but I don't care. I like that dedication very much, and I take it as something sacred and personal. And coming from him, it was like the greatest affirmation of my cinephilia, way up there in my fantasies which would include having coffee with Martin Scorsese and Woody Allen, or shaking hands with Steven Spielberg, or listening to Thomas Newman play the piano, or watching Conrad Hall compose his shots.

Mr. Ebert's friend and colleague, Time Magazine's film critic Richard Corliss, wrote a recent tribute to him in light of his coming back to work. In many ways, he manages to paint why there is such a fond regard for the Thumbs Up or Down Man. Here's a passage from that homage:

For Roger knows that, whatever else they may be, movies are stories people tell us; and a review is a conversation the critic has with both the filmmaker and the audience about the power and plausibility of the tale. No one has done as much as Roger to connect the creators of movies with their consumers. He has immense power, and he's used it for good, as an apostle of cinema. Reading his work, or listening to him parse the shots of some notable film, the movie lover is also engaged with an alert mind constantly discovering things — discovering them to share them. That's what a great teacher does, and what Roger's done as a writer, public personality and friend to film for all these years. And, dammit, keep on doing.

Welcome back, Mr. Ebert, (or as Mark calls him: "Si Robert Egert," hehehe.) And thank you for infecting us with this passion for great films.