... And speaking of Arnel Salgado, whose great contributions to literature (rivaling even William Shakespeare) has been the subject of adoring reportage by Jessica Zafra (check out "The Purple Prose of Baguio" -- click here for that essay -- which for me remains as a classic of snide irony from Jessica's first Twisted book) ...

I've just found out that he has a blog, a Friendster account, a sexual harassment case (which was televised in Imbestigador, and of which he has done a Powerpoint presentation with all the gory details, complete with the full sex video, uploaded by him supposedly to exhibit his "innocence."

He also has a new novel: 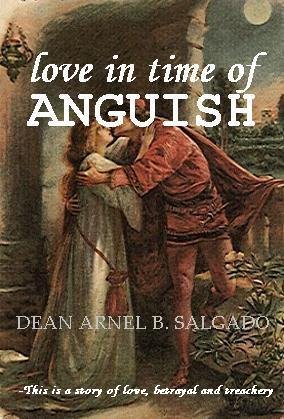 What a life. Absolutely stranger than fiction. Anyway, I bet my intestines that it contains priceless lines* such as these from his celebrated novel, The Fireless Inferno...

"Mirasol... oh... Mirasol, the first time I saw you... I want to own you on the whole endurir!" Full of phantasy Greg whispered. He was been indulged building an air castle, and felt an amusing ease as he imagined the happiness which for a moment he was with Maria Mirasol who was reaching with him the distant sky and together dines on the sweetness of the depth romances...

Or this kind of dialogue:

"Perchance! What perchance? Do you give me another chance?" He asked half afeard.


He describes the book as "a 200 pages moving narration on the rise and fall of DEAN ARNEL SALGADO." This is verbatim, people. No editing here. He continues: "The novel is about the struggle of a 35 y/o man who transformed his anguish and sufferings to become succesful on his career. As a teacher (he became a Principal); as a nurse (he became a Chief Nurse); and a nursing educator (he became a DEAN) - only to fall when he suffered from his tragic and disastrous marriage and fell in love with a 34 year old senior nursing student. This is a story of LOVE, BETRAYAL, and TREACHERY)."

Aside from the two novels mentioned, Mr. Salgado also wrote the classic novel Kidnapped By the Gods, and could be the author of the textbooks Introductory Principles and Processes of Biology and General Psychology.

And remember the incredible story of Faye Nicole San Juan, the Grade 6 student of St. James College of Quezon City, who reportedly won a series of international competitions in Australia and Indonesia? It proved to be a hoax (something even my good friend Patricia Evangelista fell victim to -- Pat wrote about Faye, and tried to defend her "win" when rumors of a hoax started circulating ... until the ugly truth eventually came out). Guess what: Mr. Salgado was the principal of the College then. The Department of Science and Technology invited him and Ms. San Juan to present valid proofs of their claim -- to no avail. (She later made it to the online Museum of Hoaxes though. That's accomplishment!)

Mr. Salgado has a masters degree in psychology (from where?) and was once Dean of the Pamantasan ng Cabuyao in Laguna. Yey to the Philippine educational system.

*the real horror for me may be the fact that I actually have a good friend who writes like this...