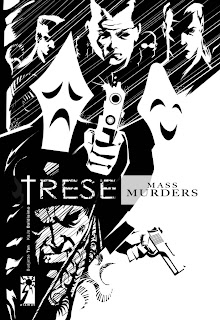 I like Origins stories. In the tradition of graphic literature (komiks to some of you), they're a staple in the narrative, and most superheroes come barging into our consciousness with an Origin story. There's something about knowing where a hero comes from -- what shaped him to become this something -- that's infinitely intriguing and satisfies a hungry curiosity (we all like asking, "Why?"), and when done right, they provide the meat to the mythos without reducing the hero to a caricature of easy motivations. But that's only one thing that I liked about Budjette Tan and Kajo Baldisimo's third installation in their Trese series. Mass Murders, which gives us the curious and very supernatural childhood of Tan and Baldisimo's kick-ass titular female detective of the uncanny, also gives us a look into the origins of Alexandra Trese's fast and furious sidekicks -- the Kambals, those mask-wearing half-breeds who do Trese's bidding with fierce loyalty and an extreme taste for blood. (The horror writer Yvette Tan finds them extremely hot -- and so do I.) There's also the graphic violence which not only takes off from the gut-wrenching ballets of Alan Moore and Quentin Tarantino, but also has the glorious roughness and tumble of old Filipino action movies. But what impresses me most about this volume (two other volumes precede this one) is not just Tan's tight narrative and Baldisimo's concisely conceived black and white world, but also in how they dip into local gods and fantastic monsters and assorted lower mythology creatures of the pre-Spanish Filipino netherworld. In a kind of an afterword, Tan writes: "The works of Neil Gaiman was a major influence when it came to writing Trese, most especially Sandman and American Gods. In those stories, he asked the question, 'What happened to the gods of old? Where are they now?' And he showed us a goddess of love who found her worshippers in a strip club, gods of death who now run a funeral parlor, and gods of mischief still up to their old tricks. Which made me ask the question, 'Where are the gods that were once worshipped by Filipinos before the Spaniards came? Have they found a new place in the city of Manila?'" Which is how they have come up, in this volume, with the bloodthirsty god of war, Talagbusao, whose bloody rituals and wishes to permanently wreck havoc in the mortal realm leads to this book's main plot, as well as to the explanation for the Kambal's existence. I admire this organic and pulsing attempt to bring back the ancient myths and subject them to the creativity, darkness, and demands of the modern world. It was indeed Gaiman who once told us -- when he first came up with the Philippine Graphic/Fiction Awards -- that we have a wealth of local legends and lore that are more than ready-made for explorations in local speculative fiction, and Trese is a good example of that. The last time I was this excited over a similar project was Arnold Arre's The Mythology Class. (Similarly, Dean Francis Alfar and the core LitCritters also have a cycle of stories about a land called Hinirang -- and I have long demanded an anthology of such stories, but only the future can tell whether that project comes to fruition.) And yet, despite the horror and fantasy that make stories like this ghettoed into Genreville, you see reflections of real-life issues and conflicts -- the corruption of civil government and military, the salacious criminality of small-town politicians, the clueless desperation of the law, the mud of chaos that has engulfed the country, which can only be explained through the prism of dark enchantment: this is a land bewitched and cursed, and every malevolent detail that erupts in our lives are the secret explosions of aswangs and duendes and the like. That Trese -- both mandirigma and babaylan rolled into one -- is around with the Kambals in tow gives us relief from our ordinary horrors, at least in these pages. I love this book. I bought it today, and consumed it a few hours later in one go. It is simply begging to be made into a very, very good film that does it more than justice.