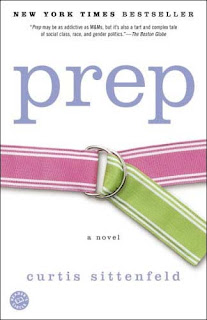 I love Curtis Sittenfeld's Prep. I love how this book is so engaging and delicious, like a perfectly heaped cone of vanilla and chocolate ice cream on a hot summer day. I love its sardonic but wise tone -- that of a woman in her late 20s recalling the angst-ridden minutiae of matriculating in a preppy boarding school in the East Coast, far from the rough and LMC upbringing of South Bend, Indiana. The novel, which is in many ways epic, has the feel and intimacy of a short story -- and Sittenfeld wisely cultivates that feeling by sectioning off her narrative of four years in the life of one Lee Fiora into set pieces, each one an immersive demonstration of a mood and a reflection on high school politics and romances, always with a deep and special knowing of people, places, rituals, and emotions. What keep it grounded are the all-too-human flaws of our heroine -- she is smart and observant, at first painfully shy, often bitter, often unwise, always insecure, constantly flailing to find her place in a universe of seemingly perfect people and circumstances. The book knows human nature so much, and yet also constantly surprises, and does so in prose that is littered with devastating insights, such as this: "There are people we treat wrong, and later, we’re prepared to treat other people right. Perhaps this sounds mercenary, but I feel grateful for these trial relationships, and I would like to think it all evens out — surely, unknowingly, I have served as practice for other people.” Not a lot of books leave me breathless. This is one of them.