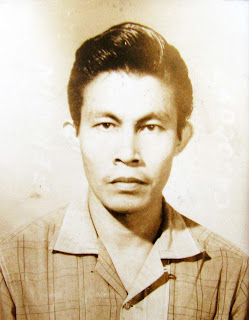 Years ago, I was asked by the writers Gémino H. Abad and Alfred Yuson to submit to an anthology of poetry about fathers and fatherhood in the aptly titled Father Poems (Anvil, 2004). That project, I think, was timed for a Father’s Day release.

The assignment sounded simple—write about your father—but what I had to struggle with, at least initially, was the sudden uncomfortable confrontation of remembering. And remembering is an act fraught with both reconciliation and recounting of past hurts and disappointments—all the dramas any ordinary family is capable of making.

I knew I was not exactly my father’s son. I say that in the sense of familial intimacy. For the longest time, when I was growing up, he was estranged to me, first geographically, and later on, before he died when I was turning 20, emotionally. He was a distant old man who seemed to me possessed by some dark gravity, and I had no patience to understand his tantrums, why he was the way he was, or what was going on in his mind when he would wake up very early every morning and go around the house while we were still sleeping. Was he measuring out, in the dark and bluish light of dawn, what he had made of life? Did he feel that we were disappointed with him—this man who was once young and vibrant and ambitious and wealthy, but who was finally beaten down by strange circumstances to become, perhaps to his own estimation, a shadow? I was a young man in the twilight of his years, and the young never know any better about the varieties of human experience: I only knew the depths of my own narcissistic apathy and the shared disappointments I could not even begin to chart. My father’s name was Fermin. I carry that name, too. It felt then like a burden—like I was yoked to this man whom I could not understand.

Years later, I would write a short story about him titled “The Hero of the Snore Tango” (available now in my short story collection published by the University of the Philippines Press titled Beautiful Accidents) and the first few paragraphs of that story constitute something which I have yanked from reality.

When Father died, the family rose to play its parts as kin bereaved with loss, but rehearsed in its grieving. There was no crying, no fretful skirmishes with acknowledging tragedy—we all knew his days had to end some time. We had played his death scene each in our minds all too frequently, in variations of muted drama. I had imagined elaborations of quiet dark dawns and bursts of hysterics—the way Tagalog movies paint us all.

But it all finally came to this: a hurried waking nudge from Mother one early morning, and one sentence fraught with subdued disconsolation:

We hurried to his room and there he was in bed, mouth slightly open and with eyes closed, his skin already clammy to the touch.

"He’s not breathing," I said, feeling no pulse.

"Is he dead?" Mother asked.

"Why don’t you—I don’t know—why don’t you give him CPR, or something?"


The rest was my attempt in fiction to understand the man, albeit belatedly. And in retrospect, I think I have. In my growing years, I now understand the unforeseen skirmishes life brings you that can indeed cripple one’s spirit—and I know he must have fought hard and long for honor, for respect, for love.

But I did not understand yet fully all these that afternoon when I got the invitation to write poetry about him. I remember looking at the emailed invitation for what seemed like a long time, and then I sat down in front of a rented computer terminal at Scooby’s San Jose St. and wrote the following:

Because, father, there was no chance to believe
In the impossible: the freshly-dug earth, now
Your home, was mute as was usual, turning away
Even the last howl of mourners coming near.
Their black grieving did not understand, as we did, that
Ties which bound could come loose as the grass that
Would feast on your memory six feet above could, as
Ground swallowed-in the digging for mortal remains.
We are told, as the funeral flowers wilted in the sun, that
Memories should be immortal, but we prayed for no ghosts.
The dead should not speak. We prayed, instead: father, we
Forgive you, for you have sinned. And the burial
Became growing silence as we soon dispersed for lives spent
In battled reflections, the muteness of years bearing down
On children struggling to forget by the bottom of
Beer bottles, or the occasional want for punish. Soon, we
Come, year by year, to some bidding, somehow,
For holy days kept precise—that last excuse—to
Listen to some eternal knell your spirit might tell.
Our candles now burn low to capture some
Semblance of closing, the way the ghostly smoke
Wisp among flowers, down to the carabao grass kept
Trim. We wait, and we wait. And life and silence
Become memories built on flimsy hopes, as they must,
To resound to a kind of winged believing.
And then we learn persistence, by the passing
Of days, that even the living must learn to reclaim
Their dead, to Live, to now close
The prayers with which we can finally love
Our dearly departed.

Imperfect poetry from a fictionist. But still. I think I wrote those lines in white heat, although the poem that originally poured from me is a little different now, after random nights spent revising lines, changing one word or four. What has not changed is the ambiguity I still sometimes feel about the man. But that has mellowed. Life itself has taught me how to understand the man.

And yet I know now that I do love this man despite his frailties. He was human. He was me. In my life he continues to live, and I know I must carry on if I want his memory to live on.

There is a picture of him that I keep on my work table at home. It is a photograph in sepia with white borders. He is a young man there—hair slicked back, face impassive but fierce and handsome, collared shirt carefully pressed—and I am struck by the fact that I very much look like him. That photograph keeps me grounded, and makes me remember that love is real, and that it can endure and even blossom even beyond death.

Father, wherever you are, I salute you.

[1] This is Where You Bite the Sandwich