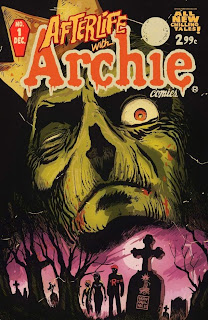 Like with many staples of childhood, the love for Archie Comics is something I think of fondly when I do remember it, but know that it is an artifact from more innocent days you don't really mourn for when you learn to let go. Sure, all those double digests were fun digressions in a teenager's life, and sure, we did learn to somehow sketch out with the ease of over-familiarity the outlines of Archie's orange top (with those strange hashtags for sideburns), Betty's blonde ponytail, Veronica's brunette mane, and Judghead's iconic crown (cap?). But when we let go, we let go. We only returned, once in a while, when we were trapped in some waiting room at the dentist's, and the only reading material handy was a well-worn squarish issue of Archie. In those occasions, we dipped into the old pleasures, often chuckling to ourselves what made us think these storylines were funny. I think the publishers know this, and so it has tried in recent years to put some edge into Archie. They have taken our beloved characters from Riverdale and make them go through some new spin. And the latest is Afterlife with Archie, wherein Hot Dog dies in the very first page, then Sabrina brings him back to life for the heartbroken Jughead -- and unwittingly unleashes a curse where bringing back the dead truly meant that: the undead in Riverdale, in the form of zombies. I heard about this series early this year, but never felt compelled to check it out. Because, like I said, relic from childhood you abandon without much guilt. But for some reason, this week, I found myself reading the first six issues, which completes the first arc of the story, and leads us to the second one that begins with Sabrina in limbo. And yet the first arc was delightful enough, if only to see many of our favorite characters -- Jughead, Ethel, Moose, Midge, Mrs. Grundy, Prof. Weatherbee, Coach Clayton, etc. -- turn to ravenous living dead, devouring everyone during a Halloween dance. But what I liked the best was the scrubbing of humor: this is a serious comics story, almost rivaling the dread of The Walking Dead, although we have yet to turn to the part where the living would prove to be more monstrous than the dead. And the flashbacks, and the back stories, and the first-person narratives from such unlikely sources like Smithers. Archie Comics has grown up, and does it so via a horror trope we least expect it to embrace. It's perfect Halloween reading, and has much to do with teenage nostalgia, and pricking that nostalgia, and welcoming it with perverse delight.