All this talk about media being biased, being “dilaw,” being a force of destabilization may have a purpose after all. They set the grounds and the mind-set for a possible eventual erasure, or at least diminishment, of freedom of speech -- and the formula may be old. It is Hugo Chavez’s Venezuelan media adventure. In the book The Dictator’s Learning Curve: Inside the Global Battle for Democracy by William J. Dobson, we first get a glimpse of the Televison Chavez, a man with a rambling TV show where he rants and lambasts and make bold pronouncements... We don’t have a current national equivalent for that yet, but it pays to remember that Davao would know of a similar TV show for years, something called Gikan sa Masa, Para sa Masa. Now there’s talk of making that a nationwide show.

Is Venezuela’s past our future?

Read the excerpt from the book: 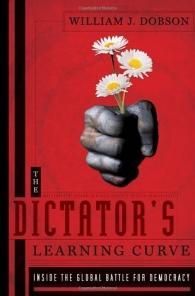 The centerpiece of Chavez's media universe is his unscripted Sunday afternoon television show, Aló, Presidente (Hello, President). Here, each week, Chavez sings, dances, rams, raves, shouts, jokes, questions, reports, prays, and — sometimes — calls Fidel Castro on the telephone. The show has no precise running time, although it averages a little less than five hours. It is a rambling program that resembles a telethon with a heavy dose of politics — a cross between Jerry Lewis and Glenn Beck but with an emphasis on “the socialism of the twenty-first century.” (For the show’s tenth anniversary, he aired a four-day special episode.) Chavez will often use the show to visit government projects, lambaste his opponents, or denounce the United States. As he downs one cup of coffee after another, he unveils new policies and makes bold announcements. Famously, during one episode, he ordered the head of the military to send ten tank battalions to the Venezuelan-Colombian border. Special guests have included Danny Glover, Diego Maradona, and, of course, Fidel.

Although the showman never acts like a head of state, one of the program's more important elements is the picture it gives of Chavez governing. Amid his monologues and impromptu tirades, Chavez will quiz his ministers — whose attendance is mandatory — often berating them for their failings. The Comandante has even been known to fire a minister live on television. The whole lot of them sit among the audience, wearing socialist red, their heads tilted down, praying that they are not called out on a whim. Chavez dressing down a hapless minister for the pleasure of the viewing audience on national television is what passes for accountability in Venezuela today. It is also a vital part of the image making that keeps him blameless for the country's mounting troubles. The message is clear: if the incompetent ministers and bureaucrats would only do what Chavez told them to do, everything would be fine.

If Chavez's antics are unrehearsed, his creation of a media state is anything but spontaneous. It began in the wake of the April 2002 coup. When Chavez came to power, the Venezuelan government operated one state television channel and two radio stations, and Chavez had done surprisingly little to change that in the early years of his presidency. After the coup, Chavez saw the crucial role the media played in shaping events and, in his view, encouraging his ouster. He referred to the four private television channels as the Four Horsemen of the Apocalypse. "[Chavez's government] saw how weak they were after April 11, 2002," says Canizalez, referring to the short-lived coup. "They realized they were a communication minority, so they developed a strategy to create a strong media infrastructure."

In 2004, the National Assembly provided the government with the legal framework to control the media. The government was given broad discretionary powers to punish slander and disrespect of public officials. Defamation of the president can lead to thirty months in prison, and the government has the right to impose hefty fines on any media company for "offending" public authorities. Two of the major television channels — Venevision and Televen — soon changed their editorial stance to fall in line with the government's wishes. Politically objectionable shows were canceled, and the channels’ focus shifted to entertainment. In one telling example, a popular political talk show was replaced with a program on astrology and tarot readings. A third channel, RCTV, was closed, and the fourth, Globovision, remains in a bitter struggle with the government, always under the threat of sanctions. (In October 2011, for example, Globovision was fined $2 million for reporting on deadly prison riots a few months earlier.) Meanwhile, Chavez has poured millions into creating his own pro-government media conglomerate. Today, there are six government television channels, two national radio stations, three thousand community radio stations, three print media companies, and a growing presence on the Internet. “These channels are clearly a propaganda machine of the state,” Cañizález told me. “It is sort of what you would think of the official state TV of Cuba.”

Perhaps the regime's most sophisticated tool has simply been uncertainty. In August 2009, Chavez shuttered 34 radio stations for alleged “administrative infractions.” At the same time, the government announced that it was investigating 240 other stations for similar violations. However, it never specified which stations were under its microscope, nor did it intend to notify them. With the threat of closure already made real, the government knew the stations would do its censorship for it. In such an environment, any story that comes too close to the edge is either watered down or killed. “Their strategy is to keep them on their heels,” says Cañizález. “This is a way that media critical of the government can exist, but always under threat and at a high cost. Because the government doesn't give a clear set of rules, it puts independent media in a constant state of uncertainty.”


Get the book here.