I’ve seen that beautiful synthesis happen many times in Dumaguete over the years, but for now, in the interest of this space, my best example would have to be the local theatrical triumph of Scharon Mani, a small but resounding musical that dared tell the lives of ordinary Dumaguetenos. But more than that, the production skilfully weaved together the artistic threads of various disciplines that thrive locally — the theatricality of the Youth Advocates Through Theatre Arts or YATTA combined with the musicality of the Belltower Project, and infused with the visual feast of a production design by Aziza Daksla, the smart and knowing script by playwright Junsly Kitay, and the moves of choreographer Nikki Cimafranca.

In the worst of times though you can feel lonely as an artist in Dumaguete. In barren moments, you ask yourself, where are the galleries, the street art? The happenings? The film productions? The concerts? The organizations? They are there, of course, if you know where to look — but a common blindness still characterize us as artists in a community. When we finally formed the 6200 Film Society, a network of local filmmakers, one of the things we realized we needed solving was the fact that, despite our love for local filmmaking, we didn’t even get to see, or know of, each others' works.

And the community as a whole is still largely an inchoate one that is saddled with old grudges, stifling disappointments, and hidden agendas — all understandable, all part and parcel to the dynamics of any group, especially artistic ones with incurably sensitive souls. Artists are still humans, after all. We are still getting there, to that vision of a Dumaguete art community that hums and sparkles and works, and we will get there, somehow, soon. 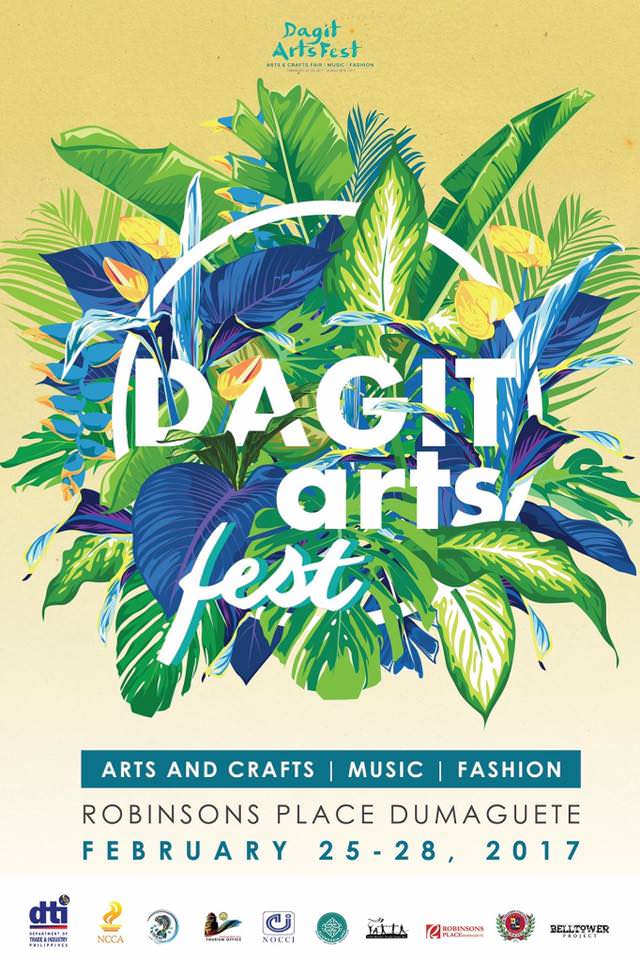 One such miracle of communal undertaking is the Dagit Arts Fest. And today is the last day to catch the best and the most startling art made by local visual artists in Dumaguete. The DAGIT ARTS FEST opened last February 25, in the final flourish to end National Arts Month — or Kisaw 2017, as we call it in Dumaguete. Sponsored by the Provincial Office of the Department of Trade and Industry and coordinated by Gugma Gaia's Raz Salvarita, this is the second year of exhibition of local arts and crafts.

To go to Robinson’s Place to see all these artists and their works gathered together under the festival’s theme of “Istorya Isla” is to see them in their vision of place, in their phase of artistic growth, in their hopefulness that Dumaguete is at heart a haven that nurtures them.

I love several of the works by artists I already know… Danni Sollesta’s “Body Poetry,” a sculptural work in terra cotta, is a delightful and witty Botero-esque piece that somehow awes and terrifies all at once. Irma Lacorte’s “Untitled,” with its circular frame and pen-and-ink finish is a melancholy meditation set in jagged natural geometry. Rianne Salvarita’s “Gaia” is a bold take on an environmental theme that strikes one as being both traditional and groundbreaking at the same time. Babbu Wenceslao’s “Habal-Habal” is a joyful depiction, in terra cotta, of a regular transportation scene — and proves art’s biggest theme: to pull the ordinary into a beautiful defamiliarization. Glory Abueva-Tobias’ expressionistic “Embrace” is a riot of colors and shapes, depicting hazy human figures in that titular act, that is both warm and disorienting. But Jana Jumalon-Alano’s sculptural piece, a gigantic papier-mâché ziggurat of personal mementos, is probably the most breathtaking and towering, literally and metaphorically: it is a piece that intimidates with its size but is also conducive to inviting the casual passersby in examining its intricate nooks and crannies — the small windows scattered here and there, the significance of all the pictures embedded here and there… 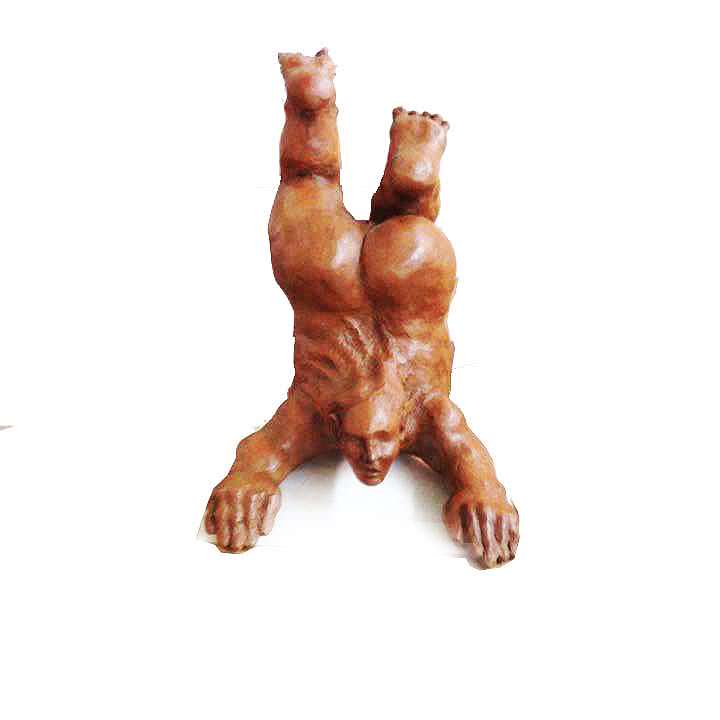 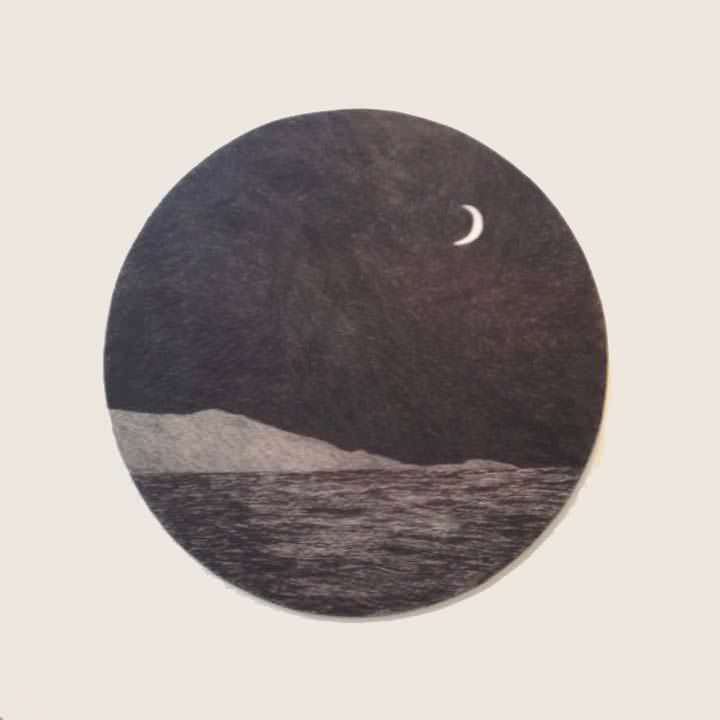 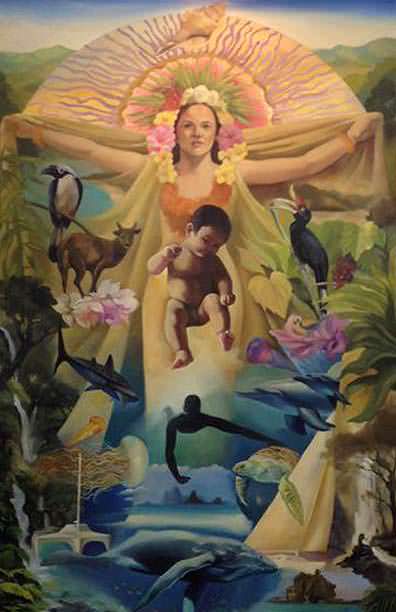 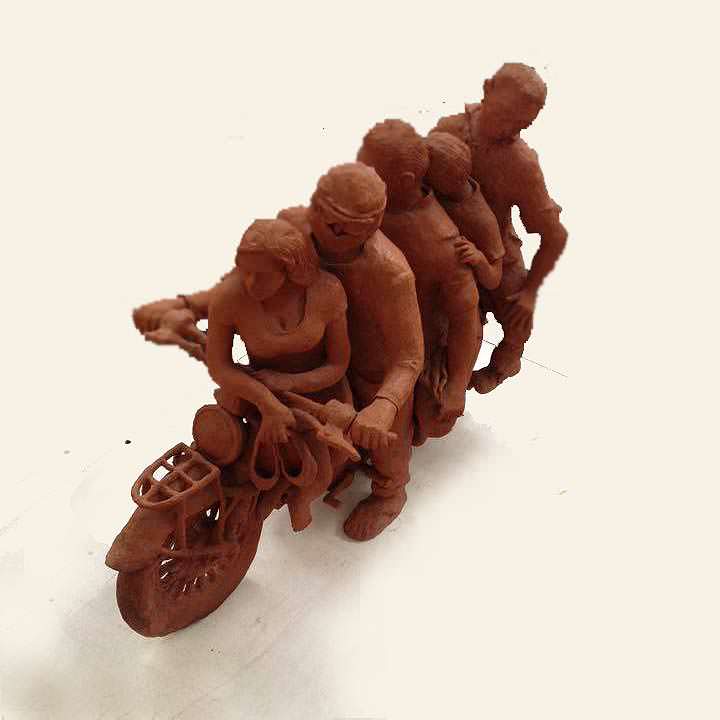 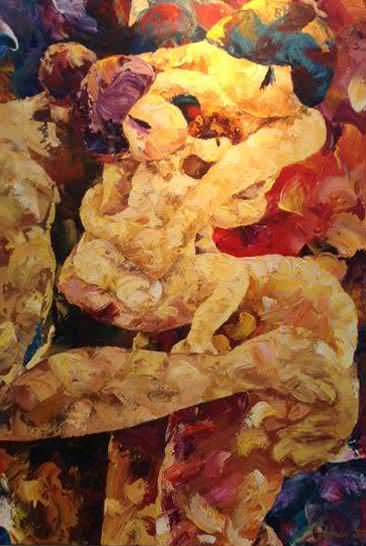 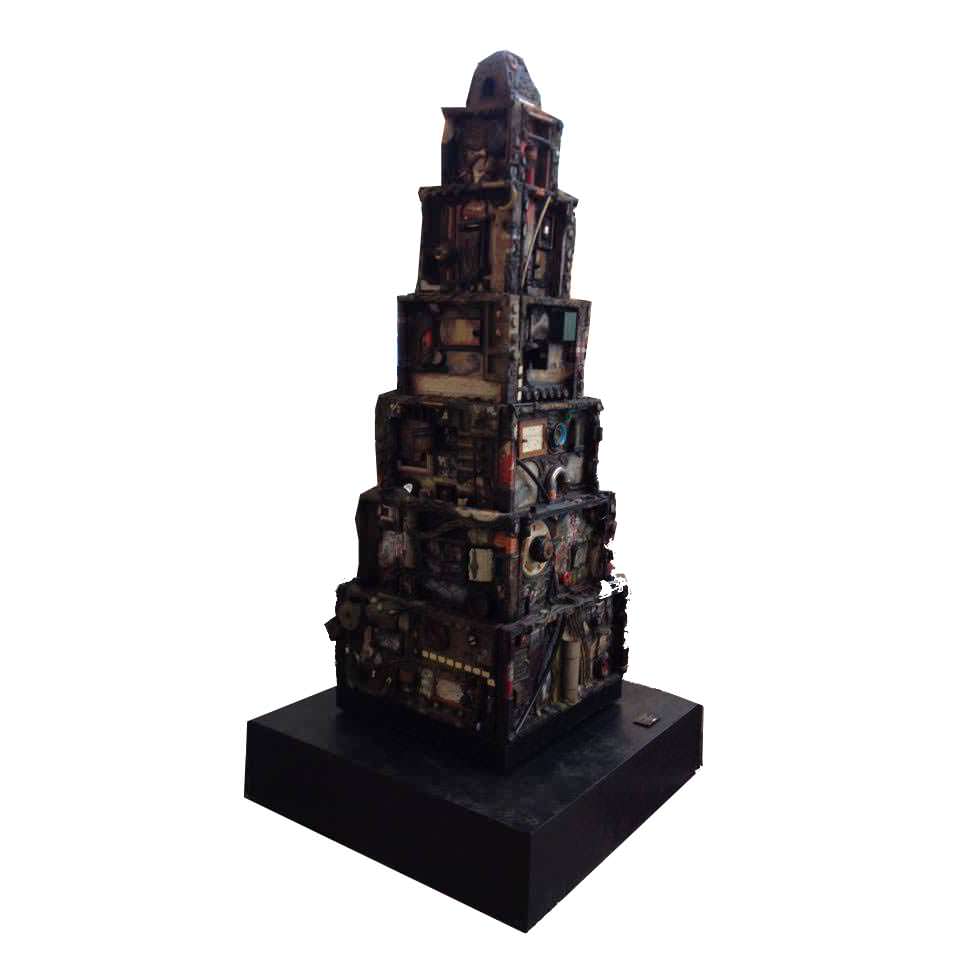 The exhibit also boasts of other artists I have yet to hear more about — and already their works show much promise: the tight representational works of Audie Estrellada and Hope Estrellada, the spare minimalism of Epefanio Mate and Heun Yang, the moodiness of Ken Concepcion, the witty and graphic beauty of Tenet Vanguardia and Grape-Ninja, the whimsy of Wilson John Abiera. 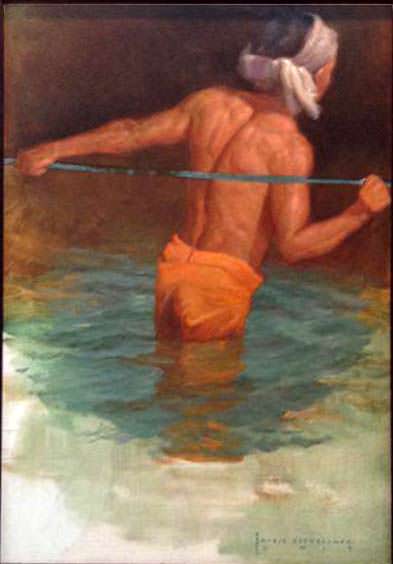 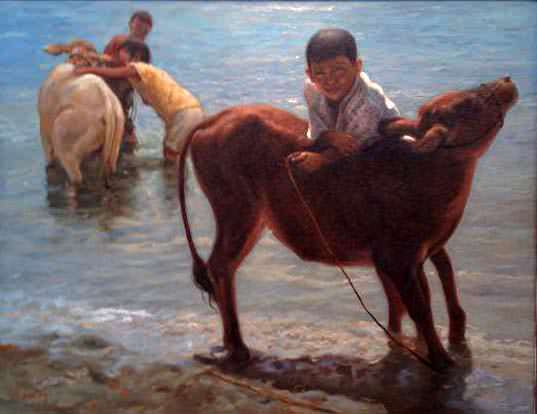 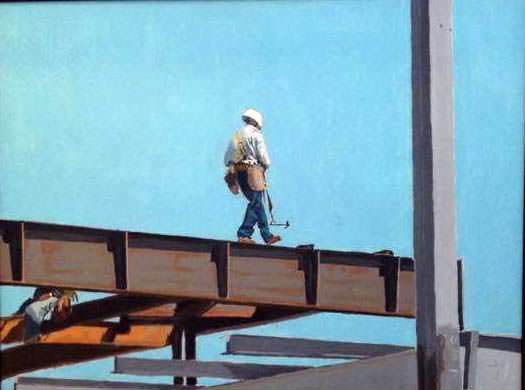 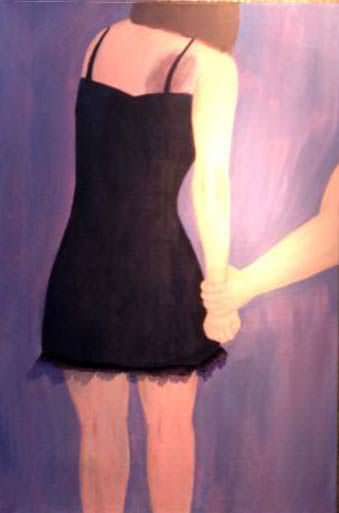 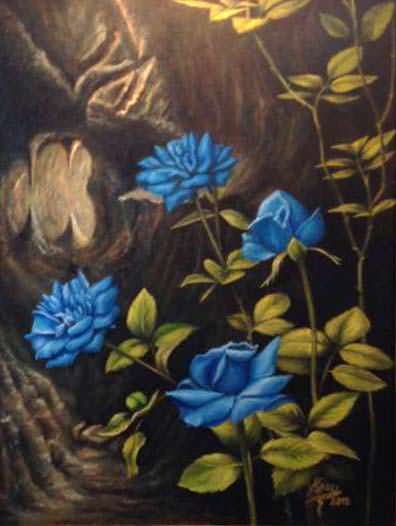 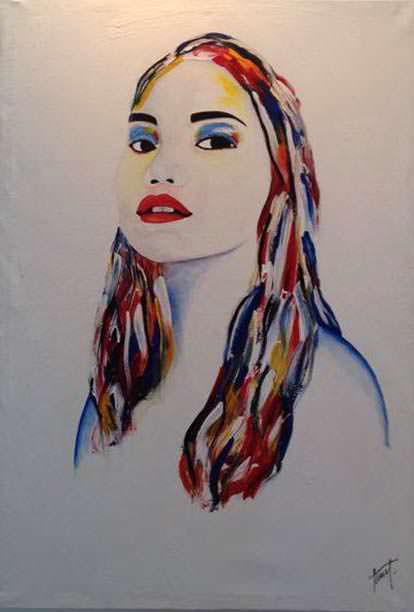 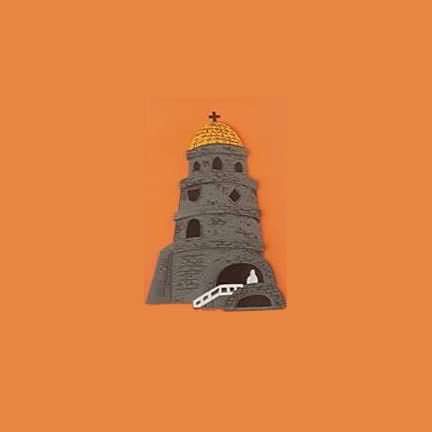 The Dagit Arts Fest feels very much like the start of that community of local visual artists we’ve been waiting for to happen for years now. And it seems to be the seed of an even more considerable anthology of art that is uniquely Dumaguete in the years to come. Mr. Salvarita and all the other artists deserve congratulations for pulling this off the second time around. Our expectations for the next editions are even higher now — and deservingly so.