I have a fascination for “first contact” stories in history. I often imagine these clashes of civilizations in the context of that moment in time—probably an ordinary day, the sun out in the sky, the breeze gentle and cool, the waves breaking on the surf in the usual music of water upon sand. And then suddenly: that first sight of the foreign. The ordinariness of the day belying the momentous repercussions rippling from that point of contact.

In my fiction, I tend to lean towards the fantastical to underline that point of contact. I once wrote, in a short story titled “A Strange Map of Time,” about Miguel López de Legazpi’s men arriving in our island of Buglas in a reconnaissance mission from their anchor off Bohol, and speculated about the fate of their Bornean pilot Tuasan, who would be recorded missing in that venture to the wilds of Buglas. I had him hurling far into the future of Negros Island after a shamanistic ritual, reborn as a sentient child to witness the ravages of the future, and then tasked to find his way back to 1565 to warn the natives of what’s to come with the arrival of the white man. (The story won the inaugural Neil Gaiman Prize, and is collected in my second book Heartbreak & Magic.)

I’m currently writing another story, this one based on an earlier Spanish expedition than Legazpi’s—the 1543 exploits of Ruy Lopez de Villalobos, who named Mindanao “Caesarea Karoli” for Spain’s King Charles who was also the Holy Roman Emperor, and the smaller islands to the north as “Felipinas,” after the prince who would become King Philip II. The latter would prove to be more fateful—the name stuck. But I imagined that naming as being akin to magic, which brings about a curse uttered by a babaylan, which sets into motion the various tragedies in King Philip’s life—including the defeat of the Armada and his eventual death by cancer.

You could say that my speculative reimagining of the Spanish excursions to our shores is my own form of post-colonial revenge in fiction—in both cases having our shamans fight a long-game of comeuppance upon those who dared yoke us into 300 years of colonization.

But I’ve never written about that first real contact [at least with the Spanish] in 1521—Magellan, Elcano, and their men, in what is now being celebrated as the first circumnavigation of the world.

Perhaps someday I will.

But for now, there’s the fact of the Quincentennial of that fateful voyage and the commemorating we are doing in this slice of 2021. This year, the country commemorates the 500th anniversary of the victory at Mactan, the Philippine part in the first circumnavigation of the world, and other related events—collectively known as the 2021 Quincentennial Commemorations in the Philippines, mandated by Executive Order No. 55, s. 2018, which created the National Quincentennial Committee [NQC] for this purpose.

What I like about the way we’ve gone about the commemoration is the Filipino branding, away from the focus on the European, and giving a spotlight instead on local perspectives.

The NQC explains: “The celebration espouses a Filipino-centric point of view of the first circumnavigation of the world, underscoring the magnanimity, compassion, and humanity of our ancestors in helping the starving crew of the first circumnavigators—the Armada de Maluco, a.k.a., the Magellan-Elcano expedition—that traversed the Pacific Ocean, and the courage and bravery of the warriors in Mactan that inspired the heroes and martyrs who founded the Filipino nation and the generations thereafter. / While Lapulapu and our ancestors in 1521 were not Filipinos, we, the Filipinos, are their descendants. Although they existed long before the birth of the Filipino nation in 1898, our pre-colonial ancestors are worthy of remembrance. Thus, we celebrate their ideals, sacrifices, struggles. They are the source of our inspiration. By assimilating them into our national imagination, we are rescuing them from oblivion and colonial prejudices.”

This focus on the local has earned plaudits. Kate Fullagar and Kristie Patricia Flannery, historians at the Australian Catholic University, wrote a few days ago for The Conversation: “European history books celebrate the expedition as a three-year Spanish-led voyage, carrying 270 men on five ships. But Filipino commemorations remind audiences that Magellan died halfway through the expedition in the Philippines and that only one ship with just 18 survivors limped home to Seville. / In particular, Filipinos remember how Lapulapu, the datu of the island of Mactan, inspired a force of Indigenous warriors to defeat Magellan’s crew—and the Spanish threat to their sovereignty—on 27 April 1521.”

They continue: “The Filipino commemorations show what an Indigenous-centred government approach to imperial history in the Pacific can look like. They also sit in stark contrast to the exhibitions, reenactments and publications that marked the 250th anniversary of James Cook’s arrival in Australia and New Zealand in recent years.”

On May 4, Negros itself becomes part of that Quincentennial narrative. The island enters Spanish historical records, via expedition chronicler Antonio Pigafetta, as “Panilongon.”

According to Pigafetta, Samar [written as Zamal] was the first land mass sighted by the explorers on the dawn of 16 March 1521, since their fleet’s departure from Guam on 9 March 1521. This was followed by either anchorage or pass-by in several points: Suluan, Homonhon, Gibusong, Hinunangan in Southern Leyte, Limasawa, Leyte, Canigao, Baybay, Gatighan, Ponson off Cebu, Poro, Ticobon, Cebu [Zzubu] where the first Christian baptism took place, and Mactan where Magellan died. They then fled to Bohol where the ship Concepcion was burned off the shore.

From the NQC: “After the Concepcion was burned down, the remaining ships sailed in the southwest direction, toward Sulu Sea. According to Pigafetta, they followed the coastline of the Island of Panilongon and described the inhabitants to be ‘as black as the people of Ethiopia.’ Francisco Albo, one of the pilots, also referred to the island as Panilongon in his log and located it west of the Cape of Cebu [i.e., Santander, Cebu]. Various scholars identified this place-name as the present-day Negros. The belief that Panilongon is Panglao, Bohol today has been disputed because according to William Allan Reed, ‘...so far there is no evidence that Negritos exist in Cebu, Bohol, Samar, and Leyte.’” 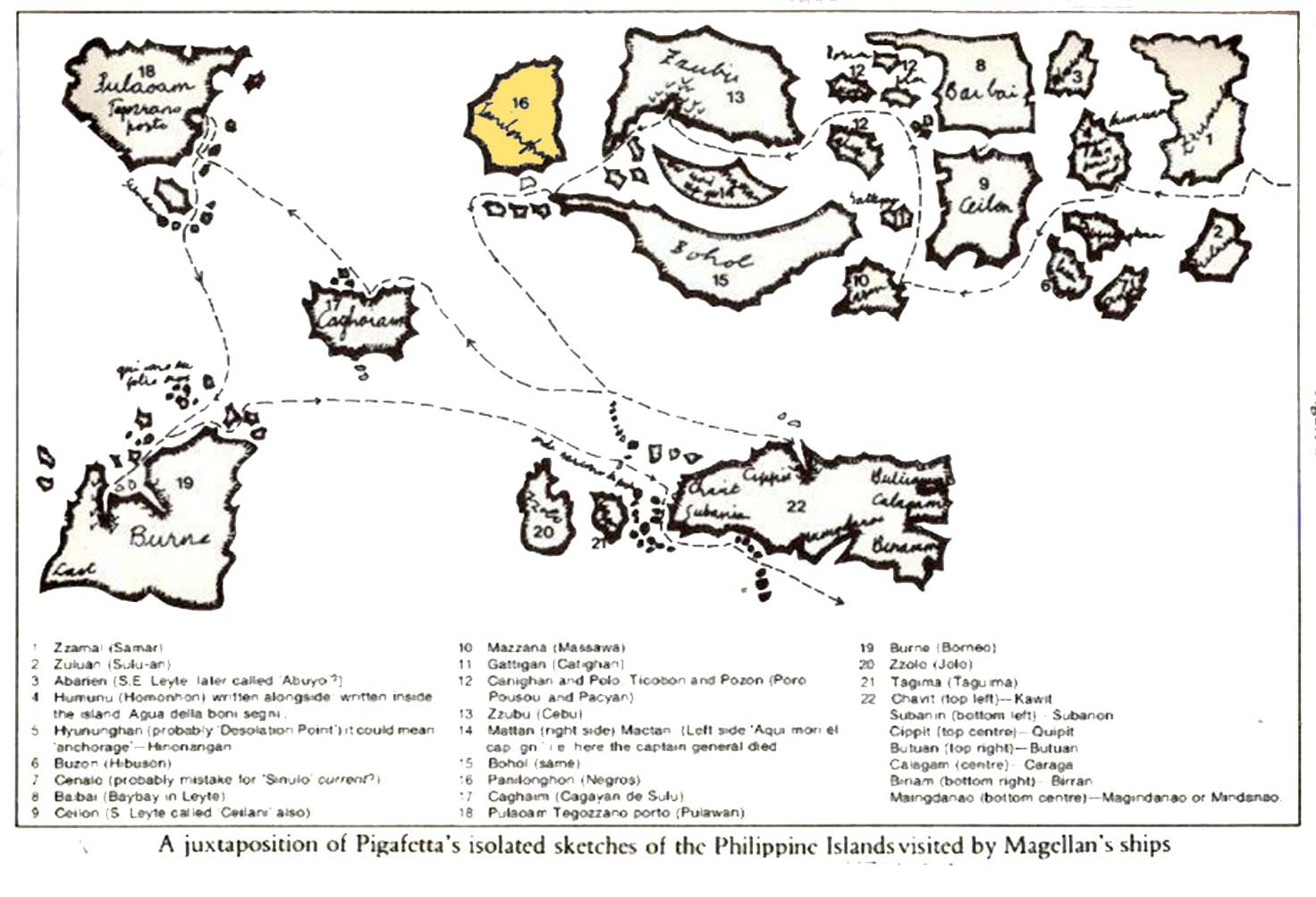 In commemoration of that sighting and identification of Panilongon, the National Historical Commission of the Philippines, together with the City Government of Dumaguete, will be unveiling a historical marker at the Rizal Boulevard on May 4.

This is a much-needed act of remembrance of an important point in our past, something not often told in the general narrative of our history. The 1521 arrival of the Spaniards to our island is part of a crucial turning point in our country’s destiny—for better or for worse. And recognizing this touch point makes us in Negros Oriental feel very much part of the tapestry of the history we probably once thought we were only a peripheral part of. The Panilongon episode of that fateful journey five hundred years ago is important, and commemorating it is crucial.

How? I guess it allows us to have a future with full knowledge of this historical episode. This marker becomes a vessel for future generations to understand where we came from, what we have become, and what we still strive to be.

Because remembrance of history is what truly equips us with how we can deal with destiny. Only when we properly appreciate and acknowledge our history can we truly shape, for good, the destiny of our nation. 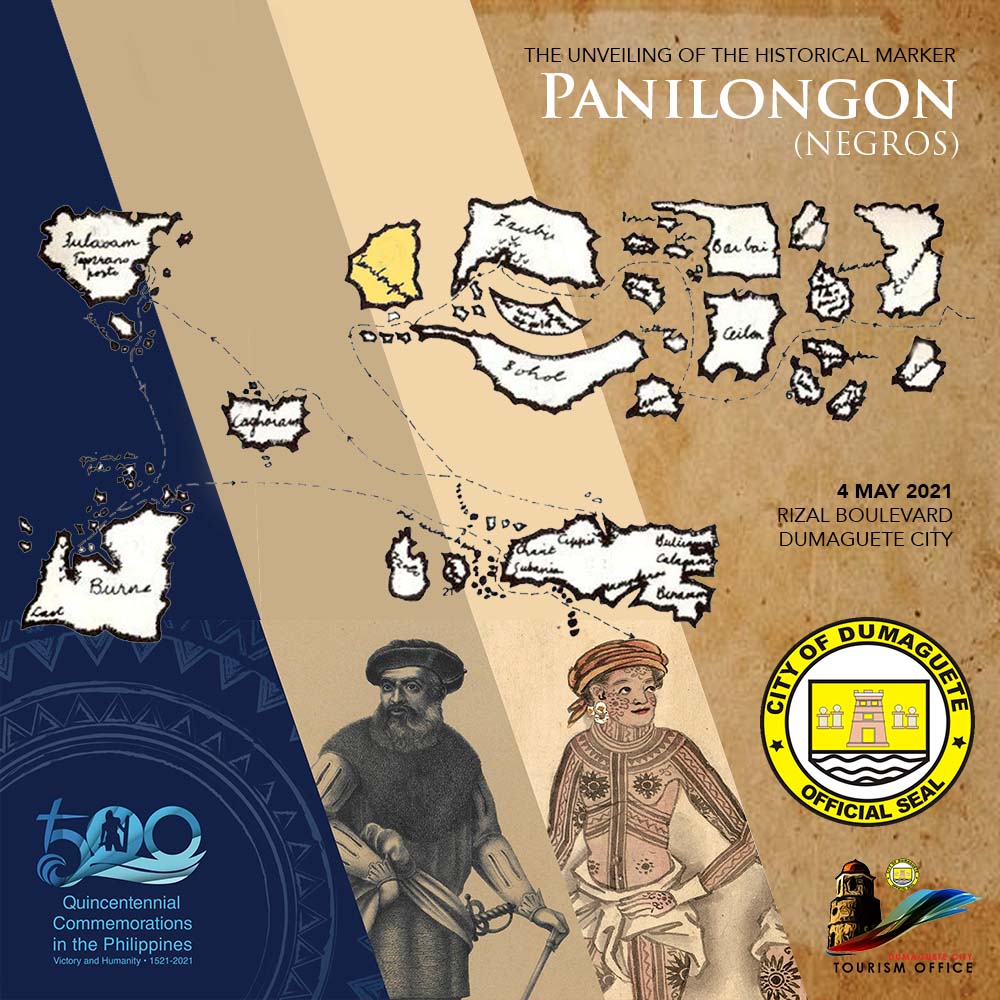