Mouschi was a grey cat with sparse spots of white here and there. He was quick to the ways of the streets, and his sense of curiosity was as strong as his appetite. He was not really mine, but he came to my life sneakily, without warning, from off Aldecoa Drive one quiet May day in 2020—and claimed me as his.

This is the way of many cats: one minute you’ve managed to live life without one of these furry, meowing creatures by your side, and the next minute the only shopping you do at the grocery store is for the cans of wet food they’ve come to expect as their privilege of bestowing you, their human, the right to [sometimes] pet them.

I didn’t even see him the first day he made my dwelling his property. It was the third month of lockdown in Dumaguete, and like most people, I subsisted on long lonely days without company in the solitary quiet of my small apartment, and on what was left of my canned food after that dash of panic-buying in late March. My pantry was all kinds of sardines, corned beef, meat loaves, and the like—which by May outgrew their welcome with my palate. I had grown to actively disdain them.

“Be thankful you have food,” my boyfriend—whom I haven’t seen in about eight weeks—texted me when I complained. “So many families can’t even eat two proper meals these days.”

Of course, he was right.

But I looked at the clump of corned beef before me, and I shuddered.

I did eat—but I knew most of it would end up in the trash. Until I heard the meowing of kittens outside my door. When I peered outside, there were four kittens scrambling about in my patio, their teeny meows a sudden endearing interlude to my lockdown boredom. They must be hungry, I thought—and then I spied their mother cat coming for them. She was a thin white cat with a black triangle on her head—and for some reason, she reminded me of all the cats I had before—a menagerie of kitties with the names of Minggay, Mingky, Louie, Blackie, and more recently a Pusheen. I love cats. I’m a Leo, and on good days I think myself a cat in many aspects of my personality. When I love someone deep enough, I meow at them. I like that cats exist in that negotiation of relationship where they prefer being let alone but can be needy enough at times to commander your attention by rubbing themselves against your legs, or taking charge of whatever contraption you’re tinkling with [a laptop, a piano, a notebook]. I like that cats disdain [and positively ignore] overt displays of getting their attention, preferring instead the simple act of you blinking at them very slowly. They’re low maintenance, most of the time.

But I’ve also resolved not to have pets anymore—at my age, I felt I was done with being Noah, having had a lifetime of caring for just as many dogs, hamsters, guinea pigs, a rabbit, several aquariums of fish, white mice, and once, a cage of lovebirds. I thought the commitment to their welfare was something I felt I could no longer afford to have in my increasingly busy existence—the veterinary necessities, the feeding, the housekeeping.

And so when I saw this white mother cat and her hungry kittens, I felt conflicted with the sudden stirrings of creature love inside me. I went, “Awwww…” and proceeded to feed them with what was left of my corned beef.

But the white cat hissed and snarled, and while it did eat what I was proffering, it was all done in a dance of mistrust and fear. She would advance, then back away, hissing. She was clearly hungry and needed the food I was giving—but to hell with my displays of friendliness. I was not to be trusted. She hissed like there was no tomorrow.

And then, out of the blue, in swept into the patio this grey cat with sparse spots of white here and there. It sidled up to me, rubbed itself against my legs, and ate the corned beef. But the cat was also surprisingly not greedy—he went over to the white cat and the four kittens and guided them over to where the food was.

“You’re such a gentlepuss,” I told him.

And from then on, the grey cat with sparse spots of white here and there was always there in my patio, every lunchtime, every dinnertime, meowing to signal its presence, always alone. When I ran out of canned foods to feed him, I did a quick grocery run to Lee Super Plaza to buy him cat food.

And eventually from the patio, he found himself indoors, made himself king of my apartment, snoozed on what became his favorite floormat—and when it was time to go out [to urinate, to defecate, to mate], he’d meow at me, his soulful eyes looking straight into my soul, and I’d know exactly what he wanted. Science says cats learn to do a specific register of meowing to communicate with their humans—every meowing is tailored, and humans eventually learn to pick up their specific meanings. I’m hungry. I want to go out. You’re hurting me. I need you to rub my belly. I’m ignoring you right now—go away. And when this happened, I knew that this grey cat with sparse spots of white here and there has claimed me.

I named him Mouschi because I was watching The Diary of Anne Frank (1959) around the time he came to me. In that George Stevens’ film adaptation of the real-life travails of this Jewish girl during World War II, there was one fraught scene where, in the tiny attic she hid out in with her family, they all had to freeze in deadly quiet in order not to attract the prying eyes [and ears] of the Nazi soldiers searching the floor below them for human contraband like her. Any false move, any tiny sound could lead to their discovery—sending them all to certain death. And while in that frozen state, their cat—Mouschi—was heedless in his command of the room, his movement here and there a perfect contrast to the still humans, his occasional bumping into things a source of extreme tension for the scene.

When I beheld this grey cat with sparse spots of white here and there, I always said, “What a cat,” and then: “I’ll name you Mouschi.”

It felt perfect. The cramp lockdown of the Frank family in that tiny Dutch attic felt like a reflection of our cramp lockdown in the midst of a pandemic. The enemy for both was kind of a specter: the Gestapo, who could appear any moment, and the coronavirus, which might be invisible, but could strike you anytime. And the Franks and their friends hid for 25 months in their secret annex before being discovered by the Gestapo, while I was already going crazy with my third month of lockdown.

The grey cat with sparse spots of white here and there had to be named “Mouschi.”

“I bet he leads a double life,” my boyfriend told me. “I bet he goes to another house where his name is Gloria.”

I bought him a collar—to tell the world someone’s looking after this cat. I bought him his favorite wet food—Whiskas’ Ocean Fish flavor. I allowed him his freedom to go in—he loved naps—and to get out whenever he wanted. And in turn, he gave me lockdown company.

I didn’t think I needed it, until sometimes, when he’d meow to get out, I’d turn to Mouschi, and say, “Please stay. I don’t want to be alone.” And he’d stay.

He hasn’t been home for a few weeks now. Throughout the spread of the pandemic year, Mouschi was always there to greet us when we came home. He knew the sound of my boyfriend’s car, and would come rushing to us the nights we went home late. Sometimes he’d disappear for a day or two, but he’d always come home, his meowing immense, his appetite intact.

But he hasn’t been home for a few weeks now.

Is he lost? Is he hurt in a ditch somewhere? (He came home once filthy to the bone, obviously a case of him falling into a ditch. When I bathed him, his resistance to the gushing water was meek; he knew he needed the bath.) Is his other family who probably calls him Gloria keeping him to themselves? Is he … dead? We speculate endlessly, but we know the answer is probably not forthcoming.

And so we can only mourn for our missing cat.

He came to my life without preamble, I think to keep me company all throughout those tumultuous pandemic months filled with the demons of anxiety and loneliness. He disappeared exactly a year later—hopefully to give the gifts he gave me to someone else who probably needed them now.

Mouschi the Street Cat really wasn’t mine, and wasn’t mine to keep. But what I’ll keep is gratefulness for his gracious feline company when I needed it without realizing it was a lifeline I didn’t know I could have. 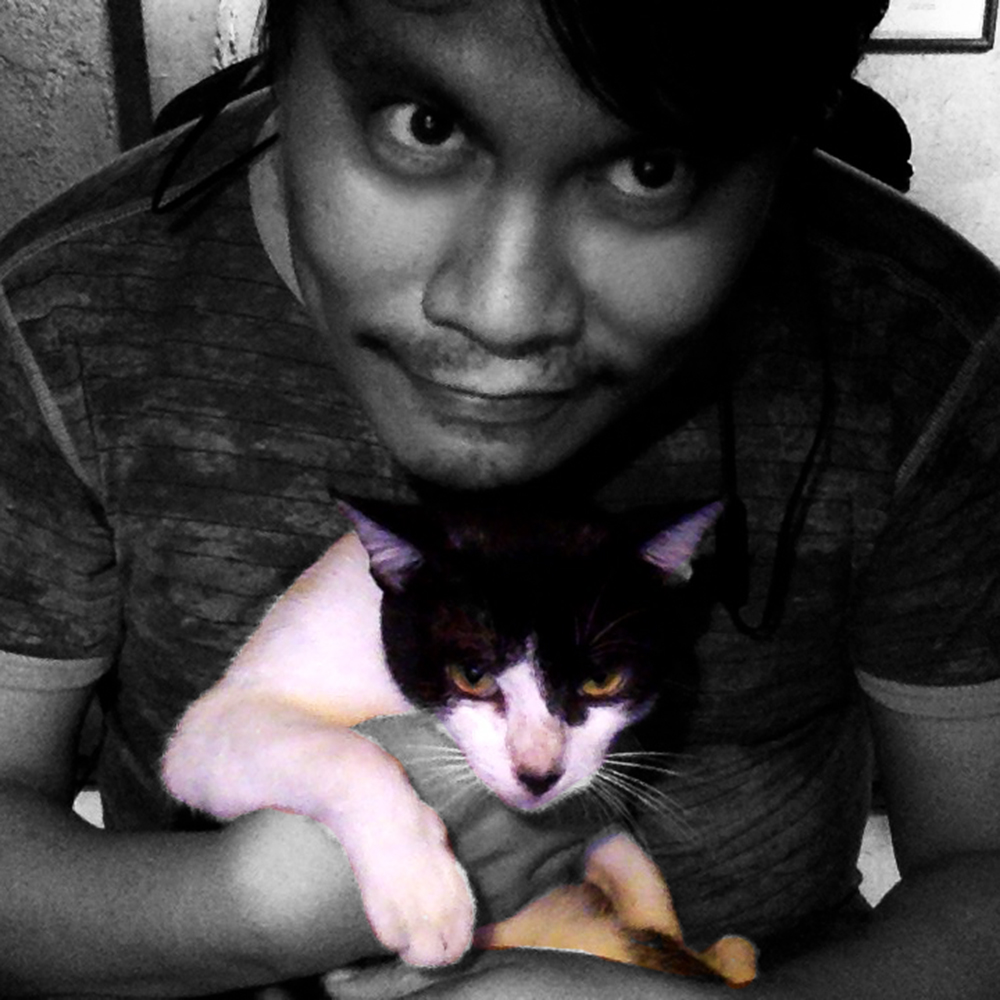