I am tempted to start on a note about veneration—that air of worship that envelops you when you are confronted with an unexpected spectacle that demands stillness, silence, and soulful scrutiny. This is a rare metaphysical occurrence, very personal, and something the French would probably call frisson, a sudden strong feeling of excitement or fear you could call “thrill”—but of a reverential kind. I don’t get this feeling often, and so, when it touches me I am prepared to take and soak it in, to pay close attention, because who knows when this feeling will come again! In the basement exhibition room of MUGNA Gallery, where a show of new terra cotta work by Dumaguete artist Hemrod Duran trails from the main exhibition hall a floor up to this fitting finale, I got my jolt of frisson.

There it was, a set of vertical pedestals in a circle, each one graced on top with pottery baked to a fine dark brown or black finish, and with each pottery bearing faces and sometimes feminine figures. They look like native idols in repose, their faces alternating between harsh and serene. The way they are arranged, with the room’s light concentrated on them and casting everywhere else in suitable dimness, you can be forgiven to mistake the whole thing as an altar. I sat on a bench on one side of the room, knowing I could not move until all these washed over me—and just stared at the whole assemblage, willingly transfixed. There were other people milling about, but I did not mind them. I saw only these beautiful figures in clay, and I was in awe.

There is reverence demanded by this exhibit by Duran—a power I was totally unprepared for, given that this is his first solo show, after years and years of contributing to countless group exhibits and grinding away at his studio at 58 EJ Blanco Drive, giving workshops to interested individuals, and basically carrying on a pottery-making tradition he has continued from his forebears.

It is that sense of continuing, and remaking, tradition that is otherwise the focus of the show, which is ably and beautifully curated by Sandra Palomar who takes us through an engaging journey into Duran’s aesthetics and familial pull. In the program for the show, for example, we see a photo of Duran’s father, Alfredo, at the wheel in 2000, and another photo of the artist himself—noticeably younger in 1998—surrounded by clay pots. All to begin this story of Hemrod Duran being a son of a family of potters in Daro, the famed district in Dumaguete known for many decades as the veritable center of pottery-and-brick-making in the city, a dying tradition of utilitarian art that has given rise to this newfound popularity of clay as medium for artistic expression. Hemrod Duran is the embodiment, so to speak, of this tradition and for this transition. “While Duran was trained to craft a myriad of objects in his childhood,” Palomar writes, “so has the public been taught to value bricks, pots, and vases solely for their function.”

Palomar goes on to state that what Duran has done is to “[dodge] the nostalgia of tradition.” How so? She gives an overview of the pieces in the exhibit that showcase this melding of tradition/transition: “Upturned pots become iconic portraits. Interlocked cups resemble a disengaged hornet’s nest. Brick slabs impersonate a sea wave wall. Sight of a new aesthetic appears in a surge of tentacles installed as the exhibition’s showpiece: dismembered protrusions of a cephalopod…reveal the nature of the craft—a constant mediation between pliability of clay and the transformative power of fire.” In other words, you still see traces of the old utilitarian bent Hemrod Duran grew up with in Daro, but with this new outlook over what else he can do with clay—now claimed as an artistic pursuit—the pieces become something else entirely: an expression of an artist’s vision. 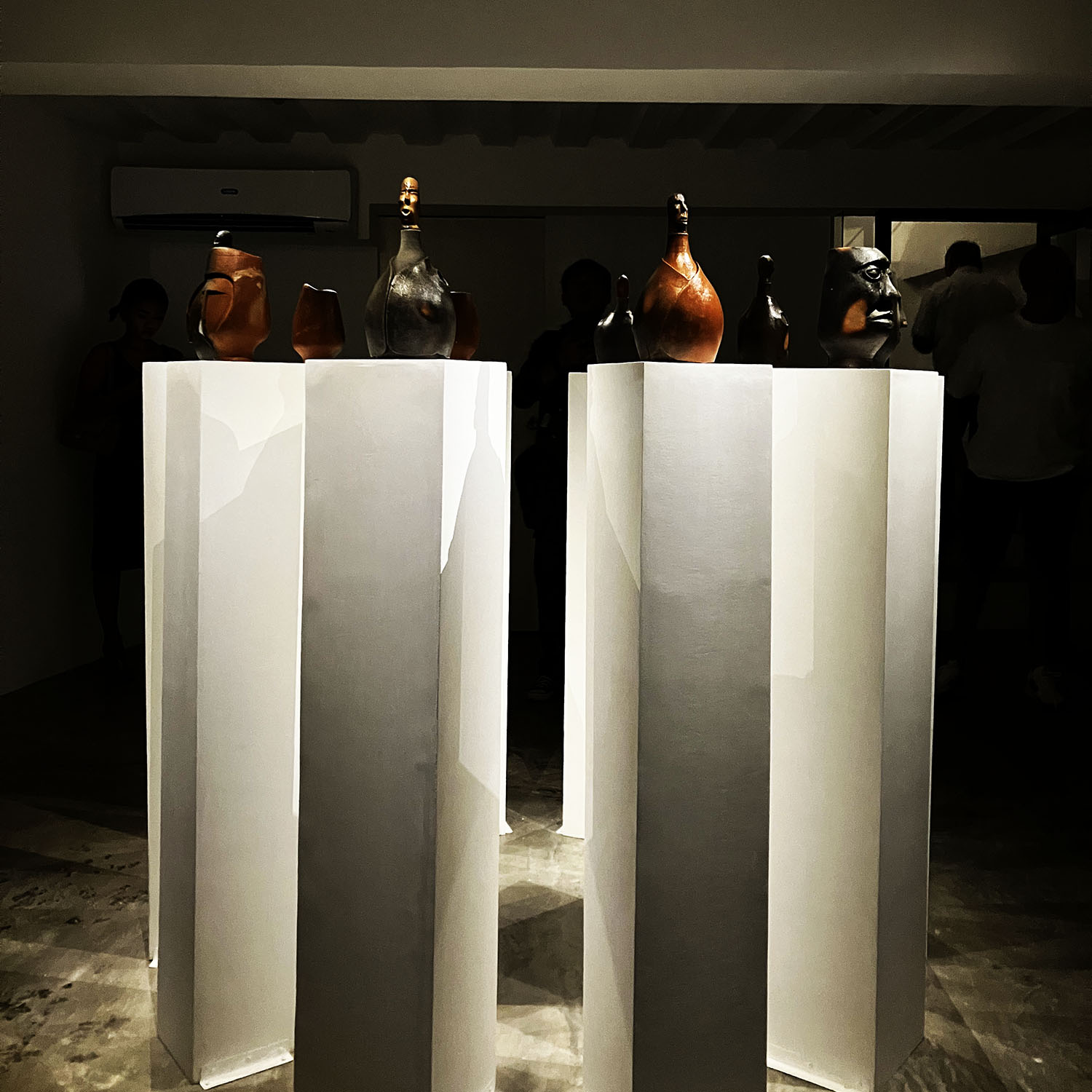 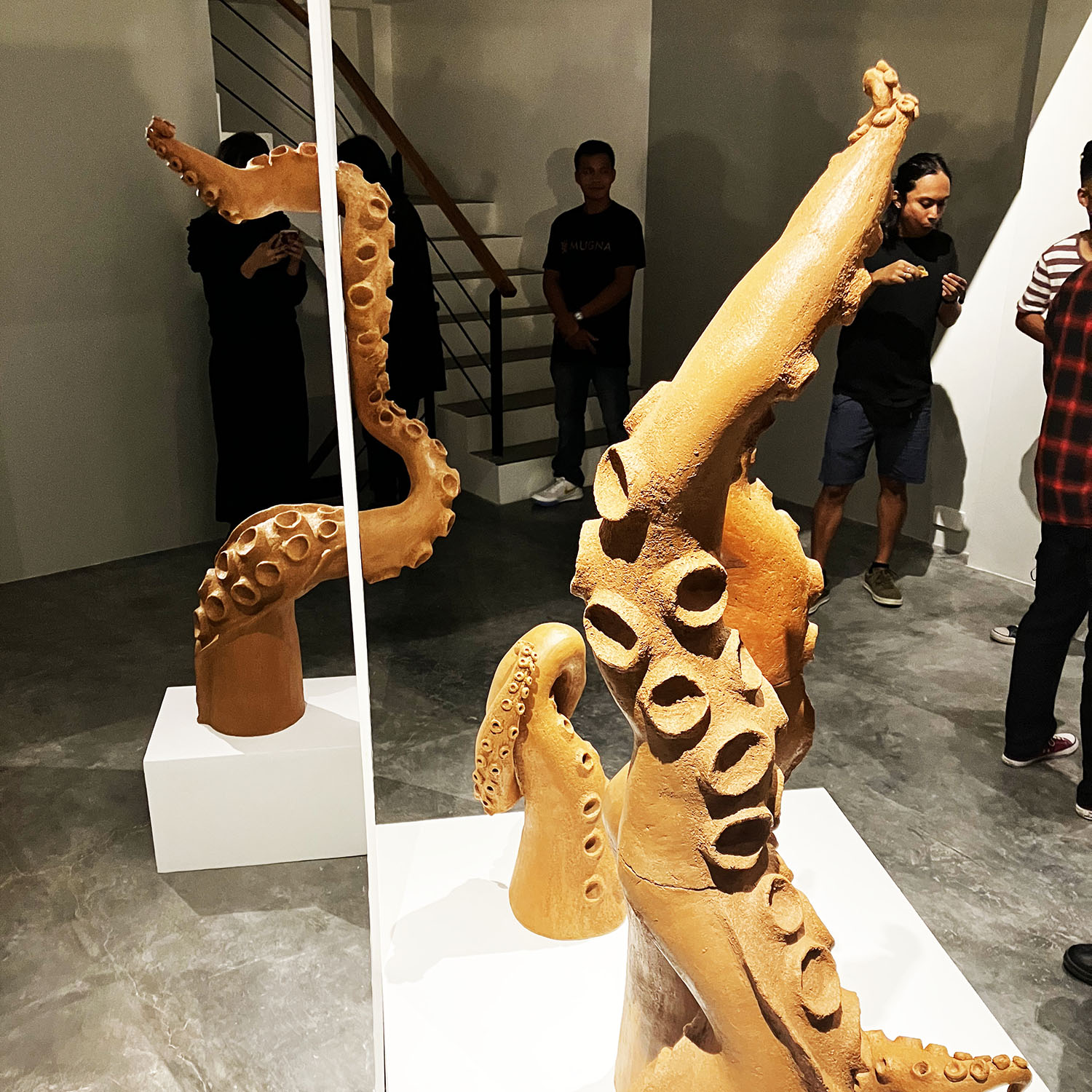 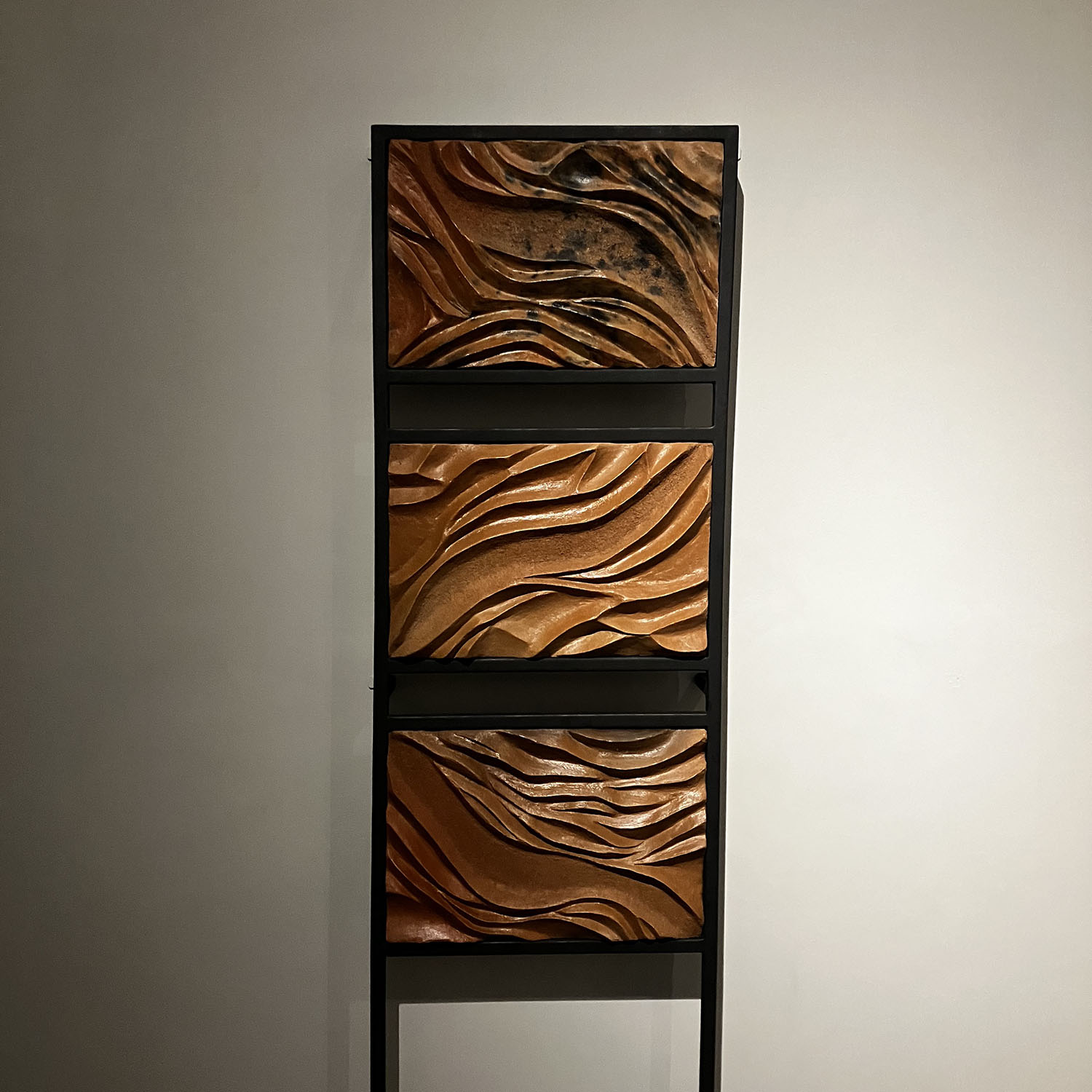 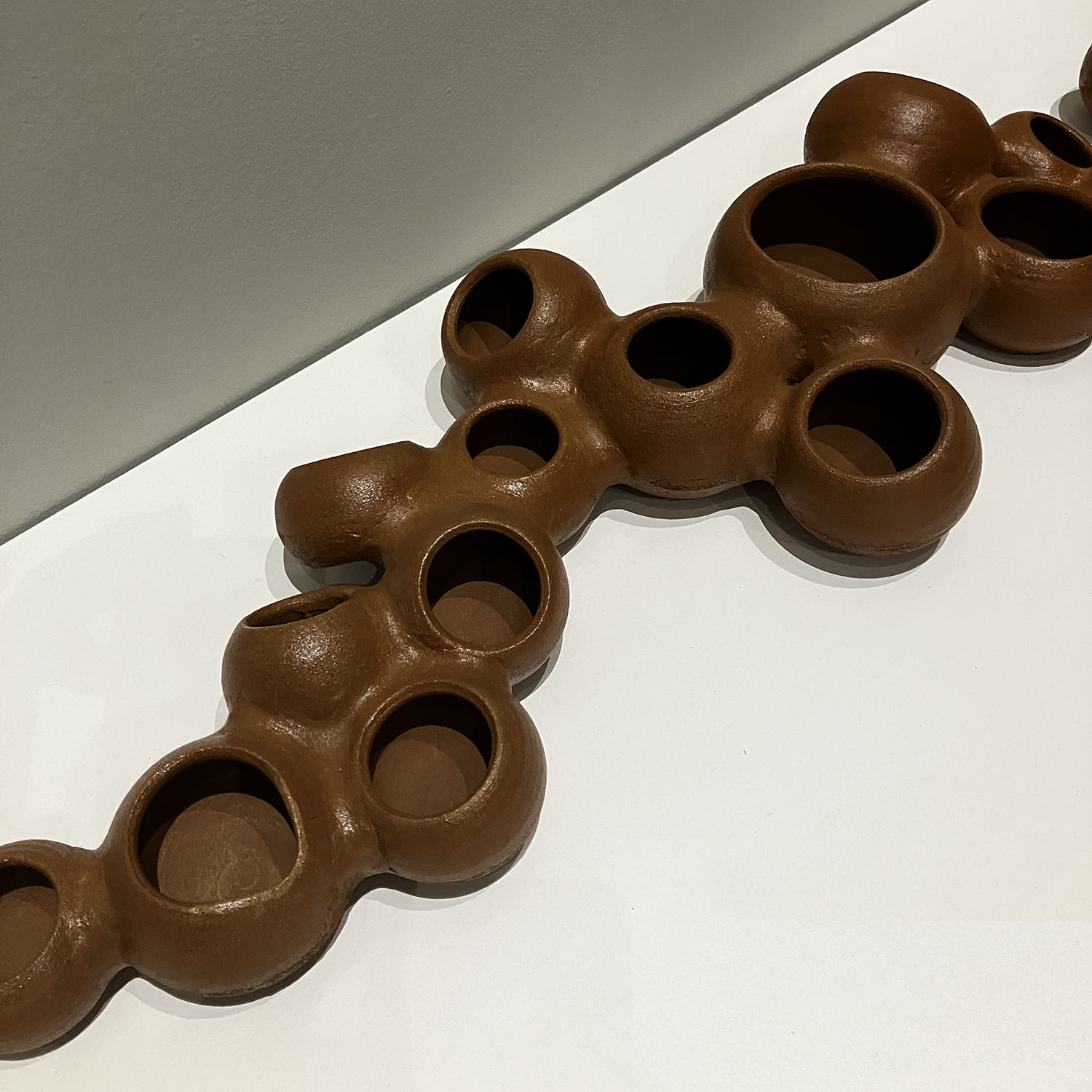 I never usually ask artists what they “mean” with every piece they create. But looking at the various installations Hemrod Duran prepared for this show, I do get a sense of what Palomar notes as the artist exploring that fertile creative ground between tradition/transition. Those small clay cups that melt into each other are the perfect example of that: you can still see the utilitarian vessels if beheld individually, but as an interlocking mass, they posit something else—Rorschach implements that beguile. For me, I couldn’t help but note the fluidity that the “melted” cups present to me—a playful contrast of hard material with soft representation, something that I could see in the other pieces: their undulating textures like the pattern of water on seafloor, or their sinewy body as in that cephalopod.

This is one of the best shows MUGNA Gallery—located at Uypitching Building along Jose Romero Road in Bong-ao, Valencia—has come up so far since opening last June, and I’m just happy that it has happened to Hemrod Duran, a local artist who truly deserves this showcase. The exhibit runs until December 11.

We occasioned a different kind of “reverence” last Friday night, November 18, at the El Amigo Art Space along Silliman Avenue. This one delights in the worship of the body, in the cathedral of juxtaposed iconographies that marries the sublime and the perverse.

Russ Ligtas’ My Skull is My Cathedral is a kind of homecoming for this Cebu artist who has long ago made Dumaguete his regular stop for various performance art happenings. [Full disclosure: I curated his first performance art show in Dumaguete in 2010, which he collaborated on with Razceljan Salvarita for the Silliman University Culture and Arts Council—perhaps the first such show of its kind in Dumaguete.] Also a poet and a visual artist, Ligtas takes pains to make this particular show a provocative piece, certainly perfect for a Friday night in Dumaguete if you’re in the mood for performance art that’s outrageous and sensual. The title is an invitation to think of the piece as a kind of religious commentary with a hint of the morbid—but at the same time, you think: what are cathedrals really except architectural vessels to consolidate worship? This kind of worship, however, is a totally different animal. The body is the cathedral.

My Skull is My Cathedral is set to the live, hypnotic electronic music of Budoy Marabiles and Raymund Fernandez—a maddening blend of kick drum beat, synthesizer, and saxophone, which pounds us into submission into watching this spectacle of half-naked man masked as a sigbin prancing about the space in gyrations that recall porn, and surrounded pointedly by a mix of religious and gay iconography [including naked Ken-like dolls in a pile]. It certainly is an audacious show, positively the gayest one we’ve had in Dumaguete in many years—and the very reason why it had to transfer from its original venue [which will remain unnamed to this one in El Amigo. I dare say that the change of venue was a blessing—only El Amigo could have accommodated this show. When Ligtas starts his performance, solitary in the art space’s confines and viewable only by the audience through a wall of glass, that aquarium-feel lent it seedier multiplicities of meaning—think a Bangkok massage parlor, or an Amsterdam red-light district window.

When we are finally invited to view the art installations inside, we see those aforementioned dolls, and we see on the wall canvasses in wood print depicting the artist’s faceless and naked body in various juxtapositions that recall Hindu iconography. There are many levels to this show, to be honest.

Ligtas has traveled this piece around Asia and Europe, and it’s certainly a privilege to witness this one in Dumaguete, even if it may not be everyone’s cup of tea. One cannot help but feel both breathless and bothered by the whole thing—but I’ve always liked these kinds of provocation. If only to give me that frisson that is so increasingly rare in a world content with banality.

Such a flighty thing, this frisson—but to get it twice within a week, via the earthy, sinewy grace of Hemrod Duran’s terra cotta work, and via the provocations of Russ Ligtas’ performance art—that’s a rarity I want to celebrate. 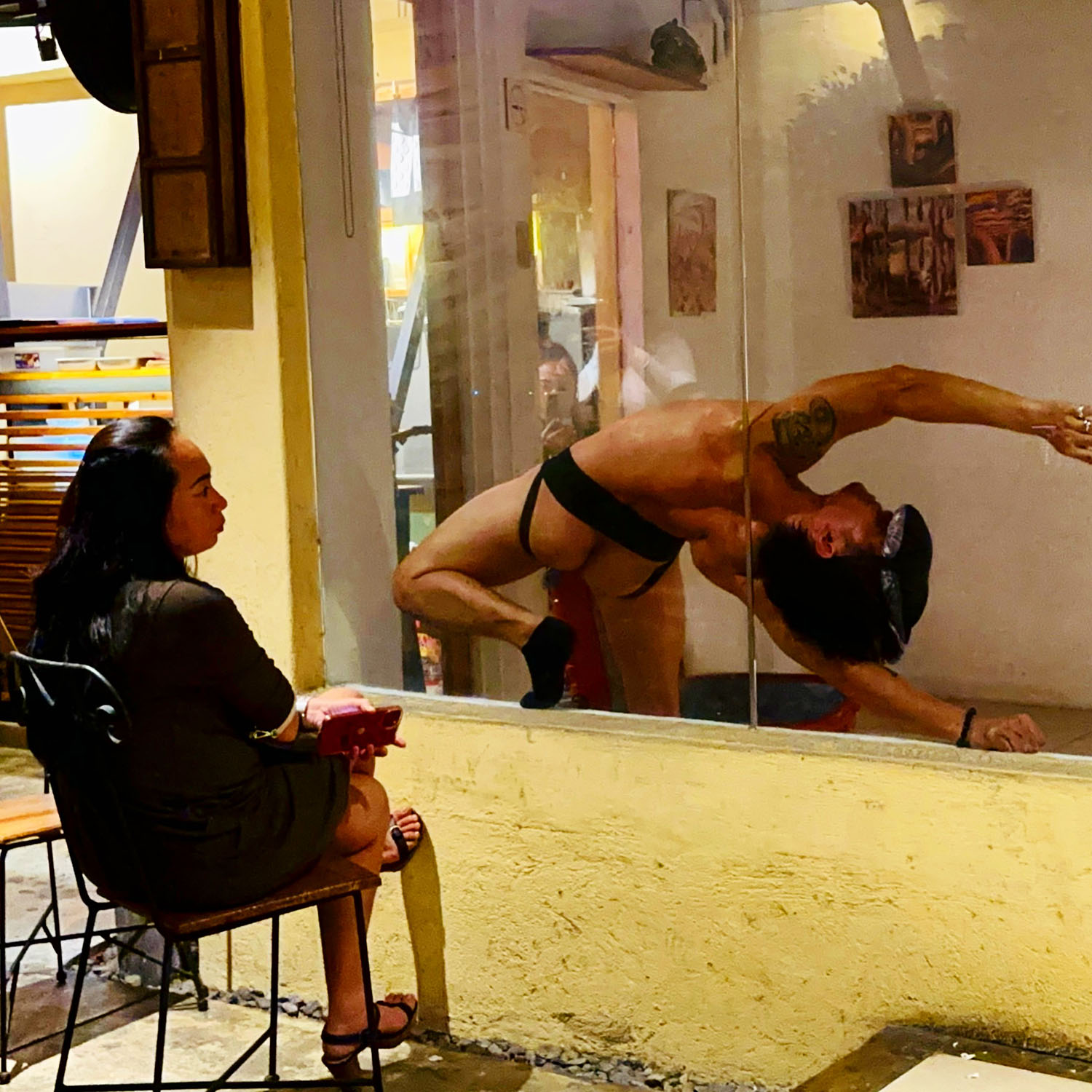 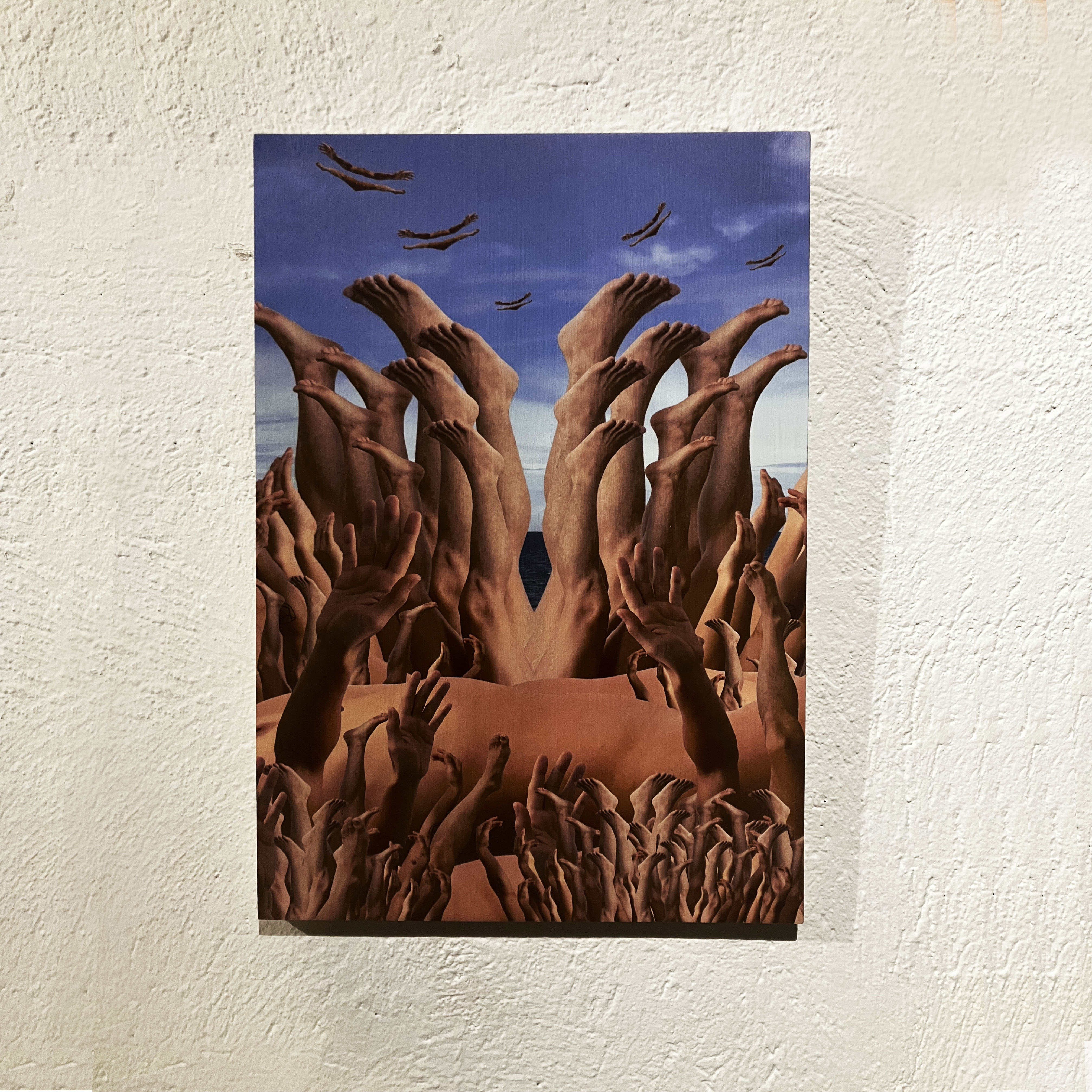 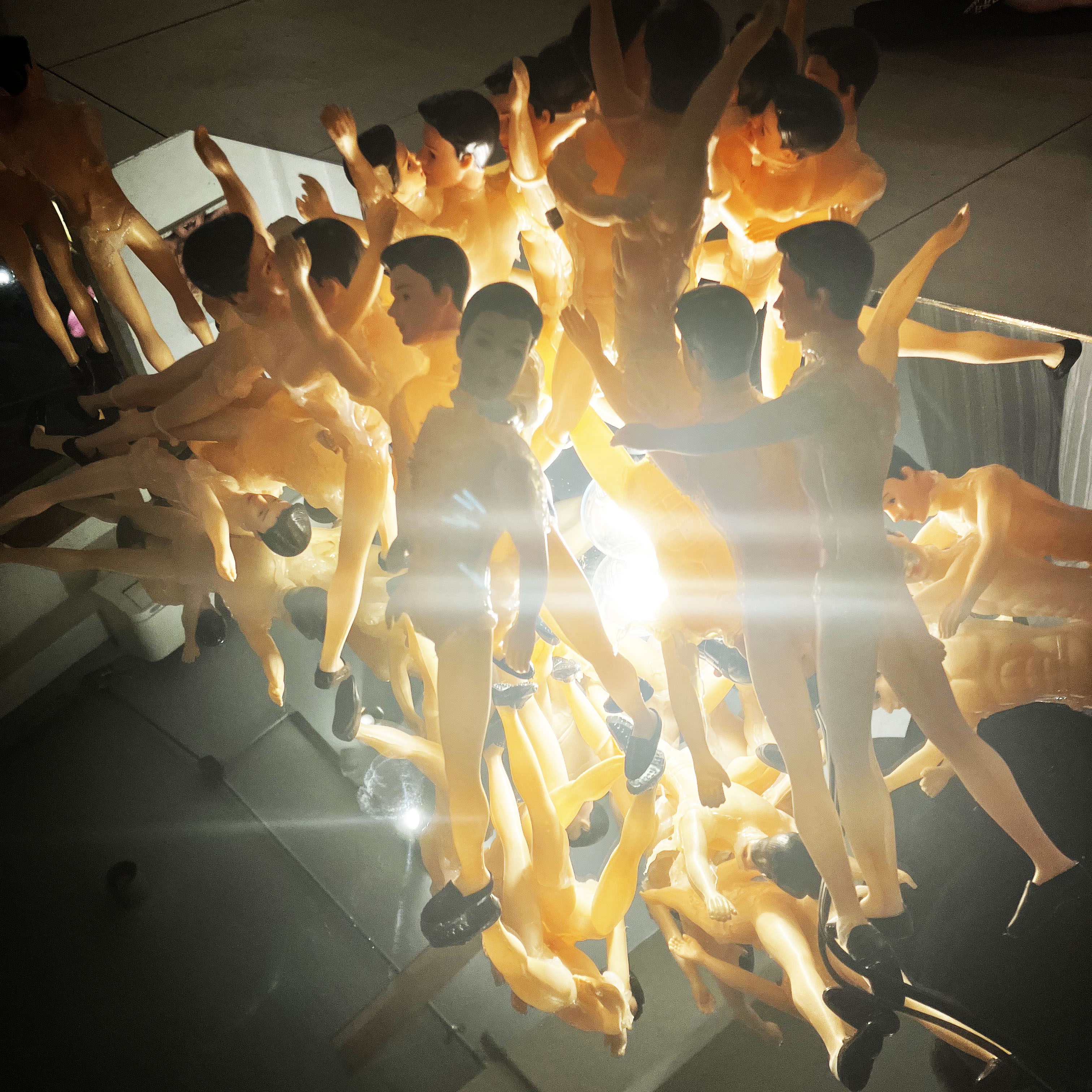 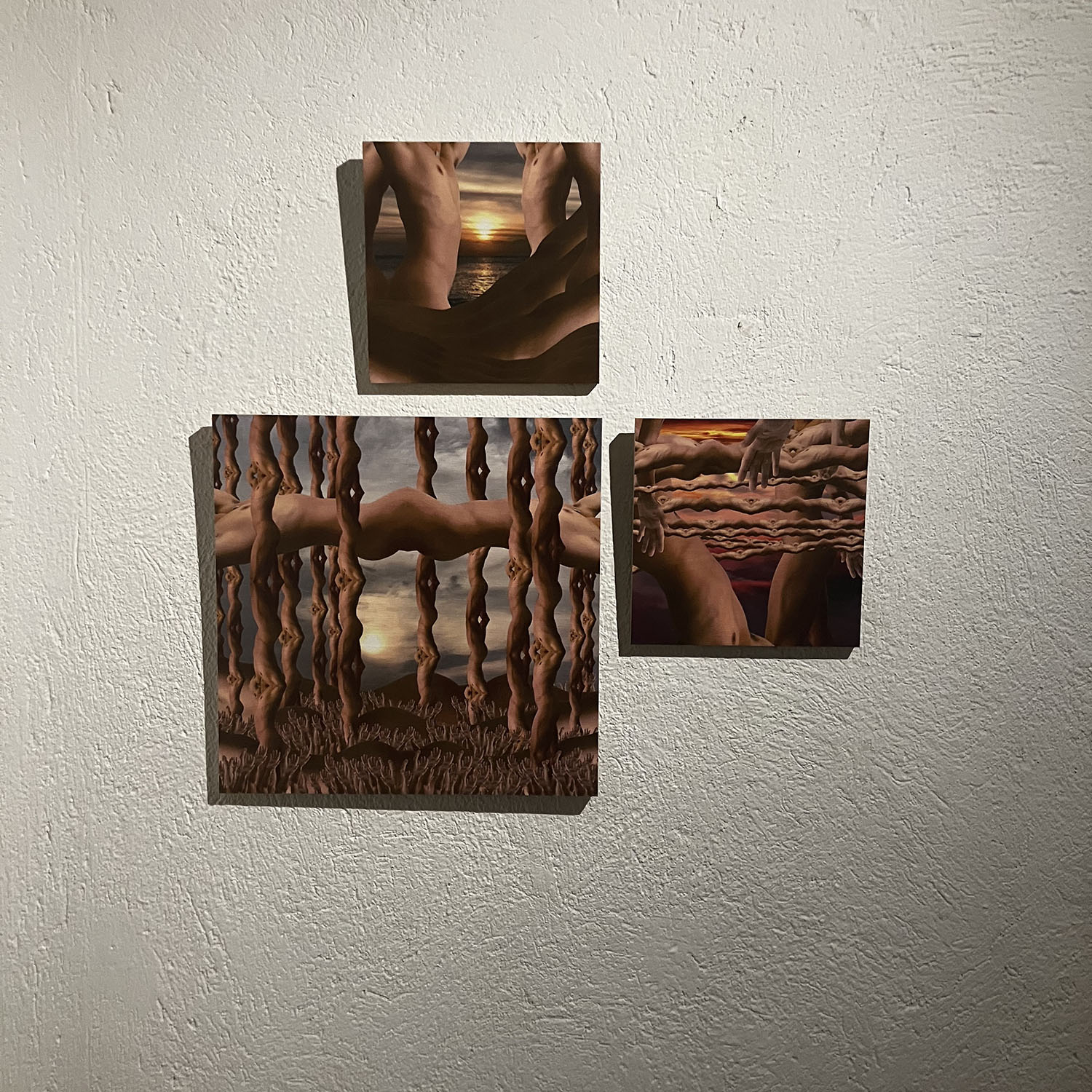