When Hugkat Journal was conceived sometime in 2017 as one of the flagship projects of the newly formed Dumaguete City Heritage Council, with Dr. Earl Jude Cleope as the founding director, it had always impressed me as being almost a sacred duty. Let me try to explain it this way. Every city (or town for that matter) that people consider to be truly memorable springs from an ideal: the place is culturally grounded and aware of its history, so much so that it is able to create an entire creative industry around that sense of history and culture, and at the same time able to give its population a prideful sense of place. This is the same for almost every city of note all over the world. Thus, if a tourist comes over to your place, and asks you what are the significant spots to visit in your locality—and if you answer by pointing to a mall, you’re hopeless.

But this is the thing: heritage and history are considered to be very important, but they are also flighty things that are easily forgotten by people. And they are easily forgotten because there is almost no effort to concretize them in the public consciousness. No histories, no publications, no constant attempt at remembering. Almost none, anyway.

When I was growing up, I became more enamored of my city and my province because I was somehow able to read up on histories put out by Caridad Aldecoa-Rodriguez and T. Valentino Sitoy.

Dr. Sitoy’s history of Negros Oriental, for example, published in 1993 in Kabilin, was a truly riveting piece of historiography—and I learned so much about my province from that. Prof. Rodriguez’s portrait of Don Diego de la Viña, the liberator of Negros Oriental from the Spanish in the last throes of the Revolution, also allowed me to go beyond the usual Tagalog-bound stories of the KKK taught by my history books in school, and enabled me to see the specific peculiarities of my province in that revolt against Spain.

But who remembers Don Diego de la Viña today? There is a marker for him at the M.L. Quezon Park, and that’s it. Even the road named after him in Dumaguete is not on the road he literally marched on when he entered the capital all the way from Vallehermoso.

The more I studied local history and heritage, the more I felt that more needs to be done—or else we fall into the trap of being a city that counts progress only by the presence of malls and what-not. Let me ask you a few trivia questions…

Where is the nearest archaeological dig that gives us a clear picture of a rich Iron Age culture in pre-Spanish Dumaguete? [Answer: Magsuhot, Bacong.]

When was Dumaguete officially founded as a pueblo? [Answer: 1620, which makes the city about 402 years old.]

What is the name of the Dumaguete parish priest responsible for fortifying the settlement starting in 1754, which allowed the locality to escape for good the constant pillages by southern pirates? [Answer: Fr. Jose Manuel Fernandez de Septien.]

Who built the campanario on the ruins of one of the towers built by Fr. Septien starting in 1867? [Answer: Fray Juan Felix de la Encarnacion.]

Who filed the bill that led to the charter of Dumaguete as a city in 1948? [Answer: Sen. Lorenzo Teves.]

The last one actually leads me to a musing: we barely know the biographies of all the statesmen of the province, and all the presidente and mayors that have served Dumaguete since the American Colonial Period. We have forgotten what each administration has accomplished to shape the city the way it is now. This is sad. For a city that loves to call itself a University Town, this conspicuous lack is very, very sad.

All of these spurred me and Dr. Cleope into forming and framing Hugkat Journal, which first saw print in 2018. We aimed it to be a repository of the best historiographies we could find that could track the story of Dumaguete and Negros Oriental in terms of history, culture, and heritage. On December 7, we were finally able to produce a box-set of three volumes containing a veritable treasure of local historiography. 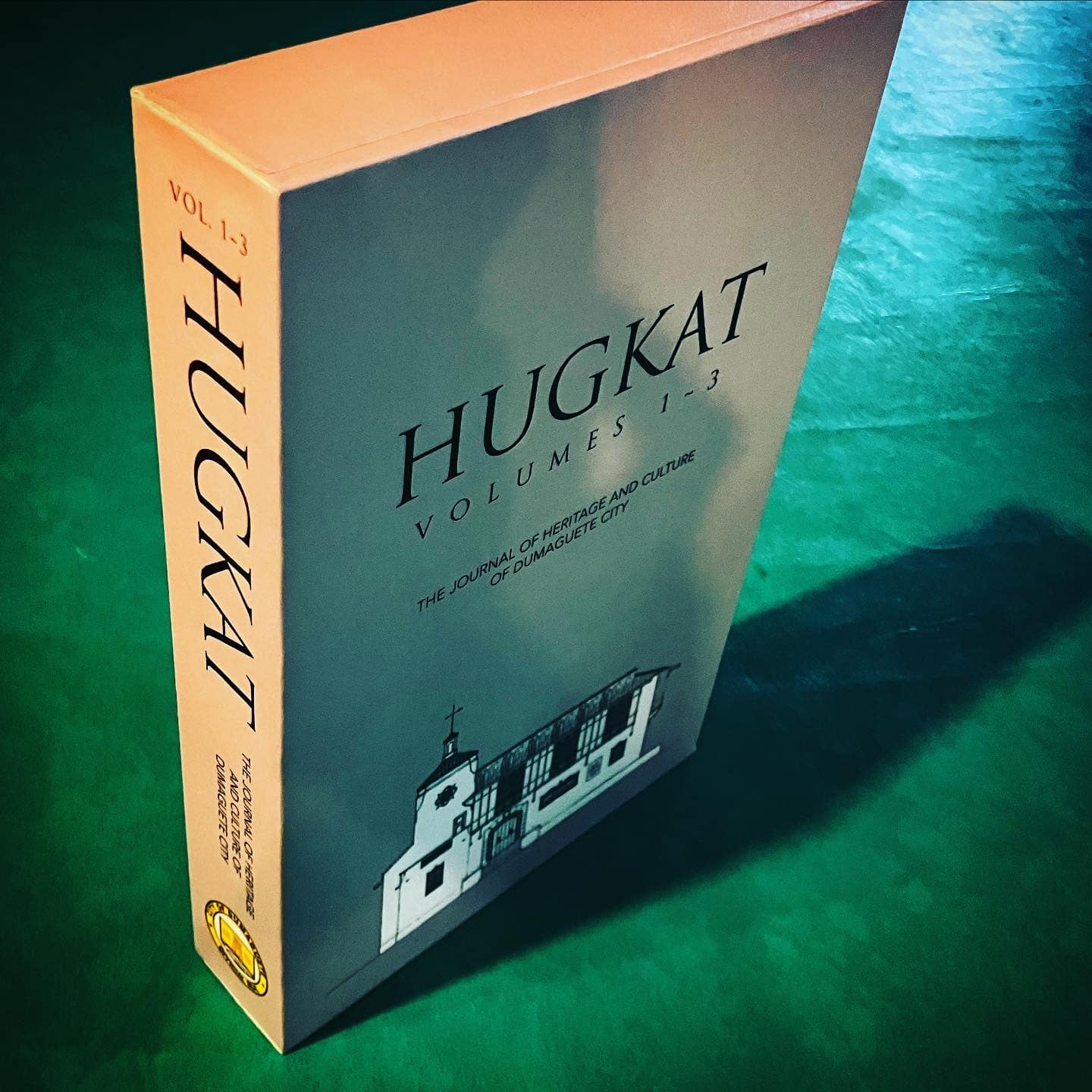 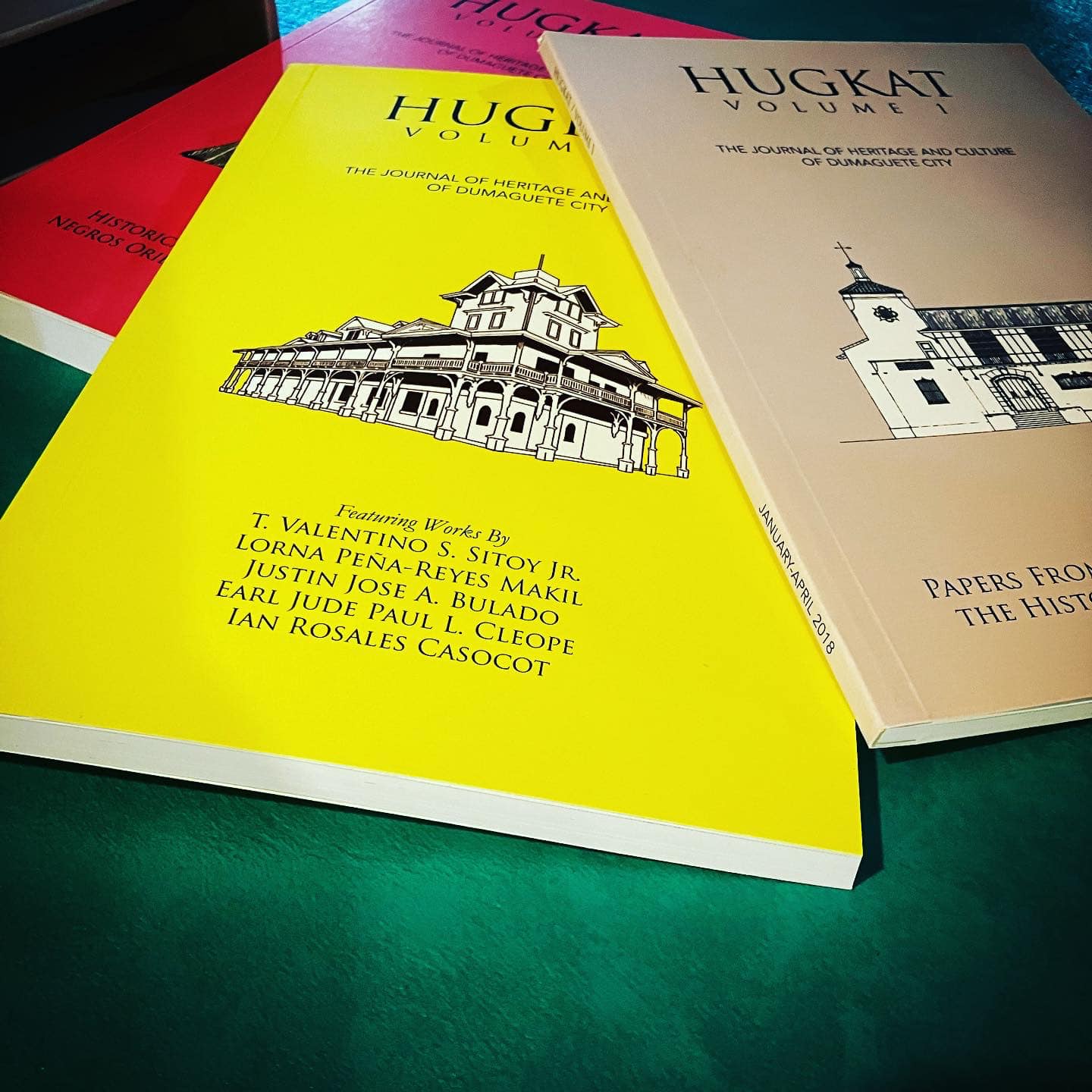 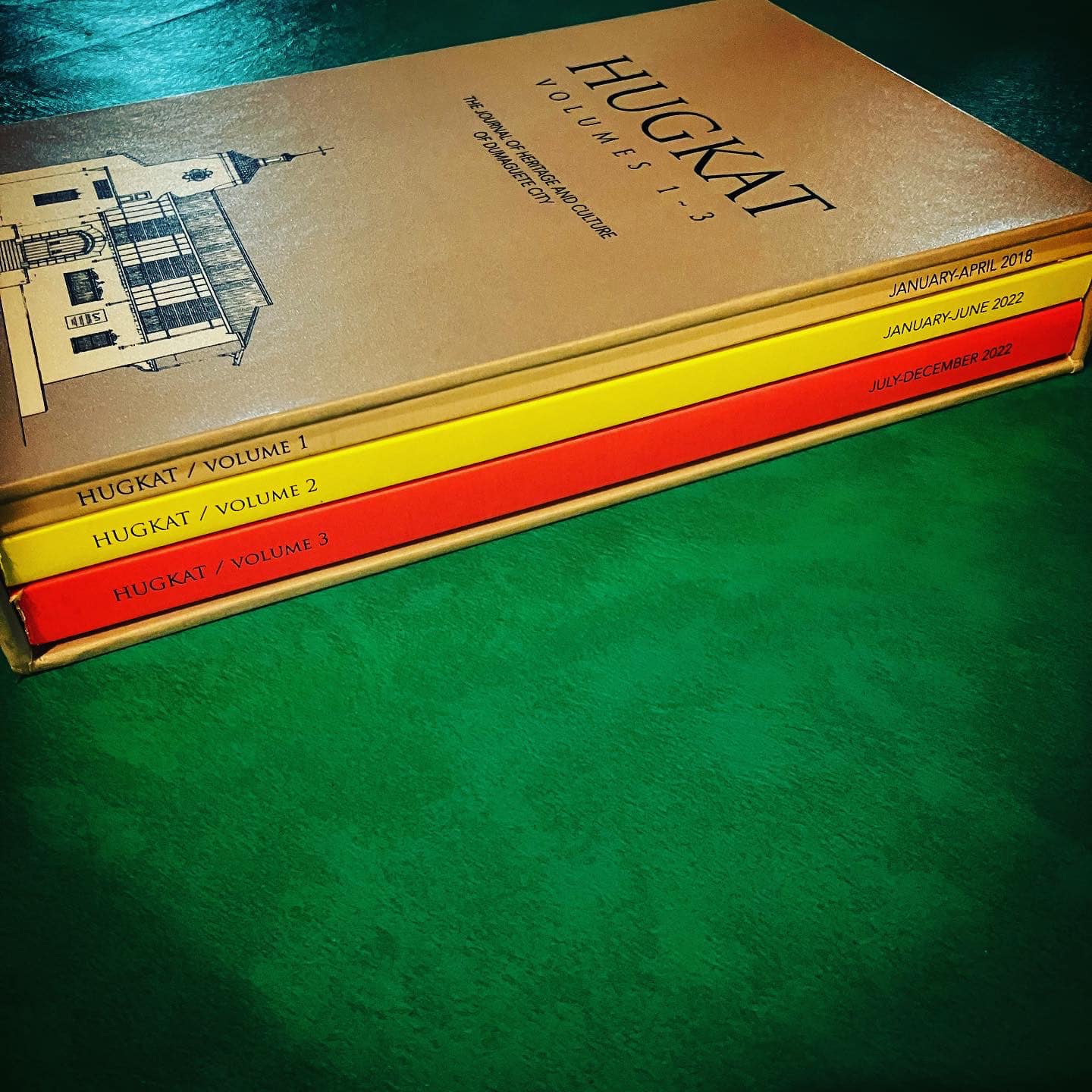 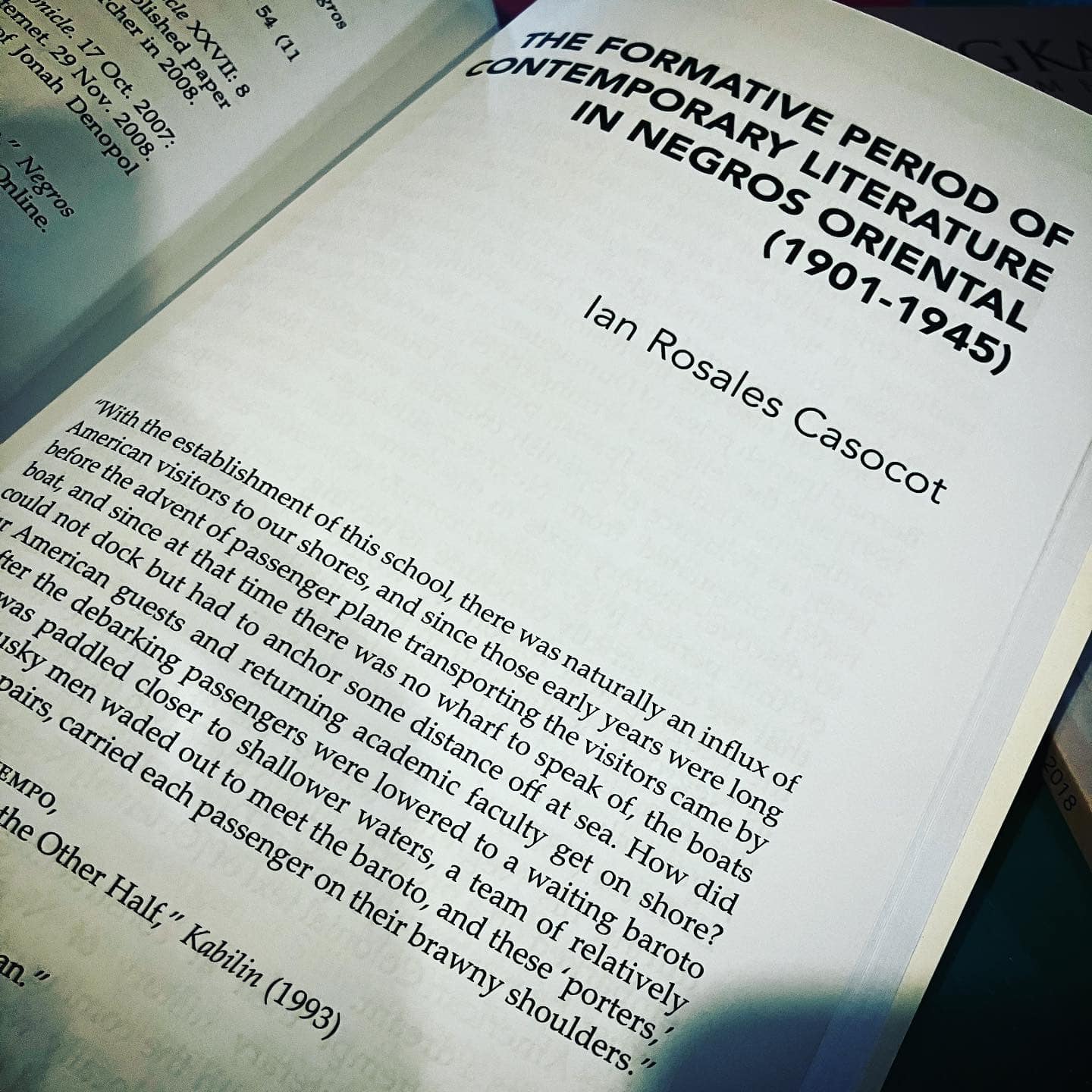 From Volume 1, we have “Padre Mariano Bernad in Dumaguete: Its History in Retrospect, 1620-1895” by Fr. Roman C. Sagun Jr. This is a compelling narrative and annotation on the work of local history by the last Spanish colonial parish priest of Dumaguete, Fr. Mariano Bernad, who was beloved by locals, and who served Dumaguete for many, many years.

We also have “Early Protestant Endeavors in Negros Oriental: The Malahay Brothers and Angel Sotto” by Prof. Carlos M. Magtolis Jr. This is a great history of the pioneers of Protestant evangelization in the province, a story we rarely hear about.

We also have “Dumaguete During World War II” by the late Prof. Caridad Aldecoa-Rodriguez. Here, the eminent local historian provides the stories and the statistics of the war that ravaged Dumaguete and the world—three years without God, so they say.

We also have a matrix titled “List of Presidentes, Municipal and City Mayors of Dumaguete (1901~2001)” by Dr. Earl Jude Paul L. Cleope, which gives us a handy overview of city development under specific administrations.

And finally, we have “The Political Career of Mayor Jose Pro Teves, 1948-1978” by the late Prof. Victor Emmanuel H. Enario, one of the pioneering works of political biographies that we have here in the city. Did you know, for example, the Jo Pro Teves was the one who popularized breakfast of puto maya and tsokolate at the painitan? Just to be clear: he did not invent it, he popularized it. He was seen in it very regularly that locals came to patronize the painitan as a breakfast hub, leading to its intangible heritage status as being uniquely Dumaguetnon.

In Volume 2, “Dumaguete in Historical Perspective” by Dr. T. Valentino S. Sitoy Jr. This is a comprehensive but short history of Dumaguete from the pre-colonial period to the contemporary period. This is the essay that famously debunks the notion that the name of Dumaguete does not come from our oft-told story of “daguit,” the kidnappings of locals by southern marauders.

We also have “The Political Career of Mariano F.B. Perdices: Post-War Years (1945-1959)” by Dr. Justin Jose A. Bulado. Another fantastic local effort in political biography.

We also have “Fire and the Changing Cityscape of Dumaguete” by Dr. Earl Jude Paul L. Cleope, who lists down all the significant fires in Dumaguete starting in the 1950s, and how fire as a phenomenon has actually helped change the city’s landscape, often for the better.

And finally for this volume, we have “The Formative Period of Contemporary Literature in Negros Oriental (1901-1945),” by yours truly, where I map out the development of local literary arts in the first half of the 20th century, a period of great tumult and trying that led to a firmer literary groundswell later on.

Volume 3 is most interesting. It publishes for the first time the Historical Data Papers mandated by President Elpidio Quirino in 1951. The purpose of his order was to update the historical data papers deposited at the National Library, which were destroyed during World War II. The result, archived in 1953, are collections of compilations of historical data regarding barrios, towns, cities, and provinces in the Philippines. It contains fascinating documentations that include the customs and traditions of each locality, even literary outputs!

But we could not publish all of the documents relating to Negros Oriental, because it would require at least five more volumes.

A note on Volume 3. We presented the texts from the Historical Data Papers on Negros Oriental and the Sub-Province of Siquijor largely unedited, to preserve as much as possible the flavor and texture of the original materials. This means that we have not touched, for example, most of the peculiarities in grammar, punctuation, and syntax that the original writers of the texts wrote them in. The only editorial changes we made were done for format uniformity. In one instance, we made the choice to move some texts around to ensure a better flow of the material. This particularly concerns “The History of the Sub-Province of Siquijor,” which, in the original, is found at the end of its particular compilation. We moved it to its present location in this volume, before the sections on the various Siquijodnon towns. The original compilation obtained from the archives of the National Library of the Philippines consisted of several sets of materials that include the following: [1] The History of Negros Oriental, [2] Municipal Cultural History of Negros Oriental, and various histories of Oriental Negrense municipalities and the capital city, including [3] Dumaguete, [4] Amlan, [5] Ayungon, [6] Bacong, [7] Bais, [8] Bayawan, [9] Canlaon, [10] Dauin, [11] Guihulngan, [12] Jimalalud, [13] La Libertad, [14] Manjuyod, [15] Pamplona, [16] Payabon, which is now Bindoy, [17] Santa Catalina, [18] Siaton, [19] Sibulan, [20] Tanjay, [21] Tayasan, [22] Valencia, [23] Vallehermoso, and [24] Zamboanguita. It also includes materials on [25] Siquijor, as well as its towns: [26] Enrique Villanueva, [27] Larena, [28] Lazi, [29] Maria, and [30] San Juan. Each set runs to the hundreds in terms of pages, thus, for the purposes of the current publication and its limitations, only the first three sets have been reprinted in Hugkat Volume 3. It is hoped that future issues of Hugkat Journal will be able to accommodate the compilations not included in this particular issue.

I think of the Wednesday launch of this collective effort with gratefulness. Grateful to Jacqueline Veloso Antonio for making culture and heritage very much a huge part of her tenure as Dumaguete City Tourism Officer. Grateful to Earl Jude Cleope for pointing me to the materials and providing most of them, and for the patient guidance. Grateful to Mayor Ipe Remollo for not hesitating to fund anything connected to local history and heritage. Grateful to the whole Dumaguete City Tourism Office for making sure the whole launch went well. Grateful to the contributors for allowing us to share their historiographic works, some of whom came to celebrate with us, like Carlos Magtolis Jr., Justin Jose Austria Bulado, Fr. Roman Sagun, and T. Valentino S Sitoy Jr. I’m also grateful to Elizabeth Susan Vista-Suarez and Angelo Sayson for providing the cultural intermissions. Grateful to Glynda T. Descuatan for being the best emcee, and for being the best interpreter of scripts I write for events like these. I’m grateful to all the family, friends, and acquaintances who came to support the launch of this journal project, such as Silliman University President Betty Cernol-McCann, Golda Benjamin, Gideon J. Caballes, Angeline Dy, Angelo A. Villanueva, Evgeniya Spiridonova, Karen Villanueva, Bernice Anne Elmaco, Sharon Rose Dadang Rafols, and so many others. [I just wanted to see friends before the year ended, to be honest.] I’m grateful to all the school librarians who came to secure their copies! And grateful to Renz Torres for keeping me sane throughout the work process, and for ably leading the tour of the National Museum after the event.

I do hope that this journal project continues because there are so much more to cover in local historiography. 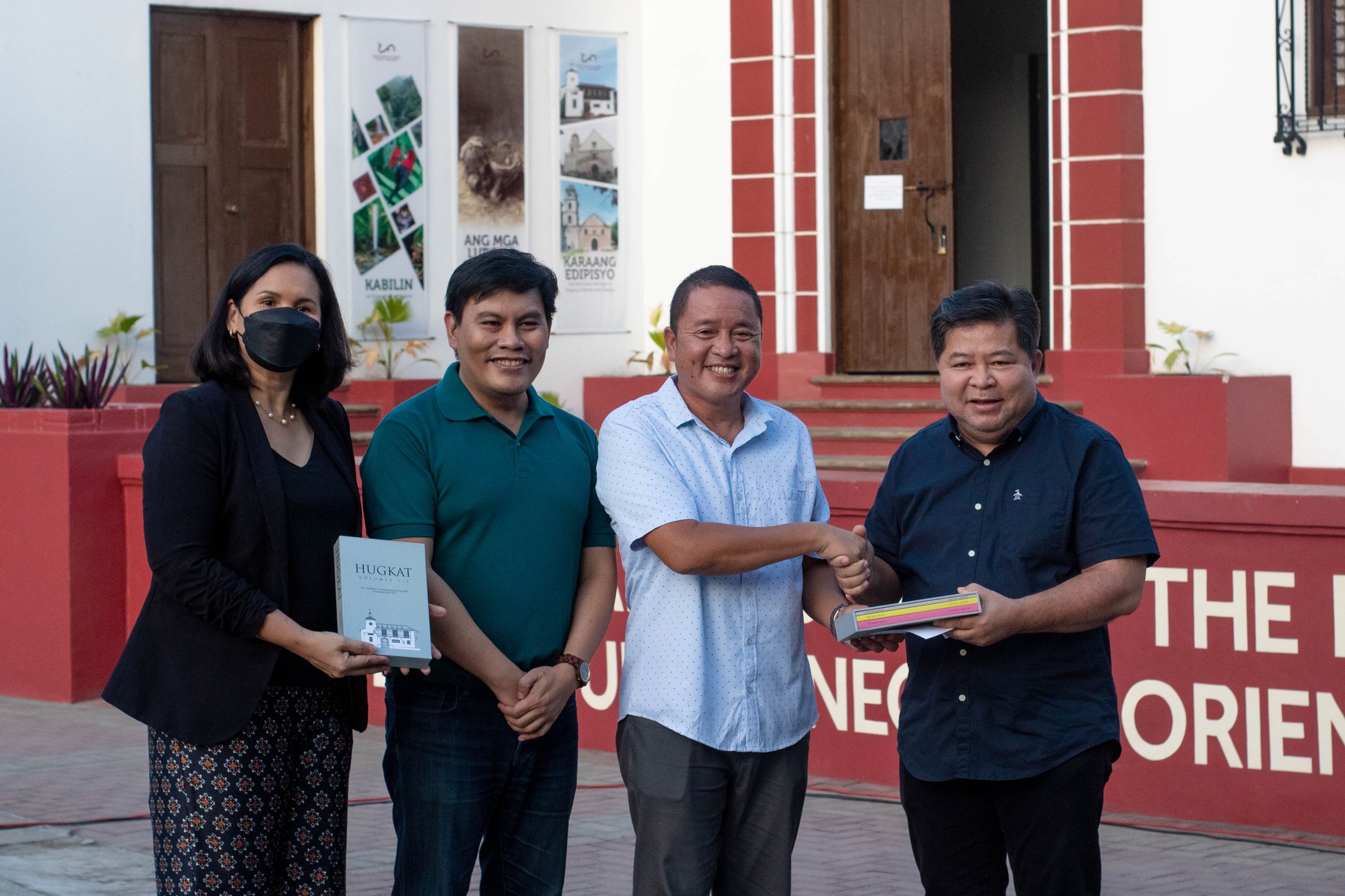 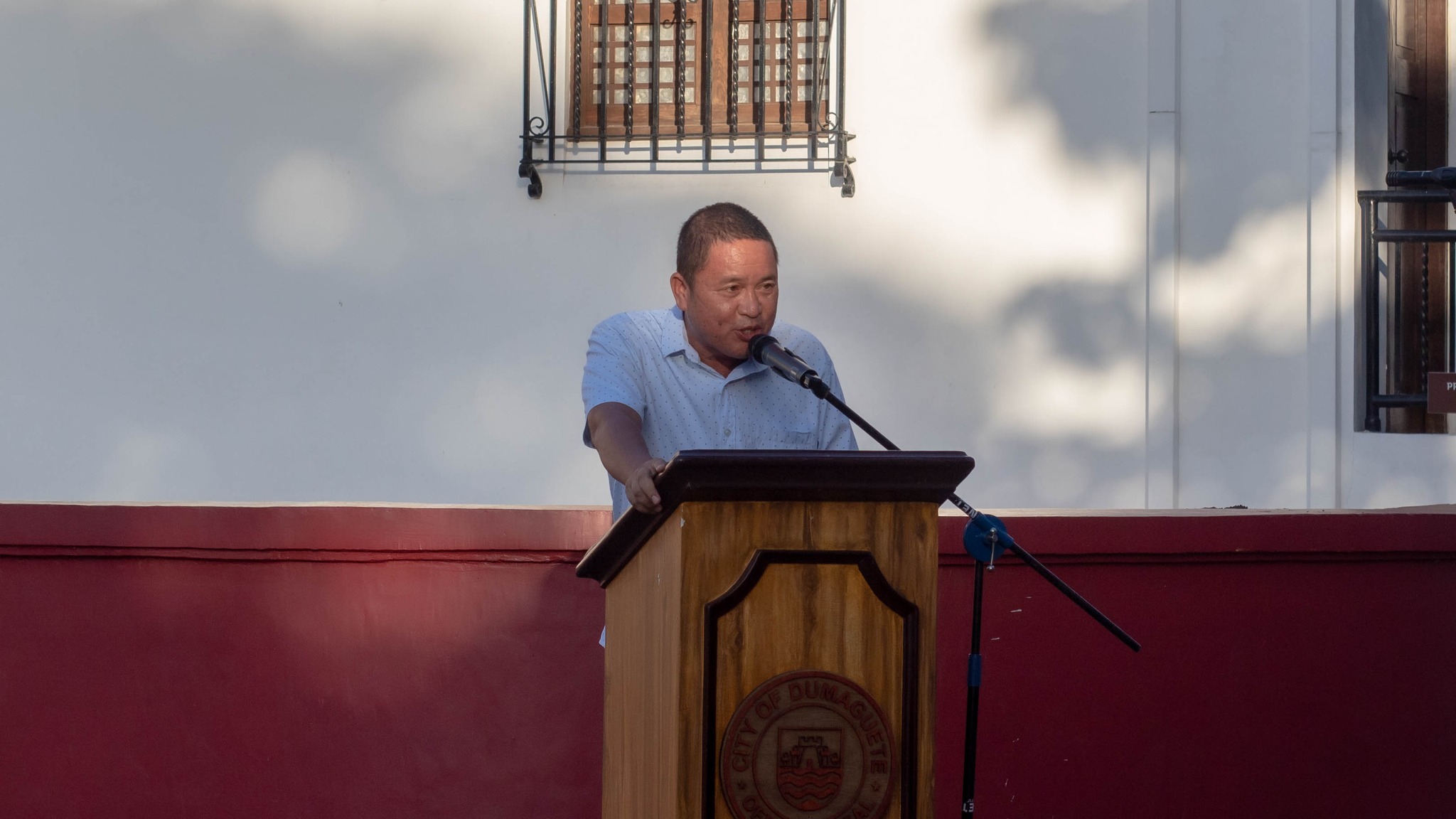 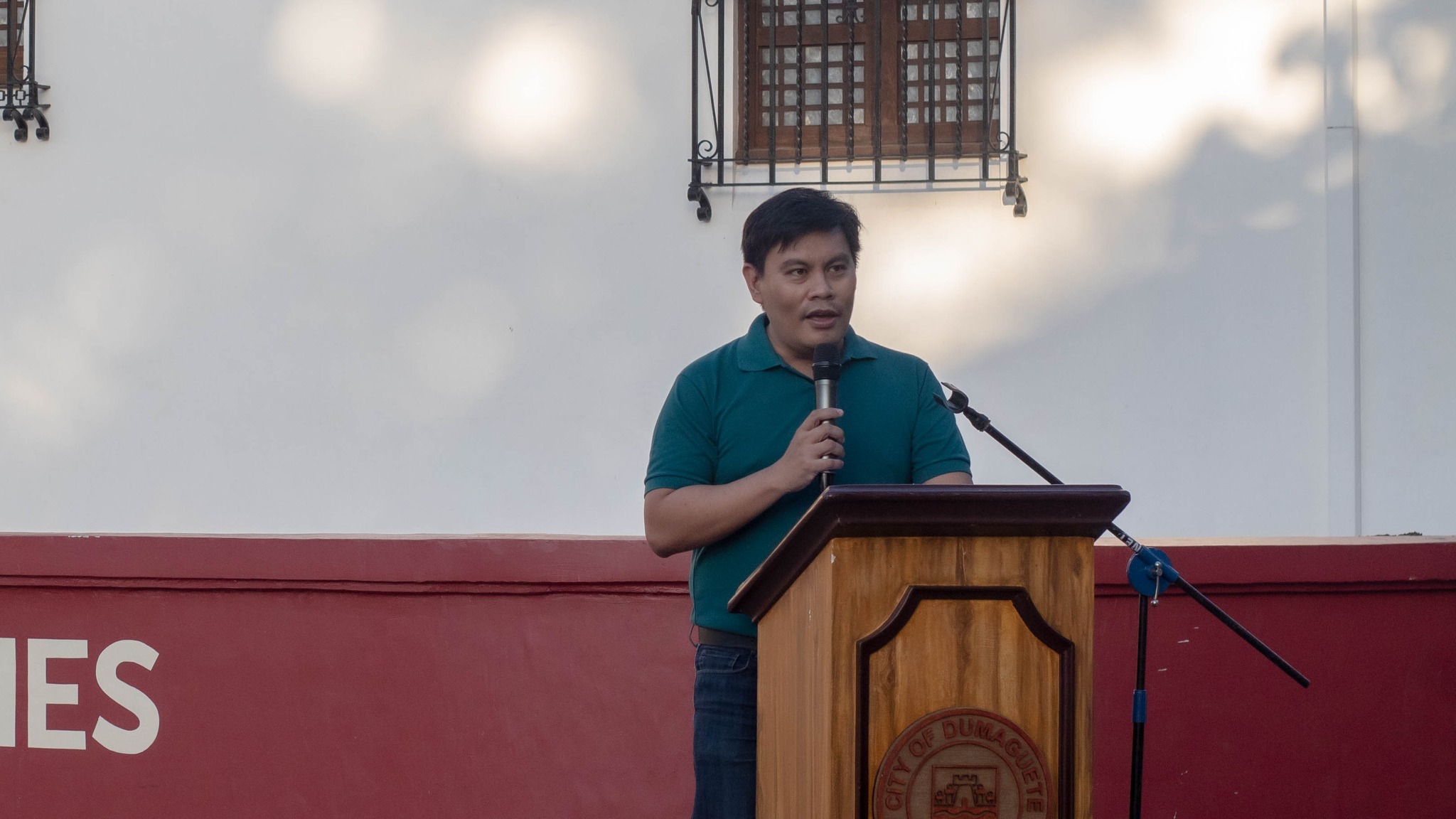 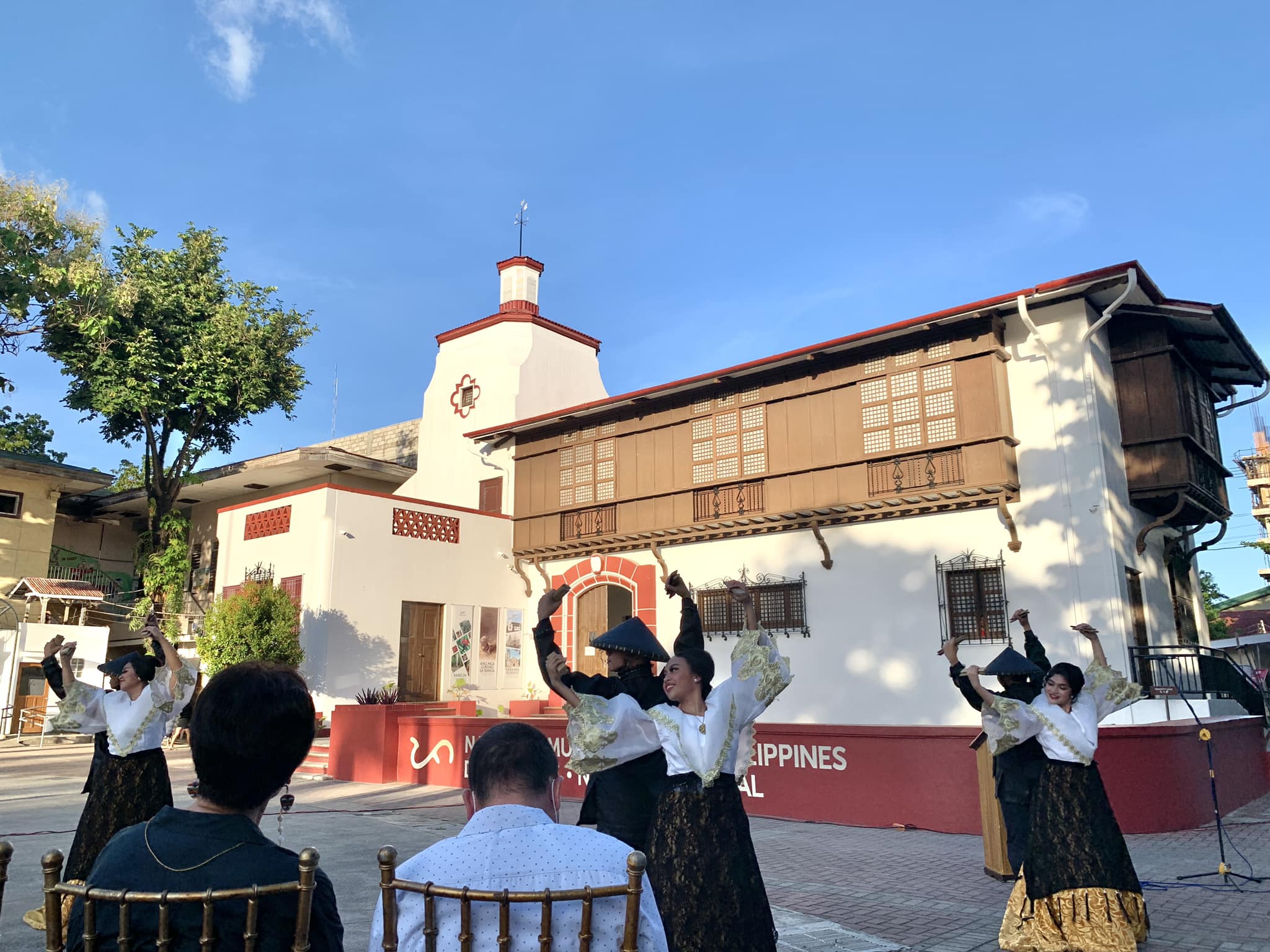 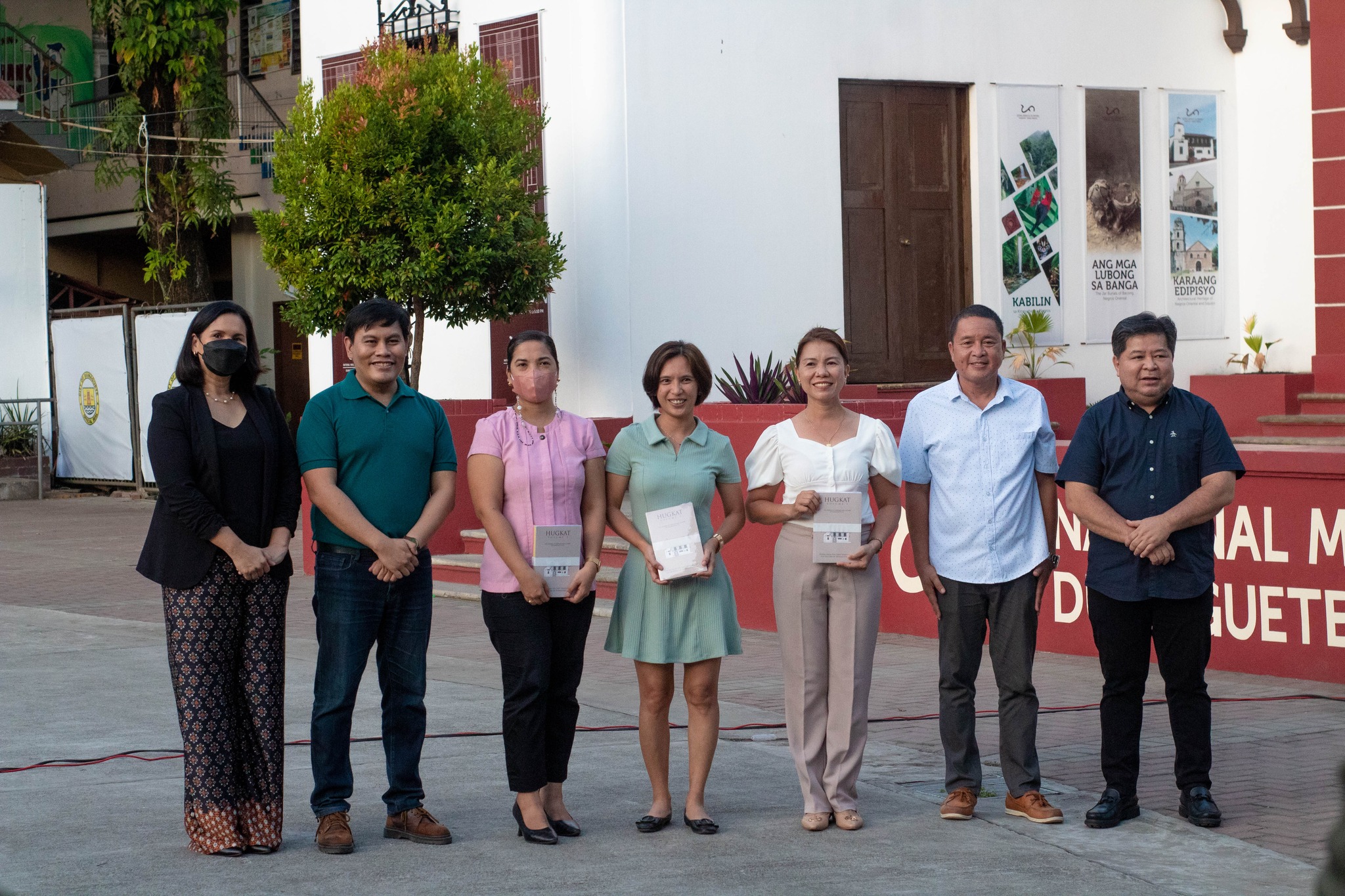 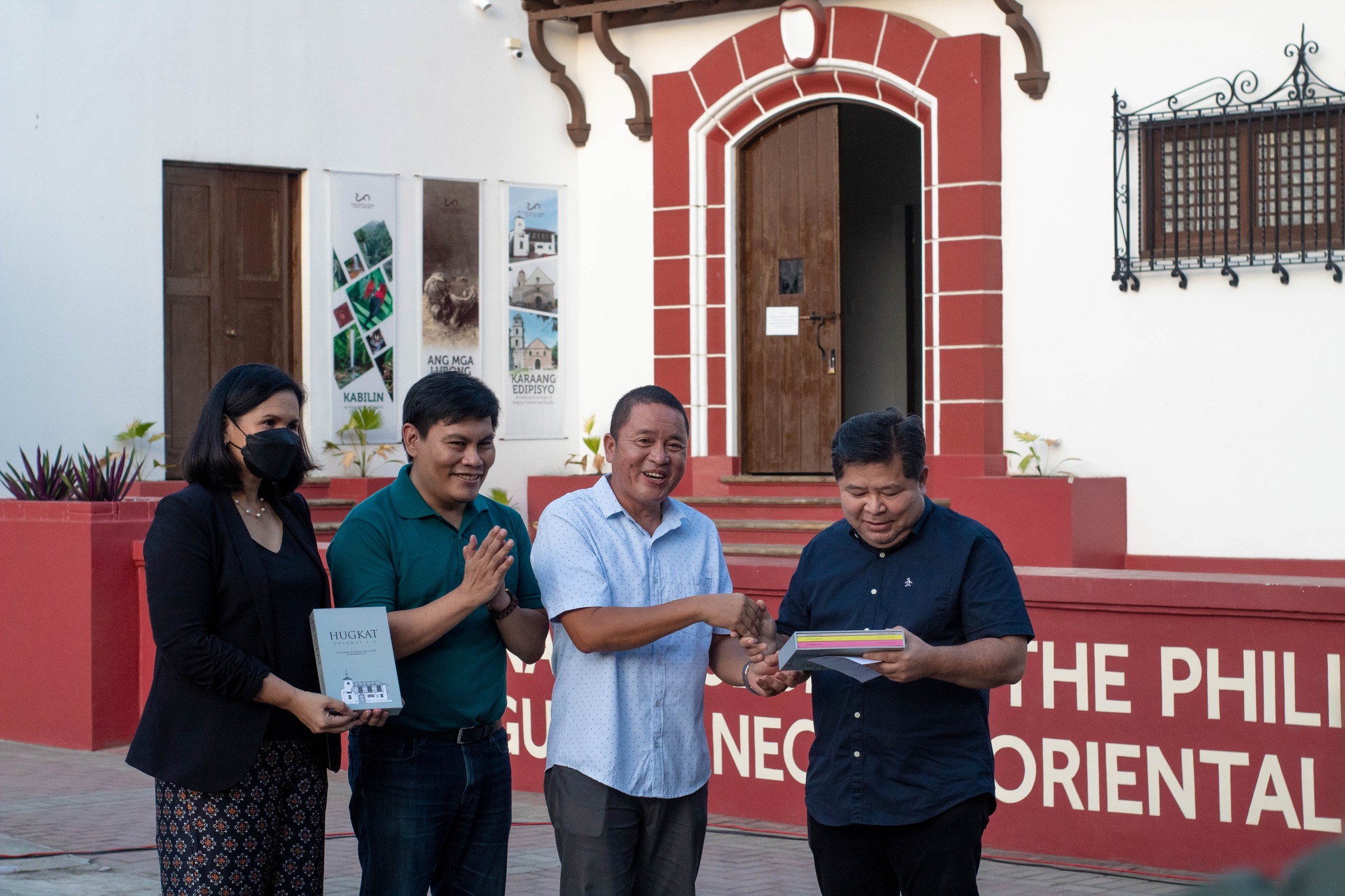 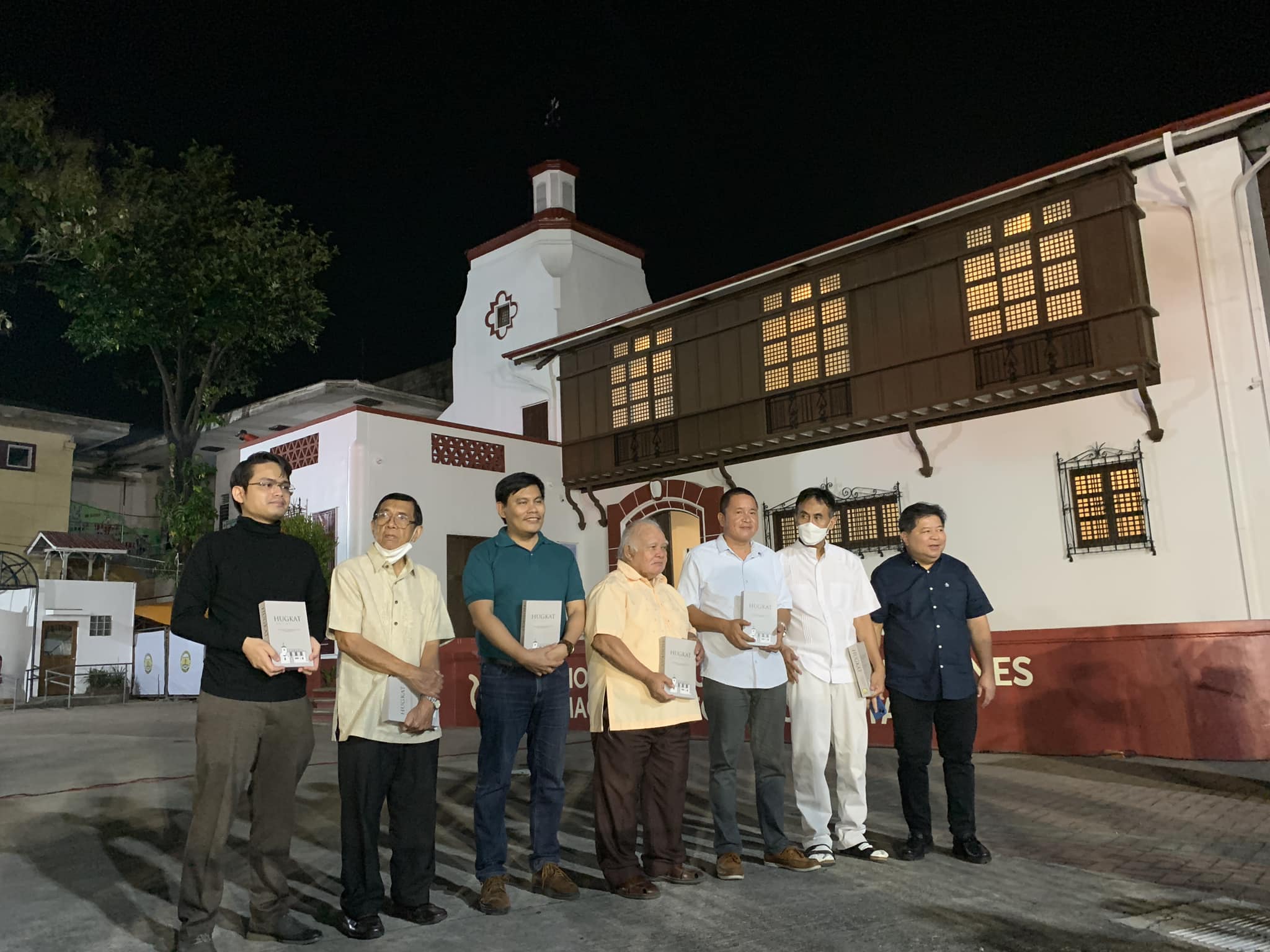 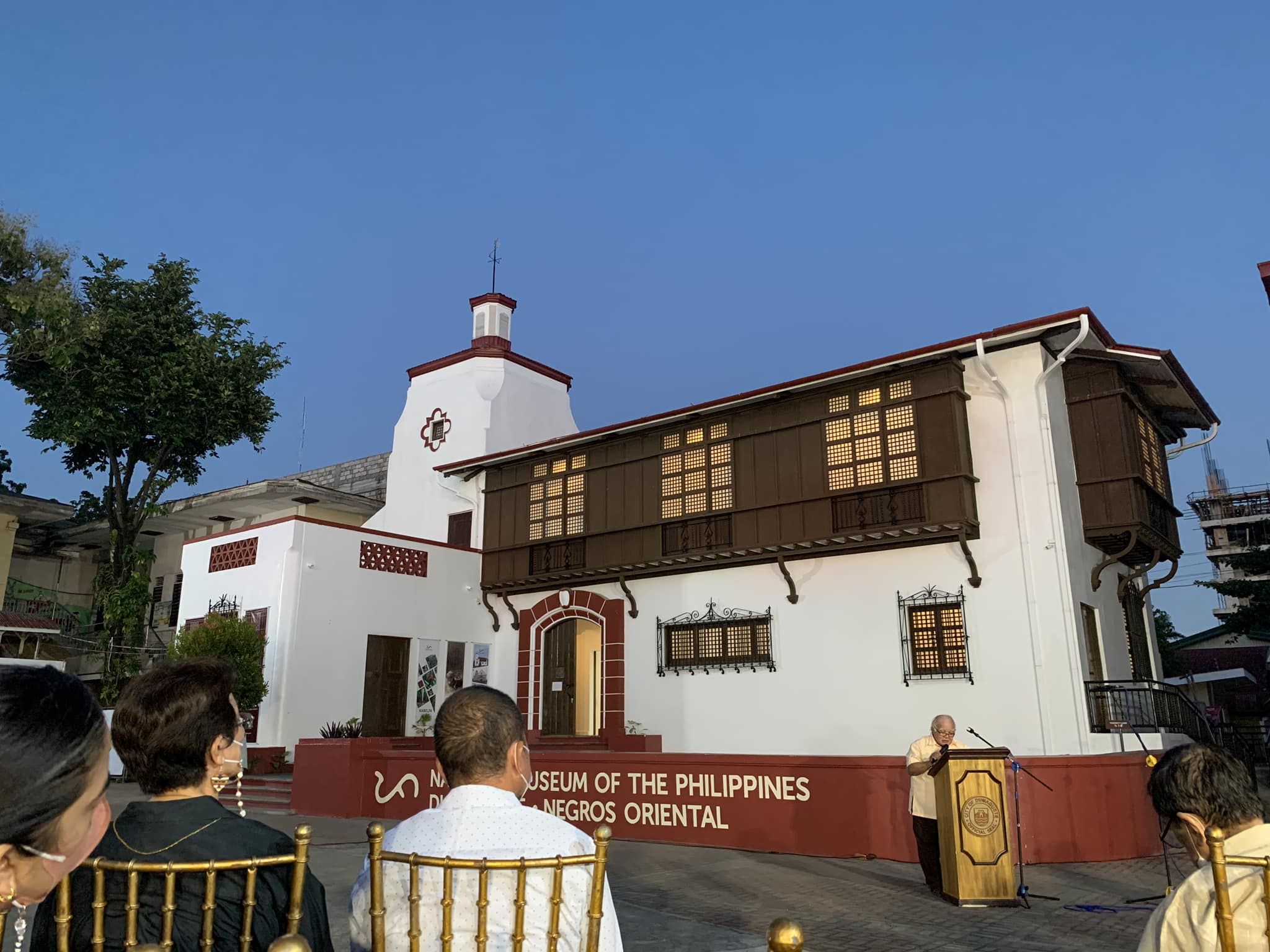 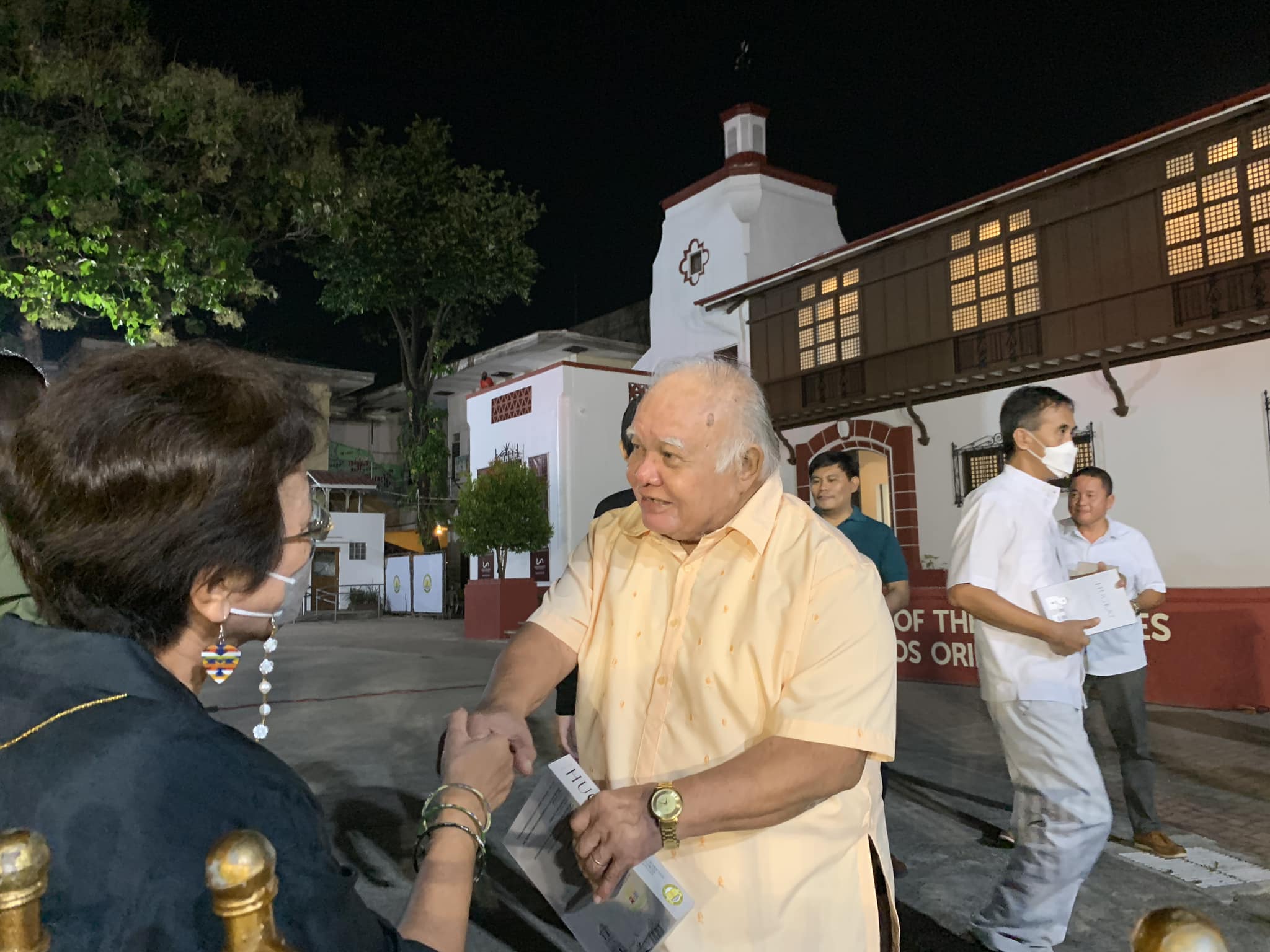 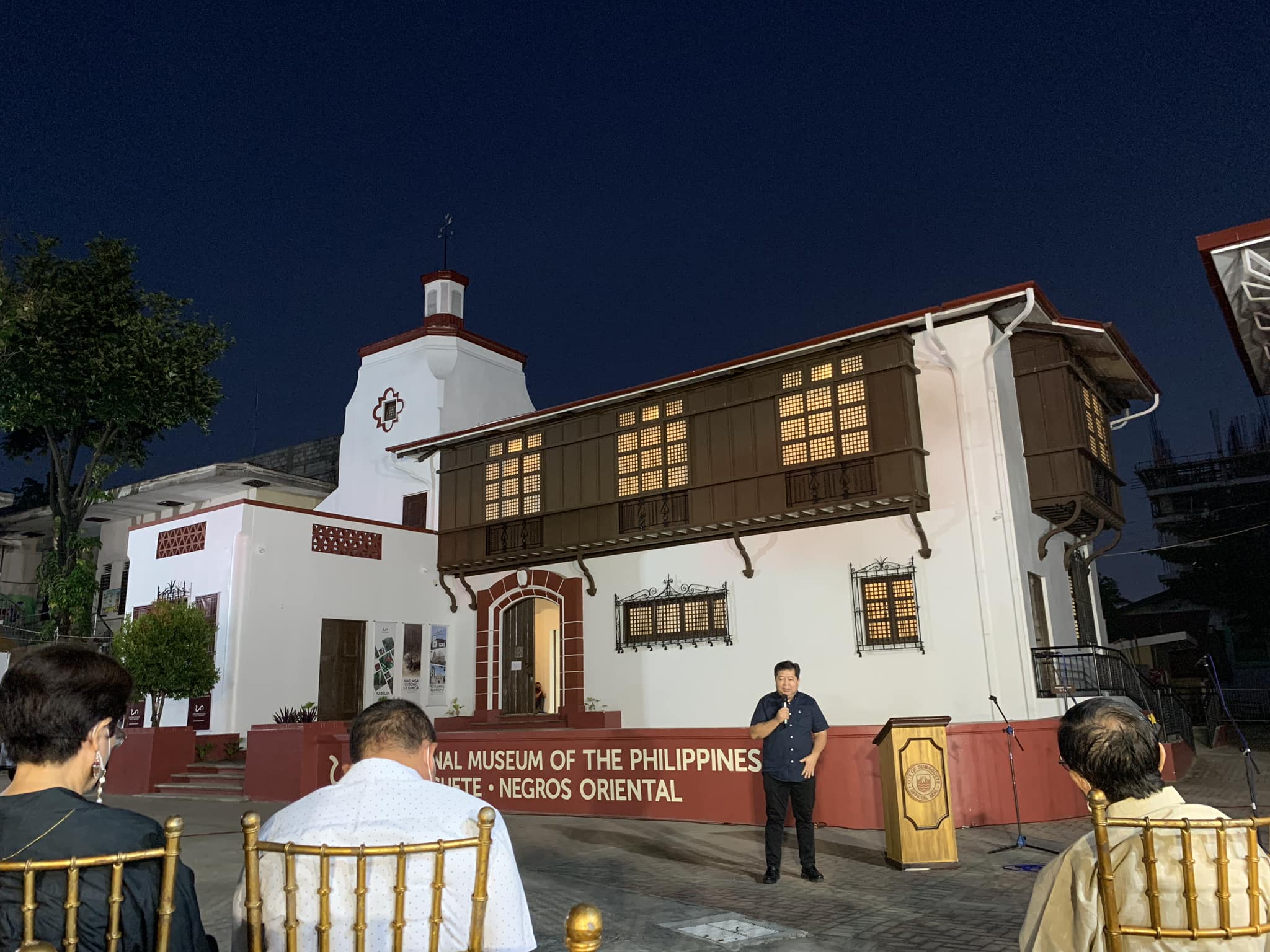