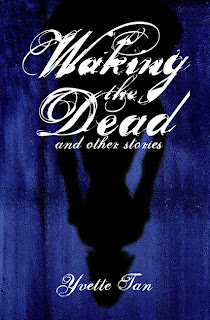 From the Philippine Daily Inquirer:

Eyes wide with wonder and flushed with fear, the individuals at the dark heart of Yvette Tan’s stories are unsuspecting people suddenly touched by an inexplicable yet irresistible phenomenon – just like the readers who gingerly approach Tan’s first collection, Waking the Dead and Other Horror Stories.

That is because Tan has laced her 10 precision-machined stories with elements of horror which are neither contrived nor telegraphed. She takes the mundane and turns it into something menacing.

The first story, “The Child Abandoned,” exemplifies Tan’s approach. Set in Quiapo, the tale centers on the unusual child Teresa, who seems to have an eerie connection with the despoiled Pasig River and the profound change the Pasig undergoes. While it was not obvious at first, the events in this story are the lynchpin of the collection, essentially making the others possible.

“The Bridge” takes that conceit even further, taking a political figure called Madame and the bridge she built at San Juanico into decidedly darker territory: “The presence rode the air, slithered past me, whispered in my ear. It was all I could do, not to bat it away, to run screaming from the room. I could feel my heart beating fast in my chest. I have always been comfortable with my abilities, never been afraid of the beings I could see and hear and feel, until now. I knew what an enkantada was, and a duwende and a kapre. I did not know what was in the room with me.”

Here, Tan introduces us to an entirely new thing to be afraid of.

The other stories trade in the usual-turned-unusual, with familiarity becoming the discarded spirit gum of the city’s disguise. A meticulous set-up leads to the ambiguous ending of “Fade to Nothing.” “Delivering the Goods” is modern sardonic morbidity.

Set in Virra Mall of the future, “Boss, Ex?” takes the ubiquitous Metro experience of buying pirated movies and messes with it.

“Kulog,” seemingly the most lighthearted of the stories, reads like a children’s story about a neighborhood kapre but grows surprisingly poignant.

The titular story “Waking the Dead” is old-fashioned in the sense that its premise is classic, but Tan transposes the zombie mythos to somewhere much nearer to us. Tan does a lot with just two pages.

The ante is raised with “Stella for Star,” a gripping meditation on what happens when the infant left at your door has a taste for blood. By far Tan’s most personal story, “Daddy” involves a writer named Yvette Tan who receives fragmented calls on her cell from her dead father.

The final story, “Sidhi,” is the most ambitious, combining drugs, fiesta and the supernatural into a feverish conclusion that stuns with the realization it unchains. By the time you realize what is actually happening, you also realize that Tan had you – and she had you all along.

Tan’s narrators and protagonists are mostly young yet transcendent, and perhaps the most fascinating thing about “Waking” is how all of Tan’s stories seem to occur in the same parallel Philippines: “Making one’s way through a Quiapo crowd is never easy, especially today. At one point, I found myself in the arms of a tikbalang. Legend has it that before the saint gave life back to the river, the city belonged only to humans. Sta. Teresa’s miracle had opened the doors for the folk of the Other Country… until Quiapo became a melting pot for different species.”

Tan’s stories rise like the enchanted river to meet their readers, the words like brackish water suddenly turning clear. Something is awakened in this book, an irresistible trap of terror and talent from Yvette Tan, whose seductively scary stories will make readers glad they acquiesced when offered this fateful bargain: “Drink, and your eyes will be opened.”


Anvil Publishing will launch Waking the Dead and Other Stories by Yvette Tan at 4 p.m. on 15 August 2009 at PowerBooks, SM Megamall.