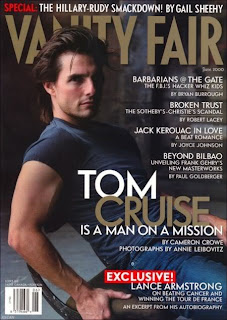 I leafed through it at first with the detachment of somebody just biding his time. It was there, and my meal was still cooking. I was waiting, and this issue of Vanity Fair was on the magazine stand. It had Tom Cruise on the cover, his hair long, his pose relaxed but studiedly masculine, as if to say, "I am the biggest star of them all, and here you are, picking up this magazine because of me." I did not. I've always liked Vanity Fair, and if it were Adrien Brody on the cover, I'd still pick it up. I glanced at the date. June 2000. I whistled, smiled a bit. How long ago this was. Ten years? A lot of things can happen in ten years. Heck, a lot of things can happen in a year -- and I began to look closely at that. This magazine was a time machine, you can say. Or a snapshot of a moment in popular culture, a little more than a year before things really changed and transformed us all. This issue came out fifteen months before those planes swooped down and flattened the towers -- and changed the world forever. What was I doing in June 2000? Probably starting to get into Graduate School, inching my way into a career in teaching, even as I plotted my way out of my first job as editor of this local newspaper. The plans for the Silliman University centennial celebrations were underway, and Dumaguete was still a quiet town. I looked inside. The pictures inside the pages looked quaint, brushed by some form of innocence in all its brashness and celebration of the commercial and the small. The people in it looked too happy, or too deliriously drugged out. Oblivious. There is an ad with the Sex and the City girls coming off its first season -- all of them still looking buxom and young -- daring us: "Are you ready for more?" In the Hollywood pages, the Vanity Fair post-Oscar party was riddled with pictures of faces that were celebrated as new -- but are now considered vintage, long-gone couplings -- Salma and Edward, Tom and Nicole. (Kidman, apparently, was in Australia filming Moulin Rouge.) Clasping her Oscar, Angeline Jolie is dressed as Morticia Adams, with no hint of the luster that would soon make her the Most Beautiful Woman in the World. The ads for luxury goods come and go, lackluster in appeal, but one ad struck me: Lucky Strikes, and its tag line: "It's Toasted." (Years later, Mad Men would recreate the coining of that line.) The waitress brought me my food, and I began eating, and I turned the pages some more. In one piece, Lance Armstrong chronicles his battle with cancer, and in another, Hillary Clinton takes on Rudy Guiliani. Cameron Crowe interviews Cruise for the issue, and begins with an anecdote about Cruise reading out loud over the phone the lines of Lester Bangs from a movie Crowe is set to direct -- something still called Untitled. (Almost Famous was still a dream.) In the interview, Cruise reflects on the strange reception towards Stanley Kubrick's last film, Eyes Wide Shut. (Kubrick just recently died, his last film a misunderstood masterpiece.) In another story, Helen Gurley Brown gushes about her new book I'm Wild Again, and answers questions about plastic surgery on enhancing the labia. "Does it give girls better orgasm?" she asks. On one editorial fashion spread, Jennifer Lopez, glammed up in a series of scenes, still looks like she is still unscrubbed Jenny from the block -- with none of the incandescence of her American Idol future. (In 2000, there was no American Idol.) So many things. Ten years ago. I finished my food, closed the magazine, and went home.