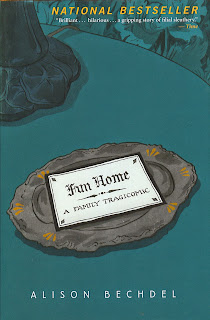 Two weeks ago, in one of my current depression's pendulum swing towards the dark side, I found myself dealing with the ongoing search for recuperation (and some urgent things-to-do) in the relative comfort of the old family home somewhere in Bantayan, away from my own apartment in Tubod, which I had abandoned for a week or so, all unplanned. Self-eviction seemed the wisest choice at the time. I spent a night at a hotel, and then found myself drifting back to live with my mother, who couldn't be happier: she had not seen me in two months, and she was complaining. Well, I thought, here's me: you'll have all of me for a few days. Just spending all those hours and days away from the rest of the world, alone in my old perfectly air-conditioned bedroom -- with no cellphone, with no social media, with no wifi -- seemed necessary, I thought then, if I were to stay any saner. Days like that, one turns to books and to movies to occupy one's mind, after it has run the full gamut of introspection and has had enough of self-psychoanalysis. I found myself reading Alison Bechdel's seminal Fun Home.

I've met Ms. Bechdel during a talk she gave in Iowa City a few years ago. While I have always loved her art, I surprised myself for not having read any of her books. And Fun Home is her acclaimed sophomore graphic novel effort which detailed her coming out as a lesbian -- which, she found out, was somehow intricately linked to her growing up in a funeral home (the "fun home" of the title, which is also deliciously ambiguous in symbolism, given how the story unspools) in a Midwestern town that bordered a forest. Growing up in that home meant living under the tortured although gilded lie of a life her own father lived. He was an exacting, not exactly warm figure, who challenged young Alison's intellect -- and who was curiously fastidious about cultivating a lifestyle that made their house look like a page from an interior design magazine -- all antique, all intricate. And thus she begins to tell her father's story, which finally would involve an admission from her own mother that she had been living with a closeted gay man all those years -- a broken man whose death by being run over by a truck might not truly be "accidental."

I love Ms. Bechdel's intricately told tale that combines stories of small town life with stories about the love for books, while going over such issues as homosexuality, suicide, and pedophilia. And for some reason, without meaning to at all (there was no design!), I found myself watching Andrew Jarecki's powerful documentary Capturing the Friedmans (2003) right after.

Here was another tale of a broken American family, although one that goes even darker than Ms. Bechdel's own confessions. Compared to what happens to the Friedman family, Ms. Bechdel's story would seem so vanilla. Consider Jarecki's account. On the surface, the Friedmans seemed to be a perfect upper-middle-class Jewish family living in posh Long Island. The father, Arnold, is a respected teacher in the community who is known to give private computer lessons at home with his son Jesse. There are two other sons, and the mother is the typical American housewife -- if somewhat excluded from the bond her husband makes with her sons. And then their lives are turned upside down when a chance arrest of Mr. Friedman over the possession of child pornography leads to a bigger charge: that he and his son Jesse has been molesting generations of young boys in their computer classes in the basement.

The documentary is a gimlet-eyed consideration of the madness that ensued and that soon engulfed their town. Jarecki takes to task, without somehow blatantly editorialising, the unbelievable clumsiness of police procedures, the unfairness of the trial that followed, and the crucifixion by the media that further stirred things to a tempest that proved irrevocably destructive. In the face of all these, we get a family bent on videotaping everything -- filming their lives seemed to be their grand project -- and so we have a film that is somehow "enriched" with factual footage, including that of relationships blowing apart as the family witnesses the inevitability of it being torn to pieces.

All families have secrets. Not all fathers are saints.

I thought about my own family, and quietly acknowledge the skeletons in our closets we have not even begun to excavate.