When Jacqueline Veloso Antonio took the challenge of becoming tourism officer of Dumaguete City in 2016, one of the initial projects she had in mind for her tenure seemed simple enough to carry out: make sure to update the city’s street signs and install them in places where they were missing.

It felt very much a part of any good tourism mandate. After all, how can one give a proper geographic guide to tourists in Dumaguete when street names are not readily available as convenient signposts to their exploration of the place?

Worse yet, the unavailability of proper street signs have created a native population that’s also largely ignorant of their own geography, sometimes compelling them to create convenient but “unofficial” names to act as landmarks when they traverse the city.

No one knows that the “Rizal Boulevard” is really called Rizal Avenue.

No one knows that from the Welcome Area of the pier going northwards Rizal Avenue continues on as Flores Avenue, which ends at the corner of Lantaw. It continues northwards to Bantayan as Escaño Drive [a new road], punctuating at the Silliman Beach. When the road turns west, running alongside Silliman Farm, it becomes Henry Mack Drive. Meanwhile, the name of the beach from Lo-oc to the border in Bantayan is Piapi Beach, not “Escaño Beach.”

Sometimes, locals are so used to hearing the sounds of street names and not reading them as bona fide signs that they are surprised to know that it is “Luke Wright Street” and not “Look Right Street.”

Sometimes there are streets we didn’t know have names. Jovenal V. Somoza Street is the road passing the ROTC Office at the Silliman Ballfield. Continuing that is a road locals call “Mango Avenue,” ending at Rovira—although officially it is Route 7. [A new name is in order!] And in the enclaves of Daro surrounding its market, we have small streets like Ipil Street, Tindalo Street, Molave Street, and others. The road cutting across Claytown Subdivision connecting Veterans Avenue to Gen. Diego de la Viña Street, where Gabby’s B&B is, has no name. Google Maps say it is Filomeno Cimafranca Drive—but I’m not sure it’s official.

The main thoroughfare of Amigo Subdivision has no name. Why don’t we just officially call it Mary Davis Amigo Drive, after the subdivision’s founder, an important pioneering businesswoman? And why are we sticking to just politicians for naming streets when we have two National Artists and two National Scientists? Let’s go for Edith Tiempo Street, Eddie Romero Street, Angel Alcala Street, and Clara Lim-Sylianco Street!

There are street names that are holdouts from the past that persist to this day, still being used by people in their commutes and by businesses in their addresses. People still say “Colon Street” when what they mean is Senator Lorenzo G. Teves Street. “Legaspi Street” is really Bishop Epifanio Surban Street. And “Cervantes Street” is really Mayor Joe Pro Teves Street. 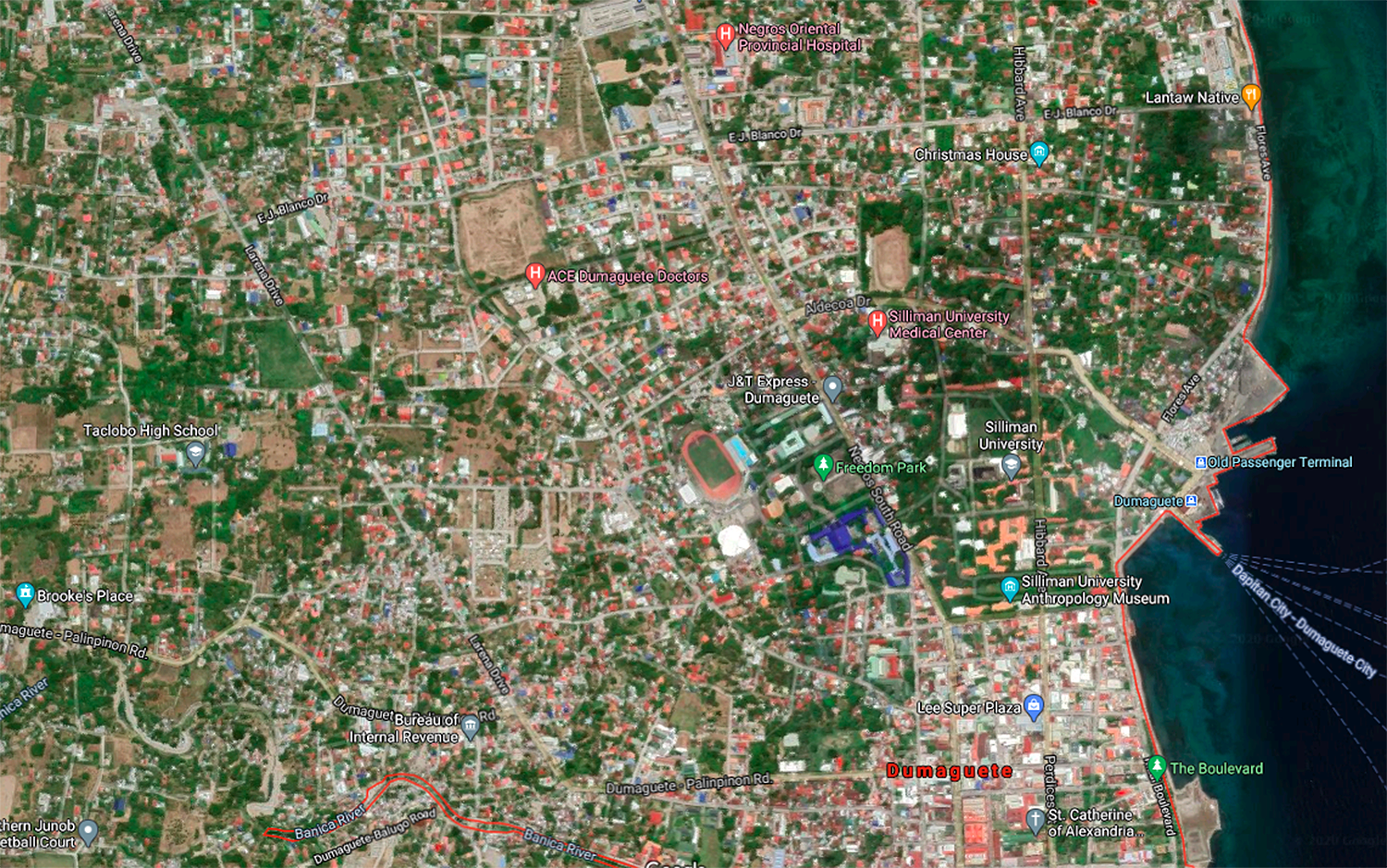 And because of the length of the National Highway, the nebulousness in the naming not withstanding, locals have taken to calling specific places within its range some special names—even if the inspiration for those names may no longer exist. There was “Sharlyn’s,” once upon a time, named after a sari-sari store that sold ice cream in front of Freedom Park—although no one uses this anymore. Still persisting is “Orchids” just a stone’s throw away. Also “Bricks,” and nearby, the “Karate Club.” These are handy destination qualifiers all tricycle drivers know. Flag down a tricycle, and if you say, “Corner of Veterans Avenue and Aldecoa Drive,” you’ll get a driver scratching his head. Say, “Bricks,” and you’re off to go.

There are also conundrums.

What to make of the two Katada Streets in Dumaguete? One is the short length that begins at the Welcome Area and ends in Hibbard Avenue, Opena’s and The Rollin’ Pin along the stretch. The other is the narrow one that goes right along the painitan at the tianggue.

And there is the mystery of San Jose Street. The “extension” of it westwards is so long and unwieldy it serves no geographic specificity—and thus is no help to anyone. There really should be a city resolution drafted to give specific lengths of its byways their own names. At least the curve that extends to Daro, going to the Water District, has been renamed Gen. Diego de la Viña Street—although locals still call it “Kalubihan.”

I’m glad we’ve retained some of the old street names, especially those streets that follow the Spanish tradition of naming the early streets of Dumaguete after saints. From Lorna Makil, we learn that this concept of “encircle and protect” allows for the spiritual protection of the poblacion, with streets surrounding it becoming hallowed by these saints’ names. Hence, we have Calle Santa Catalina, Calle San Juan, Calle San Jose, Calle Santa Rosa, and Calle Santa Cecilia—although the latter is now Silliman Avenue.

It took three years, in December 2018, for the City Tourism Officer to finally see some realization of her “proper street signs” dream. What “proper street signs” we see now in place is just Phase 1 of the project—perhaps owing to the fact that there really was no budget for it in the first instance of its conception back in 2016, and for which reallocations of funds had to be done. Phase 1 is all about taking care of the inner city streets. “Phase 2 is all about the outer city streets,” Ms. Antonio said, “and that’s in the works. We were supposed to do Phase 2 in January 2020, but COVID-19 happened. It was put on hold. We continue this year.”

And how come the street signs for Rizal are still missing?

“I had them removed for replacement,” she said. “The manufacturer put in ‘Rizal Boulevard,’ when it should be ‘Rizal Avenue.’”

Such distinctions are important, whether one likes the idea or not. A city progresses for the better if it knows itself—and that includes geography, and street names more specifically. If we cannot agree on the name of the street we live on, how can we agree on the best way to move forward as a community?

[1] This is Where You Bite the Sandwich