There are only temporary bandaids for the grief we feel.

But I made myself believe I’d be okay regardless of how the election turned out. What mattered most, I told myself in that lofty tone of taking the high road, was taking a stand and being in the right side of history.

I did not worry. I woke up early on Election Day, and by 5:30 AM, I was on my way to Amador Dagudag Elementary School to cast my vote, hoping to beat the crowd by coming early. True enough, the school was only beginning to stir. And when I found my precinct—after temporarily being befuddled by the new cluster system COMELEC apparently just enforced—I found myself being the fifth in line to vote. The classroom was small, the chair I was made to sit in even smaller. It was a discomfort I was more than willing to take in, all for the sacred right of doing my civic duty. With the marking pen in hand, I stared at my ballot with trepidation.

For the first time in all my years of voting, I actually prayed. This was how crucial I felt this election was about. It was a fight for the fate of a beloved nation. And at the back of my head, a shrill alarm sounded: I could not take six more years of the same. That will be a total of twelve years. I cannot have more than a decade of commiseration—I simply cannot do it again.

I had never shaded a ballot so carefully in my life. Every circle was like a fragile thing.

When the machine finally accepted my ballot, and when I finally checked my receipt—the moment felt like a triumph. Before exiting, I asked the teachers on duty: “You know about Amador Dagudag, the man your school is named after, right?”

I told them that Amador ‘Amading’ Delfin Dagudag was a public school teacher and hero. He was born in 1922 in Pontevedra, Capiz, but later moved to Dumaguete, graduated in 1949 from Silliman University, and eventually became a science teacher. He died at the age of 45, and is known for his heroic act in protecting the ballots during the 1967 Senate election, which claimed his life. Lo-oc Elementary School, established in 1927, which was later called East City Elementary School, was renamed the Amador Dagudag Memorial Elementary School in 1969 in his honor.

“In the name of Amador Dagudad, thank you for your service this election season,” I said.

I hoped that made them feel at least heroic.

But I was happy to be done with voting in less than 10 minutes.

Later on, as I exited the school, I felt the first instance of panic setting in: I surrendered my voting receipt to a cardboard receptacle. That seemed weird. Didn’t we always drop our ballot receipts into metallic boxes with padlocks? This felt like an anomaly. Later on, I was assured by friends that it was perfectly fine. [In hindsight, was it?]

After a post-voting breakfast that Monday morning, I made my way home to catch up on lost sleep—and woke up in the late afternoon to panic on social media. Slowly, the anxiety dug deep, and even if I purposefully logged out of social media to stem the incoming grief, the need to know was stronger. I kept logging on and logging off Twitter and Facebook. It felt like digging one's own grave.

What was it that made this election season extra painful?

The return of Sauron, most of all.

Also perhaps the knowledge that so many young people, most of them first time voters, have had their hearts so thoroughly broken yesterday. Will they still believe in democratic elections when the system is so corrupted and rigged, there was no contest at all right from the very start? Will they be so disheartened they will contribute to the brain drain—all these brilliant young people opting to leave the country instead? I don’t know.

I felt especially hopeless in my nth realization that what seems to matter most is not competence or brilliance or hard work. People will chose a Robin Padilla over a Chel Diokno. So what’s the use of all our efforts to be good, to be competent, to be educated when apparently these are no longer valued by the community at large?

And then there was the sense of personal failure. When I was a literature teacher, I taught Martial Law literature as my contribution to the rising historical revisionism I knew was going on even in college. I feel like I did not succeed in the long run, I feel inutile.

That Dumaguete turned red this time around felt especially galling: I felt like an alien in my own hometown. The disappointment ran deep. When bedtime came, I found myself unable to sleep. I kept tossing and turning for hours on end, until my body exhausted itself from the anxiety. It didn’t help that the last two things I saw on socmed were the following: a glib post by someone urging everyone to add each other as friends in Facebook again, and a tone-deaf post by a local artist who posted something to the tune of X’ing the faces of every Presidential bet and declaring them not to be the answers—that “only Jesus Christ was the answer.” It annoyed me so much, I wanted to say: “You’re not helping, girl. Let people grieve. This is not how you win people over to your faith.”

I made my decision: my resistance will be both subtle and creative. I’m going to accept novelist Charlson Ong’s challenge: “The best resistance is work. Write our books. Make our movies. Help all those we can in times ahead. Don’t lose heart. Don’t be bitter. Work our butts off. Get out of our comfort zones. Do the darn best work of our lives in the next years.”

I woke up late today.

I made my body decide when it was the appropriate time to get up and face a world that feels hostile. My S.O. decided to cheer me up by taking me to a late lunch at Qyosko; then dropping by to see two new exhibits at Shelter Gallery and at Cafe Memento Gallery; and ending the day with early dinner at Himawari, where we commiserated over gyoza, gyudon, yakitori, and mochi ice cream.

Art and food. These were my bandaids. What were yours? 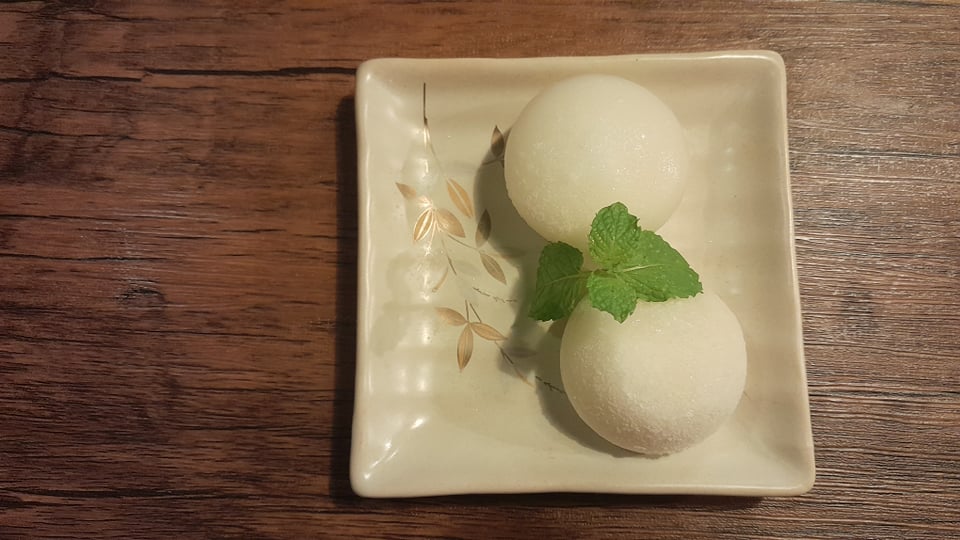