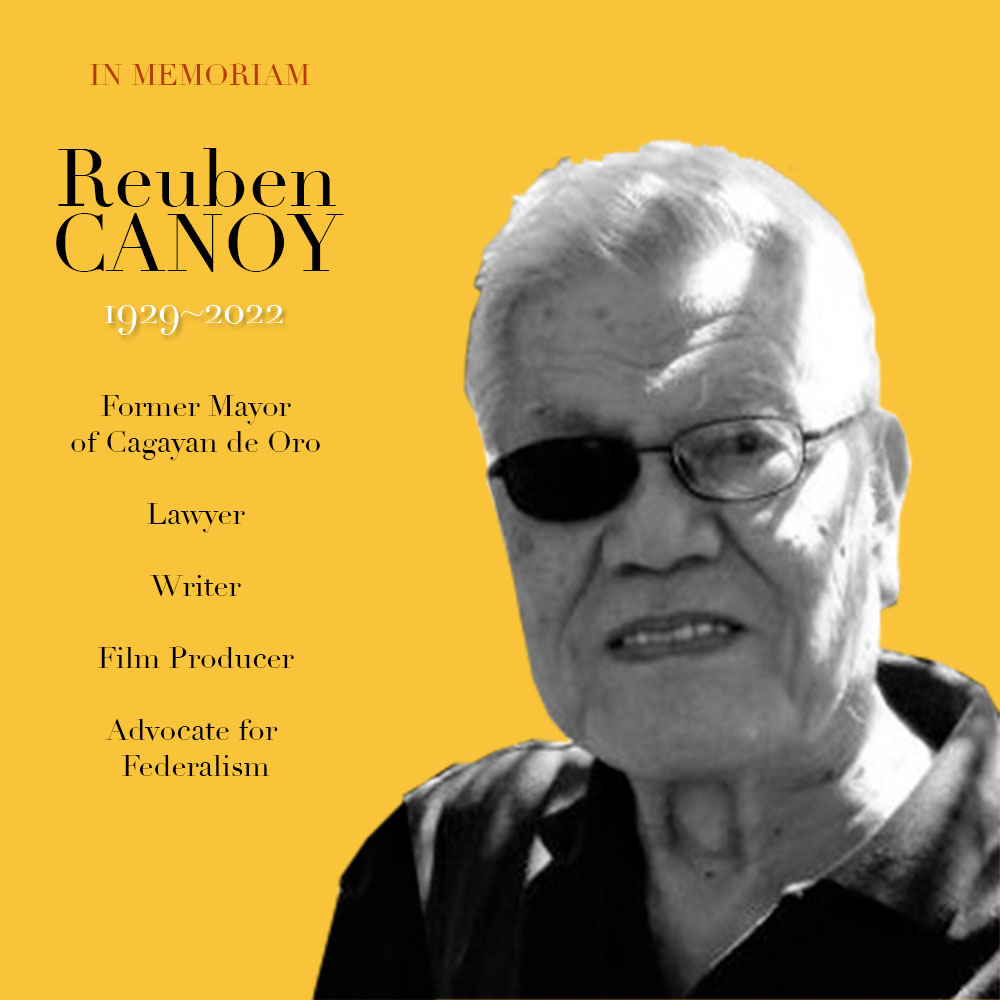 Reuben Rabe Canoy was a fictionist, poet, screenwriter, film producer, radio host, lawyer, politician, and staunch advocate for Mindanao independence and federalism. He was born on 6 June 1929 in Cagayan de Oro City. He graduated with an AA degree from Silliman University in 1952, after spending his collegiate years in Dumaguete City pursuing the literary life: he was a huge part of Silliman's post-World War II generation of writers who went on to great critical acclaim in the mid-1950s, together with Edilberto Tiempo, Edith Tiempo, Aida Rivera Ford, Ricaredo Demetillo, Eddie Romero, and Cesar Jalandoni Amigo. He was editor-in-chief of the 1952 edition of 𝑆𝑎𝑛𝑑𝑠 𝑎𝑛𝑑 𝐶𝑜𝑟𝑎𝑙, the university's literary journal, for which he was also known for contributing its now iconic emblem of a nude figure swimming underwater and gathering sand in their hands, which he designed in 1948. He published his fiction and poetry widely in national papers and magazines as well. In 1981, Leopoldo Y. Yabes would include his short story "Deep River" in the landmark anthology, 𝑃ℎ𝑖𝑙𝑖𝑝𝑝𝑖𝑛𝑒 𝑆ℎ𝑜𝑟𝑡 𝑆𝑡𝑜𝑟𝑖𝑒𝑠 1941-1955, published by the University of the Philippines Press.

After graduating with a law degree from UP, he dabbled in two different worlds: cinema and politics. In 1966, he was appointed Undersecretary for the Department of Public Information under the Presidency of Ferdinand E. Marcos, and also provided the story for fellow Sillimanian Eddie Romero's 𝑇ℎ𝑒 𝑃𝑎𝑠𝑠𝑖𝑜𝑛𝑎𝑡𝑒 𝑆𝑡𝑟𝑎𝑛𝑔𝑒𝑟𝑠, which is a film noir set in Dumaguete. He would later write the screenplay for Romero's B-movie horror film 𝑀𝑎𝑑 𝐷𝑜𝑐𝑡𝑜𝑟 𝑜𝑓 𝐵𝑙𝑜𝑜𝑑 𝐼𝑠𝑙𝑎𝑛𝑑 [1968], where he was billed as Ruben Canoy, and for Amigo's 𝐵𝑎𝑏𝑎𝑒 𝑠𝑎 𝐿𝑖𝑘𝑜𝑑 𝑛𝑔 𝑆𝑎𝑙𝑎𝑚𝑖𝑛 [1976], which he also produced under his film outfit Ruben Canoy Productions. He also went on to write and produce Amigo's 𝑆𝑎 𝐷𝑢𝑙𝑜 𝑛𝑔 𝐾𝑟𝑖𝑠 [1977].

While making headway into local film, he would become a member of the Marcos-era Batasan Pambansa. He would later run for mayor of Cagayan de Oro City, a position he held from 1971 to 1976. Together with fellow Mindanaoan politicians Aquilino Pimentel Jr. and Homobono Adaza, he formed the Mindanao Alliance during the Marcos years, and the three became known for being outspoken critics of the Martial Law regime. Of the three, it was Canoy who first hogged the national limelight when he emerged as the lone opposition candidate in Northern Mindanao to win in the 1978 Batasan polls. [At that time, Batasan members were elected on a regional basis.] In 1981, however, the three allies parted ways because of political differences, and Canoy would go on to form the Social Democratic Party of the Philippines with 14 members of various opposition groups, hoping to begin building a unified opposition to the then 16-year-old rule of Marcos.

He used his knowledge from his early association with Marcos to write a book on Martial Law, titled 𝑇ℎ𝑒 𝐶𝑜𝑢𝑛𝑡𝑒𝑟𝑓𝑒𝑖𝑡 𝑅𝑒𝑣𝑜𝑙𝑢𝑡𝑖𝑜𝑛: 𝑇ℎ𝑒 𝑃ℎ𝑖𝑙𝑖𝑝𝑝𝑖𝑛𝑒𝑠 𝑓𝑟𝑜𝑚 𝑀𝑎𝑟𝑡𝑖𝑎𝑙 𝐿𝑎𝑤 𝑡𝑜 𝑡ℎ𝑒 𝐴𝑞𝑢𝑖𝑛𝑜 𝐴𝑠𝑠𝑎𝑠𝑠𝑖𝑛𝑎𝑡𝑖𝑜𝑛 [1984], which many took as Canoy's diatribe against 𝑅𝑒𝑣𝑜𝑙𝑢𝑡𝑖𝑜𝑛 𝑓𝑟𝑜𝑚 𝑡ℎ𝑒 𝐶𝑒𝑛𝑡𝑒𝑟 [1978], a book in which Marcos touted the ideological foundation of his authoritarian rule. Of this tome, the late National Artist F. Sionil Jose noted: "Canoy ... has first-hand knowledge of the Marcos regime because he was Undersecretary of Information, Presidential Action Officer, and Chairman of the Southern Philippines Development Authority. As a writer in the early days of the Martial Law regime, Canoy was privy to the machinations and backdoor dealings in the Palace. His book is not only authoritative but also illustrates how power operates and how it also fails. He called the Marcos dictatorship a counterfeit revolution because like most intellectuals in the fringes of power he realized soon enough the shortcomings of a presidency surrounded by relatives and cronies who profited from that dictatorship."

Canoy also wrote 𝑇ℎ𝑒 𝑄𝑢𝑒𝑠𝑡 𝑓𝑜𝑟 𝑀𝑖𝑛𝑑𝑎𝑛𝑎𝑜 𝐼𝑛𝑑𝑒𝑝𝑒𝑛𝑑𝑒𝑛𝑐𝑒 [1989], where he began touting his dream for that island's political independence from the Philippines. He would also turn his attention to the issue of federalism, and once described the current unitary government as “a legacy of colonialism, whose centralized power suppresses democratic governance, thwarts local development and impedes nationalist progress.”

Canoy would continue writing even when he was deeply enmeshed in politics. He had a regular column for 𝑇ℎ𝑒 𝑃ℎ𝑖𝑙𝑖𝑝𝑝𝑖𝑛𝑒𝑠 𝐻𝑒𝑟𝑎𝑙𝑑. He also wrote two novels: 𝐼𝑠𝑙𝑎𝑛𝑑 𝑜𝑓 𝐹𝑒𝑎𝑟 [1987], which is about an armed band roaming the countryside, posing as communist guerillas and terrorizing the rural folk, who are in reality members of an operation supported by American agents, high-ranking military officials, and right-wing businessmen; and 𝑇𝑒𝑟𝑟𝑜𝑟 𝑖𝑛 𝑃𝑎𝑟𝑎𝑑𝑖𝑠𝑒 [2006, co-written with his brother Nestor R. Canoy], which is about a good American caught in the webs of deceit by a dictator and the nefarious activities of the CIA.

He would run for President against Marcos in 1986, and in 1990 he was arrested and detained without warrant by the military for his alleged involvement in a coup staged in Northern Mindanao led by Col. Alexander Noble.

He was also a long-time radio personality. In 1952, he convinced his brother Henry to turn his fledgling radio station in CDO into a more powerful network. This became Radio Mindanao Network. Until his later years, Canoy would host an early morning radio program, “Perspective,” which ran for 64 years on RMN. In 1971, for his contributions to mass media, he would be conferred the Outstanding Sillimanian Award.

In 2013, he made a brief return to film when he was announced as one of the winners of the Genre Film Scriptwriting Competition organized by the Film Development Council of the Philippines, for his unproduced screenplay “The Unbelievers.”

He married Solona Torralba in 1953, with whom he had four children, Rhona, Chet, Marc, and Don.

For many of his avid radio listeners, he was known for his trademark sign-off: "Ang lungsod nga nasayod maoy makahatag og kusog sa demokrasya. Apan ang lungsod nga mapasagaron, maoy makapukan sa atong kagawasan. [The city that values knowledge is what gives strength to democracy. But the city that is foolhardy is what will destroy our freedom.]"