Two weeks ago, I wrote about the launch of the Elizabeth Susan Vista-Suarez International Choral Festival, set to begin its first edition in 2023—and how in a way it is a cumulative effort of a very long tradition of choral music in Dumaguete.

I thought of putting on paper exactly that long tradition. [Some of these information comes from Handulantaw: Celebrating 50 Years of Culture and the Arts in Silliman University, a coffeetable book I edited in 2013.]

In Silliman University, the aspiration for quality education, with the attendant promotion of its cultural events, has always been incorporated with the quality of Christian faith, which permeates every aspect of university life. Music, needless to say, has helped in the permeation. It has invariably played a significant and integral role in the development of the university, which can be traced back to Silliman’s earliest history.

When Silliman Institute was first established in 1901, there was still no offering of any formal courses in music, and consequently, the earl teachers taught subjects ranging from pre-English to pre-college courses in Latin, German, and geometry, and even other courses like geography and arithmetic. They had Bible studies on Sundays. Interestingly, however, even if a band and an orchestra were already in existence as early as 1906, there was still no Department of Music.

At that time, however, Silliman founder and first president David S. Hibbard already spoke of a vision to establish a music school which he hoped would be accomplished sometime in the second quarter of the Silliman’s existence. But that eventually happened in 1912 when the school administration decided to create a Music Department under the purview of the College of Arts and Sciences. In the early years, the Music Department was responsible for organizing the music groups on campus, which also included the Silliman Glee Club.

In 1931, a music program featuring the Lopez and the Kabayao musical families inspired Board of Trustees Chairman Charles R. Hamilton to fulfill what had been Hibbard’s vision of a music school, and suggested that a Conservatory be established to train teachers for the supervision of music education in public schools, as well as produce professional musicians among young Filipino talents. The next year saw Hamilton’s vision for come to fruition when the Hibbards transferred to a new home, with their old home converted to house the growing music community on campus. Subsequently, in 1934, the Music Department became the Conservatory of Music under the leadership of Geraldine Cate, the founding director of the Conservatory, who was also its first voice teacher. Choirs for church services, as well as vocal quartets, were organized and which traveled to other town churches in Negros Oriental. It was during this time that Covenant Choir [for Sunday services], the Pilgrim Choir [for Friday convocations], and the High School Choir [later the Youth Choir, for the high school’s own early Sunday morning services] were organized.

After Cate left for the U.S. in 1938, the person who maintained the stability of the Conservatory was Mercedes Magdamo. Her stint was transitional as the school was still in search for a full-time director. The vacancy was eventually filled by Ramon Tapales, an accomplished musician educated in Milan and Berlin, and who served Silliman from 1940 until the arrival of the Japanese in Dumaguete during World War II. Under his watch, the Conservatory of Music acquired a grant from the government to offer a Music Teacher’s Certificate for voice, violin, and piano in 1941. That year, the “small” center of culture in southern Philippines no longer carried the Conservatory title; it simply became known as the Music School, which had, by then, entered a period of solid progress.

After the traumatic lull of World War II, which saw the building housing the Conservatory burn to the ground, students began enrolling back to study piano, voice, and the violin. The School of Music was back in business by 1946, with Mercedes Magdamo as acting director, a post she held until the arrival of Mary L. Reese, a choral conductor and organist. Miss Reese expanded the choral program by adding a secular choir, the Silliman Singers, to the roster of established choirs. She introduced larger choral works for presentation by the combined choirs and singers from the community at large, and initiated a tradition of presenting George Frederick Handel’s oratorio, Messiah, during the Christmas season of 1949. The tradition of presenting operettas in the amphitheater was renewed.

William Pfeiffer became the school director in 1953, and through his initiatives, the School of Music was able to augment their collection of musical instruments, generally improving the music program at Silliman. Under his leadership, Silliman soon started to gain recognition in the country for its choral music program, which, since then, has become the forte of Silliman—a pioneering effort in the Philippines. The school took a considerable leap forward with Pfeiffer at the helm. Sixteen new courses in music, including classes on music education, a task heretofore undertaken by the College of Education, were offered. By 1952, it was now possible to earn a Bachelor of Arts degree with a major in music. Student population grew, the orchestra was revived, the music school played a dominant role in the Silliman Church, and music in general became even more prominent in the life of the campus. 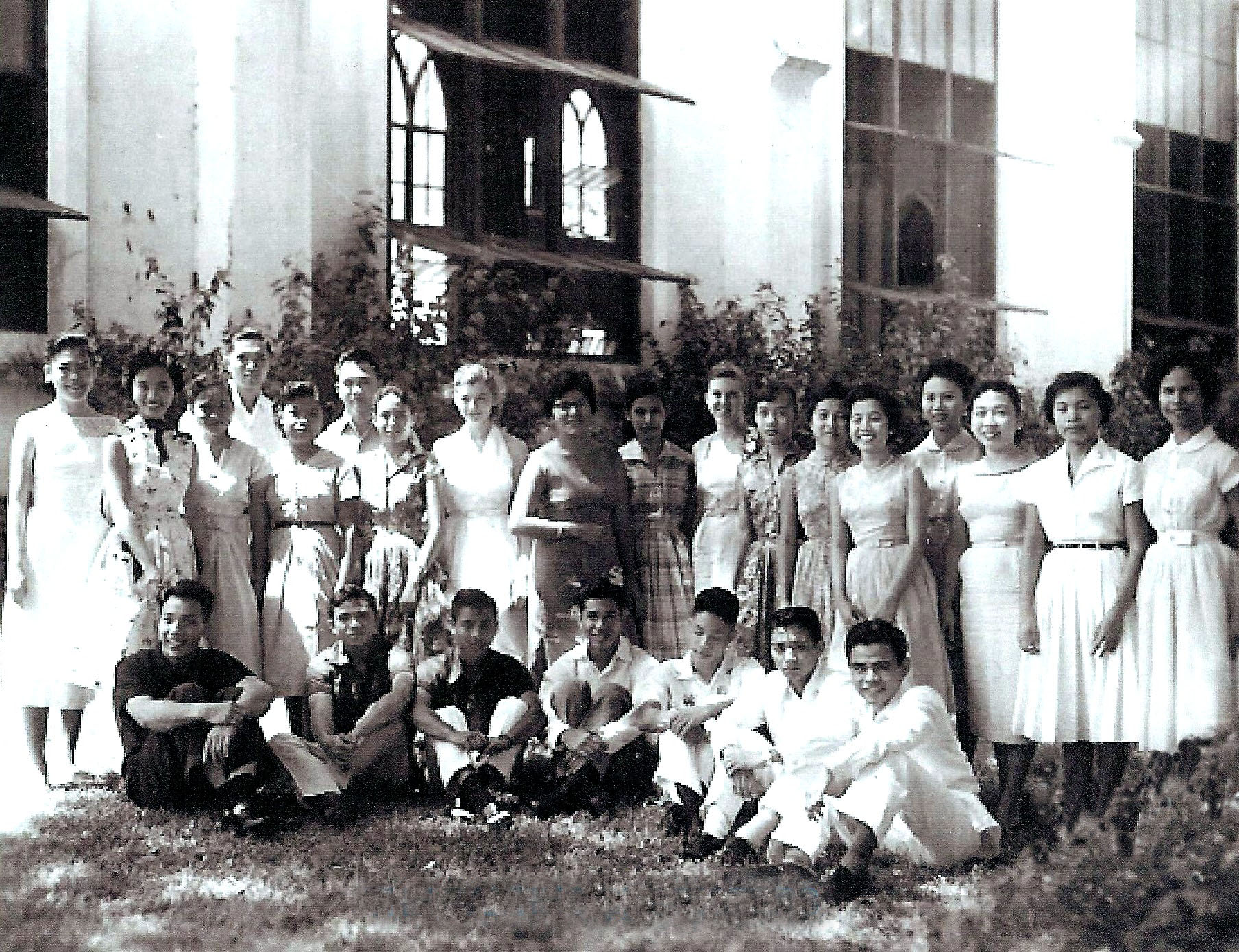 The Silliman University Campus Choristers in the 1950s 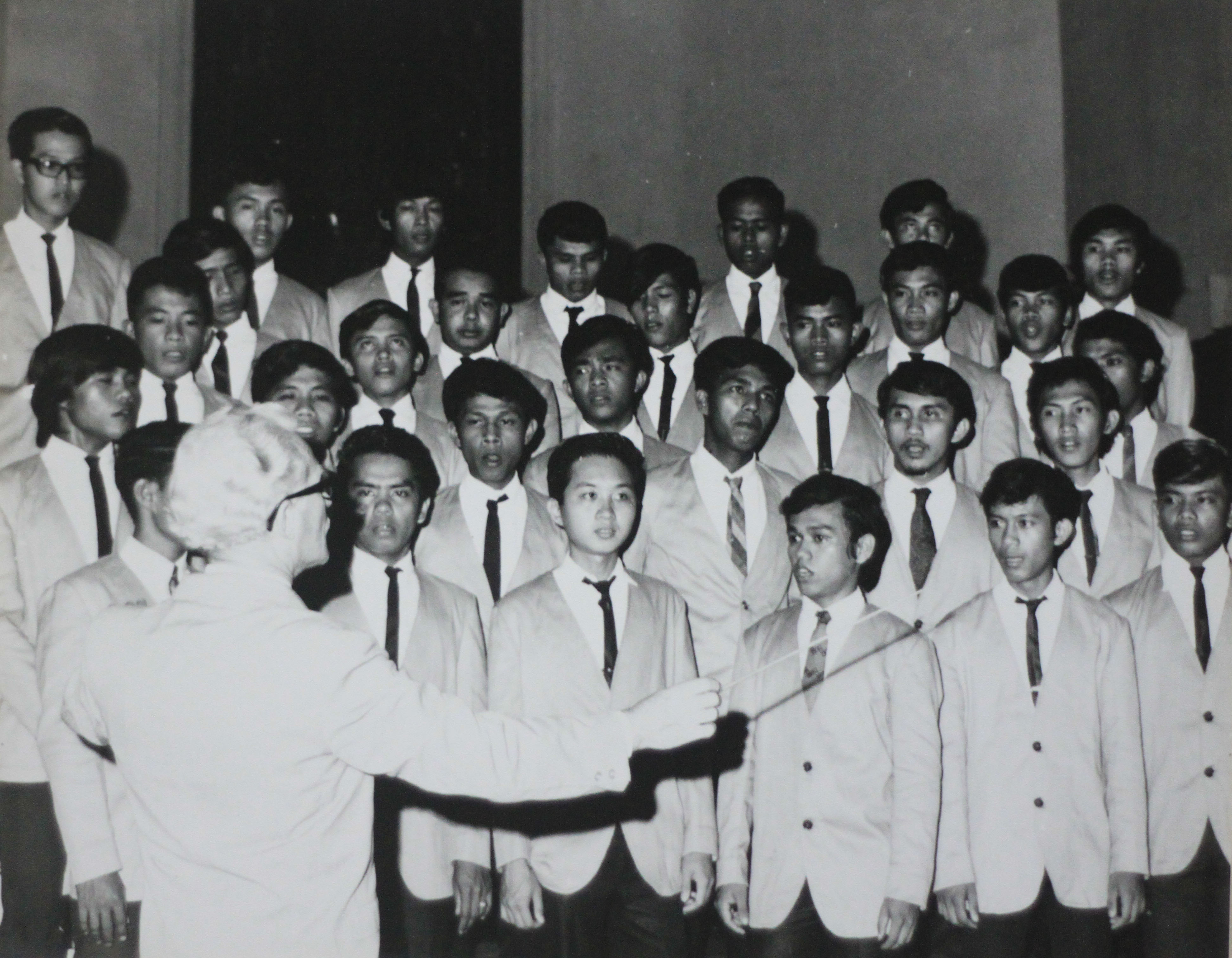 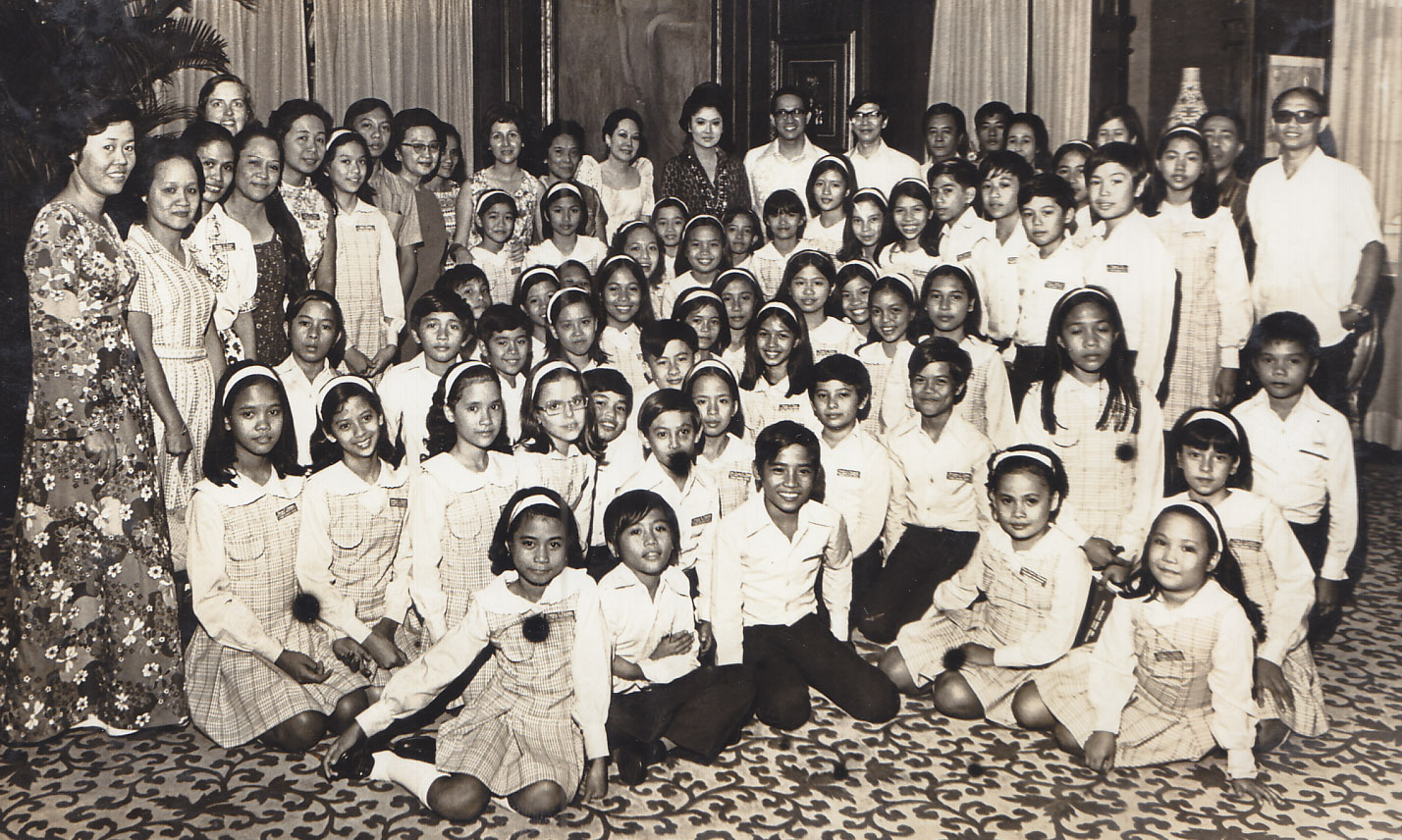 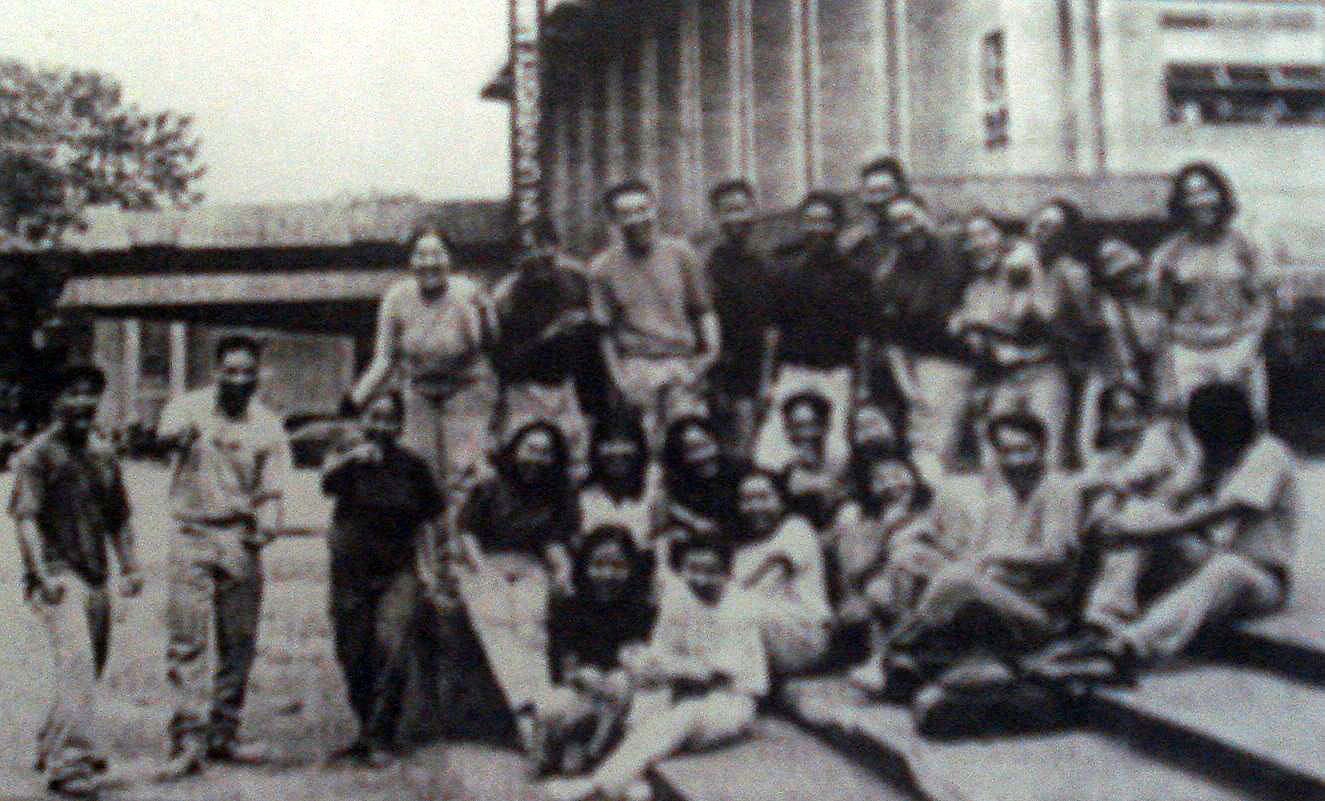 The Campus Choristers in 1999 with Elizabeth Susan Vista
The decades of the 1950s and 1960s were considered the golden years of the School of Music. For one, the arrivals of Pfeiffer and Albert Louis Faurot strengthened the faculty line-up, which, by 1957, had seven top-caliber musicians. Faurot would later form the famous ALFALO Trio with Peregrino T. Aledia at the clarinet, Faurot at the piano, and Zoe R. Lopez at the violin. In 1962, Faurot would also organize the Men’s Glee Club, building on the earlier efforts by Rev. Thomas Lung, who formed an all-male choral group, the Seminary Singers, in 1951 at the College of Theology. In 1966, Leland L. Chou also organized the Women’s A Capella Chorus, the female counterpart of the Men’s Glee Club.

One of the school’s faculty members, Priscilla Magdamo [now Abraham], received a grant from the Rockefeller Foundation to help her research on the folk music of the Visayas. (In 1952, while she was still in high school, Magdamo was also responsible for forming a fledgling choral group composed of the children of faculty members, with co-founders Ruth Imperial [as pianist] and Elmira Layague [as organizer]. They organized a concert to raise funds for a pew slated for the newly built Silliman Church. That group later on became the Silliman University Campus Choristers.) Magdamo’s research on Visayan folk music also yielded another choral group in 1957—the Folk Arts Ensemble, which was tasked to perform in 50 cities all over the country the very music recorded for the project, and in the regions the songs were taken from in particular. The project contributed significantly to the developing greater public appreciation for traditional Philippine music.

Isabel Dimaya-Vista became head of the school in 1974-1976, and under her tutelage, the Silliman Young Singers Choir, a group of choristers from the elementary school which she co-founded with Gloria Villanueva Teng, became a fixture in various programs in the community. The group later won First Place in the Children’s Choir Category of the 1973 National Music Competition for Young Artists. Their victory led to an invitation to sing for First Lady Imelda Marcos at Malacañan. They also won, as part of its prize, a bus—now an iconic figure in Silliman campus. Dimaya-Vista would once again become school director in 1981-1985. It was during this time that the 5-year curriculum of the Bachelor of Music degree was reduced to four years. After her departure for the U.S., various people filled the position of school director (and later dean), including Vienna Jumalon-Silorio. Under Silorio, the Women’s Ensemble was organized by Dr. Marybeth Lake, and the defunct Men’s Glee Club was revived by Ceasar Pacalioga, an alumnus who had musical exposure in Malaysia.

Elizabeth Susan Vista-Suarez [then Zamar] came home to Silliman in 1989, and armed with an MA in choral conducting from the Combs College of Music in Philadelphia, Pennsylvania, she reorganized the Campus Choristers. Under her tutelage, the choir made a steady stream of achievements. In 1998, it reached its popular peak when it was chosen by the Cultural Center of the Philippines as the Philippine Centennial Goodwill Ambassadors to the United States. The choir completed an eleven-state tour of America in 1999, with keynote performances at the United Nations for the UNICEF, the Riverside Church in New York, at a festival in Disney World in Orlando, Florida, among others. She returned to the U.S. with another tour, this time with the group temporarily rechristened the Silliman University Gratitude and Goodwill Ambassadors [SUGGA], which heralded the centennial celebration of Silliman University. After this stint, she formed a community choir named Ating Pamana, which also toured the U.S. in 2003. These forays into choral conducting also saw the release of several recordings and concerts, as well as tours all over the Philippines, and won plaudits in various competitions, including the National Music Competition for Young Artists in 1996. Under her, the Campus Choristers staged several successful concerts, including Sariling Awit and Yari in 1998, and Huni, Tutti, and Spectrum in 1997.

Vista-Suarez’s leadership also led to the offering of a master’s degree program in 2000, with majors in Choral Conducting, Instrumental Conducting, Ethnomusicology, and Music Education. Today, six major choral groups still exist in Silliman: the Campus Choristers [under Vista-Suarez once more], the Covenant Choir [also under Vista-Suarez], the Pilgrim’s Choir [under Alexie Dagaerag-Miraflor], the Men’s Glee Club [under Nathaniel Bicoy], the Women’s Ensemble [under Maria Elcon Cabanag-Koerkamp], and the O’Clock Choir from the Divinity School [under Jean Cuanan-Nalam].