Those who say blogging is something personal, something they do only for themselves, have blinders on. Or are at least lying to themselves. Blogging is an act of public performance, and as such becomes public property, consumable and easily lending itself for praise or attack. (Trolls, however, are another matter.) What we blog about may be for us highly personal -- sometimes we even go as far as keep some of our URLs secret from prying eyes -- but there is a secret and unacknowledged want to be read, for our dirty laundry to be available for the rest of the world to see. We perform for the voyeur really. It's just in the very nature of the Internet medium. That is why some of my happiest, and many of my saddest or most perverse moments, never make it as blog posts. There remains always our offline lives that we really don't chronicle, just because. Blogging is a creation of a persona, and by God, it is an edited one whether we acknowledge it or not. 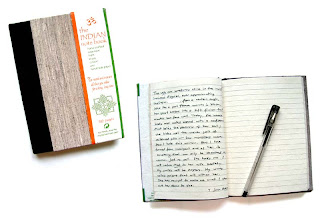 Which may be why I have gone back to journal writing, something I've abandoned for much too long. I bought the notebook above in Chennai, India -- and there's something about its pages that's making me spill everything, uncensored. In its pages, you will see my blood and my guts. Sometimes it's scary, but most of the time it is liberating. I'll still blog, of course. We need that kind of outlet for the more outlandish sides of our selves, the ones that beg attention from the world. But there are also other things we need to keep to ourselves. We need some of our secrets to really be able to live. A man without secrets is nobody interesting.