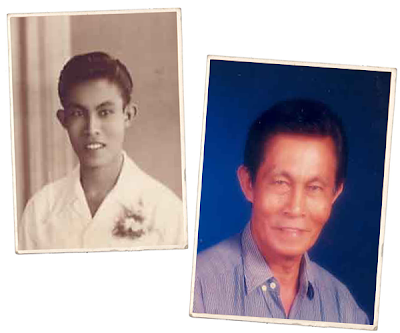 I almost forgot it was Father's Day. But here's something for Papa, who died ten years ago, when I was still young, and he had never known me for everything that I was, or am, or have become. I regret that. Papa and I never had the closest of relationships: I was a certified Mama's Boy (she and I share the same birthday, and I am the youngest child), and when I was growing up, he wasn't there. He was somewhere else trying to make a living, or so he said, and came back to our lives when we were mostly grown up and had learned to be our own private Oedipuses. People used say I look like my father -- and I would recoil from that. Used to hate the fact that I carried his name. Today, I have grown mature enough to take that as a compliment. "I am my father's son," I tell myself now. Now, so many years after his death, I regret not giving myself the chance to know him better. Such was my guilt that I tried to bridge that void by writing a short story largely inspired by him. (That story, "The Hero of the Snore Tango," won second prize in the Palanca in 2003.) My brother Edwin tells me that Papa was a great man, undone by the strangest circumstances, and mostly because he stuck to a code of personal integrity and honor. I wish I had known his story more. A few years ago, Sir Krip (Yuson) and Sir Jimmy (Abad) invited me to submit a poem to their anthology Father Poems. Here was my take of Papa's memory:

How to Believe in Ghosts

Because, father, there was no chance to believe
In the impossible: the freshly-dug earth, now
Your home, was mute as was usual, turning away
Even the last howl of mourners coming near.
Their black grieving did not understand, as we did, that
Ties which bound could come loose as the grass that
Would feast on your memory six feet above could, as
Ground swallowed-in the digging for mortal remains.
We are told, as the funeral flowers wilted in the sun, that
Memories should be immortal, but we prayed for no ghosts.
The dead should not speak. We prayed, instead: father, we
Forgive you, for you have sinned. And the burial
Became growing silence as we soon dispersed for lives spent
In battled reflections, the muteness of years bearing down
On children struggling to forget by the bottom of
Beer bottles, or the occasional want for punish. Soon, we
Come, year by year, to some bidding, somehow,
For holy days kept precise—that last excuse—to
Listen to some eternal knell your spirit might tell.
Our candles now burn low to capture some
Semblance of closing, the way the ghostly smoke
Wisp among flowers, down to the carabao grass kept
Trim. We wait, and we wait. And life and silence
Become memories built on flimsy hopes, as they must,
To resound to a kind of winged believing.
And then we learn persistence, by the passing
Of days, that even the living must learn to reclaim
Their dead, to Live, to now close
The prayers with which we can finally love
Our dearly departed.

I miss you, Papa.