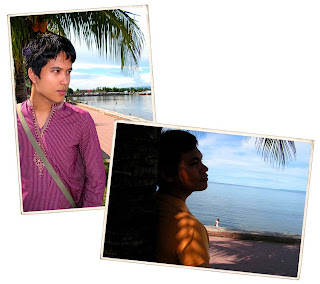 ... and so it was. A great Saturday. The last time I remember having a great Saturday like this was two or three years ago -- which is an eternity -- and Mark and I had decided we wanted to eat everything and anything we found for sale in the Rizal Boulevard. For those who do not know how Dumaguete looks like, the small city faces the elegant blue of Tañon Strait in the Visayas, and hugs the harbor with a paved boulevard lined with old fir trees, grassy spreads, and old Spanish mansions, some of them since converted into hotels and restaurants. This is the heart of Dumaguete, where everybody meets the sun jogging or doing tai-chi early in the day, and picnics in the middle of the afternoon, and congregates for late-night dinners in a variety of restaurants now mushrooming everywhere. That Saturday three years ago, Mark and I walked around and had our fill with vendor delicacy: from boiled sweet corn to balut to sliced green mango dipped in bago-ong, to tempura. That afternoon remains to date one of the best Saturdays we've ever spent together.

Yesterday, much to our delight, equaled that long ago pleasure -- but this time, our "trip" was decidedly upscale. And we no longer had to walk: there was a car now to bring us to whatever we fancied on going to. Talk about age and progress.

I don't know how we can tell how the best of days exactly begin -- there is no science to this, only a hopefulness that all things fall to a precise and perfect fit -- but this one began with a Friday night of pain. I had been doubling up all night long in a strange case of food poisoning, which went away as easily as it came.

Saturday came with promise of a humid sun. And so we woke up late in the morning, Mark and I, ready to slog through the sweat and the weight of an innate tiredness, which didn't come. Mark, who has the best instincts for our pets (he just knows things, an instinct I envy), had cleaned the hamsters' cages Friday night -- which was the right timing because by noon of Saturday, our Russian dwarf hamster Coffee gave birth to her second litter of cute pups, which was a beautiful sight. We fretted like worried parents. Imagine that, two grown men going about in strange velocity, fretting about hamsters.

Later, we went to Mark's place to get Pepe's package. Pepe was back in the Philippines from Chennai, and was visiting Iloilo, and he had sent Mark a beautiful Indian shirt (see above). He also sent me a gorgeous notebook and a precious DVD of Lagaan, that Indian film which was the first Bollywood musical to get nominated for a Best Foreign Language Film Oscar, and which I could never seem to get anywhere, not even my trusty pirate. (Thanks, Pepe!)

After a late start, we went for Mark's weekly shave at Barberia -- and he went out looking like a swanky teenager. In Pepe's dashing Indian shirt. We had a great late lunch in Sans Rival (Mark has the chef's salad, I had this buttery concoction of a fish dish that melted in my mouth) ... and then we went to the Boulevard for a quick Saturday shoot ... and then went to Lee Super Plaza for a lazy ice cream parfait and chocolate cake dessert. We also bought new t-shirts, just because. Because I needed my two cups of coffee, we went to Don Atilano, where we met up with photographer friend John Stevenson and society don Manolet Teves, who regaled us with stories of the elegant 1970s Bais -- one of the major settings of the novel I am working on. (Oriental Negros in the 1950s to the 1970s was the heart of Visayan high society -- now decayed, and disappeared.) Manolet, in fact, gave me an idea for a working title: "The Long, Hot Summer." His was a recollection tinged in regret, however. "Tara is gone," Manolet said with a dramatic finish. That may be, but I have definitely decided I am going to resurrect it with my fiction.

Then we went to have dinner at Persian Palate, and then we went home. And a great Saturday came to a graceful end.