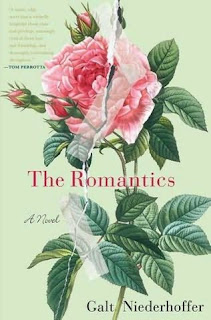 I bought Galt Niederhoffer's The Romantics in BookSale a few days ago based on Janet Maslin's admiring review of the book in The New York Times a few years ago. I've read excerpts of it online, and found the language biting and witty in its satirical take of a WASP wedding set in New England. The story -- about a close-knit, if incestuous, group of nine friends who found each other while matriculating in Yale -- is meant to be an amusing dissection of white upper-class mores, and it is detailed in that regard (comparable perhaps to the taxonomy of the elite class explored by Edith Wharton, but informed by The Official Preppy Handbook), and Niederhoffer rises to the occasion with a sharpened scalpel, expertly treading the fine line between comedy and social butchery. During the rehearsal dinner scene, for example, one character toasts the groom of the WASPy bride this way: "Congratulations! You've social-climbed your first Everest." I enjoyed the book, even when it is about a hoary subject, which is treated a little too lightly. But I like its tone and its expertise of its subject matter; there is no false note here.

Which is something I cannot say about the movie adaptation, starring Kate Holmes, Josh Duhamel, and Anna Paquin -- and megged, incredibly enough, by Niederhoffer herself. It is as if the author, now the film director, forgot entirely what she wanted to do and say in her book, jettisoning much of everything (including the social commentary!) to do a Hollywood-specific focus on the romantic entanglements of the characters, which, if you ask me, are purely incidental in the book.

It is miscast, it is horribly acted by an otherwise capable cast, it is photographed so slovenly and drearily that I winced at every scene raped by cinematic miscalculation. I had to ask: how can Niederhoffer murder her own novel with this travesty?