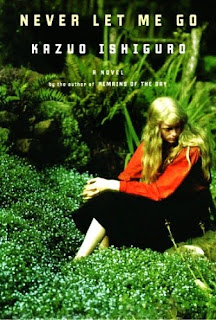 I thought I'd read the book first, and then watch the film adaptation later. I've had the book for so long, but it was just there, among the various unread titles in the bulging bookshelves lining the walls of my apartment, waiting for my attention to wander and perhaps fix on it. The film kicked me towards the effort, and the way the book begins, "My name is Kathy H. I'm thirty-one years old, and I've been a carer for over eleven years...," struck me as strange, a little off-putting perhaps. I've read Kazuo Ishiguro before, in his timeless Remains of the Day, which was a great read, notably the masterpiece of a great stylist, and the deadpan way Never Let Me Go begins, complete with that strange abbreviation for the narrator's surname, did not exactly take to me as Ishiguro territory. But I was wrong. Because this is Ishiguro being a literary virtuoso, conjuring an entire and complete landscape of emotions and memory that had me occasionally gasping for air. Pieces of it are brilliant, they can almost stand as complete short stories themselves. And that section before the end, when Ruth exhorts Kathy and Tommy about what they must do -- that did me in. It was devastating. The whole book is devastating, and it's a cliche to say this but I could see pieces of my own childhood -- its hurts and recriminations, its playfulness and wonder, its consuming worldview -- in Hailsham, where the characters, when they were young, lived a kind of shadowy lives, strangely accepting of their peculiar lot (and fate) in this world. And that ending in that field in Norfolk -- where all lost things can be found -- is a finely-wrought set piece of utter desolation and hope, it was wrenching. The book made me sad, which is not a damning condemnation. It just seemed to me to be an uncanny looking-glass, totally unexpected, not exactly wanted, but it's there, I read through it, and I, left breathless, have nothing else to say.