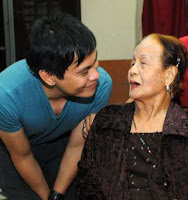 I have always wondered why people called National Artist for Literature Dr. Edith Lopez Tiempo “Mom Edith,” always with this measure of intimate familiarity that seems reserved for someone who is more than just a mentor. I was 20 years old when I first met her. I was a campus writer who wrote for the student paper in Silliman University—where she had taught for many years—and in 2000, I was told to apply for the National Writers Workshop.

I was told this was the oldest writing workshop in Asia, founded by her and her husband, the late Dr. Edilberto K. Tiempo. I was also told that this workshop has produced many of the best writers in contemporary Philippine literature. When I went in that fateful Monday in the Dragon Room of the College Assurance Plan building in May 2000, I saw them all around that Mount Olympus at the center of the workshop room—Gemino H. Abad, Alfred Yuson, Marjorie Evasco, Susan Lara, DM Reyes, the late Ophelia Dimalanta, Anthony Tan, Jaime An Lim, Ernesto Superal Yee, Cesar Ruiz Aquino, Bobby Villasis—and they all looked … normal. They were inexplicably down-to-earth, these gods of literature. They made it easy for me, the intimidated initiate, with my first brush with the highest literary circle of the Philippines.

But Mom Edith was special. She was affectionate, but she was also exactling. She took my juvenile short stories I submitted for that workshop—two of them of controversial graphic nature only a young man with the predictable fetish for shock can write—and she critiqued them with the fine comb and gusto of the best formalist, the standards of the most demanding teacher, and the compassion of a mother. I think she knew that I was—that we were—there to learn, and so, like all the greatest teachers in the world, she poured all knowledge of writing magic she could give and made it sound clear, reachable, if exacting. I first became a better writer because of her. If writing is my life, then I owe much of that life to her. She led the way, she opened the door further, she made writing matter. And often, when you visit her in her house in Montemar, she gives all that with an extra measure of tender loving, complete with mango ice cream and cake.

How then can you not call someone like that “Mom”?

Years later, I too would be publishing my own works. Since 2000, I’ve always made it a point to go to her office in CAP, and later on in her house in Sibulan, where we would sit together for hours—just the two of us—and she would tell me her stories of her girlhood in Nueva Vizcaya, her short stint as a movie actress for Sampaguita Pictures, her fateful correspondence and then courtship with the man from Leyte, her move to Dumaguete, her stay in the hills of Valencia during the Second World War, her stories of Iowa, her children’s stories which she hoped would in the future be compiled into a book. I found all these fascinating, and she delighted in the telling. I must have seemed to have hungered for more, and she must have known this, because later on, in her scrawled dedication to me in her book An Edith Tiempo Reader, she wrote: “For Ian, who likes to hear stories, not just to write them! Mom E.”

And besides the usual care for creative writing, what I have also learned from her is to never forget the people in your life. She never forgot anyone—even in her later years. Anyone could come up to her and say, expecting non-recognition: “Mom, do you remember me? I’m so-and-so. I was in the [place any year here] workshop.” And she would brighten up and say, “Welcome home, son!” or “Welcome back, my dearest!”—and then proceed to recite a line or two of your own poetry, or an image she remembered from your story. She was that amazing.

Years later, when I too would have my turn of going to Iowa as a writer, I almost thought of it as coming home. It was where she blossomed as a writer, and my own sojourn there seemed like a perfect salute to her dedication to us all.

Last Sunday, when I received the call that she was being revived in the emergency room of the Silliman Medical Center, I dropped whatever it was I was doing—and rushed, like a crazed man, to her side. I was five minutes too late. She was gone. But as I helped cover her body with the hospital sheet and brushed back her hair and held her hand which was still warm, I grieved.

All of Philippine literature grieved with me—and we have been grieving many days now. Because it is such deep pain to lose a mother. As a former fellow of the workshop posted only last Monday in our Facebook page: “We have been orphaned.” And that was the simplest truth. We have been orphaned of someone who kept deep faith in our being writers, who knew each one of us and each one of our names like we were always her children.

Goodbye, Mom Edith. All that you were—your fantastic life and your deepest measure of love—are things which you ran and breathlessly handed over to us, your children. And for that, we give our heartfelt thanks.