Many of us were complicit, perhaps without our knowing it, in the grand project of perfuming the reputation of the Marcoses after they were allowed to come back to the country. They played the long game, insinuating themselves into the public's consciousness, slowly crafting a story of redemption that would have eventual fruition years and years later. What a fantastic gameplan, and we were hoodwinked!

Case in point: this 23 April 2003 issue of Flip Magazine, a publication edited by novelist Jessica Zafra. This was 19 years ago, around the time [according to a report by The Washington Post] that the Marcoses laid the grand plan on how they could stage a comeback, which would involve winning the hearts and souls of Filipinos through media, and revising history in the process. 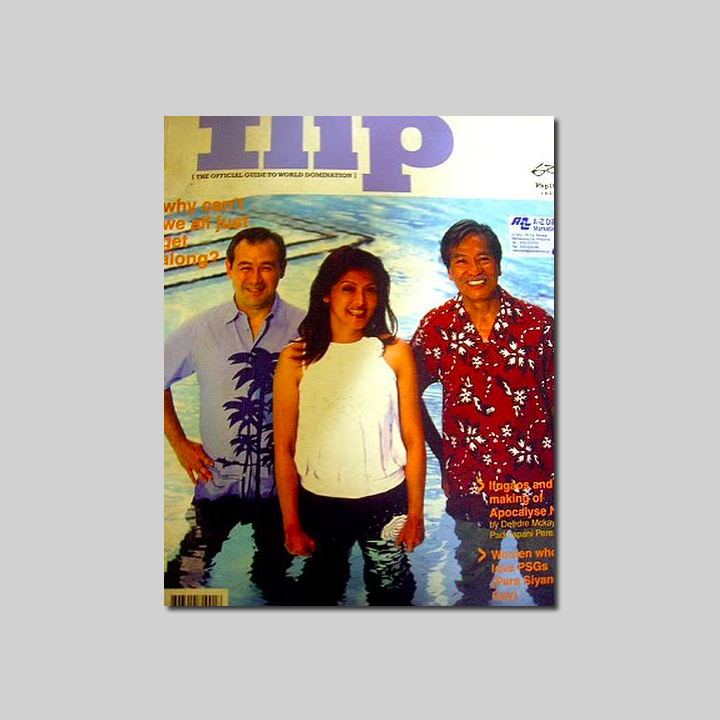 Adam David shared this photo on Instagram yesterday. In that same post, Jessica gave this response: “That was a mistake. We thought we could do profiles of people who by all rights should be tearing each other’s throats out, but were actually cordial [at least in public] and were all in Congress at the same time, sometimes on the same side of an issue. If you read Roby Alampay’s interview with Imee Marcos you will see that it is a real interview in which he asks her questions which society magazines do not touch. About the time her mother’s plane had left Rome airport and she had it turn around because she forgot to buy cheese. (She confirmed it). And her mother’s shopping sprees and enormous entourage. (So cool, she said.) Her human rights cases, the abuses of power. She answered everything. The piece is heavy on irony, and she knew it and participated anyway. The funny haha cover is a terrible mistake. As editor my mistake was in treating her like a regular human being. Lourd de Veyra did the interview with Satur Ocampo. I did the interview with my former publisher and mentor, who at the time was closer to me than my parents. I ended our friendship in 2016, in the last column I ever wrote. Flip Magazine died shortly afterwards, not that it’s any consolation.”

The soft onslaught continued over the years, with all kinds of magazines and TV shows featuring many “gilded age stories [of the] Marcoses,

” as CNN Philippines’ Don Jaucian observed. We swooned over Borgy Manotoc as a heartthrob. We marveled at Imee’s Philippine Tatler cover. We giggled over Imelda’s cameo in the film Mariquina. We were subconsciously taught to “move on” when Kris Aquino interviewed Bongbong on TV in 1995 — because if Kris could move on, why couldn’t we? Most. Likely. All. Part. Of. The. Game. Plan. We allowed this for almost 20 years or even more, thinking it was all harmless. Now it has bitten us in the ass: we learn too late that soft power is tremendous power — and lifestyle sections of newspapers are never not political. Their ruthless effectiveness lies in the sheen of their being seemingly benign. The Marcoses already knew this at the height of their powers in the two decades of their rule — they used the arts to perfume their stench, and even until now we have apologists who use these totems of cultural patronage as signs of a “golden age.”

Jessica Zafra’s admission — that her mistake was in treating [a member of the Marcos family] “like a regular human being” — is telling. This, I think, was the heart of the gameplan. To turn their story around as the poster children of massive thievery [according to the Guinness Book of World Records] to that of being regular human beings, just like you and me, who also hurt, who also make mistakes, and who implore you to not treat them like the shadows of their ancestors. [Bongbong’s recent words.] But they are not regular human beings. They have billions [of our money] at their disposal to finance a long game to hoodwink us. The redemption story they want you to buy has been cleverly baked for you, with all of our help [knowingly or unknowingly] — and you ate it up.

Many of us are so ready to blame the masa for being
“bobo” for voting the way they did this year. But, as Biboy S. Hernandez would like to remind us, the elites were the first to welcome them home, and the middle class fawned all over them. It’s so easy to be complicit pala, we realize too late.
We allowed 2022 to happen a long time ago.