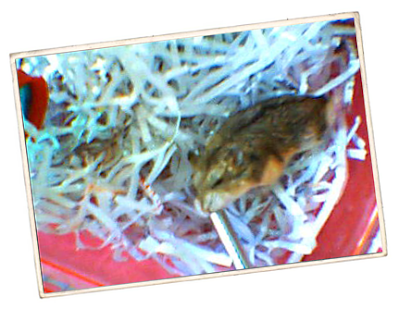 It's funny now how we dared name you after a beauty queen -- Aishwarya Rai -- thinking you were a girl. We did not know how to tell between girl and boy dwarf hamsters then, almost a year ago, especially not you and Sush (whom we named after Sushmita Sen), because you were both so small and so frail-looking when I first saw you in your dirty cage in that God-forsaken pet shop. Our first thought was to rescue you both, give you a better home. And we did. We really didn't know how to fix the question of gender, but we knew how much we loved you. We just lost Ushka then, that sweet guinea pig, and we had shed buckets of tears. So when I took Mark to the pet shop, I just had to buy you: you beckoned the way love snares -- into a quiet surrender that grows into embrace. How you both grew up so fast. The tiny bites you gave us in the beginning soon turned into a trusting knowing of our scent, and soon you played in your wheel, on our bed, on our palms. Later, we realized you both were boys and so we decided to shorten your names to Ash and Sush, because they sounded better that way. Some time ago, Sush died, and you were left all alone. We thought you'd quickly follow because dwarf hamsters get so used to their companions that we figured solitariness would not be something for you. But you thrived instead. You became an even sweeter boy, and everyday we would look at you and realize that in your tiny body contains all human capacity for loving. But today, you got sick the way Sush did. I don't know when this will end, but I look at you and I can't help but cry over how frail you look, how small and emaciated. It's strange to me to consider now how we are able to love furry little things like you, but does it matter if we know the answer? This is enough, this stirring inside that contains an unarticulated definiteness. Thank you, Ash, for being our baby. Good night, sweet prince.