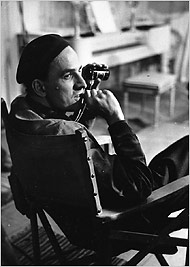 The great Ingmar Bergman, the foremost chronicler of our buried guilt, hate, and neuroses, dies today. The New York Times' Mervyn Rothstein writes: "Mr. Bergman dealt with pain and torment, desire and religion, evil and love; in Mr. Bergman’s films, 'this world is a place where faith is tenuous; communication, elusive; and self-knowledge, illusory,' Michiko Kakutani wrote in The New York Times Magazine in a profile of the director. God is either silent or malevolent; men and women are creatures and prisoners of their desires. For many filmgoers and critics, it was Mr. Bergman more than any other director who in the 1950s brought a new seriousness to film making. 'Bergman was the first to bring metaphysics — religion, death, existentialism — to the screen,' Bertrand Tavernier, the French film director, once said. 'But the best of Bergman is the way he speaks of women, of the relationship between men and women. He’s like a miner digging in search of purity.' In his more than 40 years in the cinema, Mr. Bergman made about 50 films, often focusing on two themes — the relationship between the sexes, and the relationship between mankind and God. Mr. Bergman found in cinema, he wrote in a 1965 essay, 'a language that literally is spoken from soul to soul in expressions that, almost sensuously, escape the restrictive control of the intellect.' In Bergman, the mind is constantly seeking, constantly inquiring, constantly puzzled." More here.