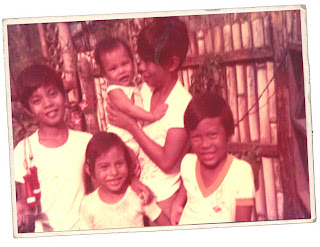 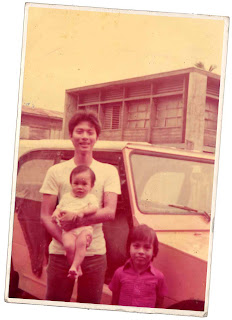 The first old picture shows me with most of my brothers. There are six of us in the family, all boys -- and that's Edwin, Rey, and Dennis in the foreground, with brother Alvin holding me up. I was two? three? And why are we smiling so brightly at the camera? Why does Edwin have a jump rope slung across his shoulders? Sometimes I wish we could all remember everything when we were children. I must have been four or three years old in the second picture, but I certainly already looked like my father. That's my eldest brother Rocky holding me, and my brother Rey -- how little he looks -- at the right side, and we're all posing in front of our almighty yellow Sakbayan (the vehicle of choice then). We're in Bayawan in southern Negros in the late 1970s, during the Gilded Age of Sugar. It's my birthday today, and also my mother's 75th birthday (yes, we share the same birthday), and I'm scanning all old photos now for my tribute to her later this evening. All of these is taking me back...