8:33 PM | Quick! Do You Know Where the Old Casa España District in Dumaguete Is?

Part 4 of the Dumaguete Heritage Series

Quickly now. Do you know where the Old Casa España District in Dumaguete is?

No one now would probably know. Unless you are of a generation that knew Dumaguete from around war time, and more concretely if you came from before that, a place called the Old Casa España District—a name which evokes a particular time and a particular way of life especially in the sugarlandia of Negros—would not be a familiar one.

It is a place forgotten in history, and is perfect testament to the constant erosion of cultural memory. And truth to tell, I wasn’t even aware of the name until some time last year when I read an extended version of Lorna Makil’s article, “The Streets of Dumaguete,” which identified the triangular area near the City Hall bisected by Burgos St. and Tan Pedro Teves St. as the “Old Casa España District,” literally the district of the old Spanish houses. From that article, Makil, a famed sociologist and widow of the great Filipino tenor Elmo Makil, had written of these two streets: “These are two very short thoroughfares that begin at Sta. Catalina Street and end in Rizal Boulevard. On the Dumaguete street map, they almost form the shape of a triangle, with Tan Pedro Teves Street diagonal to and merging with Surban Street near the Boulevard.”

Then she identifies the origins of those street names, recalling notable Dumaguetnons from the past who are ironically also no longer remembered significantly: “Tan Pedro Teves was the Presidente [or the equivalent of mayor] of Dumaguete from 1903 [to] 1907, and then from 1934 [to] 1940. The word ‘Tan’ before his name was a title of respect given to officials of high rank—I suspect perhaps a shortened version of ‘Capitan.’ Don Luis Burgos was a well-known sugar planter whose wife was haciendera Doña Tomasa Gomez from Avila, Spain.”

And then she writes: “The area bounded by these two streets used to be called Old Casa España District, where the homes of wealthy and important Spanish-Filipinos used to be (some of these houses still stand, looking old and neglected now).” 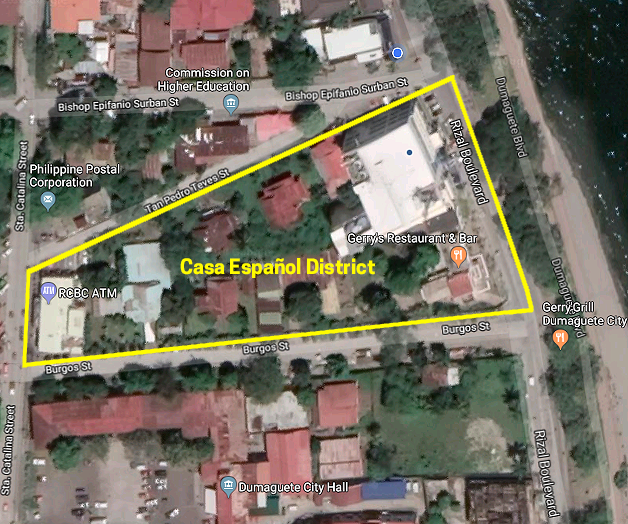 Some of those houses are still there, the best preserved of the lot being the Serafin Teves Mansion, the elegant lady of the block now housing a Gerry’s Grill—of which we are happy to note has withstood the caprices of time and I am sure the temptations of “modernizing,” from being torn down, notwithstanding the glorious place it has in Dumaguete history. [I must say I miss the traditional cobalt green paint it has always boasted—but that’s beside the point.] Then again, Serafin Teves house is of the most recent vintage of all the houses in that block, built in the early decades of the 20th century in the succession of construction of the so-called “sugar houses” along the Boulevard, which became the foremost city homes of the local landed class. This house, residence of Don Serafin Lajato Teves, the governor of the province in 1956-1959, was built in 1936 from designs by architect Julio Victor Rocha, and at its prime had seen a glittering parade of visitors, including presidents [and presidentiables], ambassadors, high-ranking ministers, movie stars, and beauty queens.

Behind the mansion are the older Spanish houses, which today are a series of three lovely wooden houses of the design Oriental Negrense hacenderos mostly favored at the height of their wealth. The best representation of this architecture are those houses around Mojon Church in Bais, in the vicinity of the Central Azucarera de Bais, all of them company houses of the famed sugar mill, founded in 1918, and all still stately in their imposing, if withered, grandness—like abandoned belles in a Southern gothic romance.

The Dumaguete remnants of the Spanish casas along Burgos are a throwback to those glory years, but now obscured literally and metaphorically by abandon and perhaps forgetfulness—but the fact that they are still around in 2019 is a beacon of hope that perhaps some enterprising developer could see the diamond in the rough, and make thorough use of them while still preserving the history embedded in the old wood panels and the exquisite design. (It can be done.)

The preservation of Burgos Street itself—now a bricked pedestrian walk, following City Resolution No. 299 which was approved way back in 2002, which called for its rehabilitation and for its declaration as a pedestrian street—should be taken as a positive step towards that kind of development. Burgos Street is being envisioned as the connecting artery that will ultimately link the two most significant city parks—Paseo de Rizal [or the Rizal Boulevard] and M.L. Quezon Park. Imagine these three points [Rizal-Burgos-Quezon] as one long interconnected pathway for tourists and locals to walk along and consequently enjoy the heritage, and beauty, of Dumaguete.

A “heritage walk,” if you will.

You start with the “pantawan” [constructed in 2017] somewhere at the northern end of Paseo de Rizal, and you go along southwards following the famed walk of the National Hero as he promenaded the shores of Dumaguete in 1896. At the Serafin Teves Mansion turn from Rizal to Burgos, you walk westward, hopefully with the heritage houses of the Old Casa España District finally in restored glory along the Burgos pedestrian walk, perhaps now boasting of cafes and restaurants and shops. The “heritage walk” ends at Quezon Park, perhaps now also fully restored with the monument of Rizal also rehabilitated, and perhaps [finally!] an additional monument constructed for its namesake. [The landscape architect and heritage conservationist Paulo Alcarazen has been consulted by the City with regards the best way a restoration of the park should go. But more on the park in a future installment of this series.] The jewel of this “heritage walk” would be the Old Presidencia itself, formerly the City Hall, soon a satellite of the National Museum of the Philippines, and soon to showcase the best of our local art and culture, as well as our history.

I have actually seen an architectural video rendering of all these—and the promise of its fruition is breathtaking. But I know, given the fickle politics that we have, that it will take time, and will demand as much the strong fortitude of those with a vision to make Dumaguete a vibrant place of heritage. The hope now is for all these to become, soon, a reality we can all enjoy and gladly claim in the name of City of Gentle People.