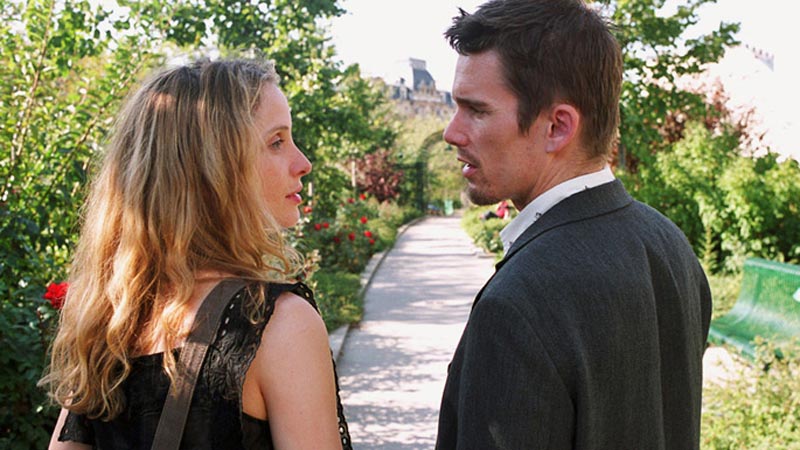 [12th of 100]. The second film from this popular trilogy spoke most to me. And why not? It is a golden hour stroll through the lovely byways of Paris while the two protagonists trip through the trilogy's signature conversation fest, talking about books, art, philosophy, love, life, recriminations, memory, longing. I'm of an age that is well within the neighborhood of Celine's and Jesse's ages, and I've always thought of these films as corollaries to my own life, mirroring my own generation's hopes and frustrations, and of course the kind of love we try to pursue. When they were in Vienna, I was also young and naive and exuberant with my own unfettered youth, thinking of the future as this grand adventure without a map that feels so exciting and endless. [That's the only explanation I can muster why two people in love would not even bother getting each other's last names and contact information before their leavetaking, tossing it all to fate and the future.] When they were in Pylos, Greece, they were no longer so young, and the harsh realities of a lived-in life together have taken their toll on the romance of so long ago. And while I felt their disappointments and recriminations, for the first time in my own relationship with this trilogy, I felt a little distance: unlike them, I am not married, and have no idea what it means to have a relationship when you occupy the same domestic space, with children. When they were in Paris then is my most emotional link to these films: it is a film of the quarter-life years, when youth is at its last bloom, and we have been tempered by life but are still hopeful enough to embark on another grand adventure, even love with the one that got away. The second film strips down the braggadocio of youth in the first film, and without yet the stewing bitterness of the third. If this series was a dance, this film is the glorious ballerina on pointe, reaching out to the lights, standing on tiptoes -- beautifully, precariously. What's the film?