Not too long ago, an exhibit that attempted to be a survey of the Dumaguete visual arts scene made its way from here to Manila, and was bannered under a title that is, in essence, a pejorative.

I don’t want to repeat it here, but it is a word that recalls notions of “backwardness” and the whiff of the provincial—and, more importantly, a word that is almost entirely part of the linguistic arsenal of Manila people in order to distinguish their cosmopolitan selves from the rest of the country. [I have yet to encounter someone from the regions who uses this word for self-definition, unironically. No one really uses it, except Manila people. It’s our own un-problematized N word.]

When I saw that exhibit, I found the choice of that title curious. Was it meant to be an ironic counterpoint? Because so many visual artists from Dumaguete have achieved world-class consideration of their works—Paul Pfeiffer, Kris Ardeña, Cristina Taniguchi, Mark Valenzuela, Maria Taniguchi, Hersley-Ven Casero—some of whom were indeed represented in that exhibit.

Whatever its intentions, the title limned of the source of its framework: that of the outsider curating the local, pronouncing what’s art and not, and giving them a label with a long but unexplored history of privilege and bigotry. [Those curators, to be honest, remain outsiders in the local art scene, having alienated most of them through the years.]

Here comes a group exhibit, however, that feels like an antithesis to that. Its title alone—Atoa—is Binisaya for “ours,” a possessive word of reckoning that signals ownership of place, of self, of artistic expression. Which is exactly how Mr. Casero, who curated the show, wanted it to evince. He wanted a showcase of local artists whose works indelibly say “Ako ni” [or “This is me”], and together becoming a chorus of “Atoa ni.” He wanted a show that would become a reflection of what’s currently brewing among artists in Dumaguete, in a sense providing a snapshot of the “now,” regardless of style, theme, material, or execution.

Most of all, Mr. Casero wanted a show that would unite these artists in the midst of the long epidemic, making of them a chorus of sorts in defiance of all that afflicts us at present. Part of the sweet appeal of the exhibit is finding out that many of the pieces are the artists’ specific responses to the pandemic.

Sometimes it is stark and clear, like in Hemrod Duran’s terracotta representation of the coronavirus, aptly titled “Pandemia 2020”—a solid, visible reckoning of the unseen we fear, and ironically, with this art, bearing a promise of our eventual triumph. 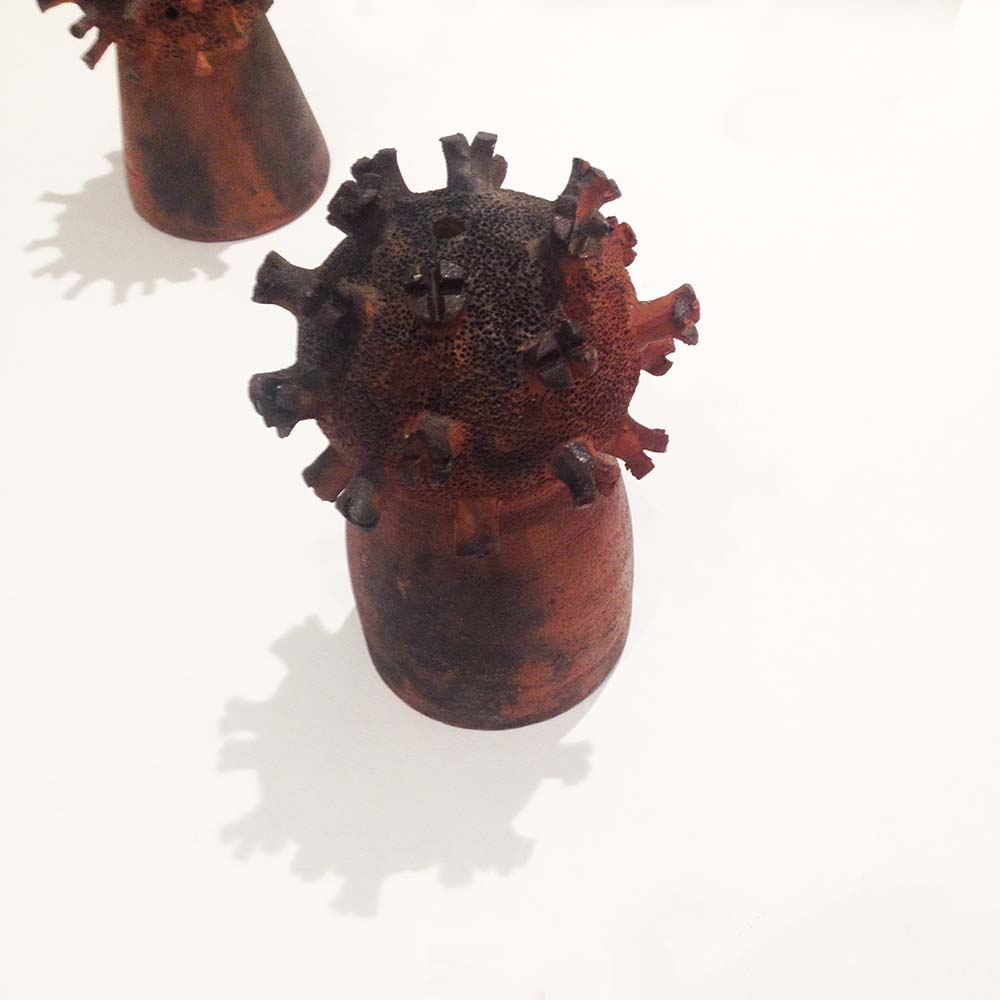 Sometimes, it is subsumed in images that evoke a kind of longing for touch, like in Iris Tirambulo’s miniature work in oil and acrylic, “Lugar Lang Nong.”

Sometimes, it is fleshed out in a slap of metaphor for our days in tribulation, like in Chris Lavina’s “time-sa,” an assemblage in steel, glass, and acrylic that terrifies and fascinates in its industrial abstraction—a steel hexagon casing that encloses a cryptic red button. You will want to push it. And if you would, will apocalypse come?

Sometimes, it is evident in the pursuit of artistic process in the name of banishing lockdown demons, like Jana Jumalon Alano’s “The Myth of Midlife,” a series of works in glazed clay that charm in their variations of shape, color, and function—part of Ms. Alano’s effort to master pottery in the doldrums of 2020, a clean break from her traditional oil paintings. 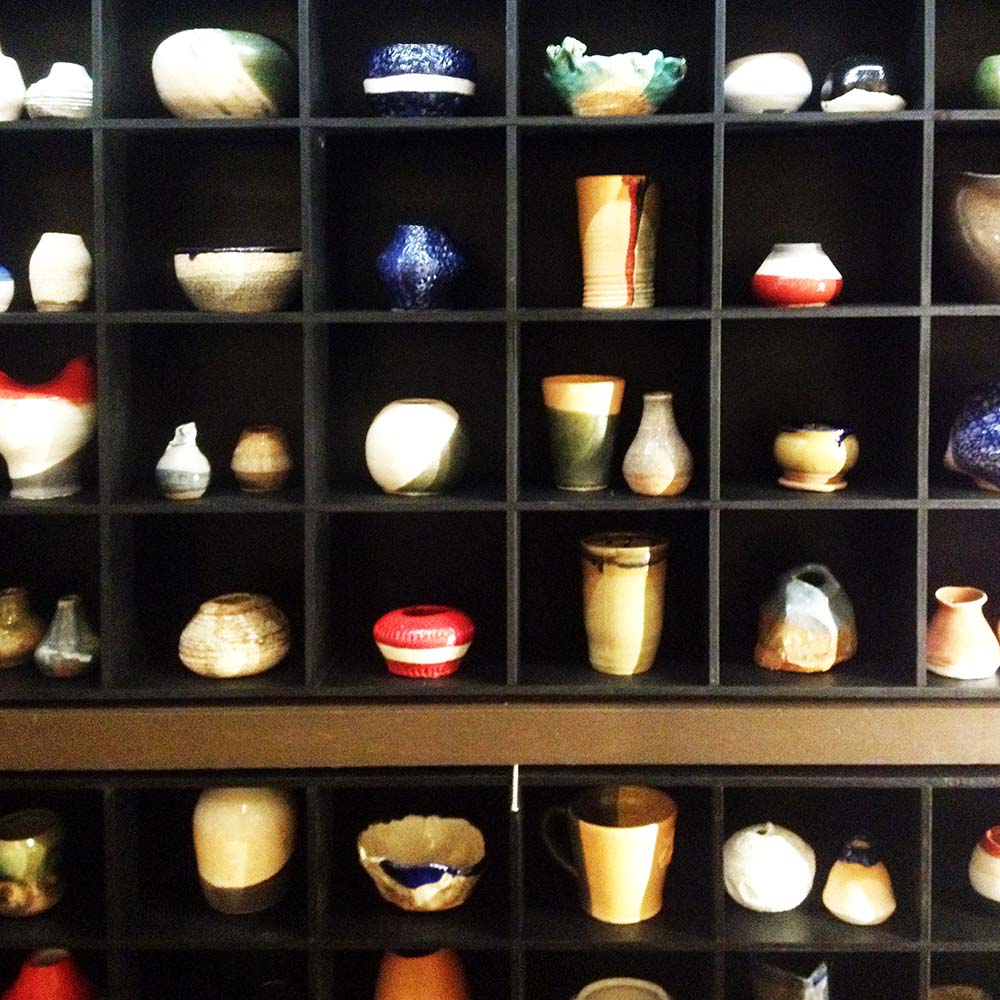 The collective of 36 Dumaguete artists, all represented with at most two pieces, has given us an exhibit that varies in style and media—but for some reason, taken as a whole, they come together in a surprisingly cohesive way, the pieces often in dialogue with each other, if you’re careful enough to observe. You can chalk that up to the particularities with which Mr. Casero has arranged them.

In the little room adjacent to the main gallery hall, for example, Dan Dvran’s sartorial sculpture, “Sisa,” an ensemble in fabric befitting his renown as one of Negros Oriental’s brightest fashion designers and visual artists, blends well beside Skye Benito’s hyperrealistic portraits in oil in circular canvas [I love the nostalgic note of the girl in a blue dress hugging a cat in “Purr More, Hiss Less”]. 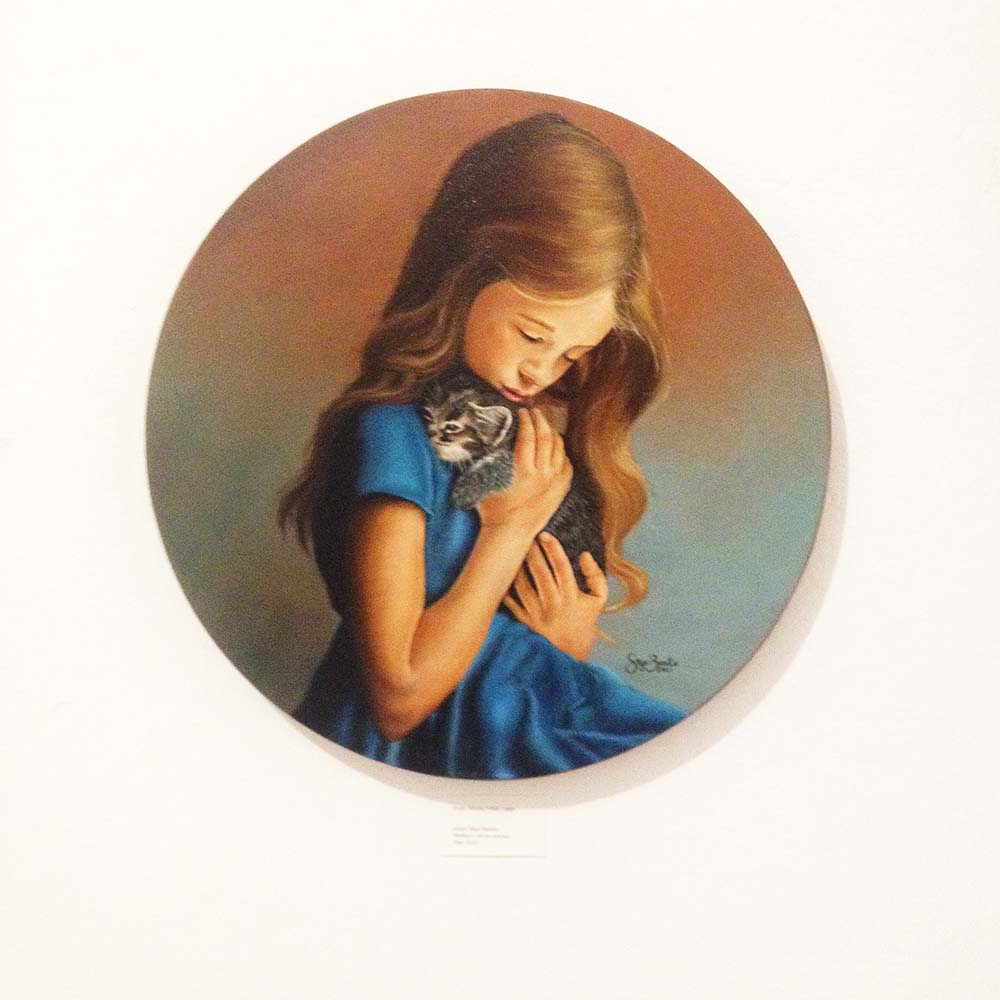 Benito’s hyperrealism, in the meantime, is complemented by the same kind of stylistic flourish in the works of Ramsid Labe, whose works were the first to sell out on opening night. Labe has come a long way from his fledgling days as a Fine Arts student at Silliman University. The playful invention of his plastic sculptural works resembling Transformer-like robots made of ordinary found material from a few years ago has evolved into evocative captures of rural lives, as in his old woman blowing air into kindling to cook a meal over firewood in “Nangantuhoy’ng Kaanyag.” It’s overtly representational work that’s unsentimental in its rendering, and it’s a work that’ truly absorbing. 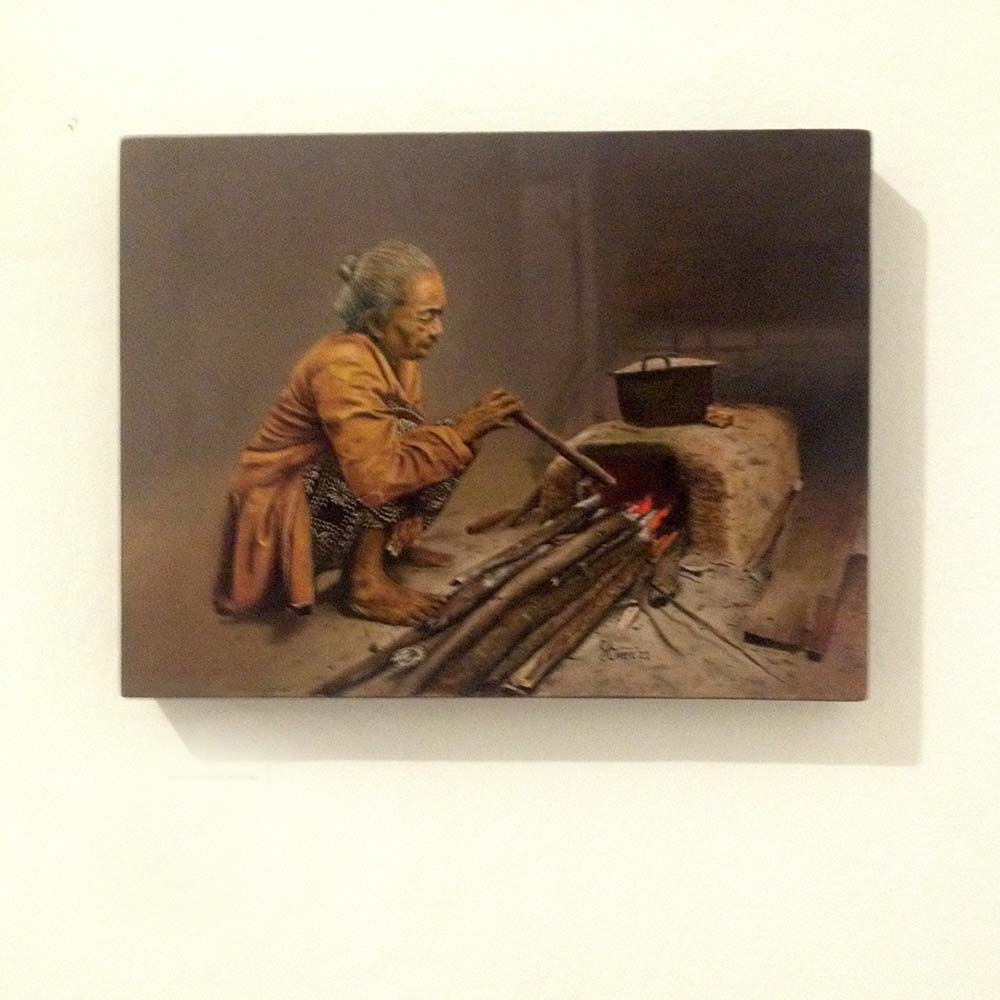 The rest demands time for contemplation. I like the hazy, color-blotched landscape in Sharon Dadang-Rafol’s “Beam of Comfort,” which reminds me somehow of her batik experiments from a long time ago. I like Dyna Fe Quilnet’s sly and sinewy but graceful “Untitled 4” in terracotta and acrylic, a sitting sculpture of a womanly critter with a detachable head. I like Totem Saa’s pair of “Letras y Figuras” paintings and their whimsical architectural leanings. I like Jessica Lupisan’s affecting “OBT [One Big Tuyok]” with its quintessential Dumaguete scene of tartanilla in Rizal Boulevard traffic, done in block, vibrant primary colors—in my opinion her best work so far as I’ve known her art. I like the whirling surreal world in ink of Cil Flores’ “A Glimpse Into the Future.” 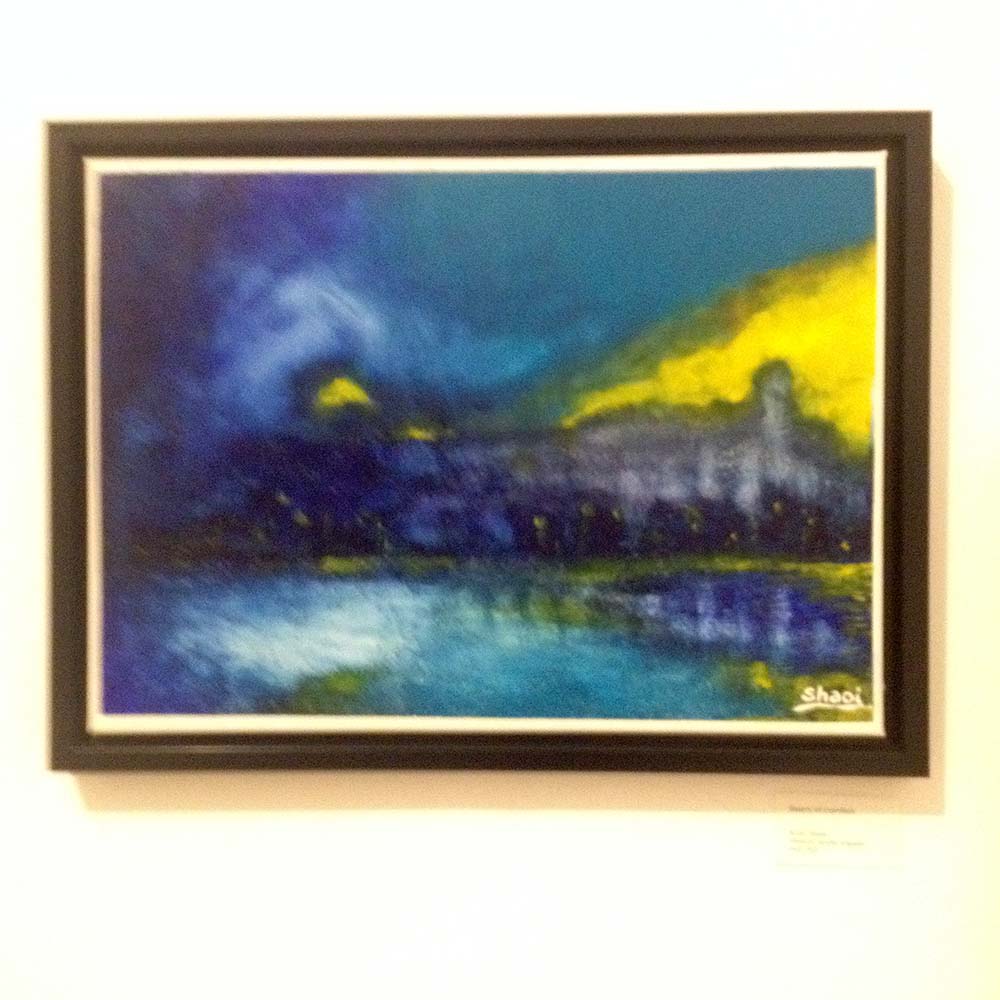 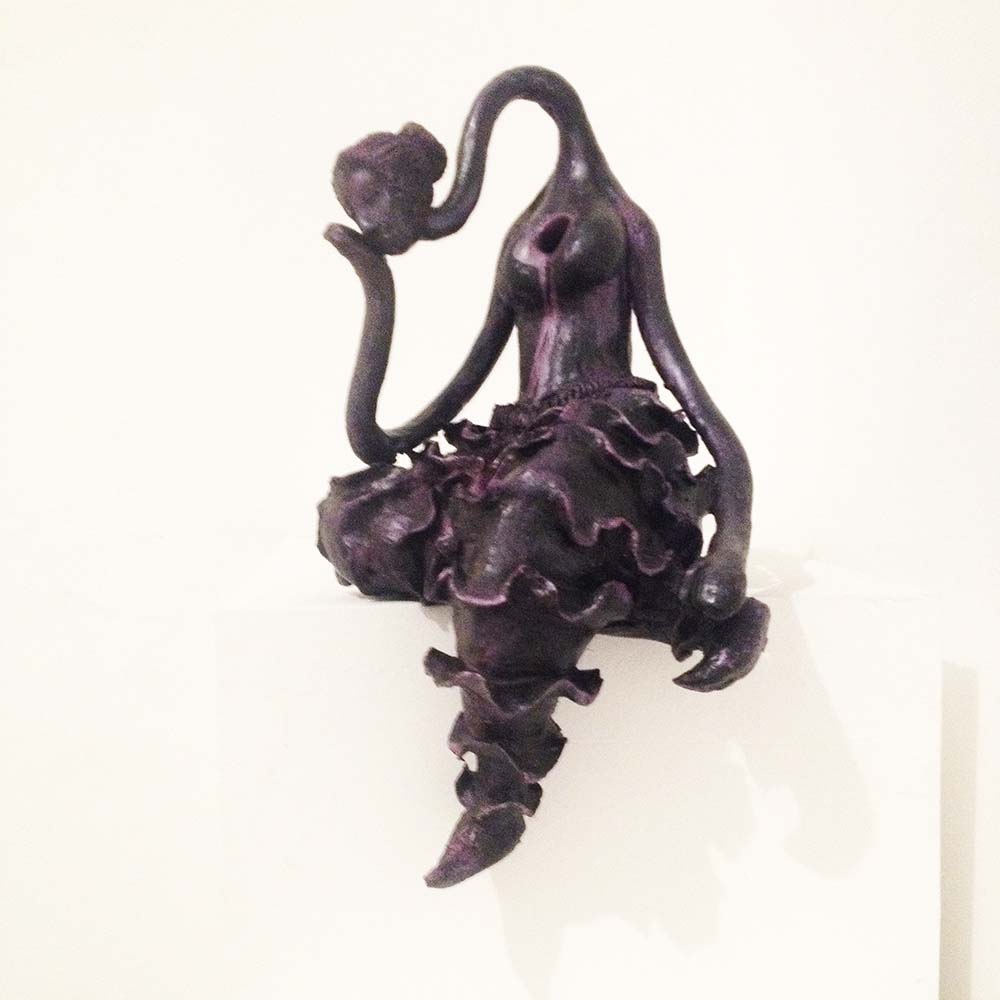 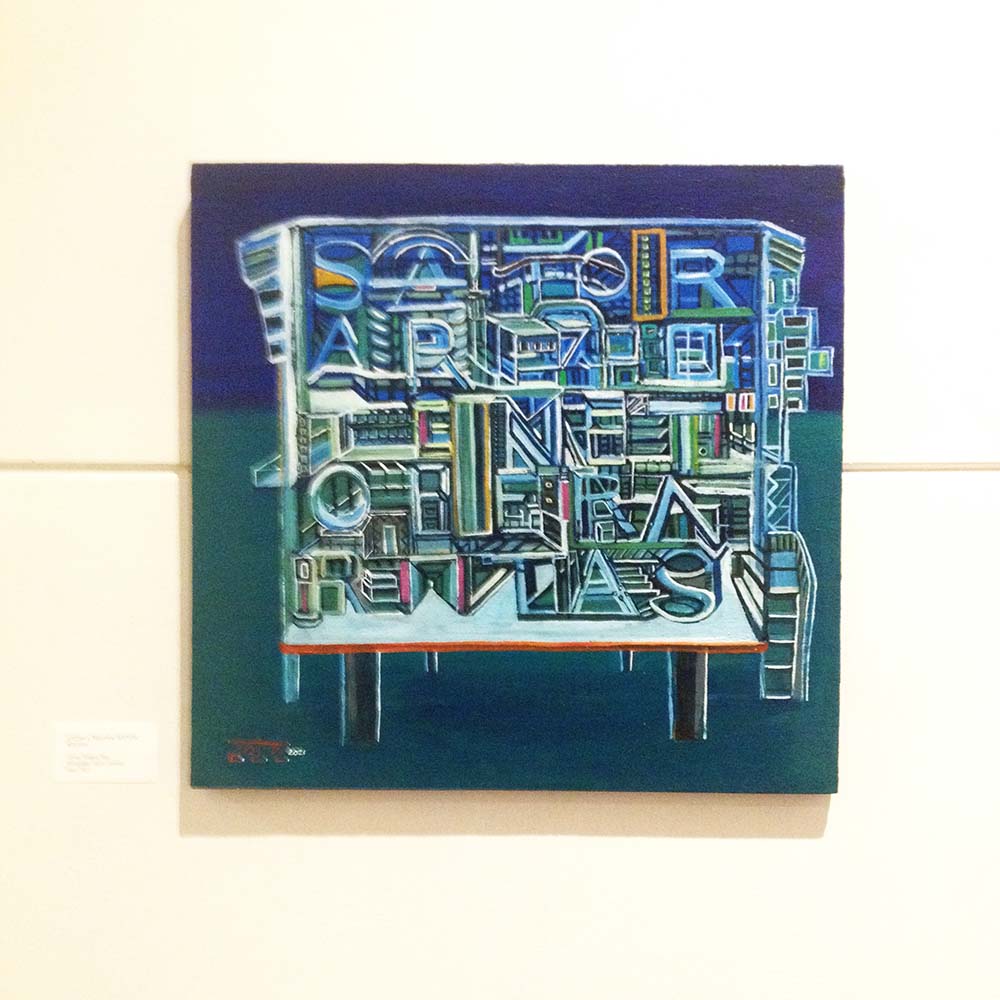 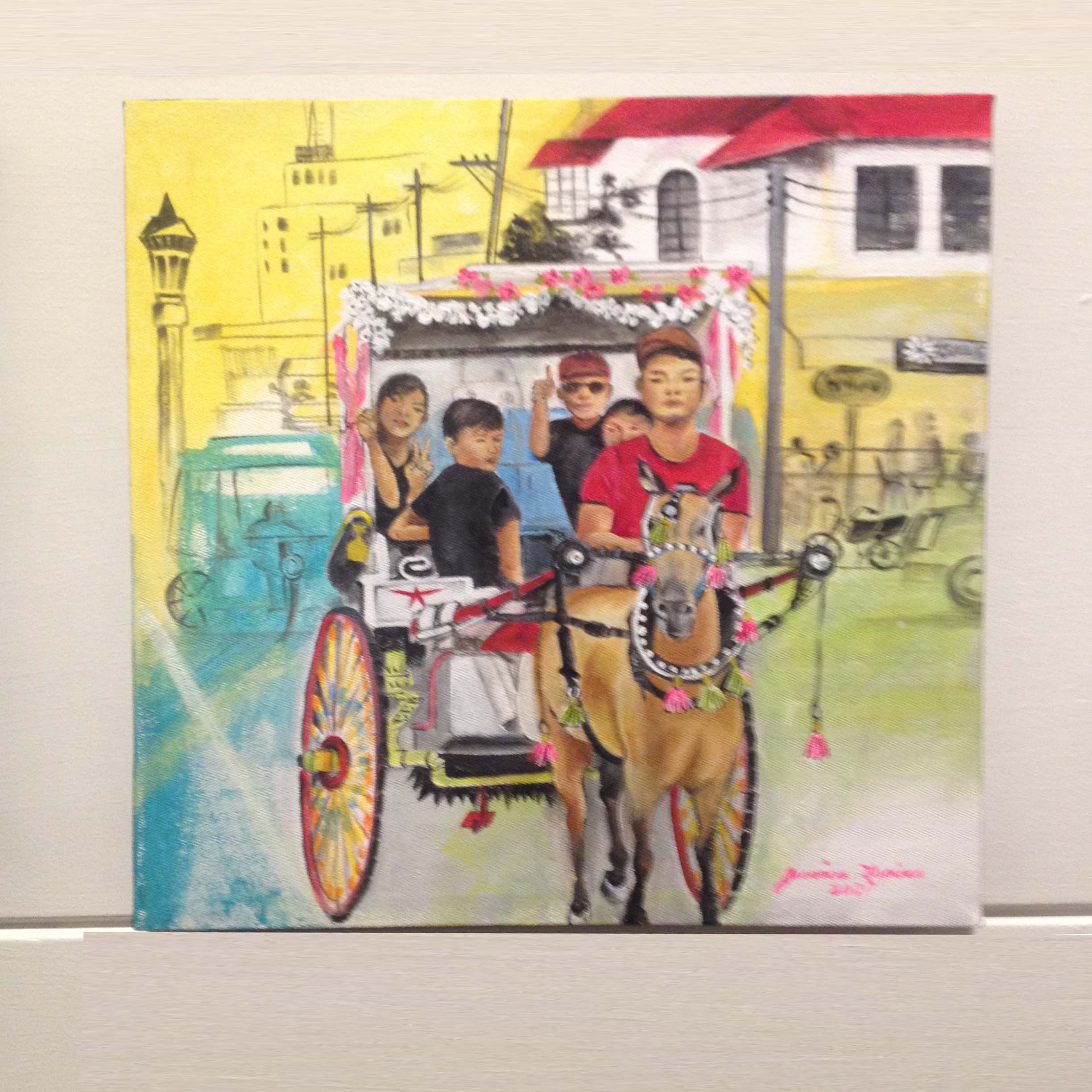 What I like the most are the surprises—when the artists you thought you knew give you works that defy what came before, at least stylistically speaking. I love it.

What has come over Paul Benzi Florendo, for example—now fashioning himself anew as BenFlo—that he has eschewed oil on canvas, and has gone to video and digital painting? New fatherhood, probably, and also becoming a prolific filmmaker—which have probably awakened the experimental in him. In “Happy New Year,” he gives us digital images of various colored doors floating around a man’s face in a mask, and juxtaposes that with footage of his toddler confined within the outlines of that mask. It’s a commentary of fretful parenting in the shadow of the coronavirus. 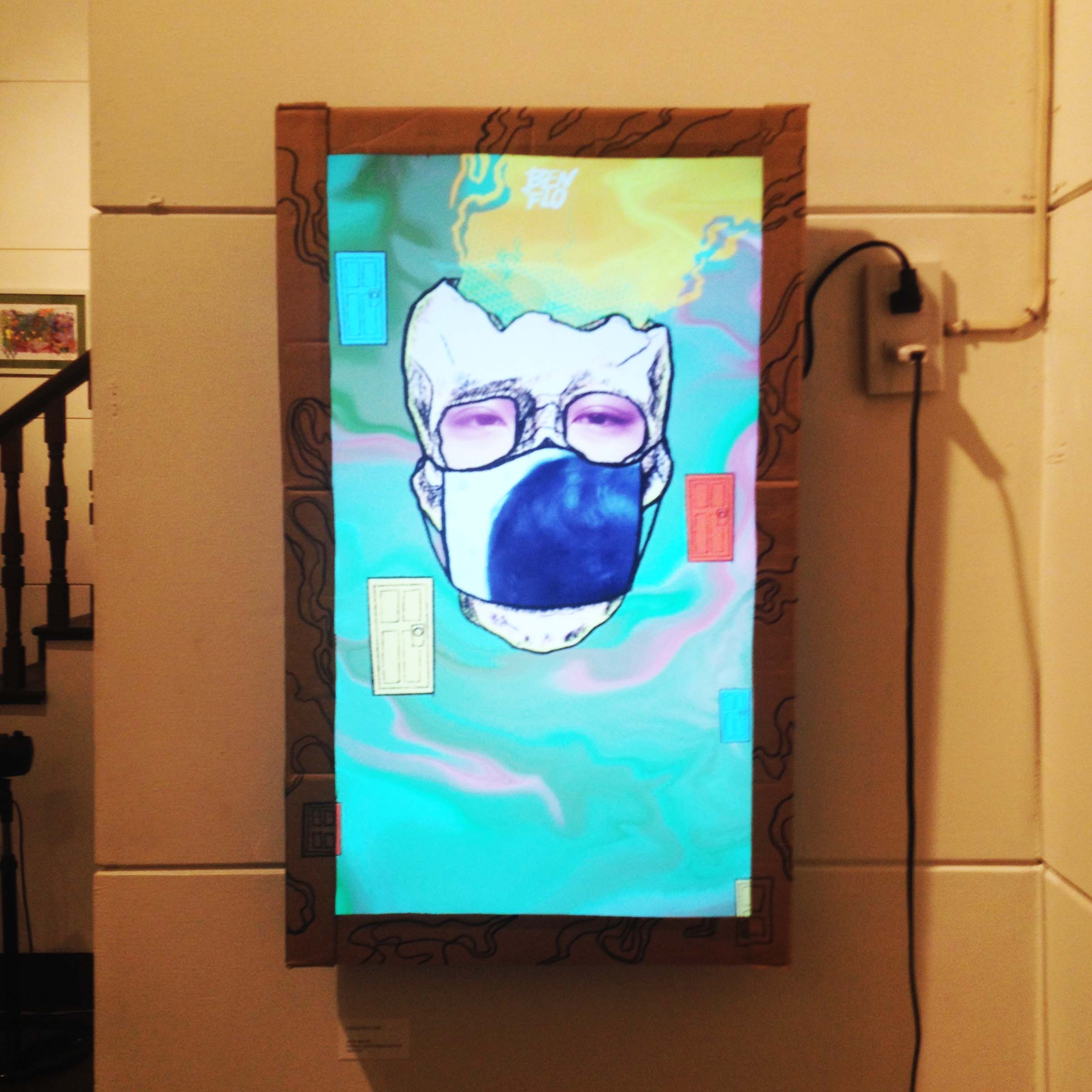 Then there’s the surprise of Mr. Casero himself who’s dipping a little bit into the conceptual with ”Tulo Dos.” Here, he gives us oversized “portraits” of old, out-of-circulation two-peso coins [the ones with the ten sides] and puts them over a jar and racks of assorted candies—from which the viewer is encouraged to pilfer. [I took a White Rabbit.] He has never gone this route before, and I’m delighted at the change of approach. 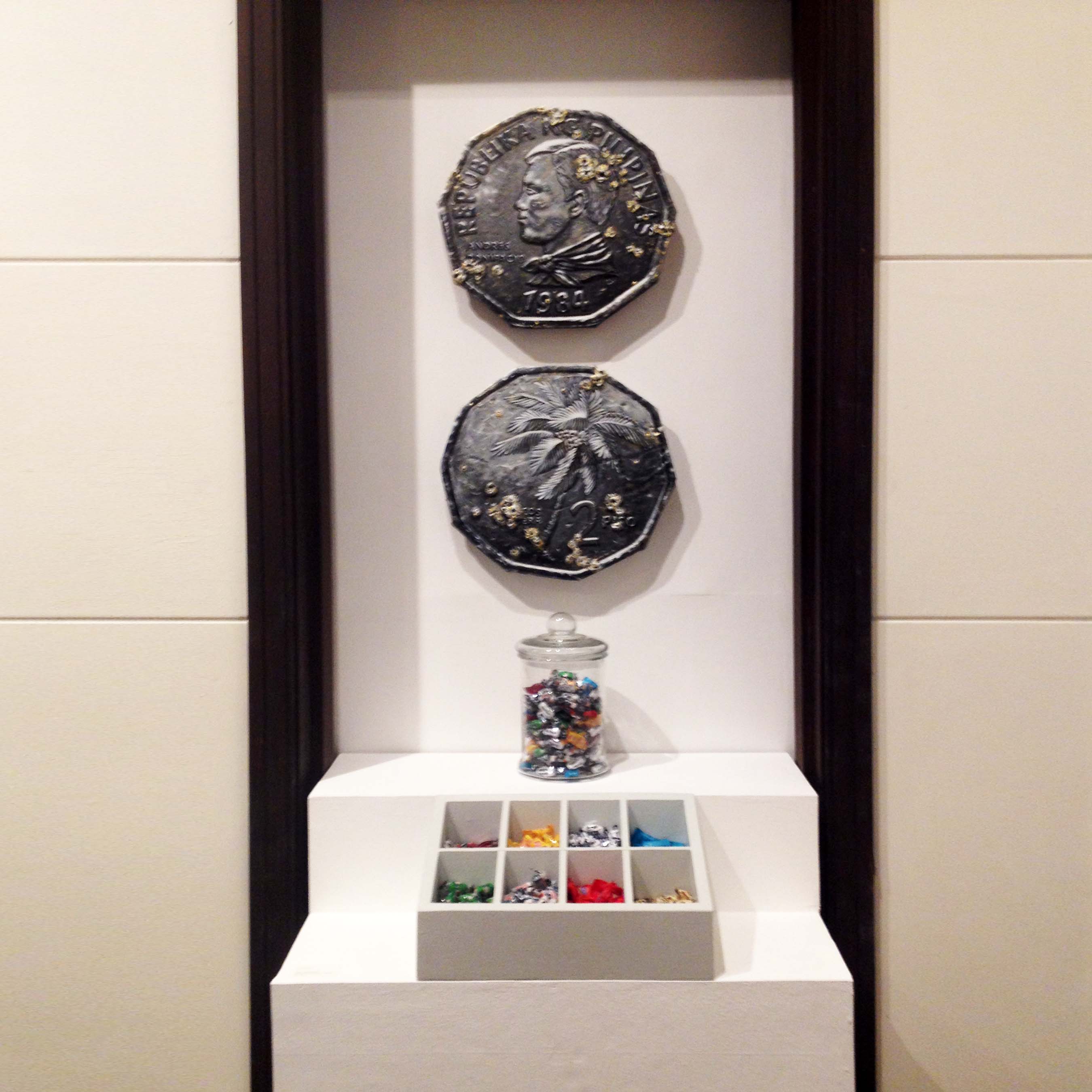 For lack of more column inches for this article, it’s impossible to be comprehensive of all the works [and all the artists] in this exhibit. But that’s also an invitation to see for yourselves the rich variety of contemporary Dumaguete art, now ongoing from February 6 to March 6 at the Dakong Balay Gallery along Rizal Avenue.

They show a collective “atoa,” and with that, a sense of community pride. They herald an excitement for what’s brewing in the local art world. They signify cultural light in our current darkness—Dumaguete still at it for Kisaw, its local celebration of National Arts Month for February. They defy hoary, outside formulations—showing us that Dumaguete artists are at once gloriously local but also very much at home in the world. And definitely not “promdi.”