And now for some respite from the recent tumult.

If there is anything about the pandemic I’ve come to “love”—if love is even the right word for it but perhaps in a silver lining kind of way, it probably is—it is the fact that this norm-busting present has made Dumaguete a veritable food hub.

I’m simply astonished by the rapid growth of the food scene here, with restaurants, cafes, patisseries, and pop-ups seemingly appearing out of the blue, most of them flourishing in what should be very challenging times.

Not that the food scene didn’t suffer. Some of our favorite restaurants—Café Alima among my favorites is foremost in my mind—eventually closed down after trying hard to make it through, even with Food Panda and Grab Food as alternatives. Even franchises, like Harbour City, eventually closed. Some, like Persia, opened during the pandemic, promised to sate our hankering for Middle Eastern fare, but closed down soon after. Some, like Halang-Halang Szechuan Restaurant and Kimstaurant, closed immediately in the heels of lockdown, and never opened again. In their places are something else altogether: the former has now become a buffet restaurant, and the latter is now an e-sabong center. Some venues feel like dices in an endless game of to-be-or-not-to-be: Nom, the beloved restaurant at The Flying Fish Hostel, closed—and then became Sinati in 2021, which closed and then became Bamboo’s Bar & Grill later that year, which also closed. Now it’s Palmitas.

I can only imagine what led the proprietors of these places to come to that difficult decision of closing up shop. My friend Iris Armogenia who owned and managed Café Alima actually seemed happier after the fact: “It was a weight off my shoulders,” she would later tell me. “Now I’m happier just doing my art and being a painter.”

In the middle of 2021, feeling the pinch of a pandemic that did not seem to end, a group of local chefs and restaurateurs, led by Adamo’s Edison Monte de Ramos Manuel, formed a collective called Dug-ab, which tried to foster culinary events hoping to jumpstart the food scene once again. The hope was to reassure Dumagueteños that great food could still be had. And that their continued patronage was essential.

In the meantime, our collective seclusion for quarantine purposes began to lead to other things. Perhaps we could not stay idle for much too long, and so many of us found ourselves becoming plantitos and plantitas, among other things. Many of us also started cooking and baking—and then selling what we had in the relative safety of our front yards and sidewalks. Fruit and vegetable stands began sprouting all over Dumaguete—and satellite markets even began to flourish.

This is my explanation for the almost paradoxical renaissance of culinary culture in Dumaguete. We turned to cooking and baking to pass the relentless march of idle time, and finding out that we can actually monetize this newly-found passion probably led to this boomlet of food places. Plus, this is a given: people will always be hungry, and people will always want to eat, even, and especially during, a pandemic.

The new restaurants and cafes and pop-ups that we have now do cater to a wide variety of tastes and culinary preferences—and most of them seem to have no lack for patrons. Every Sunday, for example, we’ve been attempting for the past two years to try out every new eating place that has opened, and as of writing we have not yet come to the end of our list. It feels almost like an impossibility, running out of new places to try. Not all of them have been good—I prefer not mentioning these places in articles like these—but many have become a pleasant surprise.

There are, of course, the high-end new restaurants like Beyond Plants, Sakura, Unknwn Kitchen, Arbour, the restaurants at The Henry Resort, and franchises like Pancake House, among others. But the food phenomenon I love is of the pop-up variety.

They’re mostly DIY operations, with humble kitchens and serving areas [some of them are food trucks!]—but what they lack in polish and brick-and-mortar presence they make up for in creative flair and incredible food that will leave you hungry for more.

You want sandwiches overladen with barbecued meat? Go to Pan-Q Dumaguete [now serving you along Hibbard Avenue in Tubod, plus a new branch along Escaño Drive].

You want meat and vegan smoked burgers? Go to Smokes [now serving you along Flores Avenue outside of Hayahay].

You want coffee after a morning run? Go to Joe’s Kapehan [serving you most mornings along Rizal Avenue].

A few nights ago, we finally tried out Mang Kaloy Fried Rice and Tejeros Ice Cream House, both along Escaño Drive. They’re basically housed, side by side, in makeshift roadside bamboo-and-wood shacks, but I love the bohemian feel of both. Their down-to-earth looks are very much part of the appeal, and I was even scared that eventual success might lead the proprietors to seek sleeker venues—and loss that original charm. [This has happened many times before with a few Dumaguete restaurants and cafés. They upscaled, and subsequently lost their erstwhile loyal patrons. But let’s not mention names.]

We didn’t even plan to have dinner at Escaño. We were merely passing by for a brief OBT before heading home—but the shacks captured our attention, and we found ourselves parking by the seaside and joined the small throng that jostled for seats. 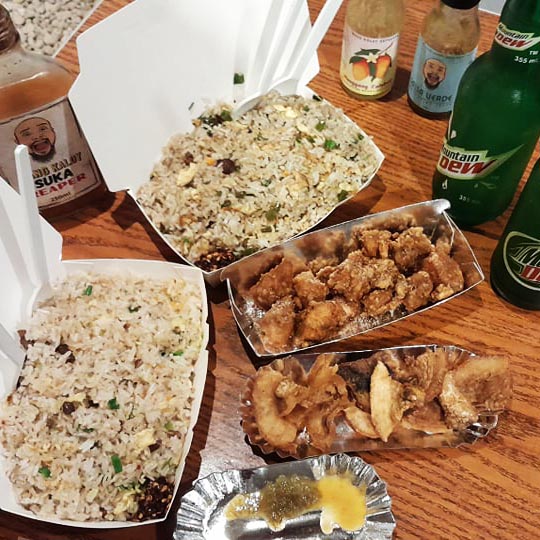 Mang Kaloy, which opened only last January 2022, which had initial success selling various kinds of homemade hot sauces—our favorite is the manggang kalabaw— parlayed all that into something else entirely: selling a whole gamut of fried rice specials on their menu.

Who doesn’t like fried rice and its immediate evocation of comfort?

What a concept, which intrigues all the more for its utmost simplicity. And as the core of a business, it’s a product that’s fast to do, can be offered on the cheap, and can readily be transformed to something else pricier with extra toppings and certain specials. Their basic offerings include plain fried rice, chicken fried rice, and pork fried rice. From that base, it’s easy to go crazy with toppings.

For our initial meal, we had the wok-fried rice of two varieties: pork and chicken—complete with two toppings: deep-fried pork belly and Taiwanese popcorn chicken. It was delicious, and takes me back to Saturdays in childhood when mother would take what was left of rice from preceding mealtimes and transform them into a concoction thinly sliced meat and aromatic spices.

What we had was the kind of filling that leaves one completely sated, and happy. It was comfort. It was escape from all the troubles in the world—a temporary one, of course, but I’m here for it. If food is an answer to our contentious times, wok-fried rice gets star billing.

For dessert, we went next door to Tejeros. They opened their stand only last September 2021, although they’ve been selling ice cream on an order-only basis for the past ten years. We had their regular fare of sugar cones generously laden with mango and vanilla-with-chocolate-chips ice cream. A perfect ender to our fried rice dinner.

I love culinary delights, and I love discovering them. I hope though that these places last, and that they don’t change. At least not by much. They’ve given us much joy during the pandemic, and I’d like to see them bustling still in the post-pandemic future.


[This is a longer version of a previous post.]