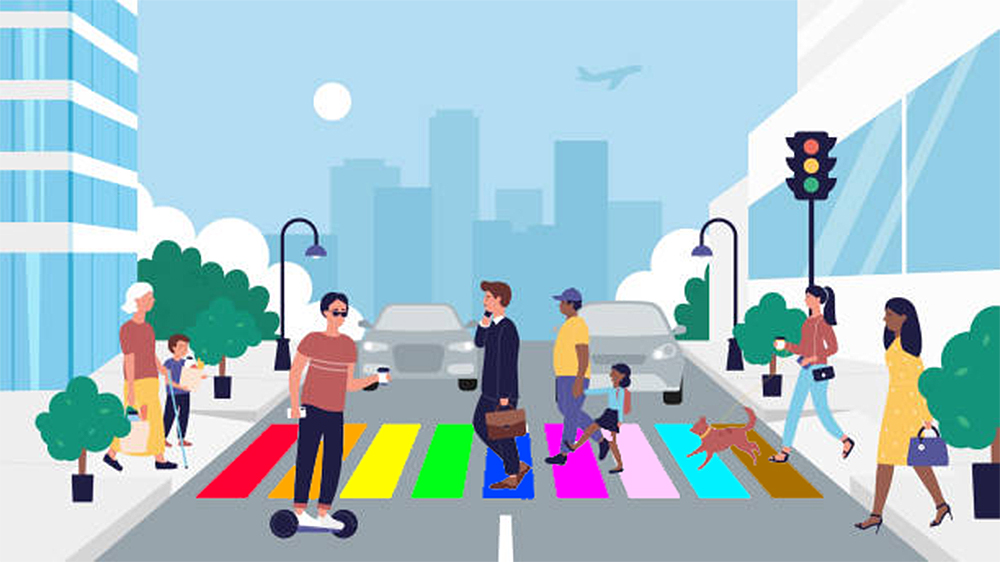 It has been a while—two long years of pandemic restrictions, in fact—since we last celebrated Pride Month in Dumaguete. And like a phoenix whose fiery resurrection is done up in all the colors of the spectrum, we’re back! Albeit in more intimate considerations, given protocols we need to follow for the pandemic we are still living in. And when I say, we’re back, I mean this: all I can see right now is a vision of a Dumaguete pedestrian lane done up in all the colors of the rainbow.

Why this vision of a local pedestrian lane in these colors? I was asked this question by local journalist and friend Judy Flores.

Rendering a Dumaguete pedestrian lane in rainbow colors is a very visible way to signify support, especially by the LGU, to the concerns and welfare of its LGBTQ constituents.

Imagine a city street painted in the colors of the rainbow! It will be immediately recognizable, it will probably becoming Instagrammable—and it will be a testament to the city’s pledge to welcome diversity of all kinds and to promote inclusivity, especially with regards sexual orientation or gender identity.

A rainbow pedestrian lane project, which has been done in many progressive cities all over the world (and notably Manila, Mandaue City, and Quezon City in recent years), is a dream. Dumaguete joining their ranks will be significant.

We actually started doing Pride in Dumaguete in 2011, but not on Pride Month! I still remember this well. It was in December, and a bunch of us were invited by the Dumaguete City Health Office to make an LGBTQ contingent for their World AIDS Day parade. We took the invitation, and ran with it—and made our contingent “the first gay pride parade” in Dumaguete City. I remember walking the streets of Dumaguete in that parade, making myself visible for the first time in that capacity. It was tremendous and terrifying all at once—but there was a celebratory feel to that parade in 2011 that will forever remain etched in my best memories. I remember walking along Real Street in the public market area and heading towards Freedom Park, and seeing someone from the top floor of one of those old Art Deco buildings waving a rainbow flag. It was an elderly woman, although we could not see her face. We waved back. Was that her way of saying, “I’m part of this parade, too!” and “I’m making myself visible this way”?

There were a couple more Pride Parades after that, but nothing big and nothing really memorable. I can’t even find pictures of them. One in particular [was that in 2014?] just encircled Silliman campus, starting from the West Quadrangle fronting Silliman Church and ending at the Silliman Ballfield. In 2016, however, we had a bigger one, and this entailed an entire city tour. But it was held in July. In 2017, we had an even bigger one, led by Sol De Castro. But it was held in August.

And for the most part, Pride just meant parades.

In 2018, I volunteered to become the lead coordinator, and I wanted to expand the scope of Pride in Dumaguete to not just be about parades, but be a month of celebrating LGBTQ life with various events, including a drag show, a film screening, several fora on important issues, a poetry reading, an athletic gig, among others. We christened the event—which we hoped to be an annual occurrence actually held on Pride Month—“6200 Pride,” after our zip code.

But there was a personal reason why I volunteered: I was especially moved by an incident that horrified me. A good friend—a very talented dancer—had recently died of AIDS in Dumaguete, and his family was particularly horrible in their treatment of him in his last days—denying to everyone that he had the disease, denying him visitations by friends, and denying him the proper medical care that should have been given to him. I was so furious I decided to make Pride Month 2018 an extensive celebration of the LGBTQ, with particular focus on HIV/AIDS. [We had a seminar, and we offered free testing!—all courtesy of the Silliman University Medical Center and an organization of medical students.]

The last Pride Month we actually celebrated was in 2019, led by Shamah Bulangis. We had no idea it was going to be the last for a good while.

For 2022, coming off the pandemic, we are back and our goal is to highlight the mental health of LGBTQ people. Statistics show that LGQBTQ youth are most vulnerable to depression and suicide because they lack the necessary support they need in dealing with their sexuality, especially in a society that still condemns it. We can’t have more dead gay youths. We can’t have more people suffering from depression and anxiety just because they feel unloved or unwanted. (Or worse, bullied.) This is our focus for this year.

6200 Pride is not really an organization. It is more of an umbrella that coordinates various organizations, and helps facilitate their activities for Pride Month. It has always been a loose movement composed of a ragtag bunch of friends and volunteers who believe in the issues of the LGBTQ community. Under this umbrella organization, we have PETALS Dumaguete, headed by NORSU’s Carlou Bernaldez, which is the LGU-recognized LGBTQ group in Dumaguete. We also have Silliman University’s Illuminates of the Spectra [or iSpec], the school’s latest LGBTQ organization. But 6200 Pride also includes other groups that are allies of the cause. For 2022, an organization called Humanist Alliance Philippines, International [HAPI] is doing their share of Pride Month events—including art exhibits and various talks.

In the meantime, 6200 Pride is pushing—indeed, pushing!—for that rainbow pedestrian lane. We also have a writing contest that invites local LGBTQ to talk about their experiences as queer people. We also have a screening of the films of Jay Altarejos, a forum on civil unions with Jesus Falcis, another forum on mental with Bing Valbuena, a community reading project focusing on Carlo Vergara’s iconic graphic novel Ang Kagila-gilalas na Pakikipagsapalaran ni Zsazsa Zaturnnah, a staged reading of Dean Francis Alfar’s Short Time with YATTA, and a Pride PechaKucha where we will talk—in that unique brand of fast presentation—about drag, about writing queer stories, about coming out [or not], about partying, about queer art, about trans life, and about queerness in Filipino pre-colonial society. [For more information about the schedule of events, please look up 6200 Pride on Facebook.]

It should be a fun June.

I’ve been asked before: what rights are you fighting for in Dumaguete and Negros Oriental? There are so many issues that concern the LGBTQ community in the Philippines, among them the possibility of recognizing civil unions, the management of the HIV/AIDS epidemic, the mental health welfare of gay youths, among others. The fight to make things like this happen will be long, but talking about them in the community will be a good start—and this is where Pride Month is essential.

People tend to say that the Philippines is more tolerant of its LGBTQ citizens, so why are we still doing Pride? But we still face discrimination in the workplace and in the family, among other things. And often this discrimination is not overt. Trans people, for example, are still being denied the rightful expression of their identity in many functions, like graduation, and are discriminated against in terms of opportunities in the workplace. Pride is about bringing attention to these things, but it is also a celebration of how much we’ve come so far in this fight.

We do get pushbacks when we push the envelope further in the name of acceptance and diversity. Sometimes we ask: are we effective in sending out a clear message? And sometimes we ask: are our own members of the community even hearing us clearly? The Dumaguete LGBTQ is a very particular community for me when I come to regard the whole thrust of Pride Month—because while we do get active participation by a very middle-class and very young demographic [mostly students and professionals], we are still actually courting the participation of those who are in the other classes, particularly the working class LGBTQ who work in beauty parlors, who do pageants, and others. They have shown some reluctance in joining our cause for so long, and I’ve always wondered why. Is Pride Month too burgis? I want to tell them that our fight benefits them in the long run, and that it is essential to join hands to show solidarity in this clamor for visibility, for our rights, and for our welfare.

In the end, beyond rainbow pedestrian lanes, I envision a Dumaguete that welcomes all to the City of Gentle People, regardless of sexual orientation or gender identity. Because in a world that values diversity of all kinds, it is best to promote inclusivity. This means extending support to efforts, like 6200 Pride and similar activities, that promote the rights and welfare of a very marginalized sector of society who has historically been vulnerable to prejudice.