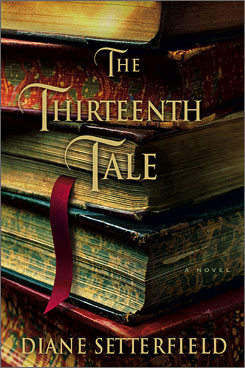 I'm reading Diane Setterfield's very beautiful The Thirteenth Tale. It takes me back to boyhood days when I first discovered the orgasmic pleasure of reading, and combed the shelves of the old library looking for Jane Eyre and Wuthering Heights and Rebecca. The book is, at heart, a romance on writing and reading, and has an enigmatic figure of mystery in its center, the writer Vida Winter, who spouts off the most elegant observations, such as,

Politeness. Now there's a poor man's virtue if ever there was one. What's so admirable about inoffensiveness, I should like to know. After all, it's easily achieved. One needs no particular talent to be polite. On the contrary, being nice is what's left when you've failed at everything else. People with ambition don't give a damn what other people think about them. I hardly suppose Wagner lost sleep worrying whether he'd hurt someone's feelings. But then he was a genius.

Strangely, I'm taking my time finishing the book. I don't want to finish it. I want to savor it. And the above quote about politeness? A perfect prescription for my life right now. I'm too polite, too eager to please too many people. Enough already. (God, I wish I could go public about this. Let's just say one has work problems, and sometimes one wishes some people a kind of vanishing. Into oblivion. Where they belong.)