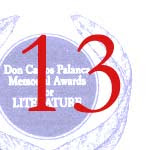 People always email me this question: "Where can we read the Palanca-winning pieces?" In Literatura, I tell them. It's an online literary magazine I started a few years back (when I had so much more free time than I have right now), which had regularly featured many of the winning pieces, particularly from the past three years. I've been remiss trying to come up with monthly issues as I had promised before, but the annual Palanca Issue is always one that I don't miss out on. (Last year, when I almost didn't plan to come up with one, the writer Ed Maranan nevertheless sent me his winning essay and maikling kuwento, which spurred me to ask the rest to send in their own. That became Issue No. 12.)

So watch for the thirteenth issue of the long dormant (