I know I've been remiss in my blogging (and bloghopping) when I seem to have missed out on the many raging controversies in "Philippine blogosphere" -- God, how I hate that term. It must be the strange weather we're having lately, but everybody seems particularly irritated. And some for good reason. There's, of course, Gibbs ranting about the growing cliques and their sense of entitlement in the local blogging world (which made me think: I've been blogging since 2003, and I kinda miss the innocence of those days. Today, it's all about Awards this, and GoogleAds that, it all makes your head spin.) But there's something else I have missed out on... This is vile Malu Fernandez and her matapobre mouth, probably the most hated woman in Philippine blogging today. (In her Friendster account, she describes herself as a "super bitch but with a heart of gold .... hahaha sometimes i'm not what I seem to be oooh thats a double edged sword...") She writes a social column in People Asia Magazine, and thinks she has the wit of Libby Gelman-Wexler when in all actuality she has the talent and the dimness of a Paris Hilton on a bad day. And she looks like a runaway lechon dressed up in fake designer clothes to boot. What she has done is approach Tim Yap notoriety of pa-sosyal viciousness without even the whiff of flair Tim has. See the offending instance via Tingog.com here and here, and see the debate in Manolo's blog here, and countless other blogs too many to even begin to consider and link. Better yet, I'm posting the pages of the notorious article below (click to enlarge): 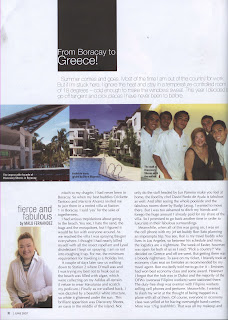 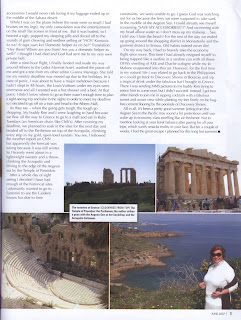 Read her article and feel your blood pressure rise. But what really riled me up -- and prompted me to post this -- is her devil-may-care response to the blogging barrage:

As I type this, I’d like you to know that it’s not about whining, complaining and bitching but just stating the facts. Just recently, I wrote a funny article in my magazine column and my friends thought it was hilarious. It was humorous and quite tongue-in-cheek, or at least I thought so, until the magazine got a few e-mails from people who didn’t get the meaning of my acerbic wit. The bottom line was just that I had offended the reader’s socioeconomic background. If any of these people actually read anything thicker then a magazine they would find it very funny. Most people don’t get the fact that they need bitches like me to shake up their world, otherwise their lives would be boring and mediocre. I obviously write for the a certain target audience and if what I write offends you, just stop reading.

Well, dear, I've read books thicker than triple your waistline, and I know what is satiric and what is ironic and what is acerbic and what is tongue-in-cheek. You're neither all of these. Your silly article is still nothing more to most cultured people than a moronic attempt at column-writing by a bored social climber who is trying to assuage her insecurity because no amount of reading French Women Don't Get Fat can ever get her to lose the love handles on her face.

I say Cat is right: fire her. She is a waste of ink and paper.

What a pot roast.

[Note: The viciousness above should be taken as something like giving her a dose of her own medicine. She needs it, man.]