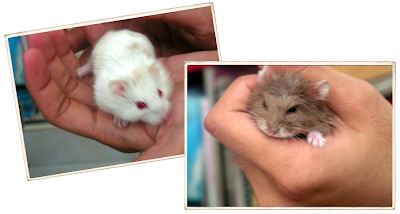 There are two reasons to smile these days. Meet my new hamsters Cream (at the left) and Coffee. Pets are great therapy, and by God I need something to soothe my frayed nerves these days.

My life's a mess, although if you look at me now, you will think that I look like I'm in control -- but that's a facade that fool so many people. I'm really, really good at bottling things inside -- but when the volcano has to burst, you will see me as the very illustration of dejection. And it takes me a long time to recover. That's in my nature. I try to fight it, but I tend to really wallow in my sadness. The problem is, my struggle is subtle, and nobody sees anything wrong at all. They still see me as somebody who laughs, who works hard, who smiles a lot, who can carry on good conversation. They don't know anything.

Let's start with something minor. Do you know what they say about "honesty being the best policy"? Bullshit. Tell people what you really think ("I insist," they would say) -- and you evoke drama of the direst kind. These days, I find myself living on tiptoes. Or on the edge of constant disappointment. It's not a nice way to live.

I think the first crack in my armor was when I was assigned many weeks ago to do this freelance thing and I had to travel -- only to be told much, much later that all my expenses (except for food) will not be reimbursed. What? I told myself. I never did get around to finishing that project. Hey, you don't take care of me, so here's air, I shrugged. I had no idea that that would be the start of my current and prolonged season of disappointment.

The start of the current semester was the first major blow. I just came off a hectic -- but beautiful -- May. I did so many, many things that month (I traveled a lot even!), and was pleasantly surprised by what I could do given all that stress and restricted time. And then, we had a faculty meeting, and I was basically "accused" of something that was actually positive to begin with, and if there was any negative side to it, the fault was with somebody who did not do anything about it when we had the time. I know I'm not making sense here...

But let's just say, without being too specific about anything, that I drafted some plans for an important event, submitted it for approval (which never came), waited for official action from the top (which never came), was told to preside meetings and shared plans about the event(where nobody really listened to what was being discussed), and managed to pull off the event despite everything. I had prophetically told a friend four or five months ago: "Pusta ta, nobody's giving anybody the go-signal. Mag-panic lagi ta ani, and in the final analysis, it will be me who will be scrambling to fill the void, and it will also be my head they will offer to the chopping block at the end of everything."

How true that was.

In that meeting, I was basically reprimanded that I did not share the plans for the events at all. (I wanted to shout: But I tried to! I gave the plans, but nobody read it! Or approved it! And nobody came to the scheduled meetings! And when we had those last minute meetings, nobody listened! But I did not say anything. I couldn't.) My world crashed, I think, that afternoon. I knew how hard I worked last May -- I did not even get any sleep. And the hard work was telling in the fact that with those duties officially assigned to me, all of them went off without a hitch, and even exceeded expectations. I was later told that the positive items highlighted by the participants in their final evaluation were all for events handled by me.

I cannot reconcile that with this image of myself in that meeting: somebody reduced to tears and accusations. That was the first time I ever cried in a meeting. Something died in me that day: the drive to do something good. I told myself: Hey, you try to do something good, you get crucified.

The stake to my heart was driven even deeper when friends whom I trusted gave me extra drama that I did not need in my life then and now. (Only to be glibly retorted to by one with something like, "Drama is good! Embrace drama!") I fumed. There were also friends whom I asked to help me out. They gave me promises -- but bailed out in the end, giving me only excuses. I accepted their reasons with just a shrug, but I silently told myself, Hey, I'm not trying to count anything here, but what happened to those time when you asked for help, and I came to do your bidding? And now I ask for your help, and you give me excuses? One of them had the temerity to say, "The problem with you, Ian, is that you don't delegate." I just smiled, but inside I was shouting: Delegate? I do delegate! I delegated something to you, didn't I? And look at what you're doing to me! You're excusing yourself at the last fucking minute! Of course, I don't say anything.

The betrayal of friends, I think, can run deep. I've always had a personal policy of saying "yes" to everything people ask me, especially those whom I consider my truest friends. So when they abandon you, it hurts.

I learned so much about myself and about life last summer. These day, I find myself slowly crumbling inside. I can't help but shake the feeling that too many people are taking small bites out of me with their demands and what-not. I'm passionate about many things, and given the right environment and support, I am a dynamo.

Some time ago, this was the eve of my brother's departure back to Switzerland, I broke down -- in the middle of the Boulevard -- when another minor crisis hit and I managed to shout what was always in my head: "I'm tired of pleasing everybody! I'm tired of saying yes all the time because I don't want to hurt anybody's feelings!" Because I really am. I barely sleep these days because too many people expect too many things of me.

Right now, I'm finishing my MA and teaching with an overload and currently in the process of revising my syllabi for three major subjects, and so when people text or write me something like, "Buti pa si ___, you have time for him, and with me you don't" (an actual text message I received at 2:30 in the morning while I was trying to finish my workbook for research writing), I want to shout: I'm trying to do the best I can to accommodate everybody! It's hard. Time flies by so fast, and soon another day is gone, and I find myself scrambling to finish things.

To top it all off: Somebody stole my cellphone.

I just wish people were generally magnanimous and unselfish. I just wish that I can get support when I need or deserve one.

In the meantime, life goes on, and still I find myself trying to do the best I can.