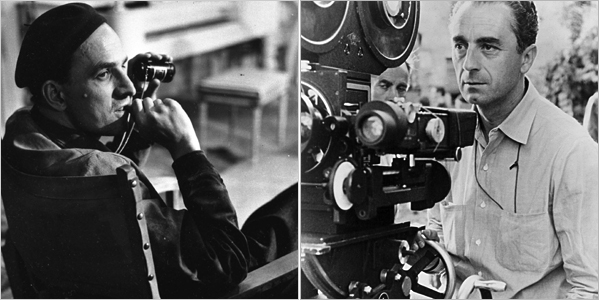 All of cinema is still reeling from the deaths of the two masters, Ingmar Bergman and Michaelangelo Antonioni, on the same day. On my part, I've been watching Bergman's Persona and Antonioni's L'Avventura, El Grido, and The Passenger to mark my own mourning. A.O. Scott, writing in The New York Times, writes a piece, appropriately titled "Before Them, Films Were Just Movies," on the two masters, and on our contemporary approach to them:

Mr. Antonioni and Mr. Bergman, for their parts, were the supreme modernists of world cinema. Mr. Antonioni helped to push Italian film beyond realism, infusing landscapes with psychological rather than social meaning and turning eroticism from a romantic into a metaphysical pursuit. Mr. Bergman, heir to a Nordic strain of modernism represented by Strindberg and Ibsen, developed a film language dense with psychological symbolism and submerged emotion. The two of them upheld, as filmmakers, T. S. Eliot’s observation that “poets, in our civilization, as it exists at present, must be difficult.” L’Avventura and The Seventh Seal, though they have little else in common (apart from exquisite black-and-white cinematography, courtesy of Aldo Scavarda and Gunnar Fischer), are both hard to watch. Not because the content or the imagery is upsetting, but because they never allow the viewer to relax into a conditioned expectation of what will happen next or an easy recognition of what it means.

Scott ends his article on a sad note on our times, however: "... [I]t may be hard for someone who wasn’t there — who never knew a film culture in which La Notte didn’t already exist — to quite appreciate the heroic status conferred on Mr. Antonioni and Mr. Bergman 40 years ago. I don’t believe that the art of filmmaking has necessarily declined since then (I’d quit my job if I did), but it seems clear the cultural climate that made it possible to hail filmmakers as supreme artists has vanished for good. All that’s left are the films." The full article here.